After 33 games, the Timbers sit on the precipice of something big. Over the summer, during the Great Defensive Chaos Days, the Timbers looked more like a team that had no interest in playing in November; road losses to Minnesota United, Colorado, and the abject implosion at home to Real Salt Lake didn't fill many Timber fans with confidence as summer turned to fall.

The Timbers, however, were quietly getting their act together. The signing of Larrys Mabiala and his integration into a very wobbly defense has made that defense a lot more solid. In the 20 games prior to Mabiala's signing, the Timbers started 10 different back fours, and that patchwork mess of a defense conceded 1.55 goals/game. In the 13 games since Mabiala's signing, the Timbers have conceded 1.29 g/gm. Over the course of a season, that's nine fewer goals conceded.

Of course, Mabiala isn't the only reason the Timbers have defended better; Vytas has been one of the most consistent defenders the Timbers have had all season, and the return from injury of Liam Ridgewell has also helped solidify a back line that still sees its fair share of changes (in that 13 game stretch with Mabiala, the Timbers have used at least six different back lines).

A TALE OF TWO HALVES (OF THE PITCH)

All of which is to say that the Timbers are where they are almost despite their defense; this is what happens when you have a legitimate MVP candidate in the attacking half of the field. Watching Diego Valeri do what he does this season has been a singular delight; he's always been good, but this season he has been otherworldly, and is only the second player in MLS history to record 20 goals and 10 assists in a season - with one game to go.

The Timbers wouldn't be anywhere near where they are now if Valeri had produced at his normal great rate, but he has stepped up his game and the Timbers, improbably, are playing for a few Big Things on Sunday.

What are they playing for? Well, last weekend, the Timbers, the Sounders, Sporting Kansas City and the Houston Dynamo locked down a playoff spot, but not playoff positions. The way all those results went was very helpful to the Timbers, and it clarified things pretty impeccably. Here's what happens if:

TIMBERS WIN
No matter what else happens, if the Timbers beat Vancouver, they win the West and they win the Supporters Shield, and they also claim the Cascadia Cup. 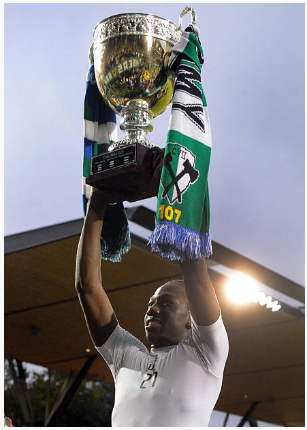 TIMBERS DRAW
This is where things get a little less clear, at least MLS-wise. Anything less than a win and the Sounders get the Cascadia Cup again. As far as the league, If the Timbers draw and the Sounders and Sporting KC both win, the Timbers finish fourth, which is the lowest they can possibly finish. SKC travels to Sandy to play Real Salt Lake, who need to win to make the playoffs at all, and Seattle face an already eliminated Colorado team at home.

If, however, the Sounders and Timbers match results, the Timbers will finish above them and in either third or second, depending on SKC's result.

The Timbers are as near to full health as they've been in a long while, with only Fanendo Adi a doubt. He did train a bit this week, though, so he may be an option as a late sub even if he's not 90 minute fit yet. The Whitecaps are almost fully healthy too, so we should see the best of both teams as first place is being decided, which is all we can ask for as fans.

Seattle Sounders vs Portland Timbers Preview: &nbsp;Battle in the Pacific Northwest 10 days ago