It's not often that you see yellow cards be the deciding factor in major soccer tournaments. In fact, its highly irregular but today, that was the case as Group H needed accumulated yellow cards to decide which teams would advance to the Round of 16. In the Group G, the two teams moving forward at the 2018 FIFA World Cup had already been decided and the games today were all about final placement in the group.

Group H: Colombia, Japan through after a gripping final day

With so much on the line for three of the four teams in the group, no one was entirely surprised by how tentative the matches between Colombia, Senegal, Japan and Poland started out. In the end, solitary goals in both matches determined the fate of the Group H matches. 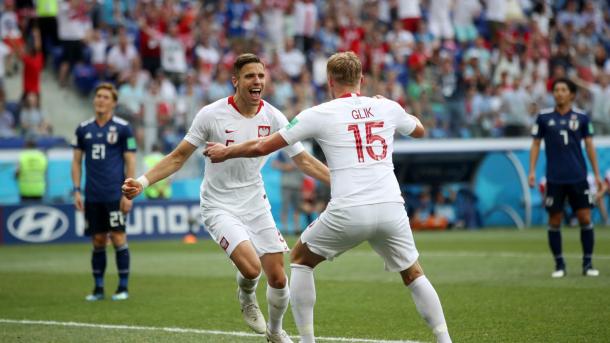 All Japan needed heading into their match against Poland was a draw to book their place in the next round. However, what transpired ended up being one of the more interesting conclusions to the group stages that we have seen so far. The Japanese made six changes to the team that faced both Colombia and Senegal which hampered their overall play. Poland ended up having the best chances of the game and it was through their overall dominance that they found the winning goal in the 59th minute. A free-kick lobbed into the penalty area found Jan Bednarek at the far post and the defender volleyed the ball home from close range. Poland could have and should have scored more but with Japan content to play 'keep ball' for most of the second half due to the result in the other game, Bednarek's goal was all we got to see.

Senegal, like Japan, only needed a draw to make it to the Round of 16 while Colombia needed the win. In the first half, Senegal were the better team and were unlucky not be ahead at the break but you got the feeling that with all of their missed chances, Colombia were going to sucker-punch them at some point. Senegal's lack of cutting edge, after having played so well in the previous Group H matches, hurt them in the end as Yerry Mina found the game-winning goal that Colombia was desperately searching for, especially after James Rodriguez had to leave the game with an injury. A corner lick was floated in by Juan Quintero in the 74th minute and Mina fought off his marker to finish powerfully at the near post. Senegal tried to come back into the game and almost did so two minutes later when Sadio Mané drifted through Colombia's backline before finding a wide open Lamine Sané at the back post but his compatriot volleyed his effort high and wide of the goal from close range. In the end. Mina's goal ended up being decisive and allowed Colombia to advance to the Round of 16.

Due to being level on points with Japan, it came down to which team had the most yellow cards and with Senegal having six to Japan's four, it was the West Africans who had their tournament cut short while Japan moved on. Colombia will now go on to face England while Japan have the unenviable task of playing Belgium in the next round.

Group G: Belgium and England set for the knock out stages

In Group G, Belgium and England had already booked their places in the Round of 16 and all that was left to play for was who would finish first or second between them. In the other group game, Panama and Tunisia battled for nothing but pride as their exists from the competition had already been confirmed.

A host of changes by both sides meant that the overall play by both Belgium and England made for a dull game. Those players in the field however, did their best to try and push themselves into a starting role in the next round as much as they could. England's goalkeeper for the day, Jordan Pickford, was called upon early to prevent Mousa Dembélé and Marouane Fellaini from giving Belgium the lead. At the other end, Ruben Loftus-Cheek could have also put his country ahead in the 34th minute but his header went narrowly wide of the goal. Both sets of fans had to wait until the 51st minute for the opening goal but it was worth the wait. Adnan Januzaj jinxed his way into the penalty area before firing off a curling effort that sailed past Pickford and into the top corner. England did try to come back with an answer but both Phil Jones and Marcus Rashford could not make the most of their chances, handing Belgium their third win of the group and the top spot.

With nothing left to play for, Tunisia put on a show to defeat Panama by two goals to one. Tunisia were in the ascendancy for most of the game but it was the Panamanians who took the lead in the 33rd minute thanks to an own goal by Yassine Meriah. Fakhreddine Ben Youssef then levelled things up again with after a sweeping move that ended with him tucking it home from close range in the 51st minute. The final goal of the game came from Wahbu Khazri who again, after some fine build up play by Tunisia, slotted the ball home from about five yards out to secure the win for Tunisia.

Panama may have finished bottom of the group but for their first ever World Cup, they can be proud of the achievements while Tunisia ended their World Cup journey with some style. England and Belgium will now square off against the two top teams from Group H as they look to prolong their tournament once again.

Columbus Crew SC to rebrand as 'Columbus SC' 8 hours ago

Big Win for Orlando Against Cincinnati 6 days ago
//