6:18 PM9 months ago
We thank you for joining VAVEL for this match.

The champions lift the 2019 MLS Cup

Sounders celebrate after the final whistle

.@SoundersFC finish on top of @TorontoFC to claim their second #MLSCup! pic.twitter.com/wHToxl0vfH

Another one for the trophy case. 🏆🏆@SoundersFC are the 2019 #MLSCup Champions! pic.twitter.com/fBwzLGcsDd

The Sounders win their second MLS Cup!
6:01 PM9 months ago

Pozuelo crosses and Altidore heads it to the back of the net!
6:00 PM9 months ago

Five added minutes to the second half.
5:59 PM9 months ago

Everyone on ther feet as Ruidáiz leaves the pitch. Arrega will come in to close the match.
5:58 PM9 months ago

Ruidíaz outruns an injured Mavinga and finishes it to make Sounders' title a certainty!
5:55 PM9 months ago

Pozuelo with the cross. González reaches it, Frei blocks and then Morrow finds it, but is unable to score.
5:52 PM9 months ago

Crosses begin to rain on Sounders' box, but Torres and Kim are competing well.
5:50 PM9 months ago

Omar González is now playing a striker trying to use his height to win balls up high.
5:47 PM9 months ago

Good ball for Ruidíaz by Lodeiro, but the striker is just offside!
5:46 PM9 months ago

This was Rodríguez goal for the 2-0

Rodríguez is out, replaced by Laryea
5:44 PM9 months ago

Rodríguez plays to Lodeiro who passes it back on the first touch. Classy finish with a finesse shot to the far post!
5:43 PM9 months ago

Mavinga seems to be hurting after the play with Kim, but refuses to be subbed out!
5:42 PM9 months ago

Seattle begins to create more offense. This time a shot by Morris is deflected towards corner kick.
5:40 PM9 months ago

Omar González and Westberg don't communicate and the defender almost scores an own goal.
5:40 PM9 months ago

Pozuelo is carded after fouling Lodeiro from behind.
5:37 PM9 months ago

Roldán strikes from a distance, but Westberg is in position to save it.
5:36 PM9 months ago

First ball looking for Altidore, but Kim does well to intercept.
5:35 PM9 months ago

Benezet is replaced by Altidore!
5:34 PM9 months ago

Mavinga attemps to make run and surprise Sounders' deffense, but Kim slides to stop him from making any progress.
5:31 PM9 months ago

DeLeon will take Endoh's place on the field.
5:29 PM9 months ago

A look at the goal that has Seattle in front!

Rodríguez is on, while Smith leaves the pitch.
5:28 PM9 months ago

Good cross from Pozuelo, but Torres is there to head it out!
5:26 PM9 months ago

Leeerdam strikes off-target but it rebounds on Morrow and it ends up in the back of the net! Seattle leads!
5:24 PM9 months ago

Delgado with a low cross just a bit too long for Pozuelo!
5:22 PM9 months ago

Spectacular dribbling by Pozuelo. He sends a through ball that almost leaves Osorio one-on-one with the keeper!
5:19 PM9 months ago

Benezet with a shot, but it's once again Leerdam with the clearence!
5:18 PM9 months ago

Auro with a good cross, but Leerdam clears it!
5:18 PM9 months ago

The last chance of the first half almost turned into a goal by Ruidíaz!

Frei's amazing save to stop Benezet from putting Toronto in front!

In a very hard fought match, Toronto has been dominating but it was Seattle Sounders who had the clearest chance to score.
4:56 PM9 months ago

Ruidíaz gets to a ball before González. This first touch leaves hime one on one with the keeper. His shot is just saved by Westberg!
4:55 PM9 months ago

Seattle is defending with ten men. They try to play long balls to Ruidíaz as soon as they recover, but González  and Maving are close to the Peruvian and disposses him quickly.
4:51 PM9 months ago

Toronto looks better in the last ten minutes. All balls are recovered by the midfield line and the game is played in Seattle's half.
4:49 PM9 months ago

Benezet dribbles, plays it to Pozuelo and continues his run. The returned ball is intercepted by the defense!
4:47 PM9 months ago

Good strike from Benezet. Frei dives, gets his left arm out and saves his team from conceding!
4:45 PM9 months ago

Seattle keeps crossing it and Toronto continues to defend with their very tall defenders. We've had 8 corner kicks for Sounders so far.
4:42 PM9 months ago

Svensson finds a chance to shoot, but once again the deffense gets there to block it.
4:42 PM9 months ago

Smith crosses looking for Ruidíaz, but Bradley just gets there by sliding. We'll have corner kick for Seattle.
4:41 PM9 months ago

Now Toronto have trouble finding their three men up top, with their passes are a little too long each time.
4:36 PM9 months ago

Shot by Bradley is off-target.
4:36 PM9 months ago

Seattle now looking to use speed to cause trouble in Toronto's goal, but their last pass is lacking precision.
4:32 PM9 months ago

Roman Torres shoots with his left after a cross form Lodeiro but it's just over the bar!
4:32 PM9 months ago

Smith fights a ball and wins it. Lodeiro has a chance to send a dangerous cross, but can't find a teammate.
4:29 PM9 months ago

New cross looking for Ruidíaz. His header is too high to worry Westberg.
4:29 PM9 months ago

Long ball looking for Ruidíaz. As he looks to strike, Mavinga uses his strength to clear it.
4:26 PM9 months ago

Low-cross from Benezet, but Svensson sends it to corner before a Toronto player could strike.
4:22 PM9 months ago

Benezet plays a ball to Osorio who shoots, but the ball is straight at Frei's position.
4:21 PM9 months ago

Lodeiro attemps a cross, but he fails to contact it correctly and the chance is wasted.
4:20 PM9 months ago

Morris recovers on midfield and runs toward goal. With Omar González marking him, he strikes and Westberg responds well.
4:18 PM9 months ago

Toronto begin the game with more possession. The game is played mostly on Seattle's half as the Sounders look to build a good counter attack.
4:15 PM9 months ago

Cross from Endoh that crosses the whole Box. Benezet shoots and Frei controls it.
4:10 PM9 months ago

The crowd roars as Seattle Sounders move the ball! We're underway in the 2019 MLS Cup!
4:10 PM9 months ago 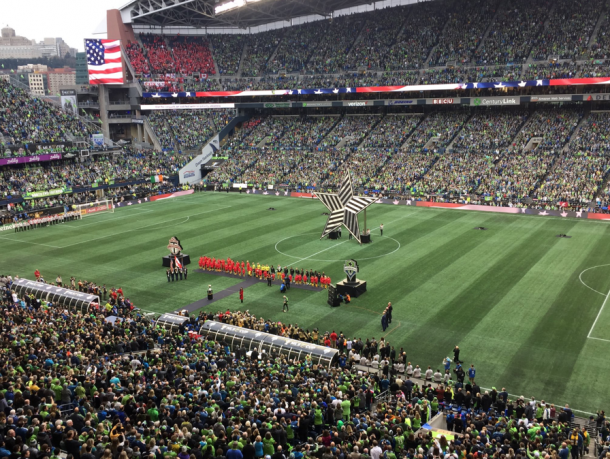 The teams make their way onto the pitch!

The teams are finishing up their warm ups!

3:59 PM9 months ago
Here's a stadium perspective from the position occupied by Toronto FC's supporters. 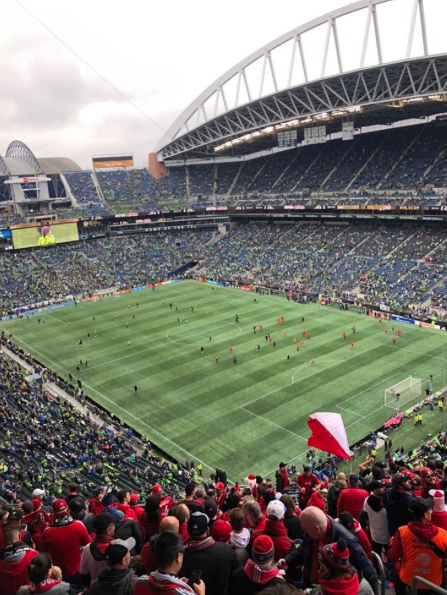 The matchball is ready for the MLS Cup! 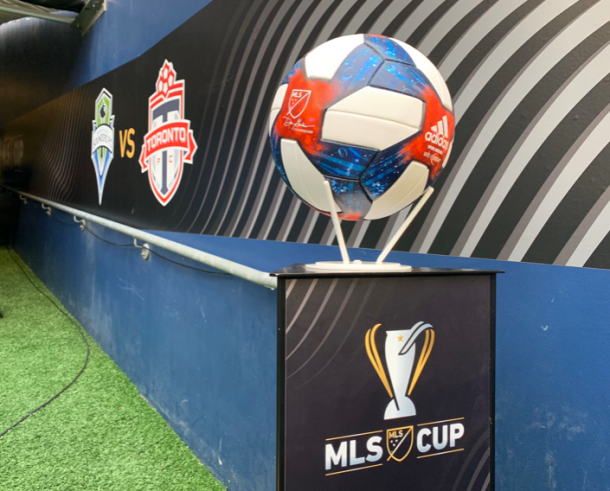 Great atmosphere in the stadium!

Century Link Field's iconic towers at the ends are dressed up accordingly! 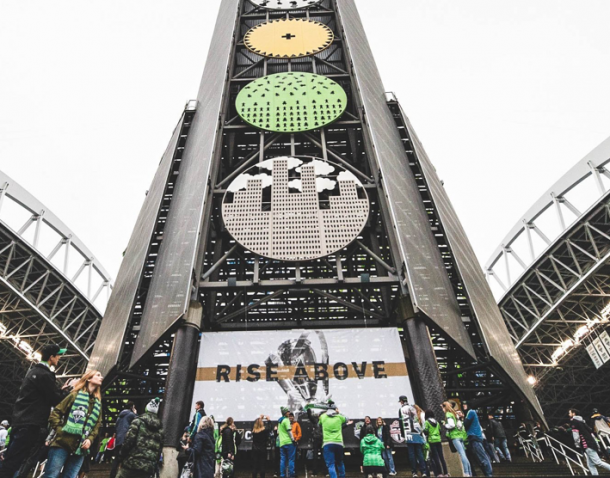 Sounders doing their warm up!

As the fans fill in almost 70 thousand seats, Seattle Sounders make their prematch warm up! 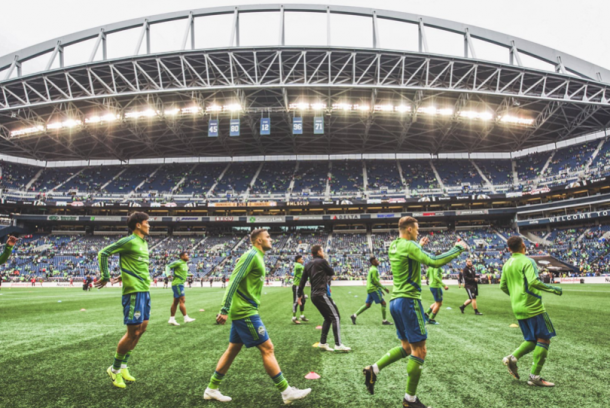 The stadium at Seattle is starting to fill up! 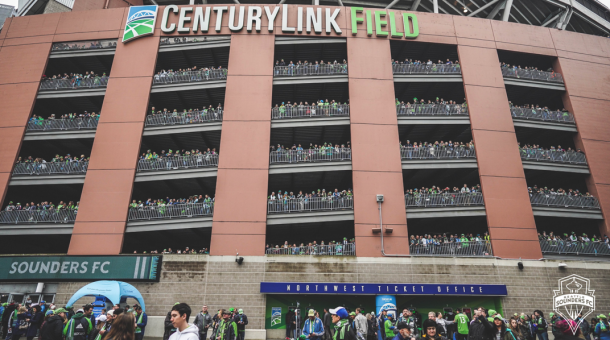 The Toronto FC players look totally focused on bringing the trophy back home. 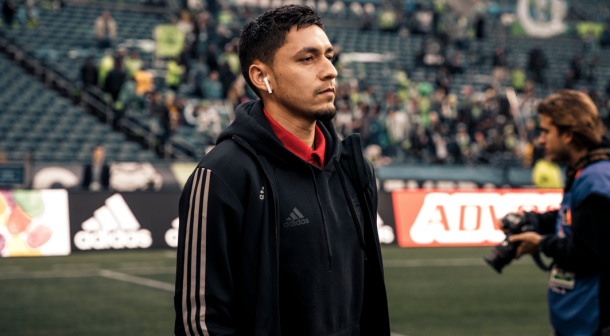 Does it get better than this? 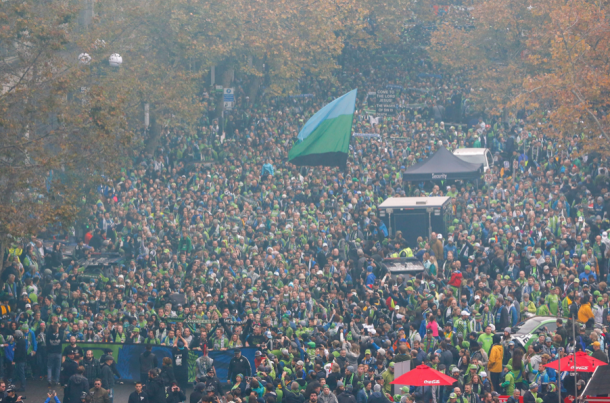 About 3,000 Toronto FC fans made the trip to Seattle with hopes of seeing their team reach another title.

They were placed on the upper deck of Century Link Field. 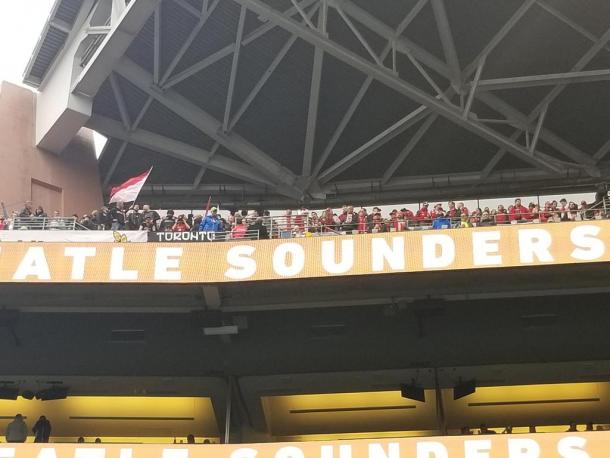 We're in for a historic match! Who you got as the MLS Cup winner? 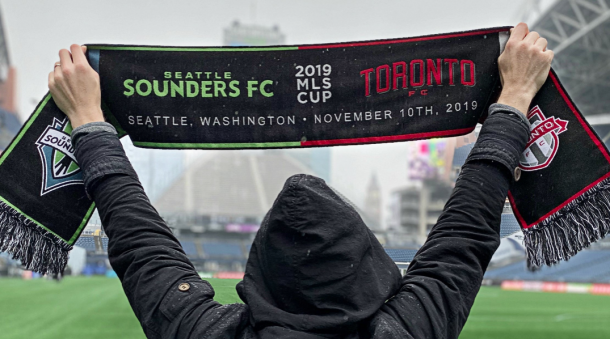 Century Link Field is set to host the MLS Cup

The setting for today's MLS Cup is nothing short of spectacular! 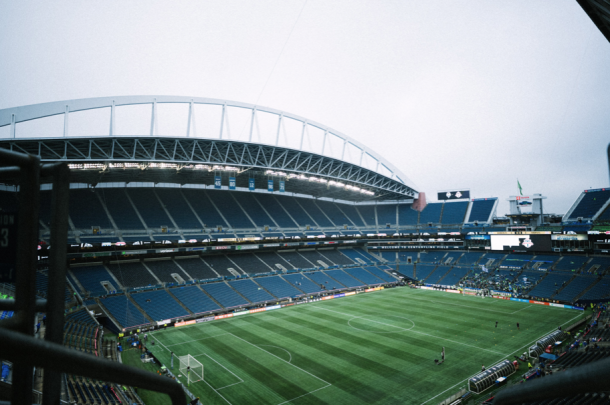 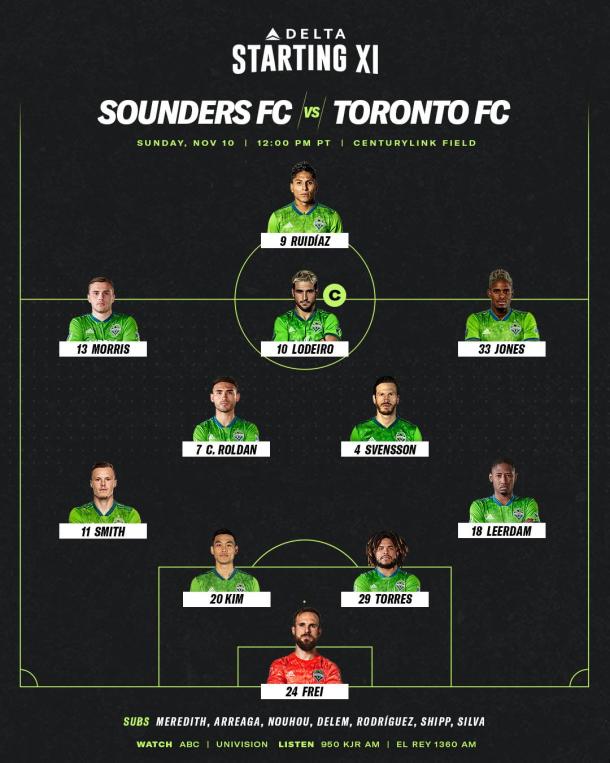 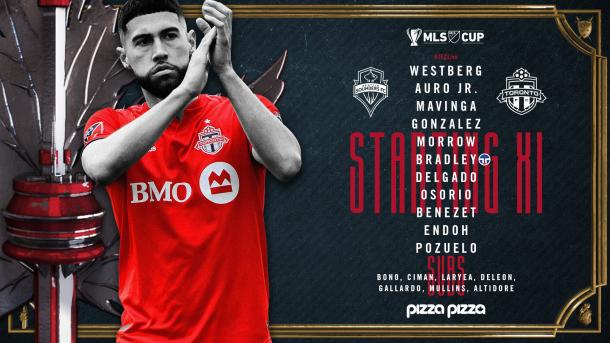 Amazing support from Seattle for their team ahead of their match against Toronto FC!

A March to the Match unlike any other. #MLSCup pic.twitter.com/RzpfimKNAO

The party is lit!

Seattle's Macklemore sings "Can't Hold Us" as part of the festivities prior to the MLS Cup!

Seattle is tinted in green and blue!

The Sounders' home town is full of fans wearing their colours to show their support as their team looks to win a second MLS Cup. 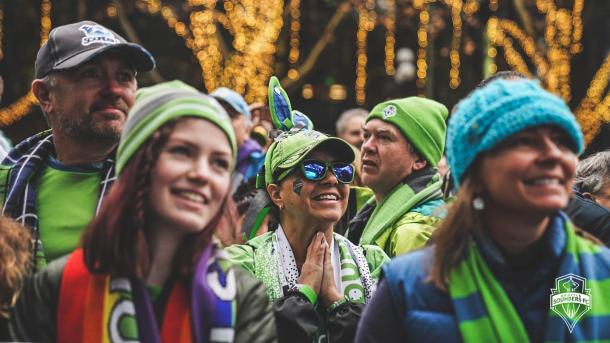 The Canadian side took a minute to recognize the pitch in which they'll fight for the MLS Cup and greeeted the fans that made the trip all the way from Toronto!

In just an hour, we'll have the match that determines the champion of Major League Soccer: The MLS Cup!

Don't go anywhere! We have all the information you need LIVE from Seattle!
8:21 PM9 months ago

Do not miss a detail of the match with the live updates and commentaries of VAVEL. Follow along with us all the details, commentaries, analysis and lineups for the 2019 MLS Cup: Seattle Sounders  vs Toronto FC.
8:21 PM9 months ago

With 2 World Cups and 9 years of European experience under his belt, Bradely is without a doubt one of Toronto's important men.

A midfielder with great positioning and strong leadership, he is able to make a difference when it comes to destroying enemy attacks and starting Toronto's offensives. 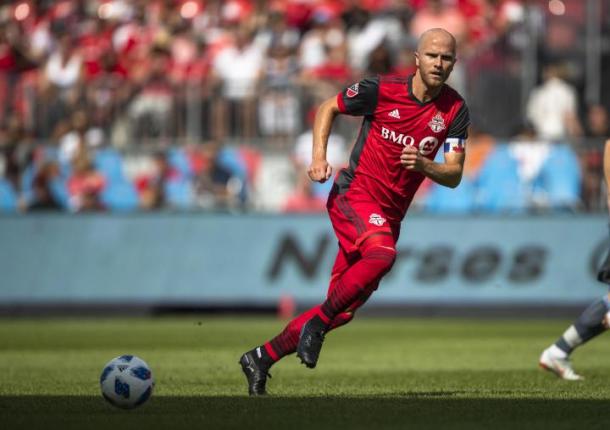 A world-class striker is the correct form to describe Sounders' number 9.

The Peruvian has great technique and is able to find a way to score even in the most difficult matches. His quality is without a doubt as he has shown in MLS, Liga MX and his national team. 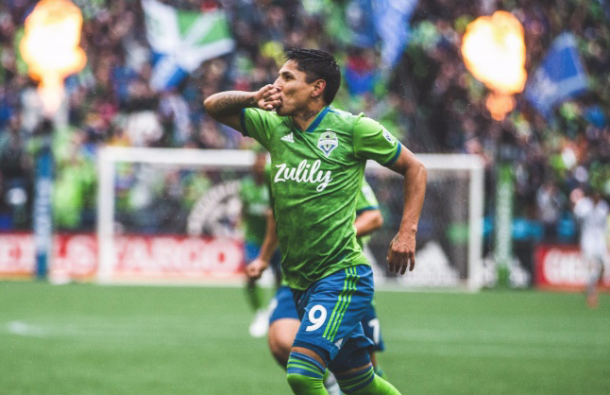 If you want to watch the game on TV, your options are: ABC and Univision.

For the second time in its history, Century Link Field will host the MLS Cup.

The game is sold out with an expected total of 69,000 fans in attendance.  An estimated 3,000 Toronto FC supporters will make the trip. 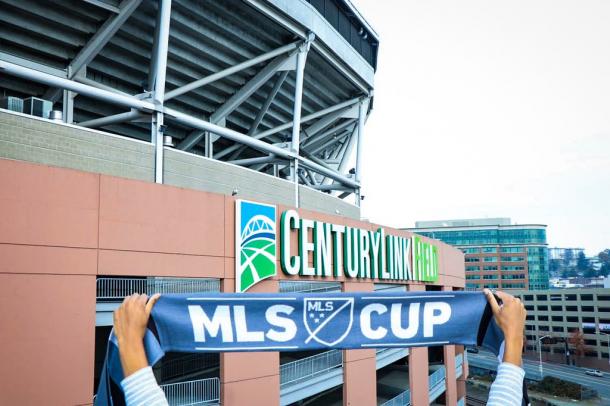 Allen Chapman has been announced as the ref for the 2019 MLS Cup. This will be the second time he works the championship game after he was involved in the 2017 edition betwen the same teams.

Brian Dunn and Corey Rockwell will assist him.

Toronto knocked out the defending champions

In the Eastern Conference Final, Toronto was off to a difficult start. They went down in the scoreboard and then conceeded a penalty before the tenth minute of play.

The turning point of the match came when Joseph Martínez's shot from the spot was denied by Westberg. Benezet equalized and a magnificent strike by DeLeon marked the return to the final for Toronto FC.

The Sounders were hosted by Supporter's Shield winner, LAFC, in the Western Conference Championship game.

Despite being down on the scoreboard early in the match, a great comeback led by Raúl Ruidíaz saw the final score end in a 3-1 for Seattle.

The third time in four years!

Today marks the third time the MLS Cup will be contested between these two teams in the last four years.

The two previous finals were played at Toronto's BMO Field with one title win per side.

Orlando City SC vs LAFC preview: Black and Gold favorites to advance to semi-finals?9 days ago

Goals and Highlights: Philadelphia Union 1-0 New England Revolution in 2020 MLS is Back Tournament15 days ago

Goals and Highlights: Orlando City 1-0 Montreal Impact in 2020 MLS is Back Tournament15 days ago

Seattle Sounders vs LAFC MLS Is Back knockout preview: Can resolute Sounders hold on against Bradley's free-scoring LAFC?13 days ago

A Look at Orlando City's Road to the Final17 days ago
Restore your password
Please enter your user name or email.
Login Member or Writer Panel
Enjoy your own Customized Newspaperwith VAVEL topics' carousels!