Seattle comes out on top after an eventful 2nd half. 2 goals from Jordan Morris save the champions from a surprising defeat on the opening day of the season.
6:21 PM3 months ago

Chicago continues to look for the equalizer.
6:20 PM3 months ago

They did not capitalize
6:18 PM3 months ago

A free-kick for Chicago in a wide position. Can they capitalize?
6:18 PM3 months ago

Seattle is in total control of the ball to start the added-on time. No chances as of yet.
6:16 PM3 months ago

There are six minutes of time added on
6:15 PM3 months ago

Off the post! Morris gets put through on the left side but he has to slide to keep the ball in play. The slow-rolling ball is trickly back-heeled by Ruidiaz into the post and out of play.
6:14 PM3 months ago

A series of corners lead to nothing for the Fire.
6:08 PM3 months ago

Some strong running down the left from Collier gets him past his defender and his shot to the back post gets saved from Frei.
6:07 PM3 months ago

Joao Paulo given a yellow card for arguing with the ref Update: It is Jordy Delem who gets the yellow card, not Joao Paulo.
6:05 PM3 months ago

A dangerous cross goes towards Morris but his header is blocked for a corner. The corner results in a clearance from Chicago.
6:04 PM3 months ago

Chicago has control of the ball right now but they can't find that killer pass.
6:03 PM3 months ago

ON: Harry Shipp OFF: Miguel Ibarra
6:02 PM3 months ago

Collier takes a shot that forces Frei into a good save.
5:58 PM3 months ago

It's Ruidiaz' turn to miss an open net. Morris chips the ball for Delem who passes the ball past the onrushing GK to Ruidiaz who has a tap in but he fluffs his lines.
5:58 PM3 months ago

After a strong start to the half, the Chicago Fire hasn't been able to keep hold of the ball at all. Seattle has really taken control of the game.
5:54 PM3 months ago

Play has resumed after Herbers and Delem receive treatment.
5:52 PM3 months ago

A crunching tackle has left a player from each team on the ground injured.
5:51 PM3 months ago

Pineda lines up a shot from just outside the 18-yard box but it goes high and wide.
5:49 PM3 months ago

Jordan Morris decided to put it in himself! Roldan puts in a dangerous low ball and Jordan Morris just gets ahead of Bronico to put the ball into the back of the net.
5:47 PM3 months ago

Another Jordan Morris cross from the left-hand side ends up in the path of Miguel Ibarra who really needs to score there. It was a wide-open net and the American's shot went well over the bar.
5:45 PM3 months ago

Roldan's goal has been ruled out for offside after the VAR check.
5:43 PM3 months ago

Goal for Christian Roldan after a low cross from Jordan Morris! Update: the referee has gone to the VAR monitor.
5:41 PM3 months ago

A poor clearance from the Chicago GK leads to a Seattle chance. Luckily for him, his defense bails him out and he's able to get a hold of the loose ball from Seattle's attack.
5:40 PM3 months ago

Play resumes after an injury to a Chicago player
5:37 PM3 months ago

Seattle try to react instantly but the attack gets cleared by Chicago.
5:34 PM3 months ago

Robert Beric fires Chicago Fire in front (pun intended)! A long ball is chested down by Mihailovic to Beric who sends his hard shot into the back of the net only 45 seconds into the second half.
5:31 PM3 months ago

The second half has kicked off.
5:30 PM3 months ago

Seattle 0 - 0 Chicago. Raphael Wicky will be happy with his side's performance in the first half.
5:15 PM3 months ago

A good one-touch passing move leads to a shot from Bronico. He skies it though and a goal kick is the product.
5:14 PM3 months ago

The half seems to be winding down. Not a lot of big events happening at the moment. Lots of little fouls over the last 10 minutes.
5:12 PM3 months ago

Three minutes of time has been added on at the end of the half.
5:11 PM3 months ago

A cross from Frankowski gets deflected out for a corner. Nothing comes from it.
5:08 PM3 months ago

Interesting stat: Chicago has never won away to any of the Cascadian teams (Seattle, Portland, and Vancouver).
5:06 PM3 months ago

Chicago has been the better side but Seattle has still been dangerous in transition. This is shaping up to be an interesting game.
5:04 PM3 months ago

A good move from Chicago leads to a shot that is parried by Frei. The rebound is bundled in by Mihailovic but he was offside. The goal is ruled out.
5:02 PM3 months ago

It's Arreaga's turn to take a shot from way too far out. His shot rolls out for a Chicago goal kick
5:00 PM3 months ago

A counter-attack starting from a Paulo tackle ends in Kronholm taking the ball off of Paulo's feet.
4:58 PM3 months ago

Seattle is clearly struggling from a CCL hangover at the moment. They have had a poor start to the game. Chicago has also made it difficult for them with their promising start.
4:57 PM3 months ago

A goal from Robert Beric is ruled out for offside.
4:55 PM3 months ago

Robert Beric takes a shot from long range but it goes just wide the target.
4:52 PM3 months ago

A point-blank save from Kronholm! The ball bounces around in the box and a shot from Ruidiaz deflects to Ibarra, who's shot gets saved from point-blank range. The ensuing corner has a header from Ibarra that goes just wide.
4:49 PM3 months ago

Joao Paulo sends Delem down the left side but a one-two with Roldan ends with Roldan slightly overhitting his through ball and the ball gets cleared for a corner. Nothing comes from the corner.
4:47 PM3 months ago

An optimistic shot from Kappelhof slowly rolls out of bounds for a goal kick
4:44 PM3 months ago

Chicago is dominating possession right now with the Fire seeing 68% of the ball.
4:42 PM3 months ago

Mihailovic opens his body to hit a ball first time but his shot goes well over
4:40 PM3 months ago

Frankowski sends in a dangerous cross that gets punched clear by Frei.
4:38 PM3 months ago

Play resumes after Kappelhof had to be attended to for an injury.
4:37 PM3 months ago

Ibarra tries to chip the goalkeeper who was out of his six-yard box but he doesn't quite get the elevation that he needed.
4:37 PM3 months ago

Cross sent in by Medran gets chested down from a Seattle player into the welcoming arms of Stefan Frei
4:35 PM3 months ago

Kelvin Leerdam's header off the corner goes well over.
4:32 PM3 months ago

We resume play after Paulo took a boot to the face from Beric.
4:31 PM3 months ago

Leerdam crosses well into the box and the Ibarra shot forces a point-blank save from Kronholm.
4:29 PM3 months ago

A good passage of play from Chicago to start the game but the final cross goes out for a goal kick.
4:27 PM3 months ago

We are live! Make sure to stick around for updates on the match.
4:26 PM3 months ago
And there's the new banner for the champions!

The Champs Are Back! @SoundersFC pic.twitter.com/aJZ5ipfzr2

4:25 PM3 months ago
A lovely trophy presentation from Seattle Sounders just now.
4:19 PM3 months ago
ESPN is currently showing an NCAA Men's Basketball game so that is probably why the pregame is where it is.

🚨 Pregame coverage of #SEAvCHI starts NOW on ESPNews and will switch to ESPN before kickoff. 🚨 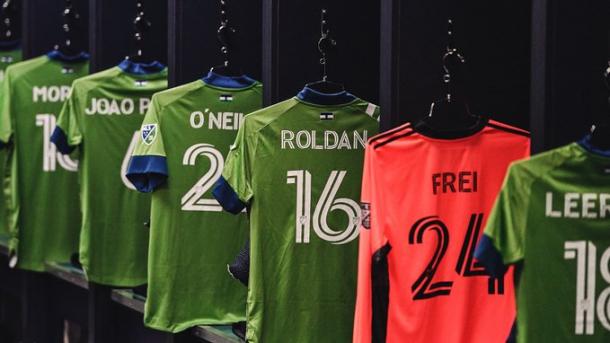 3:34 PM3 months ago
The Seattle Sounders are keeping a close eye on the current coronavirus outbreak situation and have installed a good number of hand sanitizer stations to help.
3:28 PM3 months ago
The Chicago Fire has also arrived at Century Link Field hoping to score a victory.

Will they crash the Sounders' party?

Pullin' up to crash their party. pic.twitter.com/7KSjGKG6P8

3:23 PM3 months ago
The current holders of the MLS Cup have arrived to their home ground to play this first regular season match against the Chicago Fire. 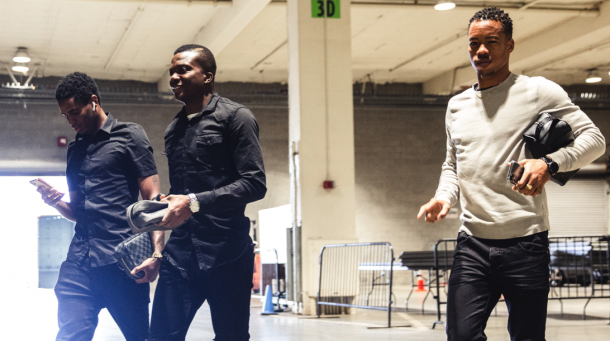 Their last season was quite poor and left them without playoff chances. Today will be a good test to see what their chances are.

3:18 PM3 months ago
The Seattle Sounders were eliminated from the CONCACAF Champions League by Olimpia in a penalty shootout at Century Link Field.

Can the MLS Cup champions rally back and start their league campaign with a win?

In 15 regular-season meetings, Seattle has won 8 games while Chicago has won only 2. The remaining 5 ended in draws. Seattle will hope that history is on their side today.
2:59 PM3 months ago
Do not miss a detail of the match with the live updates and commentaries of VAVEL. Follow along with us all the details, commentaries, analysis and lineups for this Seattle Sounders vs Chicago Fire match.
5:23 AM3 months ago

If you want to watch the game on TV, your options are: ESPN, ESPN Deportes USA.

If you want to directly stream it: WatchESPN, ESPN Deportes+ USA.

Similar to their opponents, there are no injuries to report for the Chicago Fire. However, they have signed a lot of players very close to the start of the season, so expect a big-name player to be on the bench. Chicago fans will be wishing for a relatively injury-free season for the team.
5:16 AM3 months ago

By the looks of it, Seattle has a clean bill of health to start the new season. The Sounders fans will be hoping that the injury bug does not come around this season. If it does, any potential success could be in doubt.
5:11 AM3 months ago

The Chicago Fire basically hit the reset button this offseason. They moved back to Soldier Field, they hired a new coach, they changed their logo, and they got rid of all three of their DPs. The fans will hope that the total restart will be the catalyst for future success.
5:07 AM3 months ago

A repeat on the cards?

Seattle was the MLS Cup Champions last year, yet somehow they've improved their squad. With the key additions of Joao Paulo and Yeimar Gomez Andrade, the sky is the limit for the 2019 champs. Will the fans see a repeat this year or will another team take Seattle's thrown?
5:00 AM3 months ago

My name is Gavin and I’ll be your host for this game. We will provide you with pre-game analysis, roster updates, and news as it happens live here on VAVEL.

MLS Suspension a Blessing in Disguise for Orlando?2 months ago

Luis Nani: Return of the DP3 months ago

From Western Russia to the United States: A Tale of Two 'Byki'3 months ago