What a mistake! Vargas takes a chance and ends up sending the ball over Simon's goal.
2:41 PMa month ago

Goal Spain! Gerard Moreno shoots towards the top of the goal and Sommer can't do anything, Spain takes the lead.
2:40 PMa month ago

Stopped by Simon! Akanji sends the ball right to Simon, and the goalkeeper duel is interesting in this shootout.
2:39 PMa month ago

Sommer saved it! The Swiss goalkeeper dives and saves the shot that was going straight to the back by Rodrigo.
2:39 PMa month ago

Stopped by Simon! Schar sent his shot, but the attentive goalkeeper dives towards the shot and saves the ball, tying the series.
2:37 PMa month ago

Goal Spain! Olmo's excellent finish that ends up in the back of the net.
2:37 PMa month ago

Switzerland's goal! Graranovic scores the first for Switzerland and puts them ahead after Busquets' mistake.
2:36 PMa month ago

What a mistake! Busquets sends his shot to Sommer's post and Spain misses the first one.
2:31 PMa month ago

It's over! The match is still tied and will end up being decided from eleven penalty kicks.
2:30 PMa month ago

Change from Spain. Rodrigo enters and Pedri leaves the match.
2:28 PMa month ago

Good intervention by Laporta, who ends up saving with his head a dangerous ball from Switzerland.
2:25 PMa month ago

What a move! Shots from Llorente, Alba and Olmos, but the attentive Swiss defense ends up keeping the ball out.
2:20 PMa month ago

A pass to Llorente, who fails to finish well and ends up wasting a clear opportunity.
2:15 PMa month ago

At the end of the first overtime, the teams are still not hurting each other.
2:12 PMa month ago

Oyarzabal's strong shot from outside the area, but Sommer ends up keeping the ball.
2:06 PMa month ago

Change of Switzerland. Zakaria and Widmer come off, Schar and Mbabu take their places, looking to shore up the Swiss.
2:03 PMa month ago

Uff! Dani Olmos came close to scoring, but the ball ended up crashing into Moreno and the ball didn't go in.
1:58 PMa month ago

Moreno's cross ends up stumbling and misses the second, sending the ball wide.
1:58 PMa month ago

The meeting is over. The match ended in a tie and overtime is about to begin.
1:51 PMa month ago

Akanji stopped well and ended up taking the ball away from Azpilicueta.
1:50 PMa month ago

Changes in Spain and Switzerland. For the Spaniards Koke comes off and Llorente takes his place. For Switzerland, Fassnacht comes on for Zuber.
1:49 PMa month ago

Action resumes, Alba recovers and continues in the match.
1:46 PMa month ago

Jordi Alba is left lying on the grass after a blow.
1:44 PMa month ago

Good intervention by Vargas, avoiding the dangerous arrival by Switzerland.
1:34 PMa month ago

He's leaving! Switzerland are down to ten men after Freuler's tackle on Gerard Moreno.
1:32 PMa month ago

Good intervention by the defense, preventing Moreno from shooting at Sommer's goal.
1:26 PMa month ago

Switzerland's goal, Shaqiri ties the match! After a cross, the striker shoots and the ball goes under Azpilicueta's legs, Simon can't do anything.
1:23 PMa month ago

Close! Headed shot by Zakaria, the Spanish defense moves and the ball goes slightly wide of the goal.
1:11 PMa month ago

Change from Spain. Álvaro Morata comes off for Gerard Moreno.
1:07 PMa month ago

Excellent cross from Olmo, which Koke tries to finish, but ends up sending the ball into the stands.
1:04 PMa month ago

The second half kicks off in Krestovski. Switzerland will be looking to take the lead.
1:03 PMa month ago

Change of Spain. Dani Olmo replaces Sarabia, who came off with discomfort.
12:48 PMa month ago

At the end of the first half, with Alba's goal, Spain is up on the scoreboard by the minimum.
12:43 PMa month ago

Sommer is left untroubled by a cross from Sarabia.
12:41 PMa month ago

Widmer gets up inside the box and shoots, but the ball goes over the goal.
12:35 PMa month ago

Uff! Widmer arrived to rebound, but Busquets was attentive and prevented the play from growing.
12:26 PMa month ago

Goalkeeper! Excellent shot from Azpilicueta, but Sommer is attentive to keep the ball out of his net.
12:23 PMa month ago

Switzerland have made a substitution. Embolo cannot continue in the match and Vargas takes his place.
12:22 PMa month ago

Sarabia's cross is cleared out of the box by the defense, Spain are looking for their second.
12:21 PMa month ago

Spain's goal! Jordi Alba volleys in from outside the area, but there is a deflection and the ball ends up in the back of the net.
12:20 PMa month ago

The match kicks off at the Krestovski Stadium, where both teams will be looking for a win.
12:20 PMa month ago

Both teams are already warming up ahead of the duel that will take place at the Seferovic Stadium.
11:45 AMa month ago 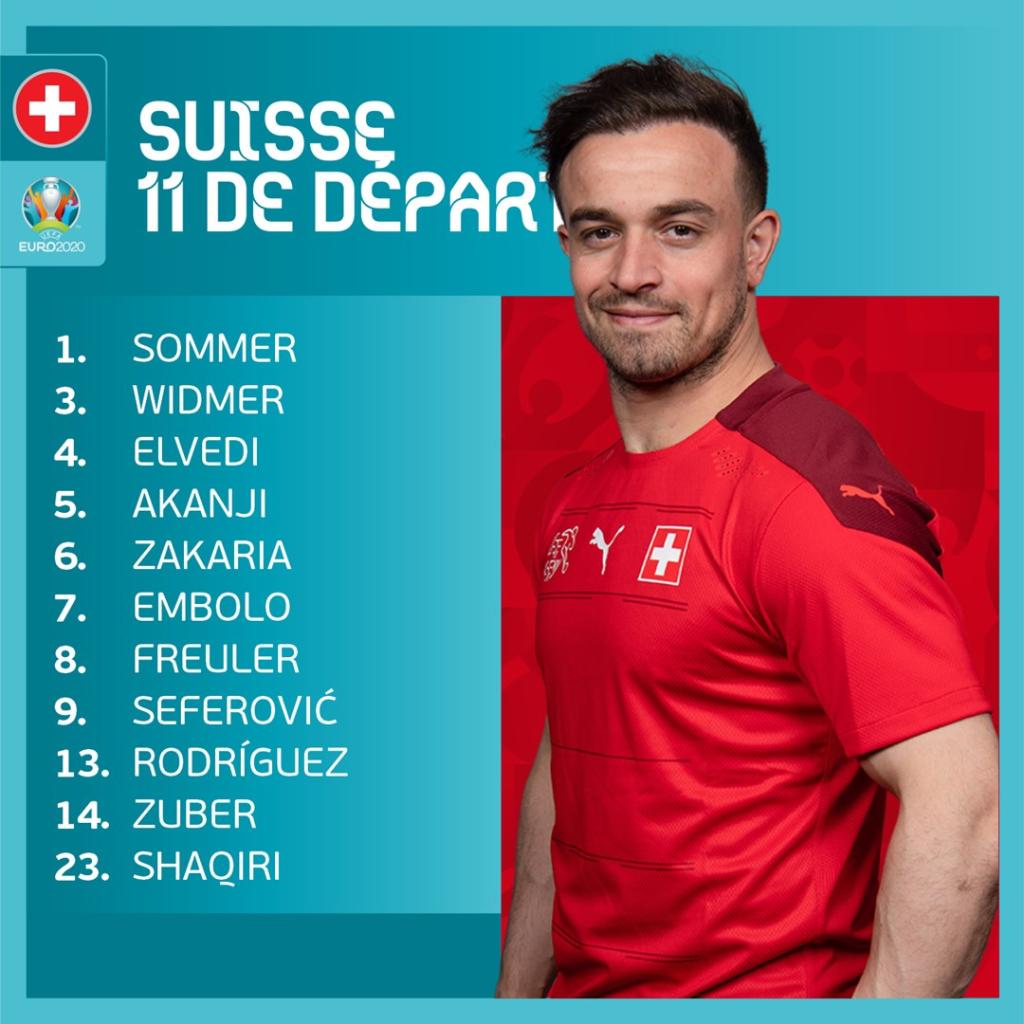 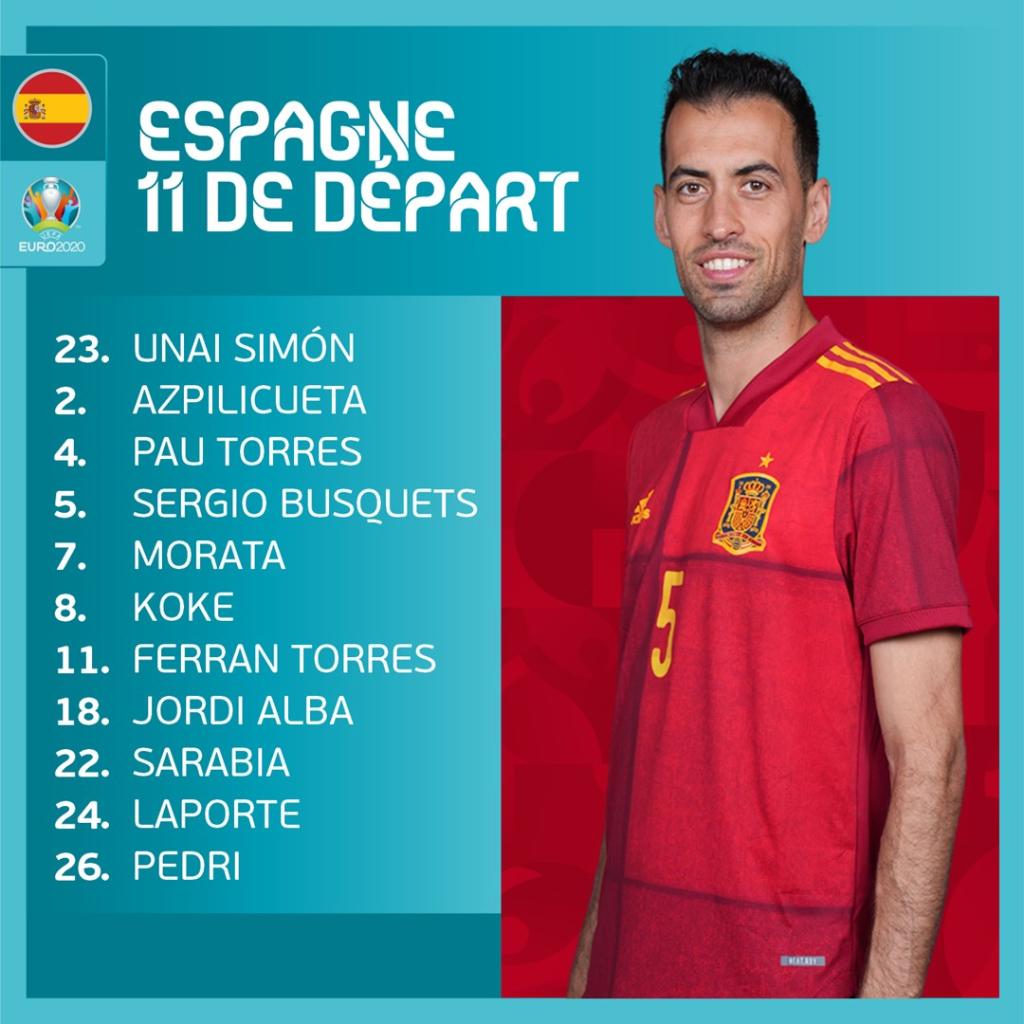 He is looking to continue writing his story!

The current coach of Spain is looking to continue in the Euro and thus continue the history of success at the helm of the Spanish national team.
11:31 AMa month ago

Prior to this duel, Enrique stated that Petkovic is a high level coach, he knows that there will be problems generated by the Swiss; as they are difficult to beat and go for everything.
11:29 AMa month ago

No margin for error!

In this duel, whoever fails is out. This is something that both teams know, so they will be looking to be the one who makes the fewest mistakes in order to continue to the semifinals of the tournament.
11:22 AMa month ago

With Shaqiri and Seferovic at the helm, Switzerland wants to continue making history at Euro 2020.
11:17 AMa month ago

The Spaniards are already at the Krestovski Stadium, with their dressing room ready to face Switzerland this afternoon. A duel where the Spaniards will leave everything and seek to continue qualifying. 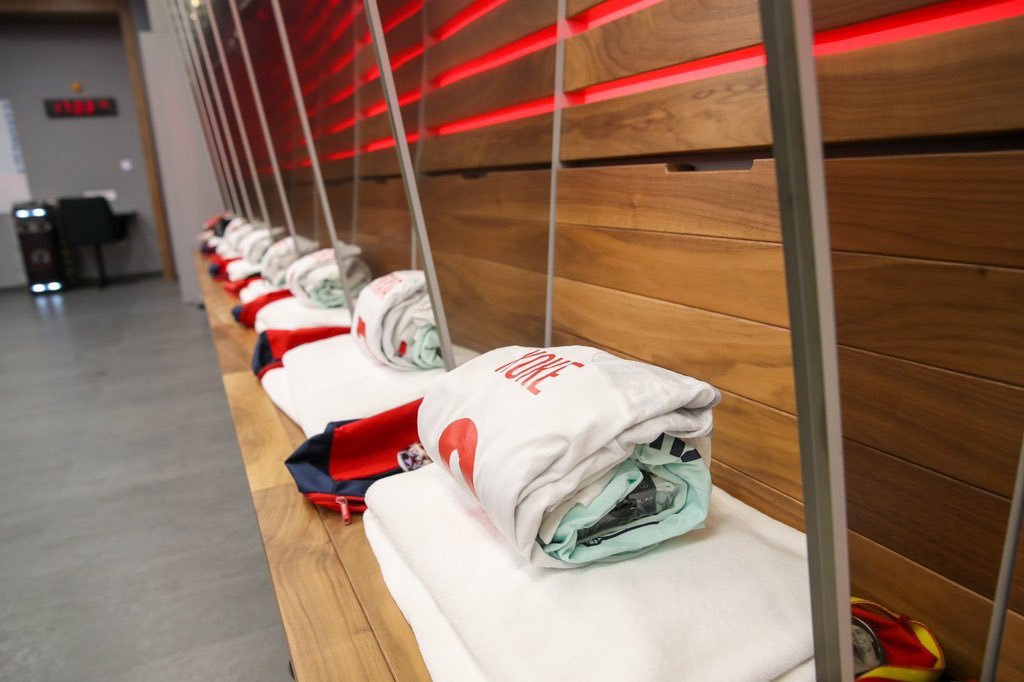 Stay tuned, in a few moments we will share with you the lineups, as well as the most relevant information from the Krestovski. Do not miss a detail of the match Spain vs Switzerland live updates and commentaries of VAVEL.
11:07 AMa month ago

Switzerland proud of their team

Captain Granit Xhaka declared that all Swiss can be very proud: "We made history against France. I'm very proud to be part of this team. We can dream. We are still in the tournament. Now we have a different opponent in Spain; we know them, we played against them a few months ago, but we need the same character, the same fighting spirit we showed against France." 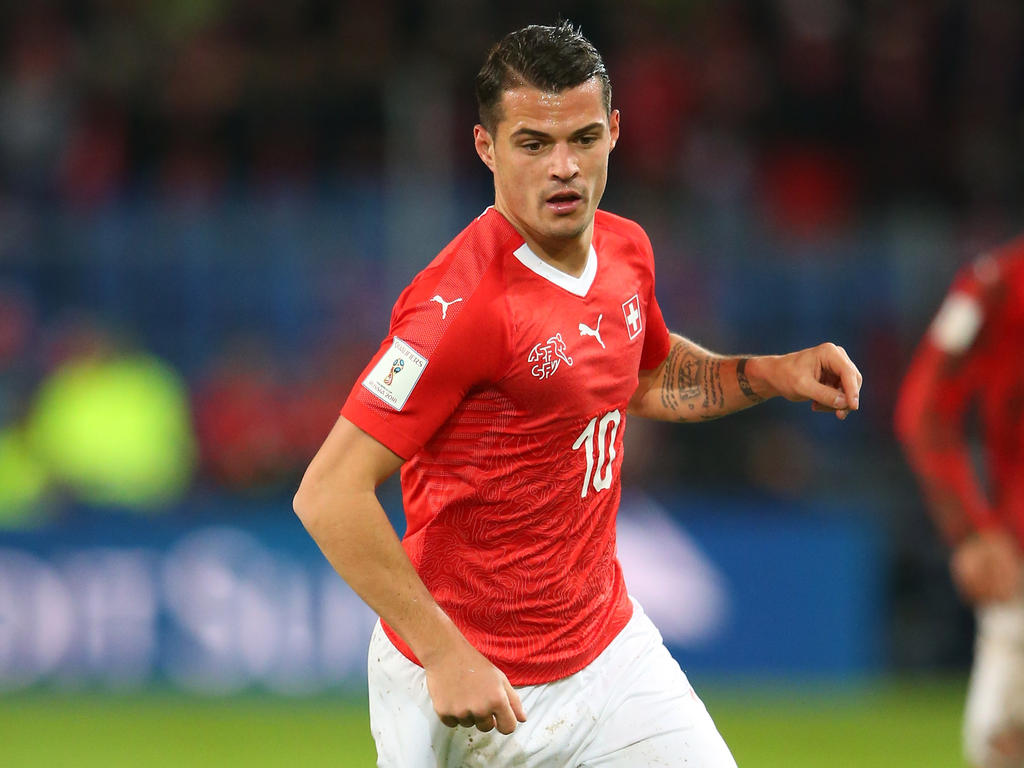 After qualifying, Vladimir Petkovic said in conference: "We have to be hungry to go to the next round. As of this moment I can't say I'm satisfied, because for me the next step is always the most important one. We want to advance to the next round, even if we face one of the favorites, Spain".
10:57 AMa month ago

Aymeric Laporte, Spain's defender, also had a few words to say after the victory: "I don't know if we are favorites. We have a very good team and we have shown it in recent matches. It's very difficult to beat us and we've been doing well in several games. We're hungry for more. 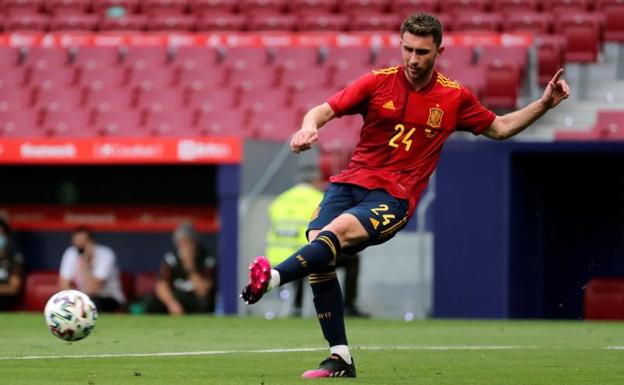 Prior to the clash, Luis Enrique, coach of the Spaniards, said of their opponents: "The reality is that Switzerland have gone through and the rest is unimportant. The luck or misfortune is that we both know each other well because we played against each other in the Nations League. It's going to be very complicated. As a block they are one of the best in the European Championship, at our level, because of how they press and attack".

At the same time, he mentioned that he still does not know if there will be changes in his starting eleven, although he argued that he trusts everyone with his eyes closed, so there could be a possibility of a change.

Despite qualifying, Switzerland does not have a good omen for this duel, after receiving his second yellow card, midfielder Granit Xhaka, who has been a key player in Vladimir Petkovic's scheme and current captain of the national team, will not be able to play in this difficult duel for the Swiss.
10:32 AMa month ago

To keep on climbing

Switzerland reaches its fourth participation in the quarterfinals, between the World Cup and the European Championship, its first European Championship. It is important to note that they have not managed to win any of their matches when they reached these stages, losing to Czechoslovakia, Hungary and Austria.
10:27 AMa month ago

This is the first time that Switzerland and Spain have met at the European Championship, having met three times before, all in World Cups; two were victories for the Spaniards and one for Switzerland.
10:22 AMa month ago

The Red and Yellow with an advantage

Spain shows great hegemony over the Swiss, with only one defeat in the 22 matches they have played against them, accumulating 16 wins and 5 draws, the match in which the Spaniards lost was in the World Cup in South Africa.
10:17 AMa month ago

On the other hand, the Swiss are on a scoring streak. They have scored three goals in each of their last Euro matches. It is important to note that they had not accumulated more than two goals per game in the group stage. The last time they scored three goals or more in consecutive matches was in 2017.
10:12 AMa month ago

Spain is coming off the back of becoming the first team to score five or more goals in back-to-back matches. The Spaniards had failed to score more than three goals in their first 42 matches.
10:07 AMa month ago

Switzerland pulled off a surprise

With Seferovic and Graranovic up front, Switzerland came from behind in the final stretch of the match and went all the way to penalties with the French, where after 4 penalties scored by each team, Sommer ended up saving Kylian Mbappé's shot that gave them the pass to the quarterfinals. 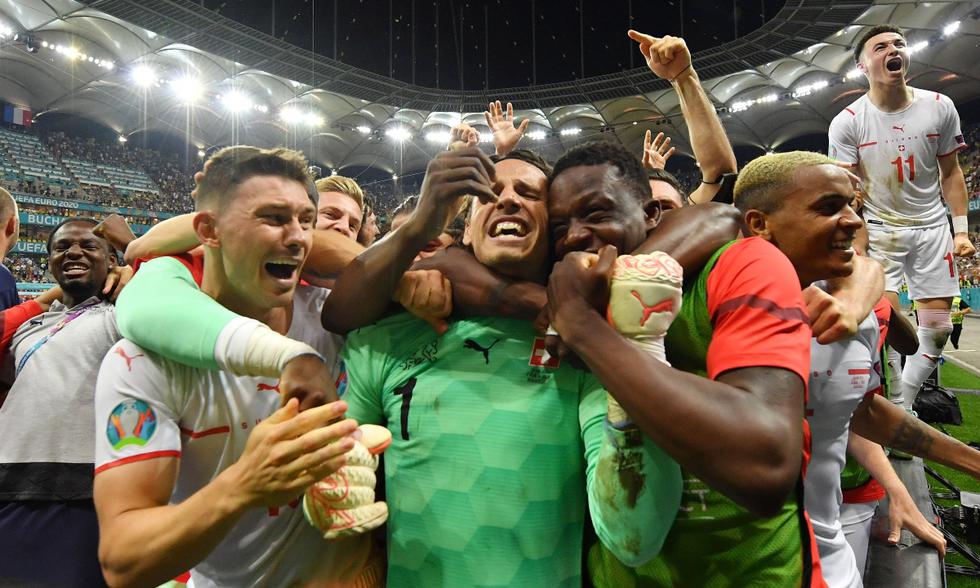 Spain seeks to continue in the tournament.

The Spaniards had a tough opponent as Croatia was in the quarterfinals, where after being down on the scoreboard, on the final stretch of the game, the Croatians tied the match and managed to extend the game to overtime, and in that extension, Spain with goals from Oyarzabal and Morata, managed to continue in the tournament and enter the quarterfinals. 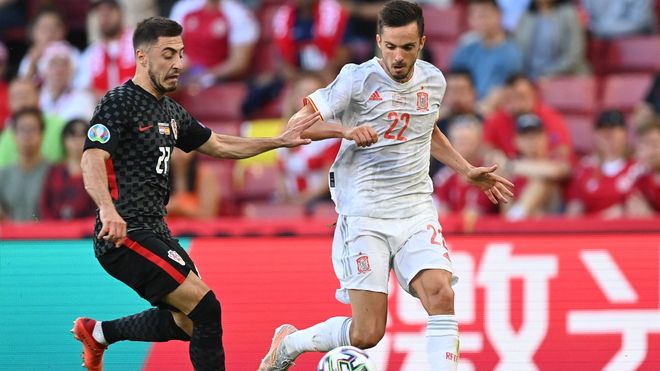 This afternoon, Spain and Switzerland will face each other at the Krestovsky Stadium, where they will try to win and qualify for the Euro 2020 semifinals.
9:52 AMa month ago

Welcome to VAVEL.com’s coverage of the 2020 Euro match: Spain vs Switzerland Live Updates!

My name is Lore Solórzano and I’ll be your host for this game. We will provide you with pre-game analysis, score updates, and news as it happens live here on VAVEL. Please stay tuned and don´t leave here

Chicago Fire 0-0 NYCFC: The points are shared at Soldier Field 2 hours ago

Seattle vs FC Dallas preview: How to watch, team news, predicted lineups and ones to watch 6 hours ago

New York Red Bulls vs FC Cincinnati preview: How to watch, team news, predicted lineups and ones to watch 11 hours ago