Continue visiting the portal so you don't miss any detail of the most relevant national and international sport.
6:31 AMa year ago

Peru has the win in its hands.

Antony Silva makes a one-handed save on Christian Cueva's shot.

There will be sudden death.

However, if Peru scores, it's game over.

Renato Tapia makes a perfect save to put Peru ahead.

If Pedro Gallese saves or the opponent misses his shot, they advance to the semifinals.

Braian Samudio also misses his penalty kick; Paraguay in danger of being eliminated.
6:53 PMa year ago

Héctor Martínez misses his shot by lifting the ball too high; Paraguay in danger.
6:43 PMa year ago

Junior Alonso does the same and gives Paraguay the lead back.
6:33 PMa year ago

Gianluca Lapadula also scores by shooting to the left of the goal. The score is tied in the penalty shootout.
6:28 PMa year ago

Angel Romero scores to put Paraguay ahead.
6:23 PMa year ago

Gabriel Ávalos scored inside the six-yard box and dramatically tied the score.
6:13 PMa year ago

Andres Carrillo goes off! The Peru attacking midfielder is sent off for a double caution.
6:03 PMa year ago

Last changes for Paraguay: Richard Sánchez and Santiago Arzamendia come out and Gabriel Ávalos and Julio Enciso join the team.
5:58 PMa year ago

Yoshimar Yotún's shot, which was deflected by Robert Piris, beat Antony Silva to put Los Incas back on top.
5:53 PMa year ago

Peru maintains possession of the ball and has tried to generate danger with shots from outside the box; however, Antony Silva has been attentive to contain any shots.
5:38 PMa year ago

Junior Alonso took advantage of a series of rebounds in the area to push the ball in and level the score.
5:18 PMa year ago

Paraguay makes its first move of the game: Robert Rojas comes on in place of Ángel Cardozo.
5:08 PMa year ago

Peru and Paraguay, looking to advance to the next round of the Copa América.
5:03 PMa year ago

Peru is defeating Paraguay 2-1; the Guaraníes had taken the lead with a goal by Gustavo Gómez, but Gianluca Lapadula appeared with a double to put the Incas up on the scoreboard.

Before the end of the first half, Paraguay was down to one man after Gustavo Gómez, its captain, was controversially sent off for a foul on Gianluca Lapadula.

Gustavo Gómez is sent off for a double yellow card, leaving Paraguay with ten players.
4:53 PMa year ago

Two minutes of stoppage time are added.
4:48 PMa year ago

Gustavo Gómez is cautioned for a hard tackle on André Carrillo.
4:43 PMa year ago

Without being better than Paraguay, Peru is winning with a brace by Gianluca Lapadula.
4:38 PMa year ago

Gianluca Lapadula scored his brace in front of Antony Silva to increase the Incas' lead.
4:33 PMa year ago

Intense match! After half an hour, Peru and Paraguay are having a very interesting match.
4:28 PMa year ago

Pedro Gallese! Peru's goalkeeper makes a one-handed save on Carlos Gonzalez's shot. He has already been a factor in keeping the match tied.
4:23 PMa year ago

Gianluca Lapadula finished off a low pass from André Carrillo inside the box to level the score.
4:18 PMa year ago

Anderson Santamaría, Peru's defender, becomes the first player to receive a caution of the match.
4:13 PMa year ago

Following a corner kick, Gustavo Gómez headed the ball home to put his team ahead on the scoreboard.
4:08 PMa year ago

In the last few minutes, both Peru and Paraguay have not been able to circulate the ball continuously, due to repeated infractions by both teams.
4:03 PMa year ago

Peru and Paraguay are looking to advance to the semifinals of the Copa América.
3:58 PMa year ago

It's about to start!

The protagonists of Peru and Paraguay are already on the field.
3:53 PMa year ago

Miguel Almirón, -for many- their best player, will not be eligible for today's game, due to an injury he suffered last game against Uruguay, and he was unable to recover; in addition, they will not be able to count on Ángel Cardozo, who has been suffering from physical discomfort in the last few days.
3:48 PMa year ago

These are the substitution options that Ricardo Gareca and Eduardo Berizzo have.

Peru, with the statistics in favor over Paraguay

In the last four occasions in which Peru and Paraguay have met in Copa América, the Incas have won three times and the Guaraníes only once.
3:38 PMa year ago

Previous meetings between Peru and Paraguay

In the last seven meetings between the two teams, there has been one draw and six wins for Peru; Paraguay's last win was in November 2014, in a friendly match.
3:23 PMa year ago

Stay tuned for the Peru vs Paraguay live stream

In a few moments we will share with you the Peru vs Paraguay live starting lineups, as well as the latest information from the Olimpico Pedro Ludovico Teixeira Stadium. Stay tuned for minute-by-minute live online coverage of the match on VAVEL.
3:18 PMa year ago

How to watch Peru - Paraguay Live Stream on TV and Online?

If you want to watch the game Peru - Paraguay live on TV, your options is: ESPN.

If you want to directly stream it: Streaming services and MLB app.

André Carrillo | The Al Hilal F. C. winger is Paraguay's most dangerous man; in addition to speed and unbalance, he can provide goals or assists after good individual technique.
3:08 PMa year ago

Jorge Almiron | Newcastle United's attacking midfielder is one of Paraguay's most lethal and intelligent weapons. His unbalance and understanding of the game is above average.
3:03 PMa year ago

The central referee of this Peru vs Paraguay will be the Uruguayan Esteban Ostojich; meanwhile, the Argentinean Andrés Cunha will be in charge of club maintenance.
2:48 PMa year ago

How did Paraguay qualify?

Paraguay finished in third place in Group A with six points, after two wins and two losses.
In their debut in this competition, they defeated Ecuador 3-1, with goals by Alejandro Romero and Ángel Romero (2); then, they lost by the minimum difference (1-0) against Argentina.

Then, they defeated Chile 2-0, with goals by Braian Samudio and Miguel Almirón. And finally, in their last match, they lost 1-0 against Uruguay. 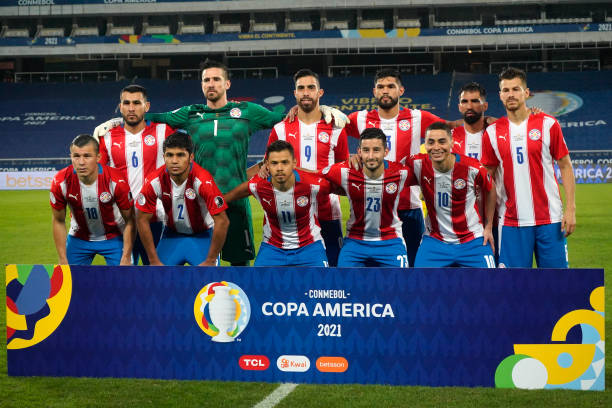 How did Peru advance?

Peru was placed second in Group B, with seven points from two wins, one draw and one loss.

In their first match of the competition, they were thrashed 4-0 by Brazil; later, they got their first points after beating Peru 2-1, with goals by Sergio Peña and Yerry Mina (AUT).

They then held Ecuador to a 2-2 draw; Gianluca Lapadula and André Carrillo were the scorers; finally, in their last match, they beat Venezuela 1-0, with André Carrillo scoring.

Format of the Copa América 2021

The competition is made up of 10 teams, and they were grouped into two sectors, each with five members.

In the group stage, each team will face its four rivals once; at the end, the first four places in each zone will advance to the next round. In other words, only two teams will not qualify from the entire competition.

Subsequently, the direct elimination rounds (quarterfinals, semifinals and final) will be played in the same way in a single match.

The second round of the Copa America 2021 begins

This afternoon, the teams of Peru and Paraguay will play the first series of the quarterfinals of the American competition. Whoever wins this match will face the winner of the series between Brazil and Chile in the semifinals.
2:18 PMa year ago

The Peru vs Paraguay match will be played at the stadium Olímpico Pedro Ludovico Teixeira, in Goias, Brazil. with a capacity of 13,500 people.
2:13 PMa year ago

Welcome to VAVEL.com's coverage of the Copa America 2021 match: Peru vs Paraguay live!

My name is Alan Rodriguez and I will be your host for this match. We will provide you with pre-match analysis, score updates and news as it happens Peru - Paraguay live here on VAVEL, in what will be a great match, as the first semifinalist of the tournament will be announced.