América beat La Academia by the narrowest of margins. Los Tapatíos tried to react in the second half but a perfect performance by Óscar Jiménez prevented them from doing so.
1:03 AM4 months ago

2 minutes compensation is added
12:53 AM4 months ago

Unreachable! Óscar Jiménez sends a Quiñones ball to the corner and keeps a clean sheet.
12:49 AM4 months ago

Quiñones misses alone in front of Jiménez, who chests down the bullets and makes two saves.
12:45 AM4 months ago

Change América. Miguel Layún and Roger Martínez come off, Nicolás Castillo and Emilio Lara come on.
12:39 AM4 months ago

Atlas change. Aldo Rocha is replaced by Pablo González
12:37 AM4 months ago

Trejo tries his luck from outside the box and hooks the ball just past Jiménez's left-hand post.
12:31 AM4 months ago

Oof! Jimenez keeps the ball after a great shot from Rocha.
12:30 AM4 months ago

Jiménez saves a close-range shot to deny Atlas an equaliser.
12:29 AM4 months ago

Yellow card for Fernando Madrigal
12:23 AM4 months ago

America continues to press and Roger is once again generating danger in the Foxes' area.
12:22 AM4 months ago

Atlas change. Furch and Barbosa come off, Javier Abella and Brayan Trejo come on.
12:18 AM4 months ago

GOOOOL.Fernando Madrigal takes advantage and scores his first goal as an americanista after a diagonal from Fidalgo.
12:16 AM4 months ago

The first half comes to an end. América and Atlas play to a goalless draw
11:58 PM4 months ago

Furch gets the ball behind Cáceres' back and tries to get into the air but fails to connect, Atlas starts to put pressure on the rival's area.
11:55 PM4 months ago

Close! La Academia penetrates down the left flank and puts Jiménez in trouble, but he makes a good save.
11:52 PM4 months ago

Gilberto Adame, a member of Club América's coaching staff, is sent off after a brawl.
11:50 PM4 months ago

Martínez and Layún weaved a dangerous move in the box but the attentive Red and Black defence did not allow it to go through.
11:42 PM4 months ago

Lainez's cross goes long and there is no one to close the trap.
11:29 PM4 months ago

Márquez was confident and tested the goal of Óscar Jiménez. Atlas knocks on the door for the first time in the match.
11:22 PM4 months ago

The ball rolls on the PayPal Park turf
11:07 PM4 months ago

The anthem is intoned!

The teams are ready for the opening protocol and the Mexican National Anthem is already being sung. The match will kick off shortly.
11:02 PM4 months ago

Club America shared images of their arrival at PayPal Park

Great reception for the Aguilas

The 'azulcremas' fans cheer the team as they warm up in the corridors of PayPal Park. The teams prepare to kick off the match in just a few minutes.

After several months of being absent due to the recovery process of a thrombosis, Nico Castillo returned to wear the Eagles plumage in the duel against Santos. Here are some of his statements

Among the dates that stand out in Las Águilas' calendar, the 11th, 12th and 16th matchdays stand out, when they will face Guadalajara, Pumas and Cruz Azul. 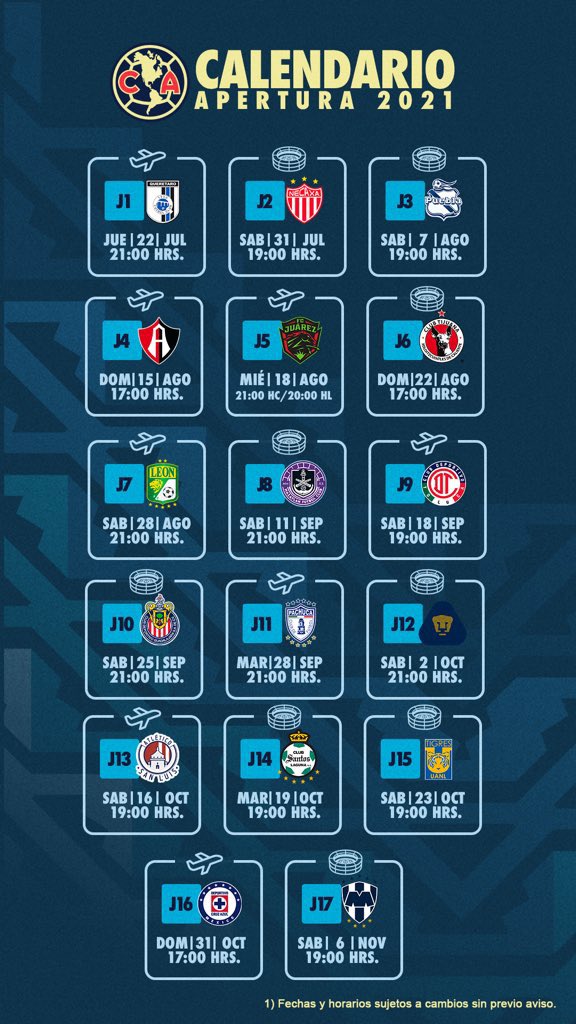 Another Liga MX tournament is about to start, for this edition both the league and the clubs that make up the league decided to release the calendar of the tournament at half time of the last match of the Mexican National Team.
10:14 PM4 months ago

Join us and find out all the details of this match between America vs Atlas. Here we will share with you the information that the teams share from their official accounts and channels.

How to watch America vs Atlas Live Stream on TV and Online?

If you want to watch the game America vs Atlas live on TV, your options is: TUDN.

What time is America vs Atlas match for Friendly Match?

The last clash between the two teams was a very political one. America won the match 2-0 but due to a line-up problem, Atlas won it 3-0 in an administrative manner.
9:54 PM4 months ago

The Zorros lost in the second leg of the Quarter-Finals of the Clausura 2021 against Puebla.
9:29 PM4 months ago

The Eagles played their first match of the tour against Santos Laguna at the Rio Tinto Stadium, where they won by the narrowest of margins with a goal from Roger Martínez.
9:24 PM4 months ago

The Rojinegros will open their preparation for the 2021 Liga MX Apertura with a match against Club America and in the next few days they will face Dorados, Tampico Maderos and Atlético de San Luis.
9:19 PM4 months ago

The Aguilas of America have scheduled their TourAguila for a mini-tour of the United States, with Liga MX teams as opponents.

Santos Laguna, Atlas and Tigres are the teams they will face in this preseason. 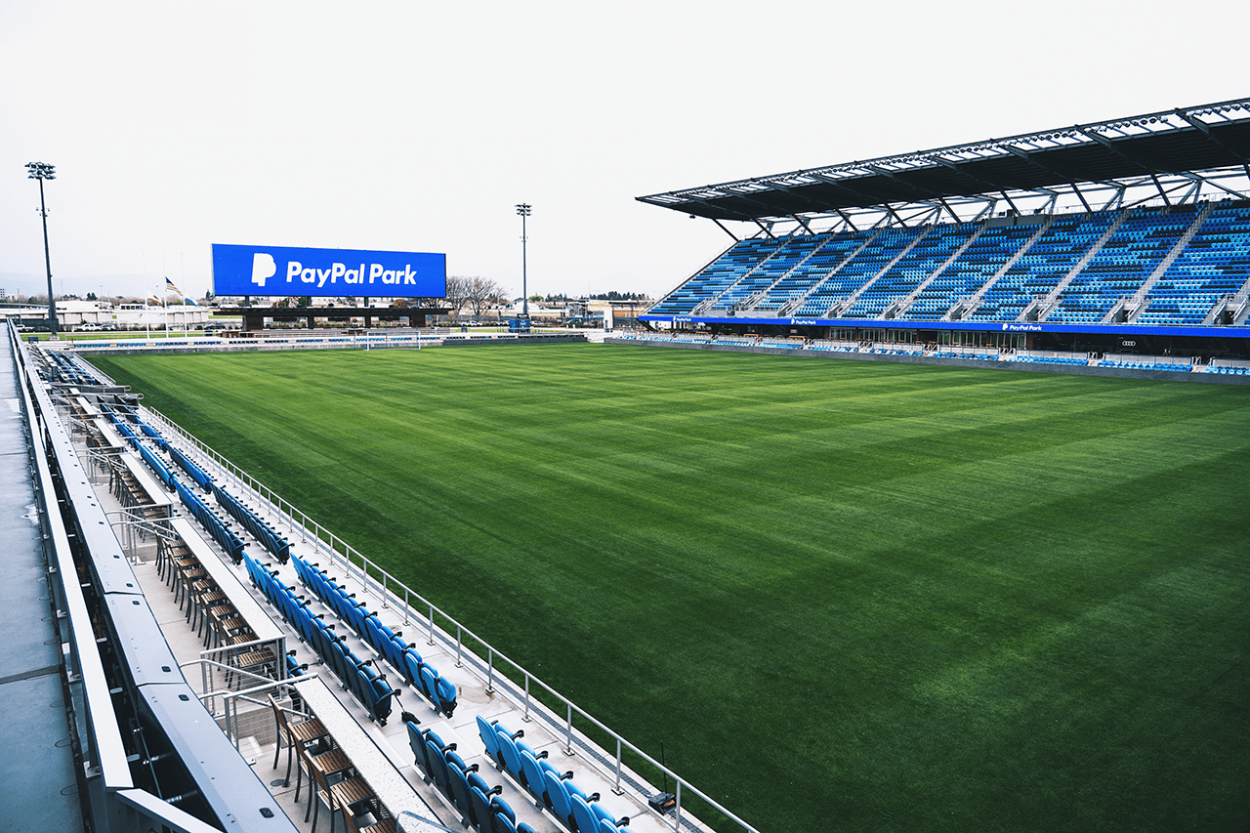 This friendly between Club America and Rojinegros del Atlas will be played in San Jose, California. The stadium is six years old, it was inaugurated in 2015. It is home to the San Jose Earthquakes of Major League Soccer and has capacity for 18,000 fans.
9:04 PM4 months ago

As has become customary, Liga MX teams conduct their preparation matches for the Apertura 2021 on tours of the United States. In addition, they take advantage of these duels so that the fans living in the United States can come and watch them live.

Welcome to VAVEL.com’s coverage of the 2021 Friendly match: America vs Atlas Live Updates!