Thank you for your attention during the broadcast of Millonarios vs Atlético Nacional for the Florida Cup 2021 playoffs.
10:45 PM2 months ago

The end of a hard fought match. Great victory for Atlético Nacional, which serves to continue gaining confidence. Millonarios was also at the height of the show despite the defeat.
10:42 PM2 months ago

Márquez crosses for Márquez in the blue team's attack, but he can't get a header on target.
10:41 PM2 months ago

Wasted counterattack by Atlético Nacional, who came out from the back with Córdoba to no avail.
10:39 PM2 months ago

Millonarios takes a corner kick from the right and Murillo heads it in.

ATLETICO NACIONAL'S GOALKEEPER'S REACTION WAS IMPECCABLE AND PREVENTED THE GOAL!

Guerra shoots from outside the box and the ball hits an opponent and deflects!

The goalkeeper of Millonarios Juan Moreno, is thrown to the field and it seems that he has a muscle injury. He is being treated by the doctors
10:30 PM2 months ago

Great individual action by Andrade, he is everyone's partner in Nacional's midfield. An important through ball for Dorlan Pabón, but Juan Moreno holds off his opponent very well.
10:26 PM2 months ago

Elvis Perlaza sends in a cross for Millonarios from the right sector and Fory cuts the ball back for Nacional
10:22 PM2 months ago

Jefferson Duque had the fourth goal for his team. Unfortunately, Nacional's player did not respond in the best way and lost an important chance.
10:20 PM2 months ago

Out: Vargas and Uribe

In: Moreno and Márquez

DORLAN PABÓN SHOOTS FROM OUTSIDE AND THE GOALKEEPER OF MILLONARIOS KEEPS THE BALL.

THEN THE BALL IS LEFT TO PERLAZA AND AGAIN THE GOALKEEPER OF MILLONARIOS SOLVES IT IN A GREAT WAY.

Yellow card for Macalister Silva. He is the second caution of the match, the first was his teammate Pereira, in Millonarios.
10:14 PM2 months ago

Millonarios manages the ball, while Nacional waits in its own territory. Millonarios' attacks are from the left and from the center.
10:10 PM2 months ago

Out: Mojica and Rengifo

In: Ruíz and Guerra

Andrés Andrade runs with the ball and Daniel Ruíz steals the ball from him in a great pass by the Millonarios player.

Millonarios looks much tidier in the second half.

Córdoba sends a beautiful aerial ball to Pabón for Atlético Nacional. Unfortunately the Nacional player was ahead and it is offside.
10:02 PM2 months ago

Pereira's right-footed shot from outside the box for Millonarios goes wide of Nacional's goal!
9:57 PM2 months ago

The central referee gives the order and the second half is underway in Orlando.
9:55 PM2 months ago

All ready for the second half!

The teams finish their break and get ready to play the second half.
9:40 PM2 months ago

END OF FIRST HALF!

What a great match Millonarios and Atlético Nacional are offering us. The team from Medellín goes to the break with the victory.

Perlaza plays in Millonarios' area and touches with Álvez, who shoots and Christian Vargas deftly retains the ball.

DORLAN PABÓN SENDS A SHOT FROM THE RIGHT CORNER, PERLAZA HEADS THE BALL AND JONATAN ÁLVEZ SCORES THE THIRD FOR NACIONAL WITH HIS RIGHT FOOT!
9:34 PM2 months ago

Nacional connects a succession of dangerous passes from the left to the right, Dorlan Pabón sends a complicated cross to Baldomero Perlaza and he cannot score the third for the green team.
9:31 PM2 months ago

The match is back and forth. Mojica shoots from outside for Millonarios, but the shot goes wide for a corner kick.
9:30 PM2 months ago

Dorlan Pabón sends a dangerous shot from the right sector and the ball just misses the goal!

Great match in the Florida Cup

ALDAIR QUINTANA MAKES A MISTAKE AT THE START OF THE GREEN AND MACALISTER SILVA MAKES A GOOD SHOT TO TIE THE GAME.
9:23 PM2 months ago

JARLAN BARRERA SERVES TO JONATAN ÁLVEZ AND SCORES THE SECOND FOR ATLÉTICO NACIONAL.

DORLAN PABÓN SENDS IN A CROSS FROM THE RIGHT AND ANDRÉS ANDRADE CONNECTS WITH A SHOT THAT HITS THE POST!

What a game we have

MACALISTER SILVA RECEIVES IN THE AREA, SHOOTS WITH HIS RIGHT FOOT AND SCORES THE GOAL.

Big mistake by Felipe Aguilar, who couldn't clear the ball in Nacional's defense.

Dorlan Pabón sends a dangerous cross to Fory, but the defender cannot connect. Nacional tries from the flanks
9:11 PM2 months ago

Andres Andrade finds space on the left side, manages to generate a good play but Llinás saves Millonarios. It will be a corner kick for Nacional
9:10 PM2 months ago

MOJICA PLAYS WITH FERNANDO URIBE AND THE SHOT ENDS UP FAR FROM QUINTANA'S GOAL.

MILLONARIOS HAD THE EQUALIZER AGAIN AND WASTED IT.

Millonarios now has possession of the ball and Atlético Nacional waits in their own half.
9:06 PM2 months ago

The opener from @Nacional's No 7!

ELVIS PERLAZA PLAYS WITH FERNANDO URIBE AND MISSES THE EQUALIZER!

Millonarios could have equalized the game

Dorlan Pabón sends a cross from the right and the ball goes wide.

Ball possession favors Nacional, and the combination of Pabón, Andrade and Barrera is important in the green midfield.
8:58 PM2 months ago

Jarlan Barrera scores the first goal of the match thanks to a filtered ball that he receives with his left foot and finishes with his right.

Good combination between Jarlan Barrera and Dorlan Pabón for Nacional, but the ball is held up by Llinás. The paisa team is more likely
8:54 PM2 months ago

Atlético Nacional tries to find connections between its midfielders, but Millonarios' good space management prevents them from doing so.
8:52 PM2 months ago

Both teams are ready to play and the ball is rolling in the Florida Cup.

The match will start soon

The teams take the field and in a few minutes the game between Millonarios vs Atlético Nacional will start.
8:38 PM2 months ago

In a few moments we will start the transmission of the match. We will publish the starting line-ups and all the details.
1:25 PM2 months ago

Do not miss a detail of the match with the live updates and commentaries of VAVEL.US Follow along with us all the details, commentaries, analysis and lineups for this Millonarios vs Atlético Nacional match.
1:20 PM2 months ago

How to watch Millonarios vs Atlético Nacional Live Stream on TV and Online?

If you want to watch the game Millonarios vs Atlético Nacional live on TV, your options is: ESPN.

The last match played between the two clubs took place on Sunday, March 21, 2021, when Atlético Nacional defeated Millonarios by a score of 2-1 in the Colombian league.
1:10 PM2 months ago 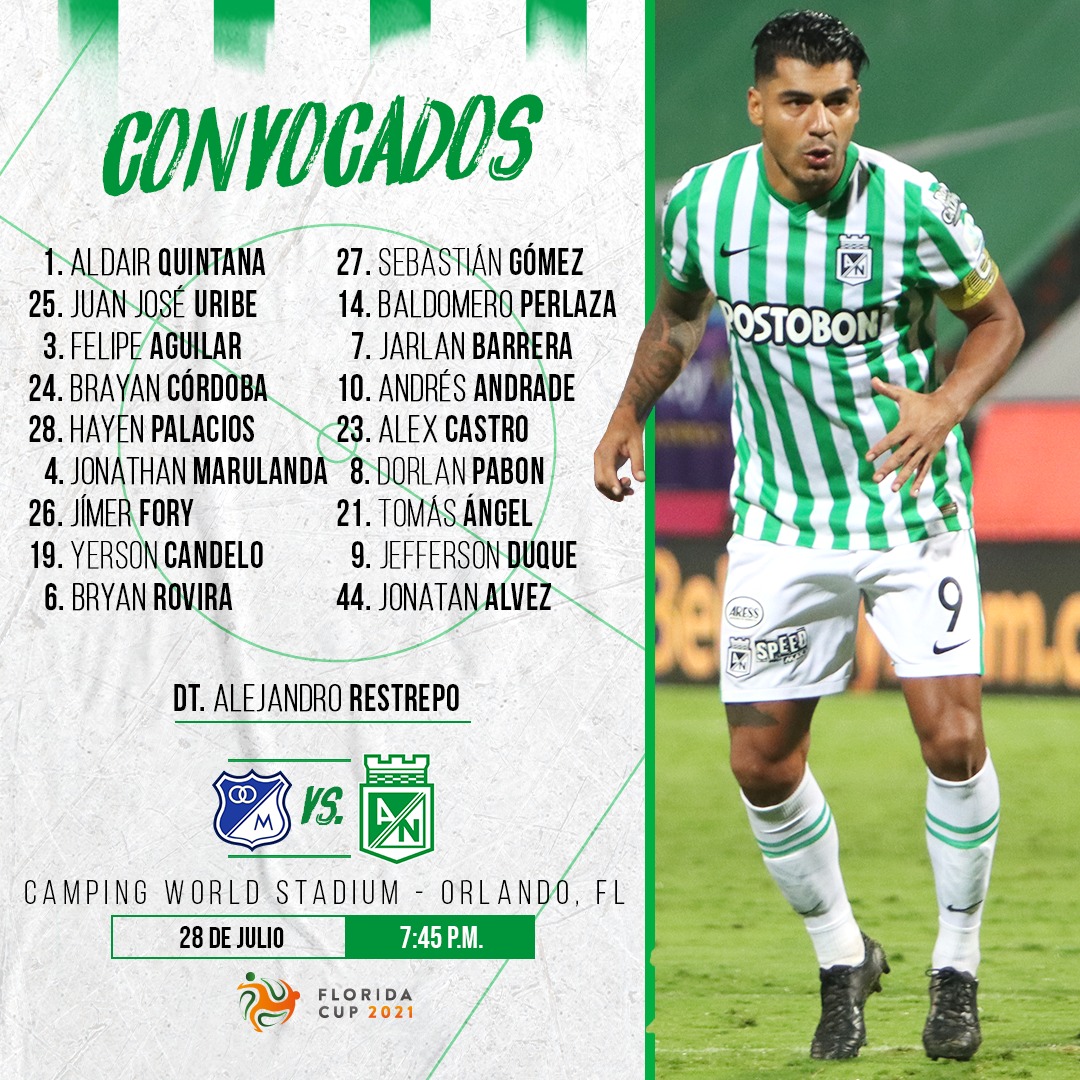 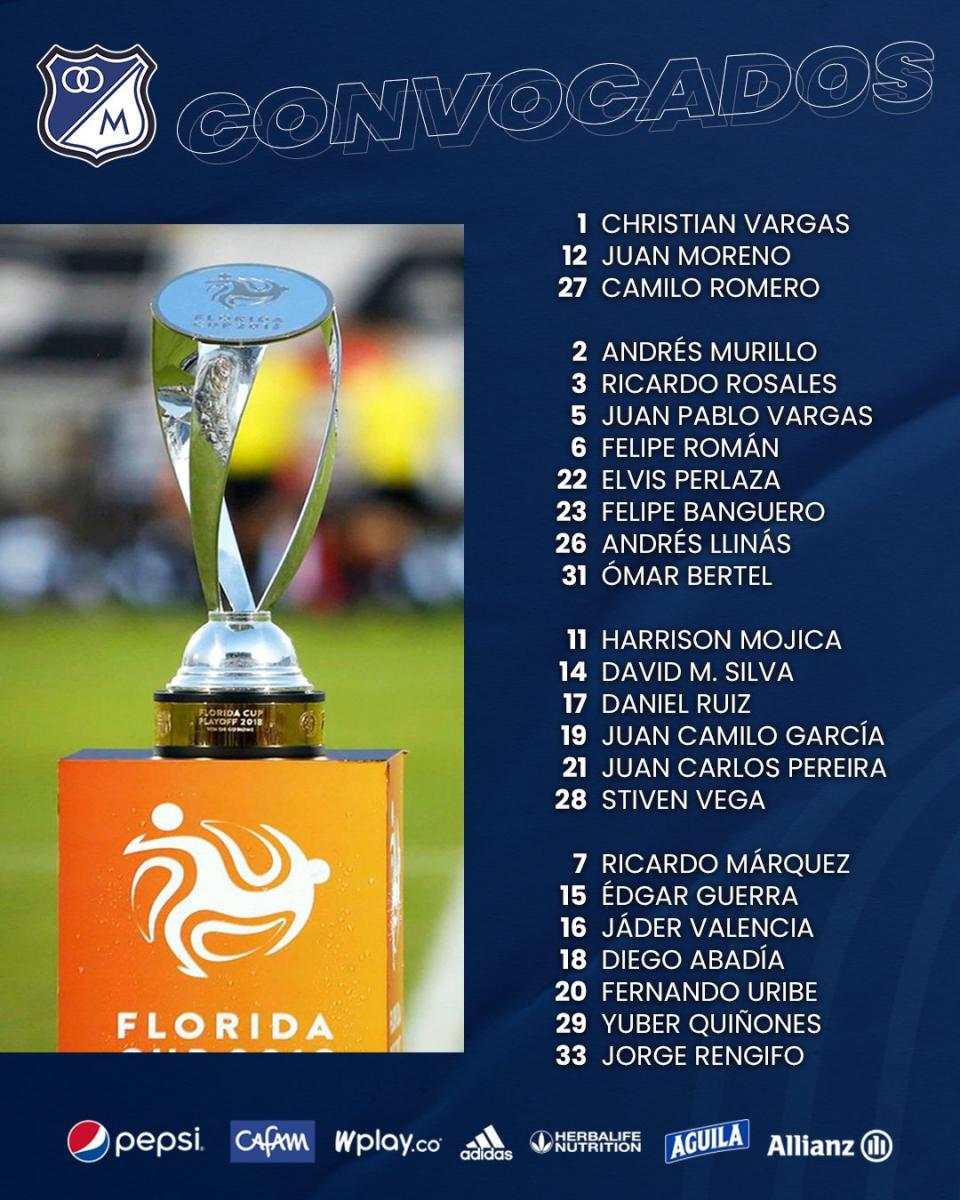 Andres Andrade is everyone's partner in attack for Atletico Nacional. Taking possession of the midfield, Nacional's player number 10 has good technical qualities when it comes to playing in partnership. In addition, at times he occupies a forward position helping to score goals on the scoreboard.
12:55 PM2 months ago

Fernando Uribe is the star of Millonarios' attack. His great scoring power proves why he is one of the most lethal strikers in Colombia.
12:50 PM2 months ago

Atlético Nacional: To ratify its momentum

Atlético Nacional has managed to achieve a draw and a victory in the Colombian league. Through this match against Millonarios in a neutral field, Nacional will seek to continue gaining confidence and consolidating its team.
12:45 PM2 months ago

Millonarios: For the win

The Colombian blue team arrives to this match after having played a decent match against Everton FC of England in the final of the Florida Cup 2021, where they were defeated by penalty kicks. Thanks to these matches, Alberto Gamero's team continues to gain experience in preparation games.
12:40 PM2 months ago

The match will be played at the Camping World Stadium

Built in 1936, Camping World Stadium has a capacity of 70,188 spectators. This stadium has hosted major sporting and entertainment events such as the America's Cup Centennial and WrestleMania 33. 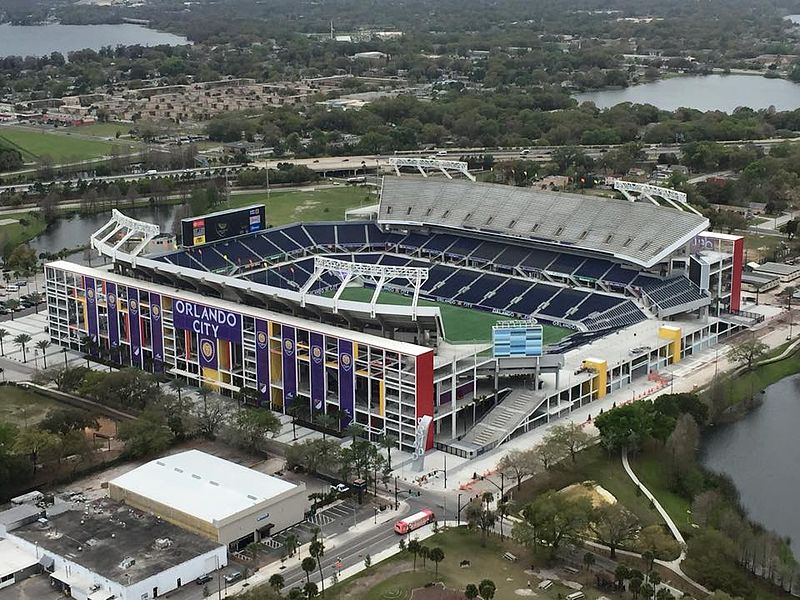 My name is Esteban Monsalve and I will be your host for this match between Millonarios vs Atlético Nacional for the Florida Cup 2021 playoffs. We will provide you with pre-match analysis, score updates and live news here on VAVE.com.