Germany will be back on the pitch on Sunday (5) at 15:45 when they host Armenia. Liechtenstein will face Romania, on the same day and time!
Standings provided by SofaScore LiveScore
4:35 PM17 days ago

With goals from Werner and Sané, Germany beats Liechtenstein and takes the three points home!
4:30 PM17 days ago

The ball was deflected into the German box, and the ball went close to Leno's right post!
4:29 PM17 days ago

Gosens, injured, leaves the field at the moment. Germany, who have no more substitutions, will be left with 10 on the field in this final.
4:25 PM17 days ago

Double substitution in Liechtenstein: Sandro Wolfinger and Malin are out for Yildiz and Kollmann.
4:23 PM17 days ago

Substitution in Germany: Kimmich out, Wirtz in.
4:19 PM17 days ago

Sané managed a beautiful cross-shot, already inside the penalty area, on the left, to increase the score!
4:16 PM17 days ago

Sané came down the left and headed the ball over the goal!
4:14 PM17 days ago

Substitution in Germany: Gundogan out, Goretzka in.
4:13 PM17 days ago

Kehrer headed Sané's corner hard and sent it dangerously over the goal!
4:12 PM17 days ago

Gosens risked a strong shot from outside the area and sent it over the goal, with a deflection. At the corner the game was stopped for the home defender's assistance.
4:03 PM17 days ago

Substitution in Liechtenstein: Sele left and Wolfinger came in. The one on the field is his brother: Sandro.
4:01 PM17 days ago

Buchel, on a low cross, deflected the ball. On the rebound Gosens hit, he saved, and on the rebound Gundogan shot and the goalkeeper saved for a corner!
3:58 PM17 days ago

Confirming: Leichtenstein is the same team that entered the first half, without substitutions. Germany dominates, but without finishing so far.
3:47 PM17 days ago

Now Werner gets the first touch on the ball and it rolls into the second half of the match!
3:47 PM17 days ago

The teams return to the pitch to start the second half. There appear to be changes in Liechtenstein, which we will confirm in a moment.
3:32 PM17 days ago

Without extra time, the first half ends with only one goal for Germany, from Werner, who leads 1-0!
3:27 PM17 days ago

Werner received in front, inside Musiala's area and hit a low shot between Buchel's legs, opening the score for Germany!
3:25 PM17 days ago

Buchel punched the ball out but couldn't get it away, and Gundogan got it on the edge of the box, but came in to finish and sent it SOON from the empty goal.
3:19 PM17 days ago

Gundogan, in another shot from outside the area, sent the ball through the right side of the goal.
3:05 PM17 days ago

On Kimmich's cross from the right, Gosens was in the box to head and send the ball in at the left post!
3:01 PM17 days ago

Now it was Gundogan's turn to strike hard, but from the right side of the goal.
2:53 PM17 days ago

In another ball in the box, Sané found Werner, who tabbed with Havertz, to finish, but Buchel sprawled far away!
2:50 PM17 days ago

Sané already created the first great chance of the match with a cross-shot, but the defense took it away!
2:46 PM17 days ago

Yanik Frick gets the first touch on the ball and it rolls into the first half for Lichtenstein and Germany!
2:44 PM17 days ago

The national anthems of Germany and Liechtenstein are now played on the pitch.
2:44 PM17 days ago

The teams appear on the field to start the match!
2:25 PM17 days ago

At the same time as this match you can also follow Czech Republic-Belarus, Andorra-San Marino, Poland-Albania and Italy-Bulgaria.
2:25 PM17 days ago

The round started yesterday, with a 2-2 draw between Kazakhstan and Ukraine. Then Portugal beat Ireland 2-1, while France drew 1-1 with Bosnia. Latvia beat Gibraltar 3-1 and Norway drew 1-1 with the Netherlands.

The players appear on the field to begin their warm-up work.
2:10 PM17 days ago

The record is cruel with Liechtenstein. There are four matches, two qualifiers and two friendlies. And in these four games only Germany won, both home and away. German dominance is irrefutable.
1:54 PM17 days ago

Line up of Liechtenstein

The novelties in the selection of Liechtenstein are the entries of Wolfinger in defense, which came out of the middle for the entry of Sele. Sele will go to the attack, moving back one of the Frick brothers to the middle.
1:54 PM17 days ago

Liechtenstein is lined up for the match and comes into the field with: Buchel, Wolfinger, Malin, Kaufmann, Hofer and Goppel; Frommelt, Hasler and Noah Frick; Sele and Yanick Frick.

Germany comes with some new additions. In defense Baku and Kehrer start. In the middle Gundogan comes in, and Werner in attack.
1:50 PM17 days ago

Germany has been selected for the match and will take the field like this: 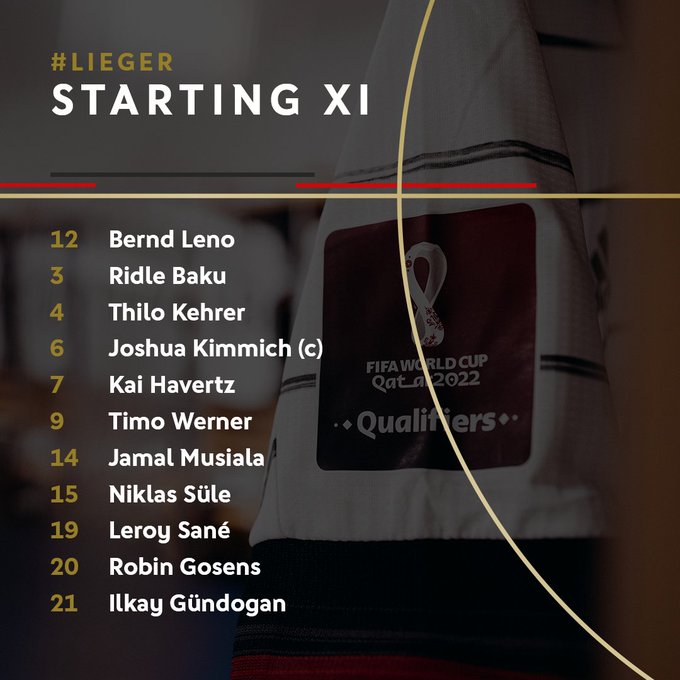 Now the broadcast of the World Cup qualifying match between Liechtenstein and Germany begins!
11:44 PM17 days ago

Do not miss a detail of the match with the live updates and commentaries of VAVEL. Follow along with us all the details, commentaries, analysis and lineups for this Liechtenstein vs Germany match.
11:39 PM17 days ago

How to watch Liechtenstein vs GermanyLive in TV and Stream

If you want to directly stream it: Streaming services and TBD app. 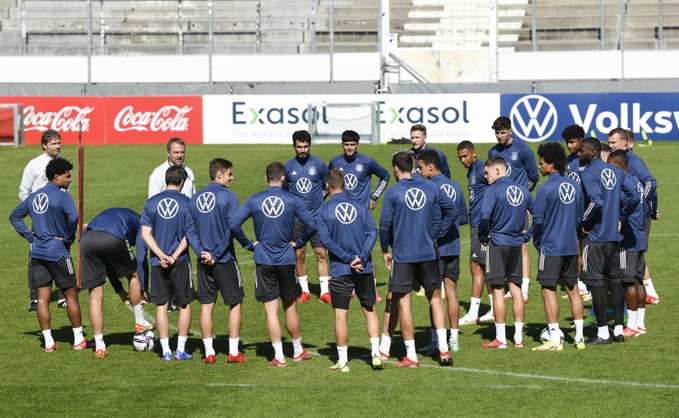 Flick commented on the training sessions in the pre-match press conference: "We focused on what we should do, how we want to perform. In the first training sessions we saw exactly what we had in mind. The team was active".
11:19 PM17 days ago

Martin Stocklasa will be at full strength for the match, unlike Hansi Flick, who will not be able to use Manuel Neuer and Thomas Muller, both injured and out of action.
11:14 PM17 days ago

Germany is in qualifying group J, where they have six points, tied with second-placed North Macedonia and three points behind leaders Armenia, making them third. With three points just below are Romania and Iceland. At the bottom is Liechtenstein, with no points.
11:09 PM17 days ago

Germany, on the other hand, is coming from a defeat to England in the round of 16 of the European Championship, 2-0, with goals from Sterling and Kane. Before that and before the Euro group stage, Germany played a friendly match against Latvia, beating them 7-1. Gosens, Gundogan, Muller, Ozols (against), Gnabry, Werner and Sané.
11:04 PM17 days ago

Liechtenstein is coming off two rather violent defeats. The first was to the Faroe Islands, 5-1. Klaemin Olsen (2), Brandur Olsen (2) and Davidsen scored for the home side, while Goppel scored the other goal. Against Switzerland it was even worse. The score was 7-0, with goals from Gravanovic (3), Fassnacht (2), Frick (against) and Edmilson Fernandes, completing the rout.
10:59 PM17 days ago

CF Montréal vs Chicago Fire preview: How to watch, kick-off time, team news, predicted lineups, and ones to watch 17 hours ago
//