We hope you enjoyed the Watford vs Wolves matchday four of the Premier League. Continue to visit the VAVEL portal to keep up to date with all the information that comes up throughout the day.
11:56 AM16 days ago

Wolverhampton managed to get three points after a bad start of the season after beating Watford by a score of 0-2.

At the beginning, it was the visiting team who had the ball possession and creativity in attack, however, they were unable to finish the game in the right way.

In the second half, a mistake in Watford's defensive saga ended up putting the visitors ahead on the scoreboard. The Wolves' first win of the current season came as a result of the great spaces left by the locals in their desperate search for an equalizer. 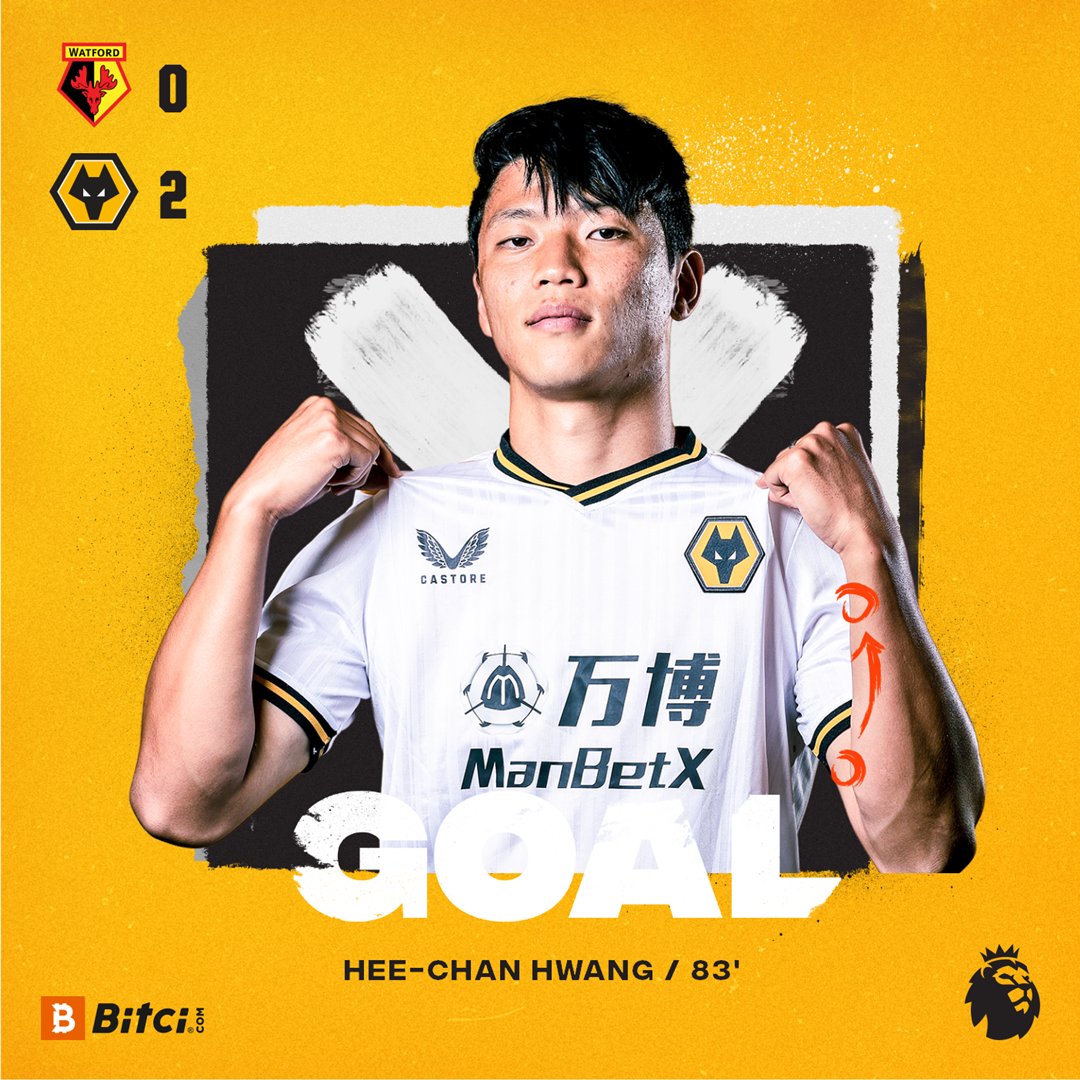 Hwang Hee-Chan (Wolverhampton Wanderers) left footed shot from inside the box makes it 0-2 to Wolves.
11:40 AM16 days ago

Danny Rosse tried to assist Sarr on a split ball from the third quarter of the field but the African player was caught offside.
11:37 AM16 days ago

Free kick for Watford! They go all out on the attack in search of an equalizer.
11:33 AM17 days ago

Own goal by Francisco Sierralta, Watford. Watford 0, Wolverhampton Wanderers 1.
11:31 AM17 days ago

Connor Coady joined the attack and headed into the six-yard box but the ball ended up in the stands.
11:28 AM17 days ago

Another yellow card! Emmanuel Dennis is cautioned for a foul on Rúben Neves.
11:26 AM17 days ago

Fernando Marcal is cautioned by the Wolves after making a strong complaint to the referee.
11:25 AM17 days ago

Danny Rose is cautioned for a foul on Nelson Semedo.
11:23 AM17 days ago

Free throw for the Wolves in the first quarter of the field.
11:12 AM17 days ago

Once again, Watford came close with a misplaced header by Sarr.
11:04 AM17 days ago

The match resumes. Both teams are still looking for a goal to break the scoreline.
10:49 AM17 days ago

The referee blows the whistle and ends the first half from Vicarage Road. So far, Wasps and Wolves have played out a goalless draw.
10:42 AM17 days ago

Dangerous free kick for Wolverhampton!
10:40 AM17 days ago

Close to opening the scoring! Emmanuel Dennis got into the six-yard box after a good pass from Danny Rose, but his shot was too wide and ended up in Jose Sa's goal kick.
10:38 AM17 days ago

Wolves insist again! Trincao's left-footed shot went over the top of the home goal. The visitors had the clearest chances in the match.
10:31 AM17 days ago

Offside! Wolves are already making a break for the home goal but Adama Traore was offside and the play is over.
10:28 AM17 days ago

Nelson Semedo tried to take a shot on the edge of the half moon but his shot was well blocked by the defense.
10:25 AM17 days ago

Joshua King's right-footed shot from the center of the box is saved by Jose Sa.
10:21 AM17 days ago

The ball fights with everything!

20 minutes have already gone in this first half and it is the Wolverhampton team who has the possession and creativity of the ball. So far they are averaging 65% possession and 88% passing accuracy. 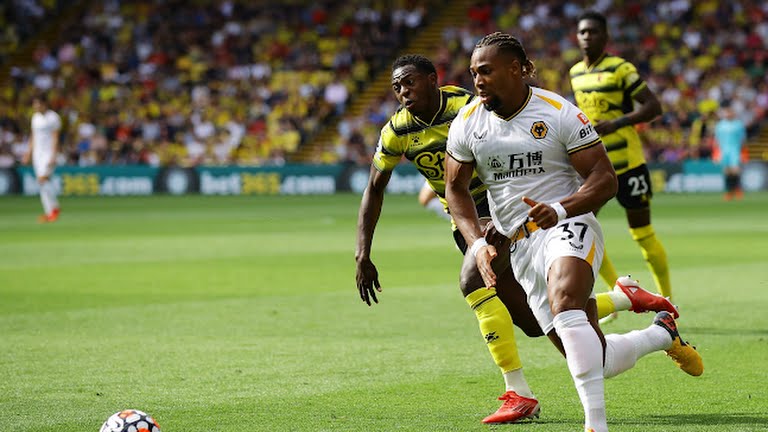 A foul by Nelson Semedo leads to a dangerous free kick for the Golden Boys.
10:15 AM17 days ago

First card of the match! The number 4, Etebo, receives the yellow card after a hard foul on Trincao.
10:11 AM17 days ago

After the first 10 minutes of play, the visiting team maintained a constant high pressure that did not allow Watford to generate a dangerous play.
10:08 AM17 days ago

An attempt from outside the area by Neves after a great play created by the Spaniard Adama Traore.
10:05 AM17 days ago

Attempt missed. Marçal left footed shot from outside the box misses to the right.
10:03 AM17 days ago

The whistle blows and the excitement begins at Vicarage Road between Watford and Wolves.
9:50 AM17 days ago

In a few minutes we will start with the match: Watford vs Wolverhampton. Duel corresponding to Matchday 4 of the Premier League season 2021-22.
9:41 AM17 days ago

This is what Vicarage Road looks like today to host the Premier League matchday 4 clash between the Golden Boys and Wolves.

The field of play has already been recognized!

The Wolverhampton team is already on the field at Vicarage Road to perform their respective warm-up exercises and warm up for the start of the match. 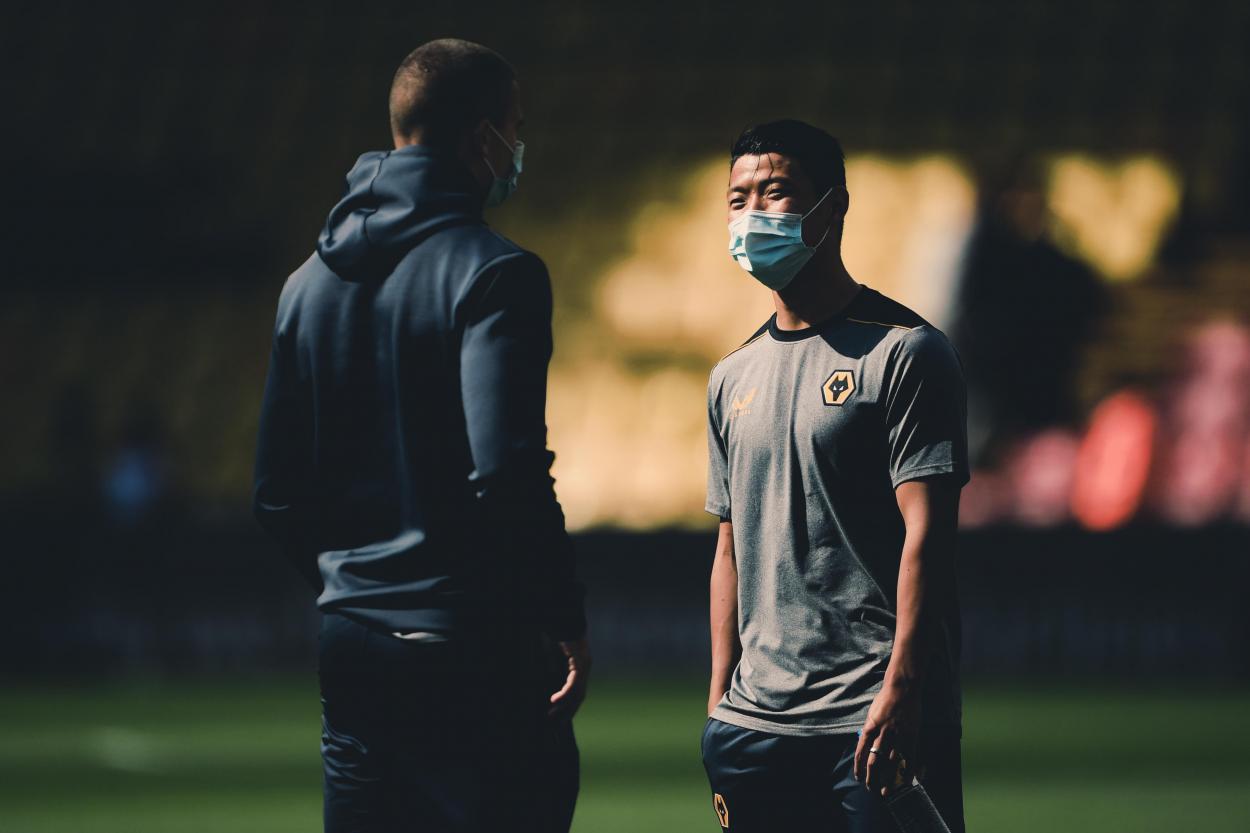 With the stoppage for the qualifiers for the Qatar 2022 World Cup, Raúl Jiménez was one of those affected by the rules imposed by the Premier League, as despite being considered by the technical director of the Mexican national team, he could not be called to wear the tricolor jersey. In view of this, the FMF filed a lawsuit against Wolverhampton, which was withdrawn yesterday and if it had not been the case, the "wolf" from Tepejí del Río would have missed today's match due to legal issues.
9:22 AM17 days ago

How has Watford fared so far this season?

The Hornets started strongly, beating Aston Villa 3-2, but then lost two consecutive matches. First Watford lost 0-2 to Brighton and then 0-1 to Tottenham. Now, they will again look to keep on winning against an opponent that is hurting from 4 consecutive defeats in a row and still can't find a way to unlock glory in the current season.
9:13 AM17 days ago

Vicarage Road, a soccer stadium located in Watford (Hertfordshire, England), which hosts the home soccer matches of Watford F.C. of the Premier League. Its current capacity can accommodate 21,577 fans. Today it is ready to host one more match of the highest soccer elite in England.

These are the eleven Wasps that will start the match at Vicarage Road, the home side held nothing back by fielding Sissoko, Sarr, King and Dennis in attack. 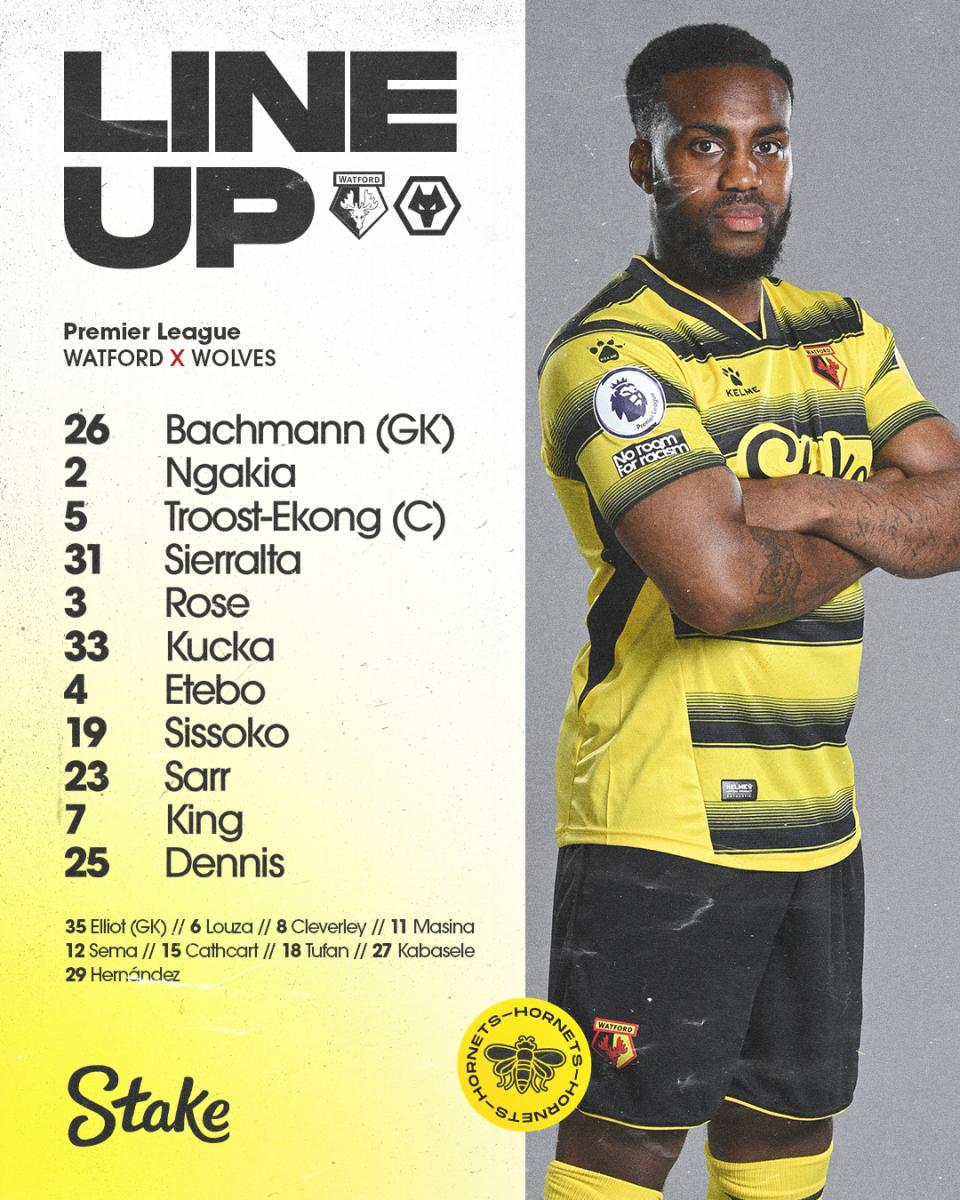 This is how Wolves will take the field!

These are the eleven wolves that will seek to howl in Watford City, England and finally get after three games played, their first victory in the Premier League. Raúl Jiménez is once again in the starting lineup and today the Mexican could score again!

Our line-up for this afternoon's @premierleague fixture against @WatfordFC. #WATWOL

The team coached by Xisco Muñoz arrives after losing against Tottenham, while Wolverhampton Wanderers arrives after losing against Manchester United in a match surrounded by controversy. A total of 3 points separate Watford and Wolverhampton Wanderers, with the Golden Boys in 12th position in the table, 6 positions behind Wolves, who are at the bottom of the table.
9:01 AM17 days ago

No need to wait any longer, today Watford vs Wolves will face each other at Vicarage Road in England in search of three points in this Premier League matchday 4.
6:39 AM18 days ago

Do not miss a detail of the match with the live updates and commentaries of VAVEL. Follow along with us all the details, commentaries, analysis and lineups for this Watford vs Wolves match.
6:34 AM18 days ago

What time is Watford vs Wolves match for Premier League?

This is the start time of the game Watford vs Wolves of 9th September in several countries:

From Mexico to the world, Raúl Jiménez is back with Wolverhampton after his head clash with David Louis that sidelined him for most of last season. Since his arrival at Wolves in 2019, the Mexican has become an idol of all and sundry by scoring 48 times and assisting 18 times and totaling 110 appearances in the starting lineup. The so-called Mexican wolf had outstanding performances in the preseason where he even scored goals and little by little he has been regaining his optimum level with which he was once seen, so in this beginning of the season he could start to shine as he did in his arrival at the club. 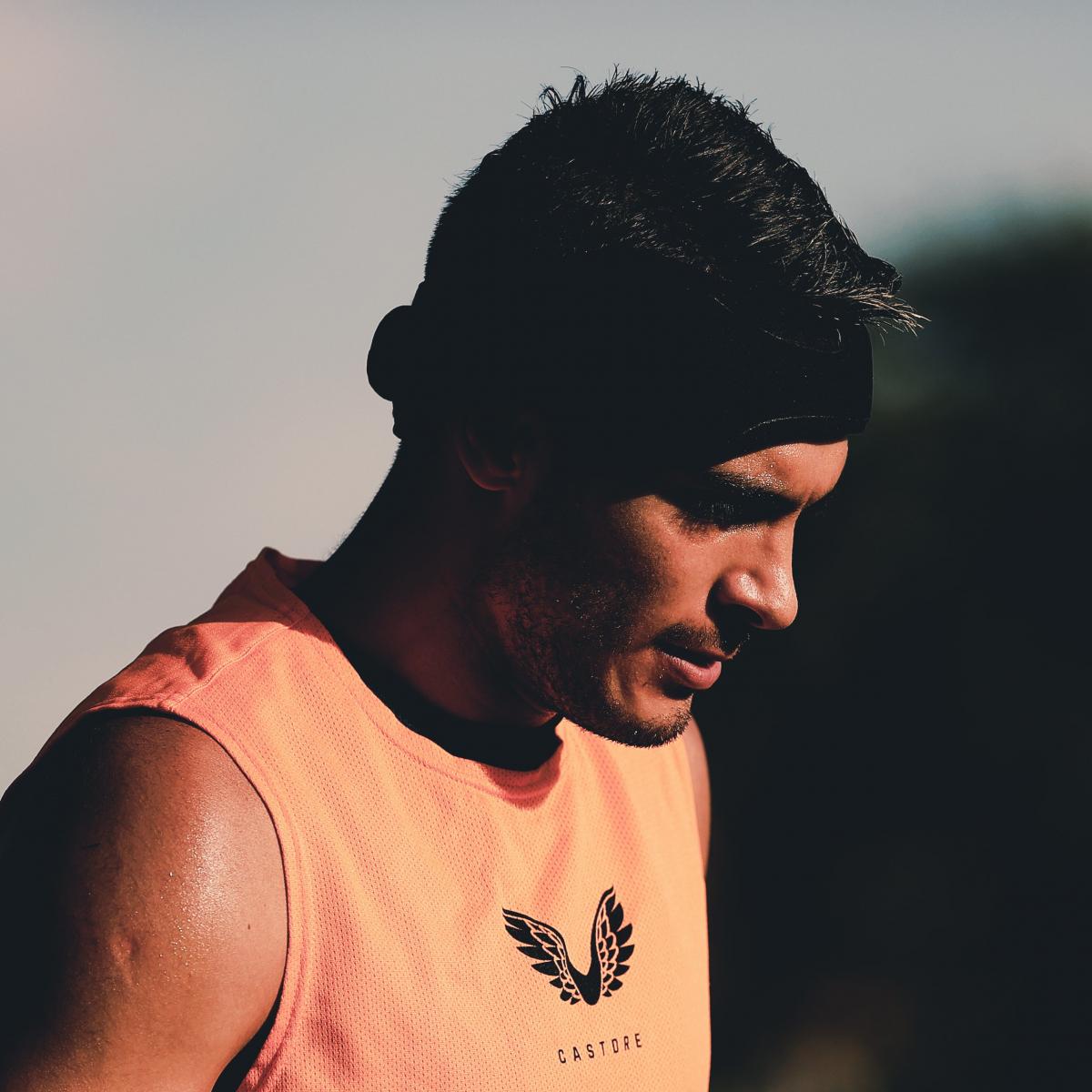 In the Wasps, the presence of the Colombian Juan Camilo Hernández stands out, who has just scored one of the winning goals on match day two and who is shown as one of the alternatives in the attack to try to be very effective in front of the rival goal, so he could be the fundamental piece when facing the Wolves. 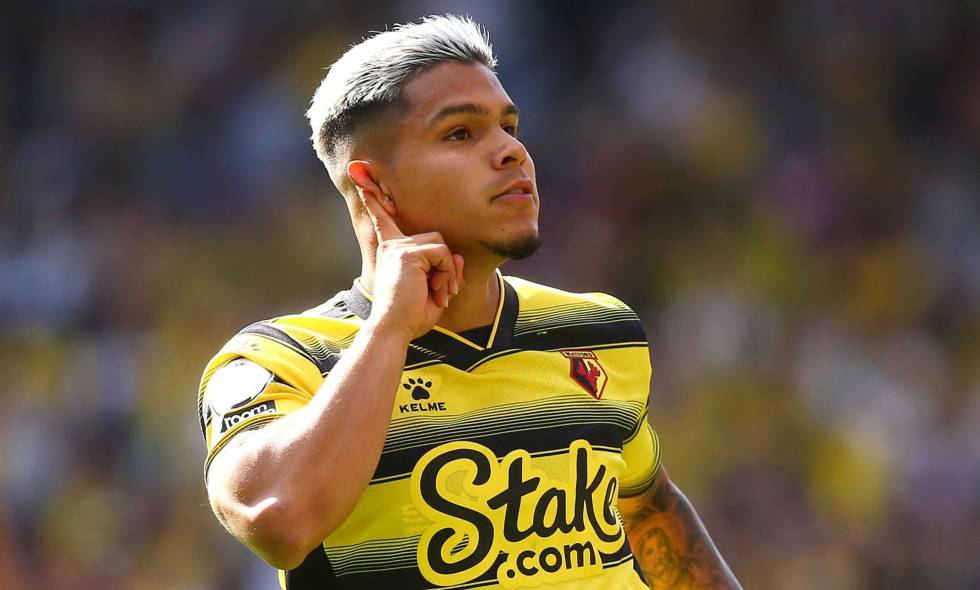 The Golden Boys and Wolves have met a total of 49 times (16 wins for Watford, 15 wins for the Wolves side and 18 draws) in the history. The last time these sides met face to face was on matchday 21 of the 2020-21 season at Molineux Stadium where the Xisco-led side beat Raul Jimenez's Wolves 2-1. 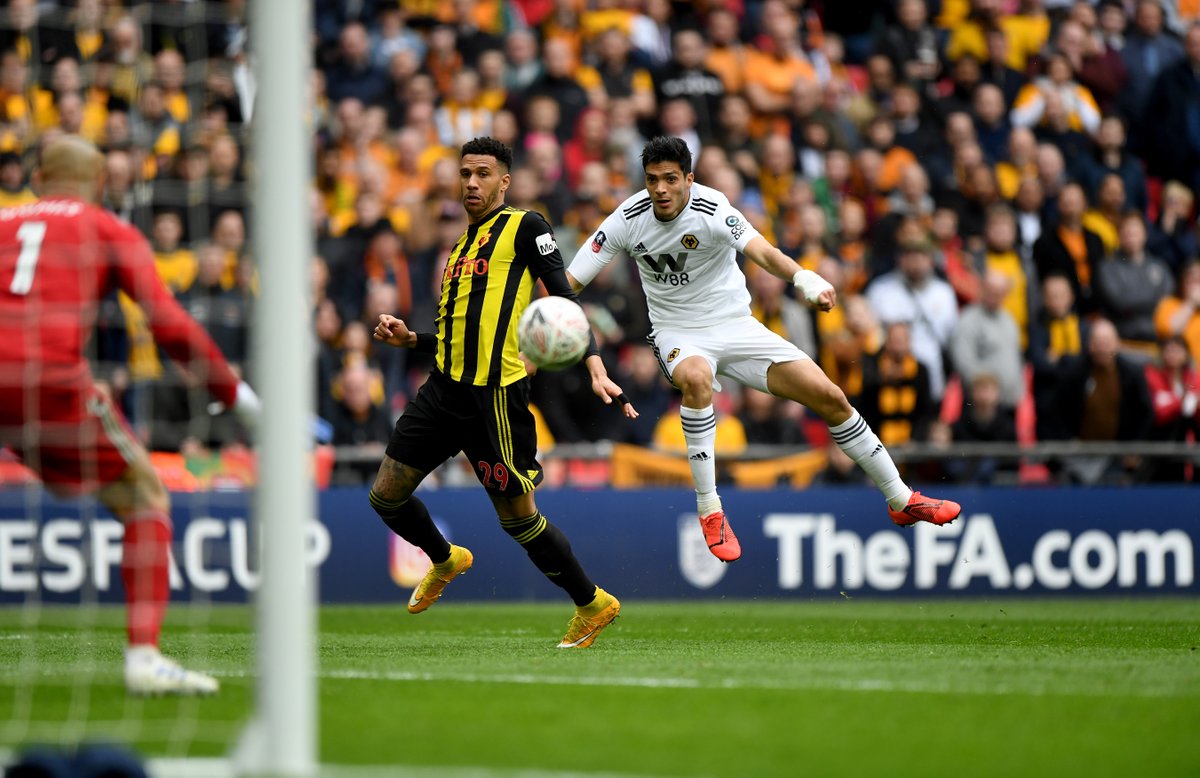 For this match, Peter Bankes will be the central referee, he will be accompanied by James Mainwaring and Wade Smith as the assistants 1 and 2 respectively, finally, David Webb will serve as the fourth referee. In the VAR, referees Simon Hooper and Simon Beck will be in charge of monitoring any dubious play inside the box or that merits a red card.
5:59 AM18 days ago

The Wolverhampton squad is experiencing one of its worst storms since its return to the Premier League, the current team of which Raúl Jiménez is a member has failed to score so far this season, so far three consecutive defeats, the last one being the most controversial because a referee decision was the one that changed the course of the match. Likewise, despite the fact that they are gradually starting to regain their level and have a full squad, the fact of not scoring could cost them dearly in the future, which is why it will be very important for the Mexican wolf and company to be victorious at home this Saturday.

The need to keep adding up

The Golden Boys have already managed to score in the current Premier League season and that has been enough to place them in the mid-table zone, however, they cannot be satisfied with that because if they do not continue to score they could drop more places and start worrying about not being relegated this season. Watford is coming from a defeat by the minimum against the powerful Tottenham, like its rival, the mood is down, however, they will play at home and that could play in their favor to get the three points and climb places in England.

Only three points separate them

Both teams have not had the best start to the season they would have liked, on the one hand, the Watford team is in 12th place in the Premier League with only three points so far in the championship, while the Wolves team is still unable to score in the championship and that keeps them in relegation positions in 18th place in the table. A victory in this atypical moment would mean a breath of pure oxygen for both teams and start to get back on track in good time, before it is too late. 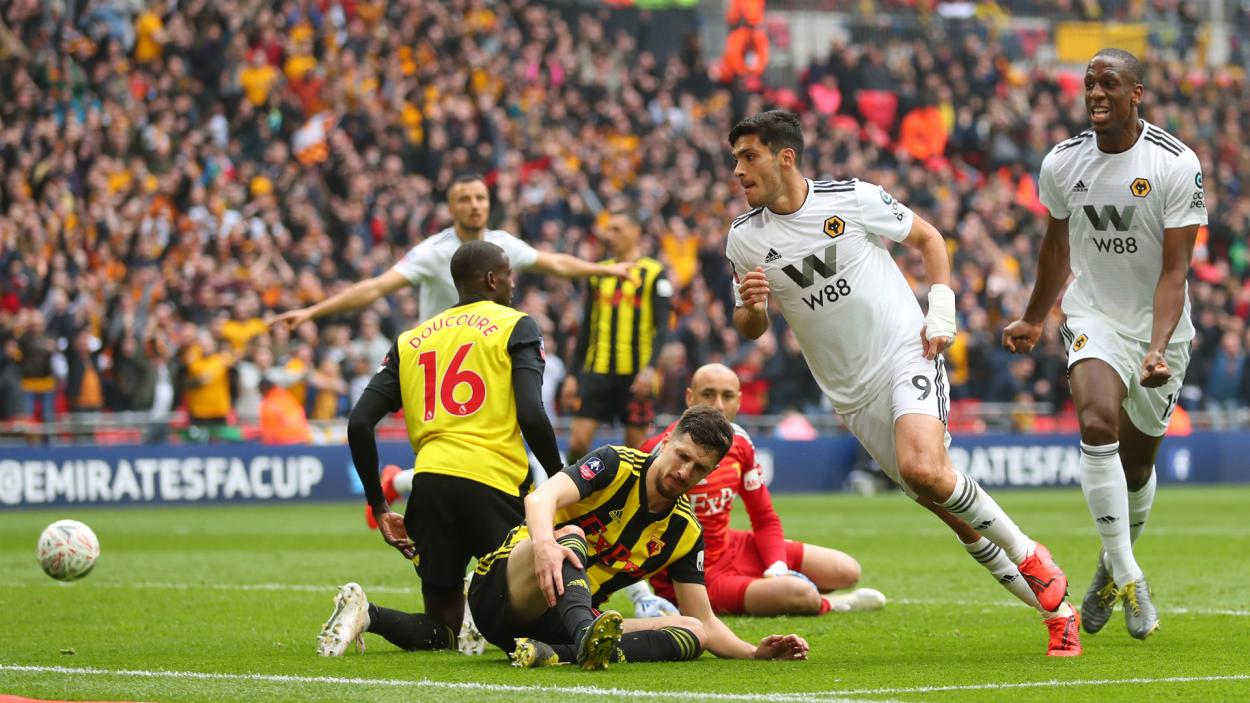 The Watford vs Wolves match will be played at The Vicarage Road Stadium, in Watford, England. The kick-off is scheduled at 10:00 am ET.
5:39 AM18 days ago

Welcome to VAVEL.com’s LIVE coverage of the 2021 Premier League: Watford vs Wolves!