Thank you here for your audience in yet another Serie A match. Stay tuned right here on VAVEL for the repercussions of this game. Have a good afternoon and see you next time!
10:55 AMa month ago

Atalanta return to the field on Tuesday (21), when they visit Genoa. Meanwhile Roma play on Wednesday (22), hosting Sampdoria.
10:54 AMa month ago

Roma beat Atalanta with an amazing victory!
10:52 AMa month ago

Double substitution in Roma: Abraham and Veretout left to enter Bove and Kumbulla.
10:49 AMa month ago

Roma substitution: Mkhitaryan out, Calafiori in.
10:44 AMa month ago

Abraham received the ball inside the box after a blocked shot and managed to finish, sending it into the right corner for the fourth goal!
10:39 AMa month ago

Double substitution at Atalanta: Hateboer and Pezzela left to enter Zappacosta and Maehle.
10:36 AMa month ago

Yellow card to Mancini, for a foul on the intermediate line.
10:34 AMa month ago

And now it was Roma's turn, but it was worth it! From a free-kick in the box, Smalling was able to get on the end of a high cross to deflect it with his right leg into the back of the net!
10:31 AMa month ago

Roma substitution: Zaniolo out, Shumorodov in.
10:30 AMa month ago

In the corner coming from the right Zapata managed to get a strong header in the small area and sent it into the right corner, with a deflection from the defense still. But there was an offside on the play and the goal was disallowed.
10:26 AMa month ago

Zaniolo risked a shot from outside the area and sent it dangerously wide of the right side of the goal.
10:11 AMa month ago

Yellow card to Ibañez, for a hard foul on the right. Malinovskyi takes the free-kick straight at goal, and Rui Patrício deflects it over the goal!
10:06 AMa month ago

Abraham takes the first touch and the second half of the match begins!
10:06 AMa month ago

The teams return to the pitch to start the second half. At Atalanta, Ilicic is out and Malinovskyi is in.
9:51 AMa month ago

WE HAVE A GAME! Muriel pulled a goal back at the end, but Roma still have the lead on the scoreboard with goals from Abraham and Zaniolo.
9:48 AMa month ago

Muriel finished strongly from outside the area and the ball deflected off a Roma defender, fooling the goalkeeper and going into the left corner, with Rui Patrício even saving it, but it died in the back of the net!
9:35 AMa month ago

Substitution in Atalanta: Djimisiti left and Muriel came in.
9:31 AMa month ago

Ilicic's cross in the box, Rafael Roloi managed to get a shot off, but Rui Patrício deflected it away!
9:29 AMa month ago

Zaniolo got a beautiful pass and received the ball in front of him, coming out in front of the goal and hitting it hard, in the right corner of the goalkeeper, with no chance of defense, to increase the score of the match!
9:22 AMa month ago

De Roon hit the ball hard from outside the area and forced Rui Patrício to save it!
9:10 AMa month ago

De Roon is yellow carded for bringing down Zaniolo on the edge of the box. Veretout took the free-kick and sent it over the goal.
9:04 AMa month ago

Abraham invaded the area and, in a scramble with the defense, he managed to get a shot off, blocked, and, with luck, the ball flew over Musso, making Roma's first!
9:01 AMa month ago

Zapata makes the first touch on the ball and it rolls into the first half of the match!
8:58 AMa month ago

The players appear on the field for the ball to roll!
8:47 AMa month ago

The players leave the field to finish their preparation for the match and then return to the field for the ball to roll!
8:38 AMa month ago

And continuing with the round, we have five matches tomorrow: Fiorentina hosts Sassuolo, Spezia faces Empoli, Torino plays Verona, Sampdoria faces Venezia and Milan plays the match of the round with Napoli.
8:34 AMa month ago

The round continues today with two more matches, where Bologna hosts Juventus and Cagliari plays against Udinese.
8:34 AMa month ago

Round 18 started yesterday already with two matches. In the first one Lazio beat Genoa 3-1 and in the second one Inter beat Salernitana 5-0.

The players appear on the field to begin their warm-up work.
8:15 AMa month ago

Roma is scheduled and comes to the field with: 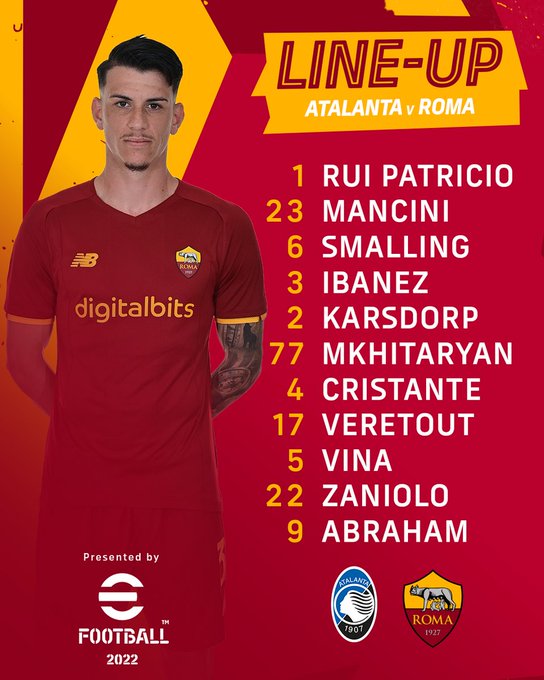 Atalanta is scheduled and comes to the field with:

Now the broadcast of the Serie A match between Atalanta and Roma begins!
8:00 AMa month ago

Do not miss a detail of the match with the live updates and commentaries of VAVEL. Follow along with us all the details, commentaries, analysis and lineups for this Atalanta vs Roma match.
7:55 AMa month ago

How to watch Atalanta vs Roma Live in TV and Stream

If you want to watch the game Atalanta vs Roma live on TV, your options is: CBS Sports Network .

What time is Atalanta vs Roma match for Série A?

This is the start time of the game Atalanta vs Roma of 18th December 2021 in several countries:

Massimiliano Irrati will referee the match, with Stefano Alassio and Andrea Zingarelli as assistants. Luigi Nasca will be in charge of VAR.
7:40 AMa month ago

The probable line-up for the match is: Rui Patrício, Mancini, Smallin and Ibañez; Karsdorp, Veretout, Cristante and Viña; Mkhitaryan, Zaniolo and Abraham. 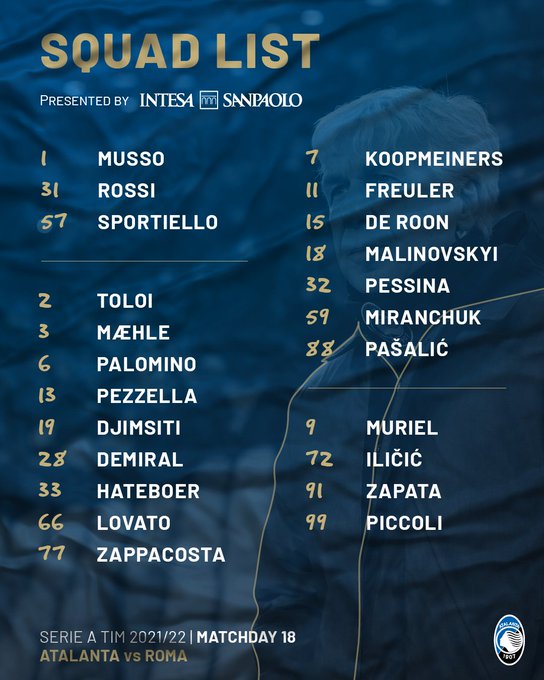 Atalanta will still be without the injured Gosens, but will have the return of Malinovskyi, who was suspended. Roma will not be able to use Gyan, who is suspended. Pellegrini is still out, while Smalling, Carles Perez, and El Shaarawy are doubts for the match.
7:25 AMa month ago

Atalanta and Roma are battling it out at the top of the Serie A table. The leader is Inter, with 43 points, while Milan is right behind with 39. Atalanta has 37 points, Napoli 36, Fiorentina 30 and Roma 28, tied with Juventus and Lazio and two points ahead of Empoli.
Embed from GioScore
7:20 AMa month ago

Roma have won two of their last two games. Away from home, in the Conference League, on the same day nine, the victory was over CSKA Sofia, 3-2. Abraham scored twice and Borja Mayoral once, while Catakovic and Wildschut scored. In Serie A, Roma received Spezia last Monday (13) and won 2-0, with goals from Smalling and Ibañez.
7:15 AMa month ago

Atalanta arrive for the match after an away win in Serie A and a home defeat in the Champions League. The defeat was on Thursday, the ninth, by 3-2 to Villarreal, when Groenveld (2) and Capoue scored for the visitors, and Malinovskyi and Zapata for the hosts. The victory was last Sunday (12), away against Verona, in a come-from-behind victory. Simeone opened the scoring, Miranchuk equalized and Koopmeiners turned the match.
7:10 AMa month ago

Welcome to VAVEL.com’s coverage of the 2021-22 Série A match: Atalanta vs Roma Live Score!