We hope you enjoyed the Getafe vs Levante matchday 23 of LaLiga. Continue to visit the VAVEL portal to keep up to date with all the information that comes up throughout the day.
5:57 PM4 months ago

The match ended at the Coliseum Alfonso Pérez, Getafe defeated Levante in the start of Matchday 23 in Madrid, Spain. 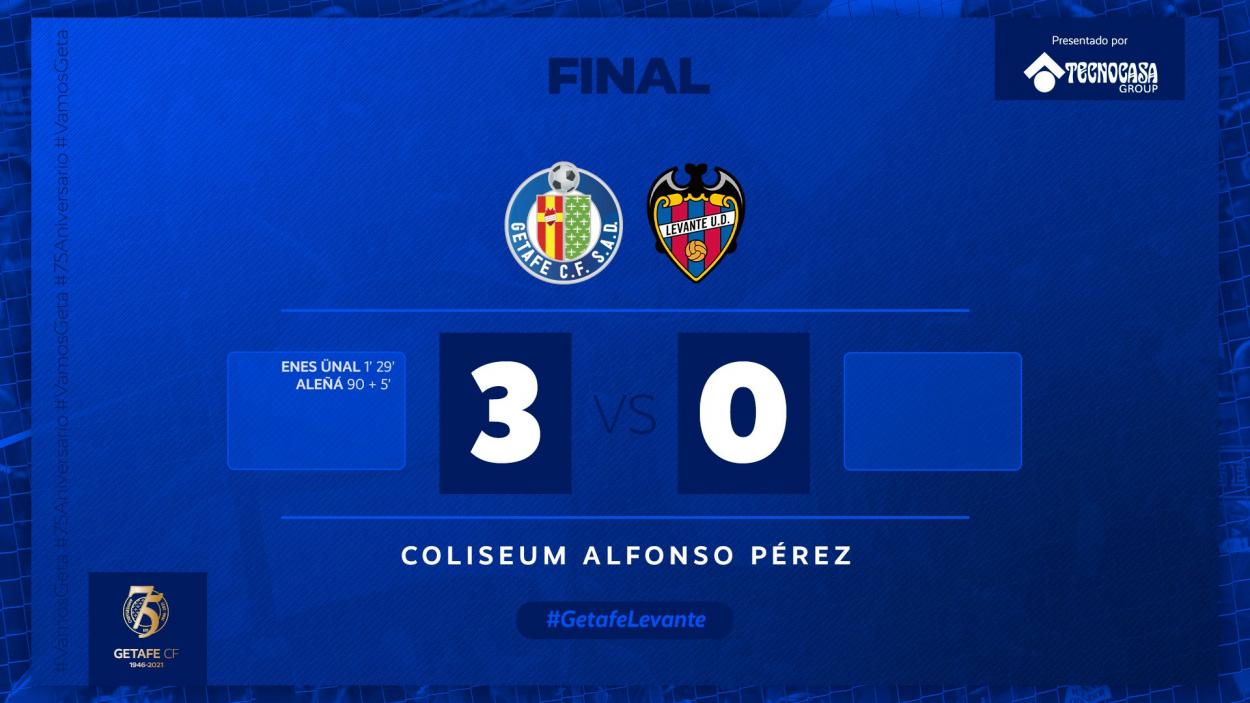 GOOOOOOOOOL FOR GETAFE! GOOOOOOOOL FOR THE AZULONES TO SET THE MATCH AND GET THE VICTORY.
5:39 PM4 months ago

LAST 10 MINUTES OF THE MATCH!  Getafe remain two goals up on the scoreboard and are within striking distance of sealing their victory.
5:33 PM4 months ago

THEY KNOCKED ON THE DOOR AGAIN! Enes Unal sent a cross shot that is saved by Aitor and avoids the third of the day.
5:08 PM4 months ago

Pepelú's dangerous shot grazes the left post but the ball refuses to go in.
4:46 PM4 months ago

The first half ends at the Colisuem Alfonso Pérez, Getafe is winning 2-0 at the moment sobr eek Levante.
4:30 PM4 months ago

GOOOOOOOOOL FOR GETAFE! GOOOOOOOOOL FOR ENES UNAL WHO SHOOTS IN A CROSS AND CROSS TO THE LEFT POST! THEY ALREADY WIN BY TWO GOALS!
4:26 PM4 months ago

Dangerous shot by Sandro that goes over the crossbar! Getafe being more superior than Levante.
4:15 PM4 months ago

DANGEROUS SHOT OF BRUTES! Soria lies down and prevents the ball from entering the blue and blues' goal.
4:05 PM4 months ago

GOOOOOOOOOOOOOL FOR GETAFE! ENES UNAL SCORES THE FIRST FROM A CORNER KICK!
4:02 PM4 months ago

The duel between Getafe vs Levante begins, both clubs will be looking for the three points today.
3:44 PM4 months ago

READY FOR THE ALIENATION OF THE LEVANTE

This is how the Granotes will start today to face the azulones. 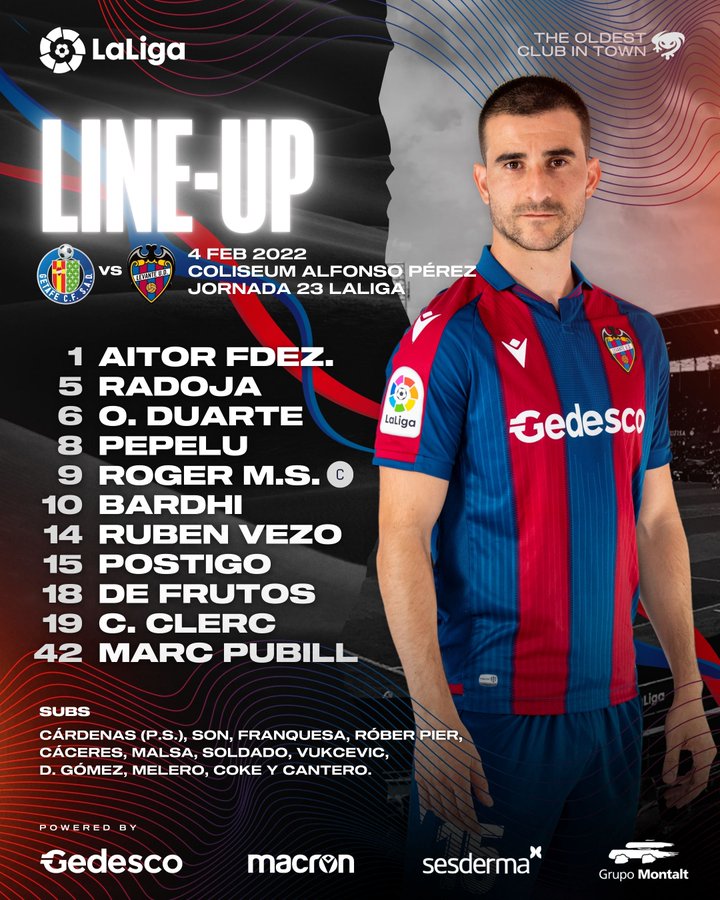 This is how the blue and blues will start today's match against Levante. 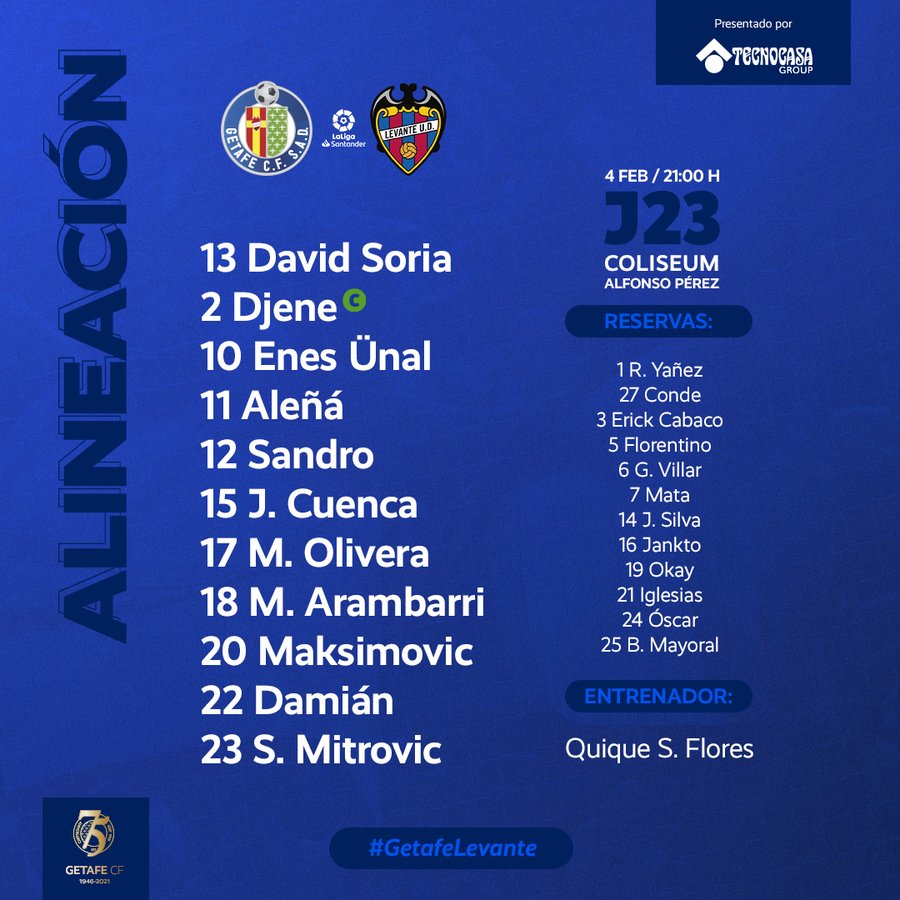 Levante could not get the first victory of the season for quite some time. They had to wait until January to get the three points for the first time. Thus, on matchday 20, the Valencians defeated Mallorca 2-0. But they were unable to build on their success. Thus, on the last matchday, Levante lost with the same score against Cadiz, seven points behind them in the standings.
3:25 PM4 months ago

Getafe has scored a great play of late. Won in five home matches out of six. It could not beat only Athletic by 0-0. And in the last match, the team beat Granada 4-2. It had a good performance in the Last matchday, drawing 0-0 with Real Sociedad in San Sebastian. Finally, Getafe left the relegation zone and moved to 16th place in the standings.
3:12 PM4 months ago

AWAY GAMES AND RECENT RESULTS

In the stretch of 35 away matches, Getafe has the slightest advantage, with 11 wins with 14 draws and 10 defeats. At the same time, in the first round of the current draw, the winner could not determine - 0:0.
3:02 PM4 months ago

The wait is over, the LaLiga actions continue with the duel between Getafe and Levante, an important duel for both that could define their future in the Spanish first division. Both clubs are coming from winning points last matchday, so they will be looking to continue that way and keep climbing positions in the general standings.
1:55 PM4 months ago

Do not miss a detail of the match with the live updates and commentaries of VAVEL. Follow along with us all the details, commentaries, analysis and lineups for this Getafe vs Levante match.
1:50 PM4 months ago

What time is Getafe vs Levante match for LaLiga?

This is the start time of the game Getafe vs Levante of 4th February in several countries: 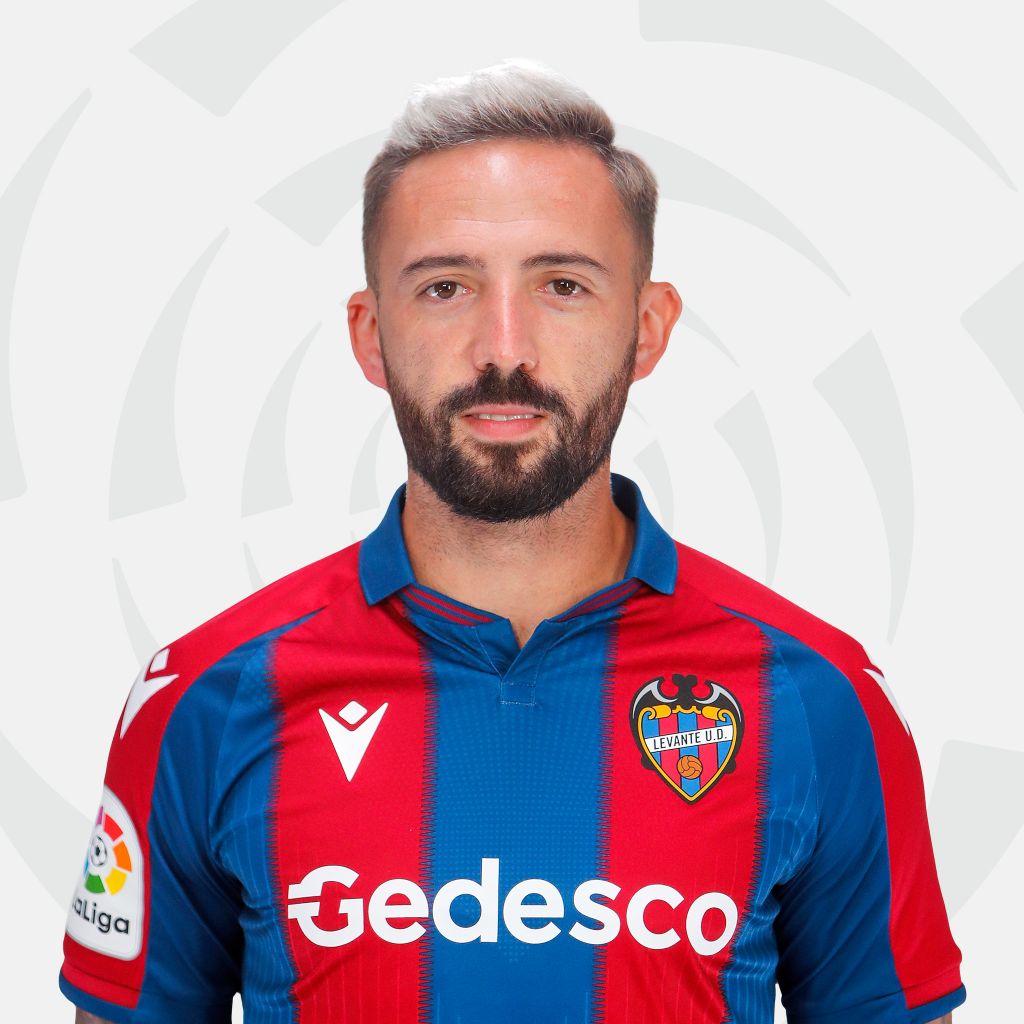 Watch out for this Getafe player:

Nemanja Maksimovic has been having a great personal performance throughout the season with the Azulon side, the Serbian native has played 1,906 minutes currently which is divided into 22 games played, 1 goal, 2 assists and 3 yellow cards. Despite not being an offensive player, the security he offers in the midfield and creativity to distribute the ball, has gradually made Getafe move further away from the relegation zone and can stay in the first division, so he will be the player to follow for this duel. 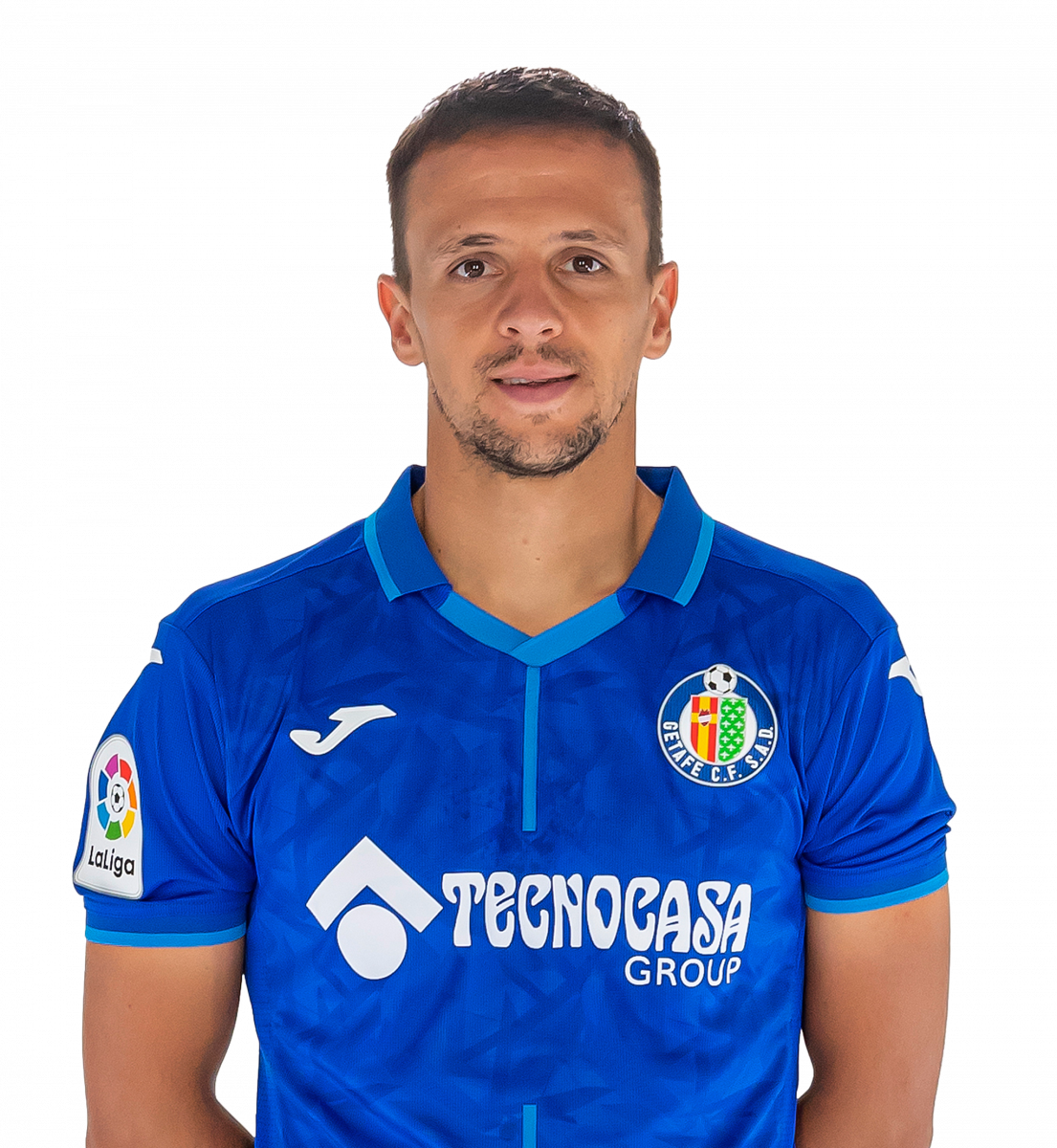 Getafe and Levante have met a total of 47 times (13 wins for Getafe, 18 draws and 16 wins for Levante) where the scales are tipped by a slight difference in favor of the Granote side. In terms of goals, the two teams are very even on the scoreboard, with 46 goals scored by the Azulonas and 47 by the Granotas. Their last meeting dates back to matchday 9 of the 2021-22 season, when both teams played to a goalless draw.
1:20 PM4 months ago

The Coliseum Alfonso Pérez, is located in Getafe (Community of Madrid, Spain), in the neighborhood of Getafe Norte. The stadium was named in honor of former soccer player Alfonso Perez. Paradoxically, he never played for Getafe, he never even played against this team, nor has he ever played in this stadium; but he is a native of the city of Getafe, being probably the most famous soccer player that this town has ever produced. When the stadium was built, in 1998, the player was at the peak of his career.
1:15 PM4 months ago

After 22 games played, Levante is in serious trouble and with a high percentage of probability of saying goodbye to LaLiga, as they are at the bottom of the general table with 11 points, which places them in the 20th position and in the relegation zone, so if they do not tighten their engines and start to get on track, the Granotes would be playing their last games in the maximum circuit. At the moment they have won 1 game, tied 8 and lost 12 games, they also have 21 goals for and 43 goals against, being one of the worst defenses in the whole competition.
1:10 PM4 months ago

The mission is to continue adding

The blue and blues will be looking to continue adding in the remainder of the season to avoid entering relegation positions and thus not having to live a drama for permanence at the end of the season. Getafe is currently in 16th place in the general table with 22 points, has won 5 matches, drawn 7 times and has tasted defeat on 10 occasions. They have also scored 17 goals for and 23 against, a situation that leaves them with a negative goal difference of -6.
1:05 PM4 months ago

Duel at the bottom

The second half of the season is already underway and the clubs are getting ready to close the rest of the sporting year. On this occasion, Getafe and Levante will face each other in a duel that means more than just three points, as both clubs are in the lower part of the general table and from now on, any duel will be vital to continue thinking about staying in the first division of Spanish soccer. On the one hand, the blue and blues have the cushion of being in the permanence zone with 4 points of difference from the first place that accredits the relegation, and Levante, currently is sunk in the last general position and 9 points away from salvation, so if the situation does not improve soon, they would be leaving the maximum Spanish circuit.
1:00 PM4 months ago

The Getafe vs Levante match will be played at the Coliseum Alfonso Pérez, in Getafe, Spain. The kick-off is scheduled at 15:00 pm ET.
12:55 PM4 months ago

Welcome to VAVEL.com’s LIVE coverage of the 2022 LaLiga: Getafe vs Levante!