Thank you for listening to this Europa League match. Have a good afternoon and see you next time!

With goals from Forsberg, Orban and André Silva, Leipzig passed Real Sociedad and will go to the quarterfinals of the Europa League!
3:35 PM3 months ago

Leipzig is replaced by Kampl and Adams. And at Real Sociedad Isak out and Djouahra in.
3:33 PM3 months ago

Forsberg hit it firmly and hard into the right corner, with Ryan hitting the corner, but no chance of a save!
3:31 PM3 months ago

Nkunku tried the move in the box, dribbled and the ball caught the defender's arm, taking the penalty!
3:29 PM3 months ago

Kampl went to isolate the ball and got stuck. Isak got the rebound, was stopped in his shot and the ball went up, but Sorloth headed it away!
3:28 PM3 months ago

Yellow for Kampl, for a foul on Januzaj in the midfield.
3:27 PM3 months ago

Substitution in Real Sociedad: Rafinha out, Sorloth in.
3:25 PM3 months ago

Muñoz received from Oyarzabal in the back line and crossed to Isak, who headed the ball to the left side of the goal!
3:23 PM3 months ago

Leipzig substitution: Dani Olmo is out and Poulsen is in.
3:16 PM3 months ago

Januzaj hit hard, straight at the goal and forced Gulacsi to save for a corner, already beaten and taken away!
3:15 PM3 months ago

Isak was spinning into Orban and was knocked down, earning another dangerous foul!
3:13 PM3 months ago

Zubimendi, in a free-kick that was taken from the area, returned his head to the area, where he arranged and hit hard to reduce the score!
3:13 PM3 months ago

André Silva was yellow carded for a foul in the midfield. Before the strike left Laimer, André Silva and Henrichs for the entry of Haidara, Angeliño and Forsberg.

Real Sociedad substitutions: Portu and Le Normand are out, replaced by Januzaj and David Silva.

André Silva received on the right, inside the penalty area and filled his foot, with strength, on high, to beat Ryan and increase the score!
3:01 PM3 months ago

Rafinha managed the first shot on goal of the match for Real Sociedad, but sent it weakly into the hands of Gulacsi.
2:58 PM3 months ago

Dani Olmo hit a hard shot from outside the box, and Ryan saved it in the right corner for a corner, already beaten and taken away by the defense.
2:49 PM3 months ago

Isak makes the first touch on the ball and it rolls into the second half of the match!
2:49 PM3 months ago

The teams reappear on the pitch for the start of the second half of the match.

With a goal from Orban, Leipzig beat Real Sociedad and secured their place in the next round of the Europa League!
2:25 PM3 months ago

Orban, on a rebound from Ryan, who had saved André Silva's penalty kick in the right corner, hit it hard and sent it into the back of the net!
2:22 PM3 months ago

Nkunku received on the right inside the area and took out the goalkeeper, but was hit on the feet, winning the maximum penalty!
2:03 PM3 months ago

Ryan came out on the left of the penalty area with the ball high up and caught it just outside the area with his hands, thus making the foul for Leipzig! The free-kick was lifted into the box by Olmo and Orban managed to get a strong shot away, but over Ryan!
1:56 PM3 months ago

Ryan went wrong, gave the ball to Kampl, who came out face to face and hit it hard, but the goalkeeper saved once again!
1:48 PM3 months ago

Klostermann received on the right, inside the area, and hit a strong cross, but Ryan saved Sociedad!
1:48 PM3 months ago

In a corner from the left Le Normand managed to get a header and sent the ball over the goal.
1:46 PM3 months ago

André Silva makes the first touch on the ball and it rolls into the first half of the match!
1:42 PM3 months ago

The teams take the field to begin the protocol for the start of the match!
1:35 PM3 months ago

The second round begins and ends today. At the same time of this match we have Olympiacos and Atalanta, where Atalanta won the first leg 2-1. We will also have Lazio and Porto, where Porto won 2-1 in the first leg. Closing the schedule Dynamo face Sevilla, where Sevilla won the first leg 3-1.

The players appear on the Anoeta lawn to begin their warm-up work.
1:01 PM3 months ago

RB Leipzig is lined-up and will field: 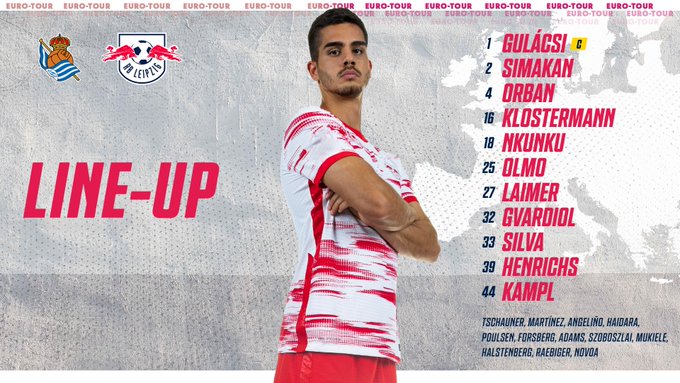 Real Sociedad is lined-up and will field: 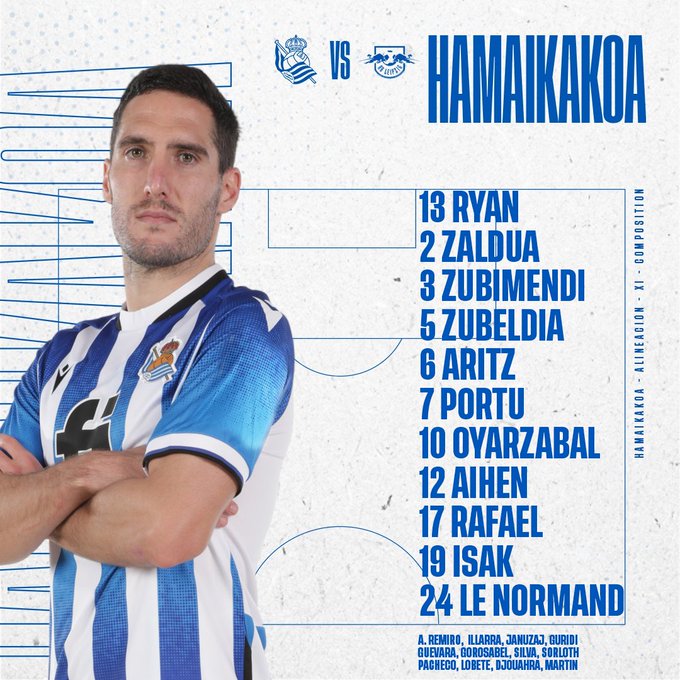 The broadcast of the Champions League Round of 16 match between Real Sociedad and RB Leipzig begins now!

Do not miss a detail of the match with the live updates and commentaries of VAVEL. Follow along with us all the details, commentaries, analysis and lineups for this Real Sociedad vs RB Leipzig match.
12:41 PM3 months ago

If you want to watch the game Real Sociedad vs RB Leipzig live on TV, your options is: none.

What time is Real Sociedad vs RB Leipzig match for Europa League?

This is the start time of the game Real Sociedad vs RB Leipzig of 24th February 2022 in several countries:

Anthony Taylor will referee the match with assistants Gary Beswick and Adam Nunn. Paul Tierney will be in charge of VAR, with the entire refereeing team coming from England.
12:26 PM3 months ago

The probable Leipzig team for the match will be: Gulacsi, Klostermann, Simakan and Gvardiol; Mukiele, Laimer, Haidara and Henrichs; Olmo, Nkunku and Poulsen.

Sociedad will be without the injured Barrenetzea, Nacho Monreal and Diego Rico, as well as Merino, who suffered a head injury and could be out, although there is no injury. Leizpig, on the other hand, will not be able to use Angeliño, who is ill, in addition to being without Halstenberg, who is injured.
12:11 PM3 months ago

RB Leipzig played two games and won both. On Friday (11) the first victory came, at home, over Cologne, by 3-1, with goals from Nkunku, Olmo and Angeliño, while Lemperle scored. Finally, last Sunday, the victory was a thumping victory over Herta Berlin. Henrichs opened the scoring, Jovetic equalized and then came the flurry of goals after Kempf's dismissal by Herta. Nkunku (2), Dani Olmo, Haidara and Poulsen scored to make the score 6-1.
12:06 PM3 months ago

In the last two games besides the first leg of the round of 16 Real Sociedad won one and was defeated in the other. On Sunday (13), the victory was 2-0, over Granada, with goals from Oyarzabal and Rafinha. On the last Sunday (20) came the defeat, 4-0, to the biggest rival: Athletic Bilbao. The goals were scored by Vivian, Sancet, Iñaki Williams and Muniain.
12:01 PM3 months ago

The first leg was last Thursday (17), at the Red Bull Arena Leipzig and ended 2-2, with Le Normand opening the scoring, Nkuku equalizing, Oyarzabal putting Real Sociedad ahead once again and, finally, Forsberg closing the score in a draw again.
11:56 AM3 months ago