HER2
END17 hours ago

We end today's broadcast and invite you to follow us next time.
8:13 PM3 months ago

The victory of the Globo as a visitor and leaves it in the group of 4 that seek to qualify to the next round.

Boca never found the way despite having possession for a long time.

On the other hand, Huracán was more powerful offensively and took advantage of the chances it had. The team from Parques Patricios wins again at the Bombonera after 12 years.

Boca's collective soccer has been lost and they only try to play balls that have no effect and simply lose the ball.
8:07 PM3 months ago

Boca had only a few minutes left, and they were unable to find the key to open the defensive lock of their rival.
8:05 PM3 months ago

Five more minutes will be played in the second half.
8:03 PM3 months ago

All Huracan defends and waits in its own half, Boca plays with desperation, looking for crosses from anywhere and dividing the ball.
8:02 PM3 months ago

Candia's cross looking for Tobio, who when he was about to head the ball in front of the goal, a rival stepped forward and sent it to the corner kick.
7:59 PM3 months ago

Now it is goalkeeper Díaz who is injured, after coming out to cut a cross and colliding with Zeballos.
7:58 PM3 months ago

Izquierdoz had to retire and made way for Salvio.
7:56 PM3 months ago

Izquierdoz must leave the field of play to be treated after a collision with Cordero and suffering a cut on his eyebrow.
7:53 PM3 months ago

Tempers rise a bit, because Cristaldo and Fernández have a clash and both are cautioned.
7:52 PM3 months ago

Boca begins to hurry the game, they are down on the scoreboard and their people press from the stands.
7:47 PM3 months ago

Boca looked for it with Advíncula who crossed for Vásquez, but when he shot he could not give it direction and the ball went wide.
7:45 PM3 months ago

The cross from the right, Coccaro won a header in the middle of the area and sent it to the far post, where Rossi could not reach it.
7:45 PM3 months ago

Huracán was a bit livelier, and with a break down the right flank, they got a corner kick.
7:42 PM3 months ago

A cross from the left to the far post, Romero brought it down for Rojo, who came from behind and shot first time, to send it over the goal.
7:41 PM3 months ago

Zeballos faced the ball, entered the area from the left, when he tried to put in the cross, he hit it badly and the ball ended up hitting a wall of the goal defended by Díaz.
7:39 PM3 months ago

A corner kick for Boca from the left, the ball arrived dangerously through the air, there was a rebound and when Izquierdoz wanted to have possession to shoot, he ended up committing a foul.
7:36 PM3 months ago

Once again the intensity of the game drops, now it is a bit slow and predictable the way Boca plays, who has the ball the most.
7:34 PM3 months ago

Boca took a free kick to the far post from the left flank, the ball went in tight and was just short of going down and into Díaz goal.
7:32 PM3 months ago

A corner kick was taken for the visitors from the left flank, goalkeeper Rossi came out to cut, but miscalculated and the ball went straight in and Cóccaro almost deflected it into the goal.
7:30 PM3 months ago

Boca's intensity was short-lived and the game was once again played in the midfield.
7:28 PM3 months ago

Boca controls the match and starts to play close to Huracan area.
7:27 PM3 months ago

Sández and Ramírez joined forces and reached the edge of the area, where the latter shot, but the ball hit a rival and went to the corner.
7:23 PM3 months ago

The same way of playing of the first half continues, where Boca has the possession but does not do any damage, Huracán waits a bit and does not suffer the game.
7:21 PM3 months ago

The second part of the second half began uneventfully.
7:20 PM3 months ago

The ball is moving in the La Boca neighborhood and the last 45 minutes of this match are being played.
7:03 PM3 months ago

A hard-fought match, with more possession for Boca, but with Huracán generating more danger, without saying that they made their rival suffer.

Few actions in the box and a lot of tactical play that did not allow to open the scoreboard in these first 45 minutes.

1 more minute will be played in this first half.
7:00 PM3 months ago

Romero took a shot and the ball went very close to the crossbar, hit the net and gave the optical illusion that it was a goal.

The visitors were saved.

There is a free kick for Boca, very close to the opponent's area and this generates danger for Díaz goal.
6:55 PM3 months ago

Boca is very predictable in the final quarter, where it ends up with crosses from both flanks, but they are destined for the opposing goalkeeper.
6:54 PM3 months ago

A lot of Boca possession, little depth and the percentage is 60% for the home team and 40% for the visitors, who have had the clearest chances.
6:52 PM3 months ago

The game settled down a little in Boca's half, with long possessions by Huracán, but without generating danger.
6:49 PM3 months ago

Last minutes with a lot of play in the midfield and that does not allow one of the teams to manage the game.
6:47 PM3 months ago

Without being a game with many plays in the box, the match is dynamic and with a good rhythm in this first half hour of play.
6:46 PM3 months ago

A cross from the left by Fernández, Orsini tried to shoot it first time inside the area and the ball ended up over Huracán's goal.
6:43 PM3 months ago

Boca gets a bit complicated at the start and ends up giving the ball away very close to Rossi's area.
6:41 PM3 months ago

Boca has a good collective game until the last quarter, where it lacks depth and Huracán does not suffer the game.
6:40 PM3 months ago

The visitors are still better offensively, but after 20 minutes, the game is still tied.
6:37 PM3 months ago

Without having so much of the ball, Huracán generated more danger than their rival and every time they approached Boca's area, there was danger to Rossi's goal.
6:35 PM3 months ago

Candia's shot from half distance and the ball goes a little wide.
6:33 PM3 months ago

Huracán takes a breather, has possession in midfield and tries to reach the opponent's area with short, horizontal passes.
6:30 PM3 months ago

Everything is played in the visiting team's field and Boca is getting dangerously close to goalkeeper Díaz's area.
6:28 PM3 months ago

Huracán pulls back a little, which allows Boca to have the ball more comfortably in midfield and try to open spaces.
6:26 PM3 months ago

Boca moves forward a bit, which has long possessions, circulation in midfield and then tries with a long vertical pass, to surprise on the flanks and reach the opponent's area.
6:25 PM3 months ago

There is still no clear dominator of the match, but perhaps Huracán has had better approaches to the rival goal, that gives them confidence and in that way they seek to open the scoreboard.
6:23 PM3 months ago

High pressure from the visitors, forcing Boca to play long and trying not to lose the ball in the danger zone.
6:21 PM3 months ago

The visitors had a chance when Cóccaro received a cross from the right, the player headed, but the goalkeeper was well stopped and made an easy save.
6:19 PM3 months ago

Boca started the first minutes with ball circulation, offensive attitude and a rival waiting for them in their own field.
6:17 PM3 months ago

The ball was moved and the match between Boca and Huracán has already started.
6:12 PM3 months ago

The captains' draw has been made, everything is ready and the only thing missing is the referee's order to start tonight's match.
6:11 PM3 months ago

Teams to the court and Protocol acts

The teams come out, the souvenir photos are taken and everything is ready to start.
6:05 PM3 months ago

Teams in the mixed zone, the players greet each other, they are friends and colleagues, only the order of the central referee is missing, so that they go out to the field and the match begins.
5:56 PM3 months ago

Everything is ready for the teams to take the field, it is expected that at any moment they will be in the mixed zone and together with the referee team, they will take the field to start tonight's match.


The stadium has a good atmosphere and the only thing missing is for the protagonists to move the ball.

The players will go to the dressing room, change and go to the mixed zone where the referees will give the signal for them to take the field.
5:52 PM3 months ago

The warm-up continues, both teams play 'little games' with the ball and begin to end the warm-up.
5:50 PM3 months ago

The teams are about to take the field to begin their respective warm-up, first they will do it physically, then they will work with the ball.
The goalkeepers will work separately.
5:50 PM3 months ago

This is how Huracán presents its headlines 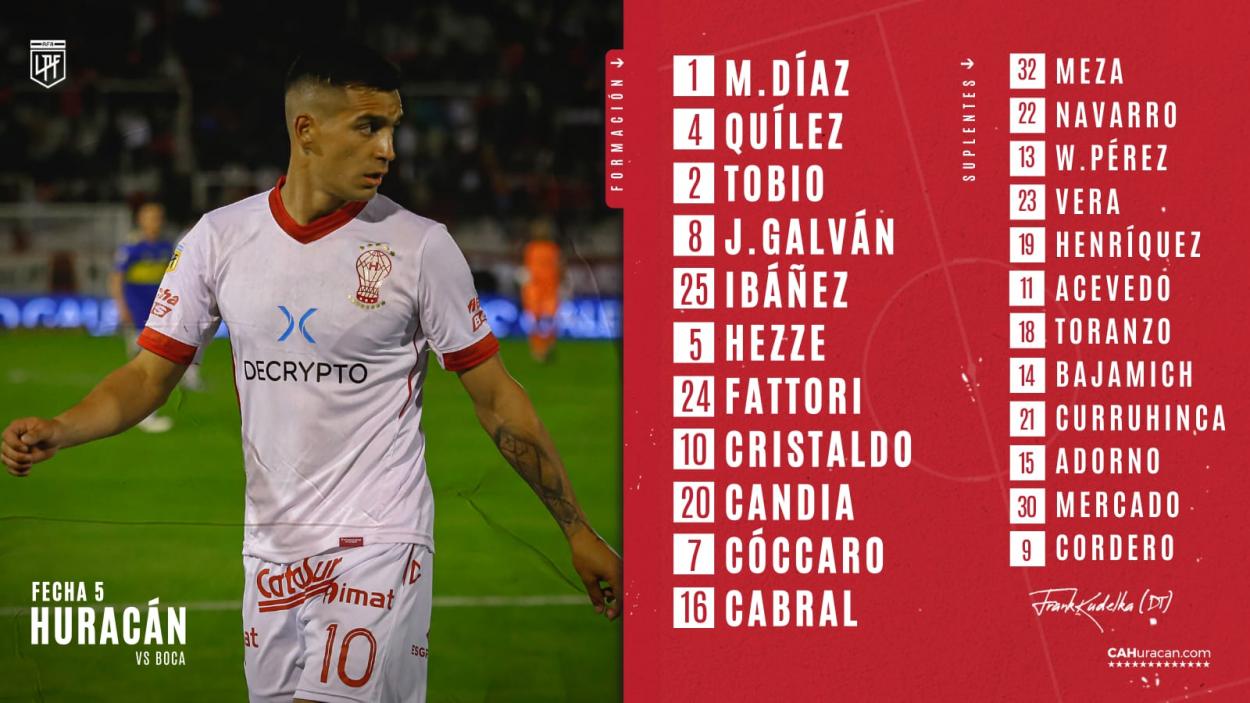 This is how Boca Juniors presents its headlines

Teams arrive at the Bombonera

Both teams have already left their respective hotels, where they had their training camp prior to today's match, and are about to arrive at the stadium in the La Boca neighborhood.
5:33 PM3 months ago 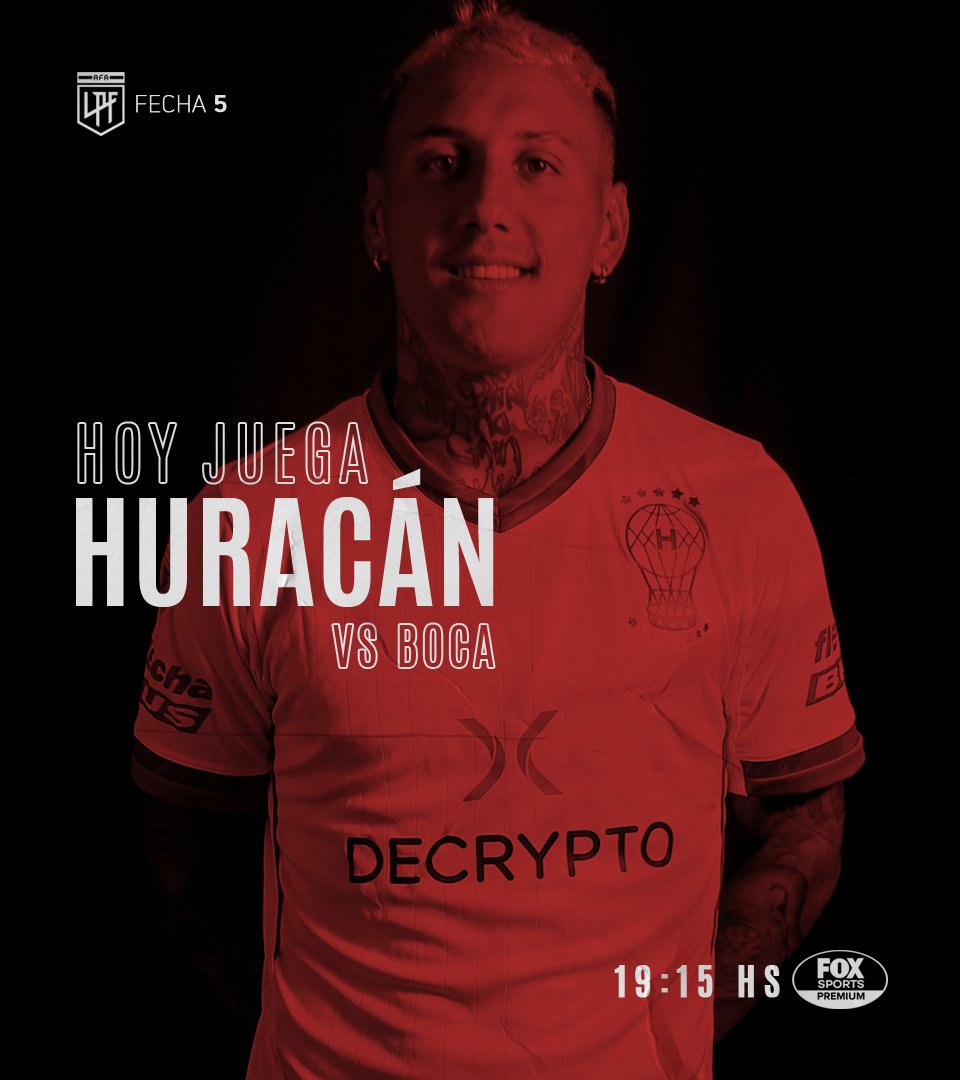 previous of the premises

The teams are already living with intensity this game corresponding to day 5 of group B in the first phase of the Copa de la Liga Argentina 2022, the teams are using social networks to live a preview with their fans and have a good relationship with their supporters.

In a few moments we will share with you the starting lineups for the Boca Juniors vs Huracan live match, as well as the latest information from the Estadio la Bombonera. Stay tuned for up-to-the-minute live online coverage of the match on VAVEL.
2:50 AM3 months ago

How to watch Boca Juniors vs Huracan live?

What time is Boca Juniors vs Huracán? 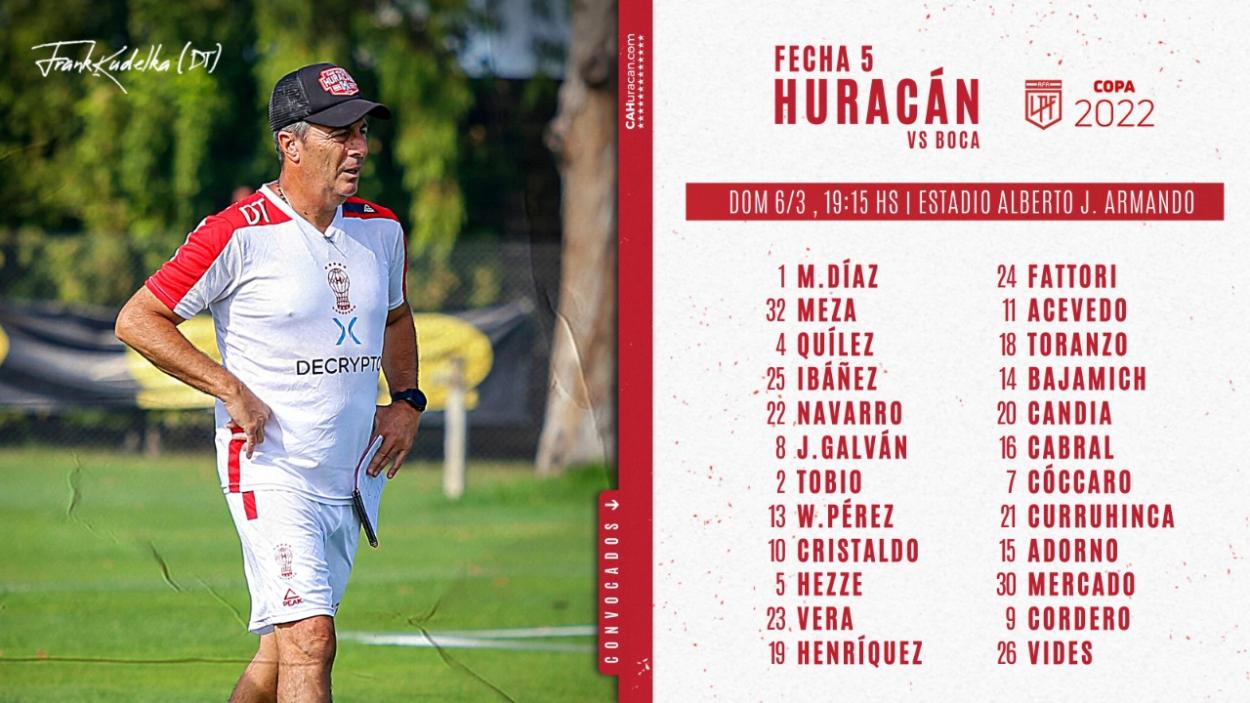 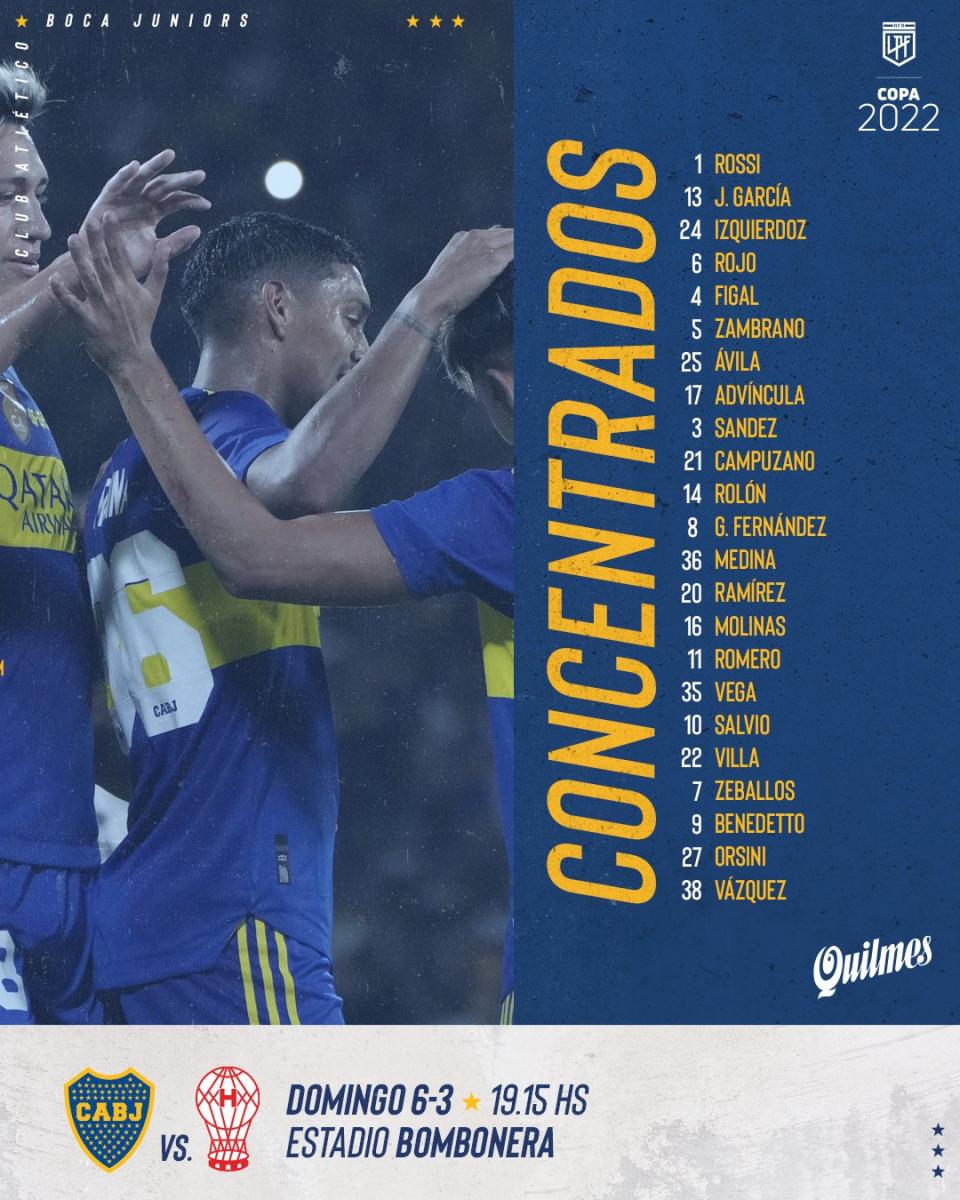 On 91 occasions Boca won the 3 points.

Huracán and its need for 3 points

The Globo needs the 3 points to get into the group of those qualified to the next round of the Cup.

The visitors are in sixth place, with 6 points and +1 in goal difference. This is the result of 2 wins and 2 losses.

After this match, they will host Godoy Cruz on date 6.

Boca and its ratification in the upper zone of group B

The Xeneixe team wants to remain in the upper zone of group B, currently third with 8 points and a goal difference of +2, product of 2 wins and 2 draws.

After this match, they will visit Estudiantes on date 6.

The match will be played at the Bombonera

The Alberto J. Armando Stadium, popularly known as La Bombonera, is a soccer stadium belonging to Club Atlético Boca Juniors, located in the neighborhood of La Boca in the city of Buenos Aires, Argentina.

Hello everyone! Welcome to the broadcast of the match between Boca Junior vs Huracán, corresponding to date 5 of the Copa de la Liga Argentina.
My name is Andrés Mesa and I will be your host for this match. We will provide you with pre-match analysis, score updates and live news here on VAVEL.