HER2
END18 hours ago

We hope you enjoyed our coverage of Mazatlan vs. Leon for Liga MX matchday 11. Continue to visit the VAVEL website to stay up to date with all the information that comes up throughout the day.
1:03 AM2 months ago

The match from Mazatlán comes to an end, León wins the away game and obtains three important points that put them back in the fight for the playoffs.
12:52 AM2 months ago

Final stretch of the match. Mazatlan tries but fails to equalize. León close to scoring three points again
12:49 AM2 months ago

All bets are off! Last changes for Mazatlan, Sansores for Meráz and Rubio for Sosa.
12:46 AM2 months ago

Leon's third substitution, Meneses comes off for Federico Martinez. Good game for the Chilean
12:40 AM2 months ago

First two changes for La Fiera, Barreiro for Kagelmacher and 'Avión' Ramírez for Ormeño
12:36 AM2 months ago

Mazatlán tries to attack from the flanks with Benedetti, who has already generated two dangerous plays in Cota's area.
12:30 AM2 months ago

Yellow card for Ormeño after bringing down a Mazatlán player with a tackle.
12:30 AM2 months ago

Yellow card for Víctor Dávila after cutting off a dangerous Mazatlán advance. The game is on
12:26 AM2 months ago

GOOOOOL FOR MAZATLAN! Meráz made a great cross shot after a good pass from Sosa. The Porteños are getting closer
12:21 AM2 months ago

Bello again! The Venezuelan is up for it again from outside the box, but Cota makes a two-timed save.
12:18 AM2 months ago

The match continues to be constantly stopped due to fouls being committed in the middle of the field.
12:16 AM2 months ago

Mazatlan made its first change for the second half. Iván Moreno replaced Montaño
11:54 PM2 months ago

GOOOOOOAL FOR LA FIERIA! Ormeño takes advantage of a rebound in Vikonis's area and increases the lead at the Kraken with a half-volley.
11:50 PM2 months ago

GOOOOOOOOOOOOOOOOOOOOL FOR LEÓN! Great cross from Mosquera for Colombatto to finish inside the box. The Fiera wins it already
11:45 PM2 months ago

New foul in the match. Padilla, who already has a yellow card, stomps on Meneses. Free kick for La Fiera
11:42 PM2 months ago

A back and forth match. Both teams approach the area, however, the plays are not dangerous.
11:36 PM2 months ago

Another yellow card in the match. Kagelmacher leaves a souvenir for Sosa. The fourth official warned the center referee because he did not see the action.
11:33 PM2 months ago

Yellow card for Benedetti after cutting off a counter-attack by León
11:32 PM2 months ago

MAZATLAN COMES CLOSE! Sosa's header inside the box is deflected for a corner kick by Ormeño.
11:31 PM2 months ago

New foul for Mazatlan, another dangerous free kick for the Porteños
11:30 PM2 months ago

First yellow card for Mazatlán. Padilla commits a foul on Meneses and receives a yellow card.
11:28 PM2 months ago

Colombatto knocks down the Mazatlan player. Important free kick for the home team
11:26 PM2 months ago

Mena was fouled after a collision with Carlos Vargas on the right flank. First yellow card for La Fiera
11:22 PM2 months ago

A very tight game in the midfield, both teams try to get out at speed but the defenses stop the advances.
11:19 PM2 months ago

Corner kick in favor of the Panzas Verdes that is correctly denied by the Mazatlan defense.
11:17 PM2 months ago

Handball by Bello, who falls inside the area looking for a penalty kick.
11:13 PM2 months ago

Foul on Ambriz. Benedetti knocks down the player in the middle of the field.
11:12 PM2 months ago

First foul of the game, Colombatto is kicked by Vidrio.
11:00 PM2 months ago

The match kicks off from Mazatlán, the cañeros receive the fiera in the closing match of Day 11 of the Liga MX.
10:45 PM2 months ago

These are the eleven men that León is sending to the field to face Mazatlán at the Kraken.

Club Leon in the 10th match of the Primera Division round. Clausura will be located in the middle of the championship table. At the moment, this team is in 7th place in the table with 15 points, having 4 wins, 3 draws and 3 losses. It is important to keep in mind that only with a little more stable performance this team could have more impressive results. Their goal average for the season is 0.9 goals scored and 1 conceded per game.
10:35 PM2 months ago 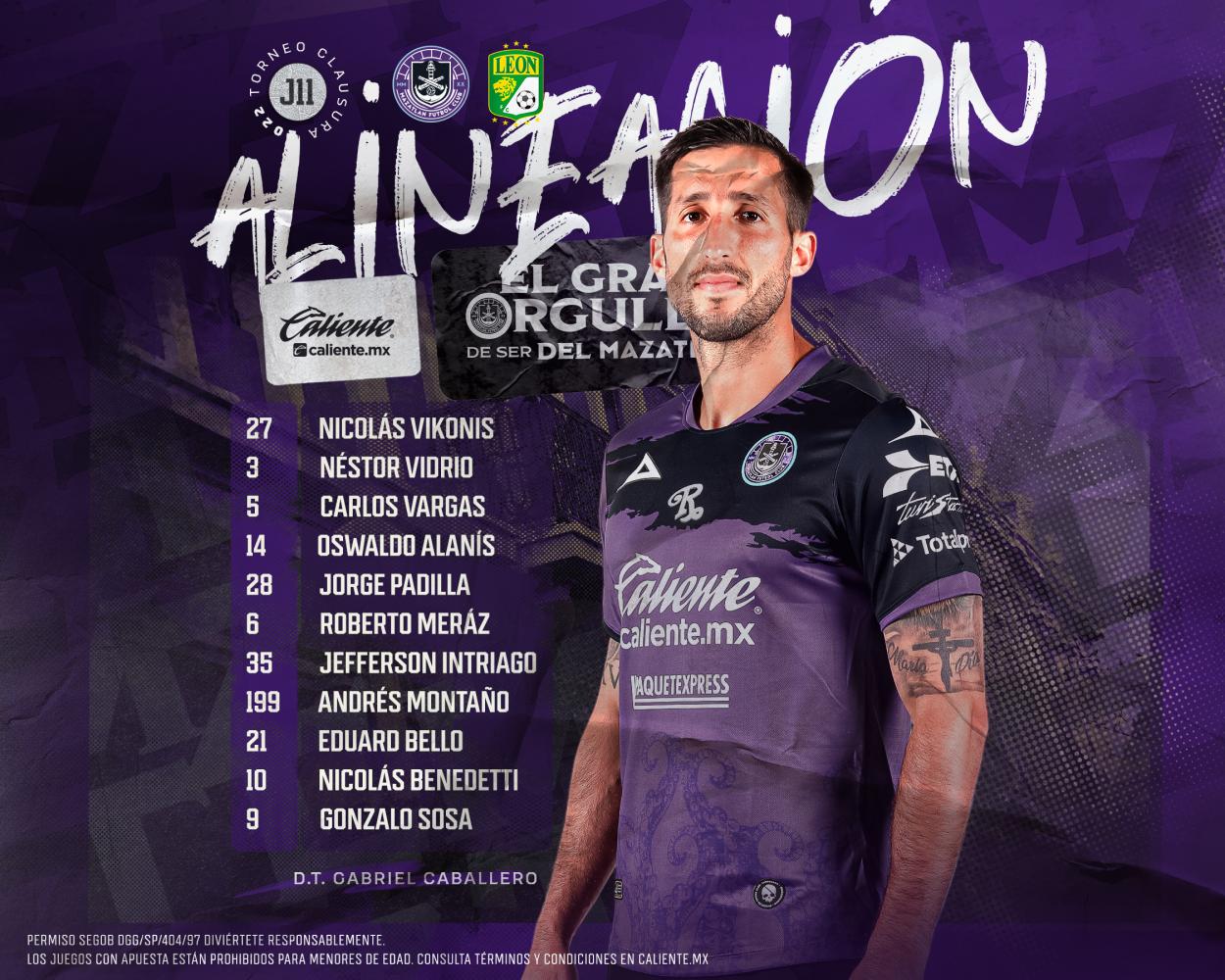 Last place is the worst thing that can happen to any team in a championship, so Mazatlan FC's position now definitely can't be worse. This team managed to collect a total of 7 points in the Primera Division. Clausura. 2 wins, 1 draw and 6 losses in 9 games. The low effectiveness of the team corresponds to this difficult situation: in total, they score 1.1 per game, while they concede - 1.9. The most difficult period for the team is between the 1st minutes, when they concede the most goals: 52.
10:28 PM2 months ago

ONE OF THE PLAYERS TO WATCH

Roberto Meráz will be one of the players to watch for this duel, he has an 86% accuracy in his passes which makes him an extremely dangerous midfielder at the time of attack. 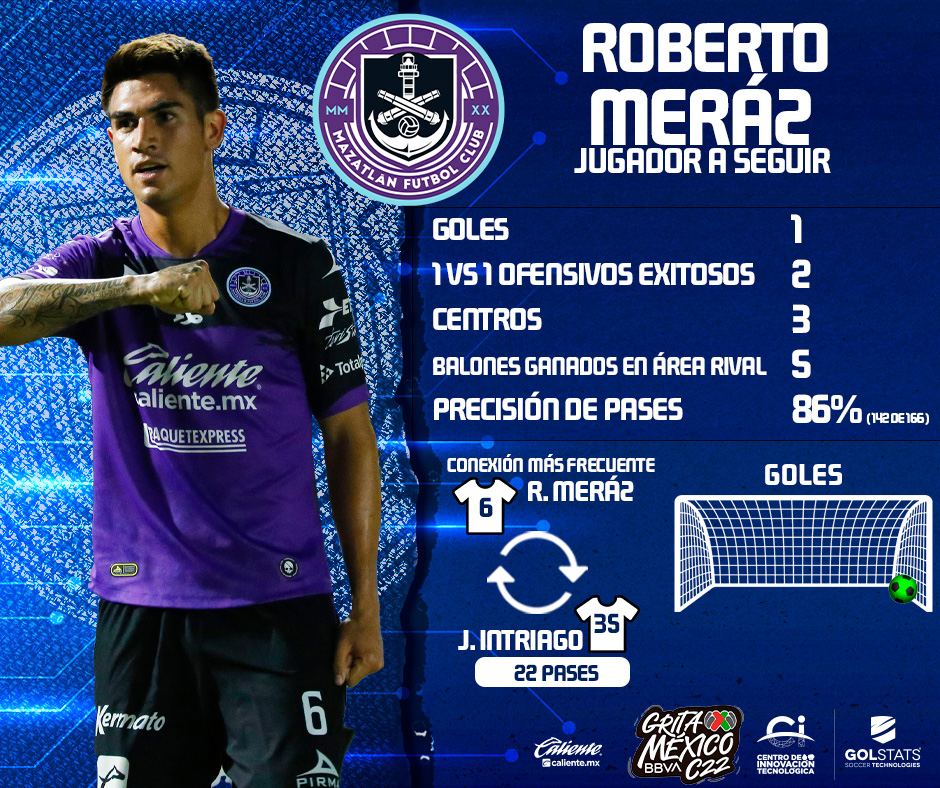 The teams played 31 matches between them, in which 10 ended as the winner in 10 matches, while Club Leon celebrated success in 12 matches, also in 9 games the teams could not identify the strongest and ended them in a draw. The last confrontation between them took place on August 14, 2021 and ended with the score 3:0. The statistics of goals scored and conceded indicates the following results: 47-61.
10:01 PM2 months ago

The wait is over, the Liga BBVA MX is back in action with the duel between Mazatlan's cañeros and Leon's panzas verdes. Both clubs will be looking for three points before the FIFA break, so it will be very important how they perform during these 90 minutes.
11:51 AM2 months ago

Do not miss a detail of the match with the live updates and commentaries of VAVEL. Follow along with us all the details, commentaries, analysis and lineups for this Mazatlan vs Leon match.
11:46 AM2 months ago

What time is Mazatlan vs Leon match for Liga MX?

This is the start time of the game Mazatlan vs Leon of 20th March in several countries:

Watch out for this León player:

Ángel Mena is one of the most experienced and popular killers that plays in Liga MX, throughout this season he has totaled 2,337 minutes that are divided into 29 games, 11 goals, 4 assists and 6 yellow cards. For this match, he will be the player to watch as he will be able to tip the balance in León's favor and give them the victory. 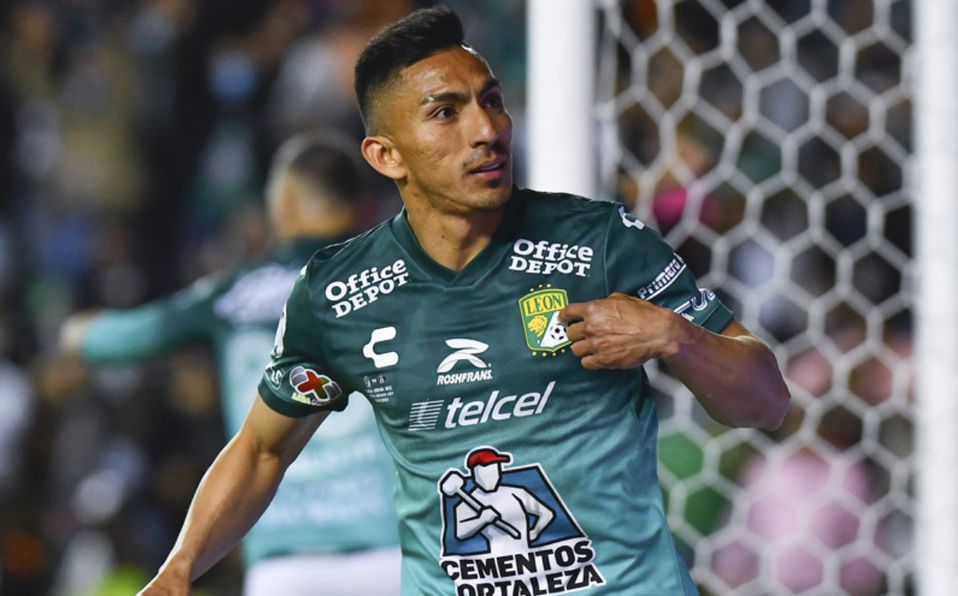 Watch out for this Mazatlán player:

For this match, Nicolás Benedetti will be the player to watch for Mazatlán FC, the former América player and Colombian national team player will be looking to make the difference in the midfield for the cañeros. Currently, Nicolás Benedetti has 9 games played so far in the tournament, 2 goals, 1 assist and 3 yellow cards, so due to his consistency, he could change the course of the game at any moment and give Mazatlán the win. 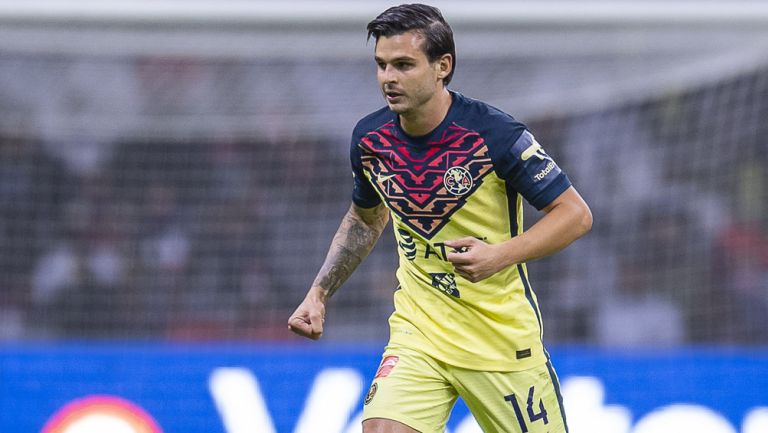 Mazatlán and León have faced each other on only three occasions (2 wins for the fiera and 1 win for Mazatlán) where the advantage leans in favor of the panzas verdes, likewise, in goals, it is the León side who has the advantage with 8 goals scored over 5 cañeros. Their last meeting dates back to the Apertura 2021 Tournament on Matchday 4, where León defeated Mazatlán 3-0 at the Nou Camp.
11:16 AM2 months ago

Mazatlan Soccer Stadium, also called El Kraken, is a soccer stadium located in the city of Mazatlan, Sinaloa, Mexico, was inaugurated on July 27, 2020 and has a capacity for 25,000 spectators, being used only 20,195 seats, it is the home of Mazatlan FC, which plays in the First Division of Mexico from the Apertura 2020 Tournament.

In 2017, construction work began on a soccer stadium in the city of Mazatlán as part of a project to build and modernize various sports venues in the state of Sinaloa.

On July 27, 2020, the first game in the stadium's history was played, with a match between Mazatlán Fútbol Club and Club Puebla corresponding to day 1 of the Guard1anes 2020 Tournament, the score ended with a 1-4 victory in favor of the Puebla team, the first goal scored in this venue was scored by player Santiago Ormeño.

León seeks to secure the playoffs

Despite their defeat against Tigres last Saturday at the Nou Camp, León remains firmly in the upper part of the table, in sixth place overall with 15 points obtained as a result of 4 wins, 3 draws and 3 defeats. Likewise, their statistics show 9 goals for and 10 goals against, leaving them with a negative goal difference of -1 goal difference.
11:06 AM2 months ago

The cañeros are looking to improve

After a poor performance throughout this Clausura 2022, the cañeros will be looking to close the tournament with all their might in order to seek a place in the Mexican championship playoffs and continue with the dream of being champions in the current competition. After having a change in technical direction, hope is being renewed in the port after losing to Monterrey by 2-1, they will be looking to win against León at home and in the company of their fans. Mazatlán currently has 7 points from 9 games played, divided into 2 wins, 1 draw and 6 defeats. They also have an average of 10 goals and 17 goals, leaving them with a goal difference of -7.
11:01 AM2 months ago

The second half of the tournament begins

Liga MX has already passed the first half of the tournament and the teams are slowly starting to focus on fighting for a place in the big party or in the playoffs of Mexican soccer. On this 11th date it will be the turn of the Panzas Verdes and the Cañeros to face each other, both clubs have completely different realities, as León is in the playoffs zone and has a good chance of getting into the Liguilla. Mazatlán, on the other hand, is sunk to the bottom of the general table and although there is still hope of reaching the playoffs, they will have to improve in the remainder of the regular phase.
10:56 AM2 months ago

The Mazatlan vs Leon match will be played at The “El KraKen” Stadium, in Mazatlan, Sinaloa. The kick-off is scheduled at 22:00 pm ET.
10:51 AM2 months ago

Welcome to VAVEL.com’s LIVE coverage of the 2022 Liga MX: Mazatlan vs Leon!