We end tonight's broadcast and invite you to follow us next time.
4:42 PM25 days ago

Sheffield United won and secured at least a place in the playoffs.

The visitors played better, took advantage of the chances they had and took the 3 points.

The home team will have only a few minutes left to try to tie the game, but it seems impossible.
4:39 PM25 days ago

Berge's cross from the right flank to the far post, where Hourihane arrived alone and comfortably for a first-time right-footed shot that the home goalkeeper could do nothing about.
4:38 PM25 days ago

Fleck falls to the ground and medical attention must be brought in to help him stand up and leave the field of play.
4:35 PM25 days ago

A cross from the left into the visitors' box, the goalkeeper came out to cut it out, but left the rebound and when Thomas arrived to shoot, the defense cleared it.
4:32 PM25 days ago

The home team has come out on top, is playing close to the opponent's area and wants to salvage a point at home.
4:29 PM25 days ago

A marking error by the visitors, a ball ended up inside the area where Thomas shot and the ball hit the crossbar.
4:27 PM25 days ago

QPR doesn't seem to have the offensive power to hurt their opponents, creating short partnerships to try to reach the opponent's box, but Sheffield Wednesday's defensive line looks stronger.
4:26 PM25 days ago

We started the final stretch of the game and the visiting team is looking to widen the gap on the scoreboard.
4:23 PM25 days ago

Another corner kick for Sheffield, which has now reached 12 corners in this match.
4:21 PM25 days ago

A free kick in the middle of the field was taken short, then the ball was sent to the right post, headed back to the middle, where Robinson arrived with great strength and won through the air to make it 1-2.
4:20 PM25 days ago

The visit presents a change: In: Osula Out: Ndiaye For the home team there are changes: In: Kakay and Thomas Out: Amos and Dozzell
4:12 PM25 days ago

The intensity of the game drops, there is a lot of ball fighting in the midfield and the game is often cut short with wrong passes and fouls.
4:11 PM25 days ago

Berge's shot from inside the box failed to find the target and went over the QPR goal.
4:08 PM25 days ago

The home side push forward a little, come out of their own half and the game starts to go back and forth, just like the end of the first half.
4:06 PM25 days ago

The intensity of the game drops a little, the match is still tied and Sheffield is playing better in the last minutes.
4:05 PM25 days ago

A change is made at QPR, Austin, scorer of the goal, comes off and gives way to Dykes.
4:03 PM25 days ago

Gibbs-White's individual play on the right flank was played to Ndiaye, who took a first-time shot, but the ball hit a defender and went to the corner.
4:02 PM25 days ago

Gibss-White falls to the ground and must be attended to by the team's medical staff in order to recover and rejoin the game.
4:01 PM25 days ago

Again QPR is saved, now it was a free kick from the left, the ball was closing and Gibbs-White won the header and the goalkeeper had to intervene to prevent the second goal of the rival.
3:59 PM25 days ago

A corner kick from the right, there was a rebound in the area that nobody caught and there was the striker to push it in with his right foot and make it 1-1.
3:58 PM25 days ago

Sheffield attacking wave that wants the equalizer as soon as possible. Lacking effectiveness, but close to escaping.
3:54 PM25 days ago

Again QPR was saved, now it was Robinson who won in the air, the ball was heading for goal and the goalkeeper jumped and saved with his right hand, to send the ball to the corner.
3:52 PM25 days ago

The visitors had a chance with a shot in the box by Ndiaye, but the ball hit a rival and prevented the ball from going in the direction of the goal.
3:50 PM25 days ago

Long possession for the home side, who are looking to control the game with the ball at their feet.
3:50 PM25 days ago

The last 45 minutes of this match between QPR vs Sheffield Wednesday kick off, with the home side winning for now. 1-0.
3:33 PM25 days ago

A hard fought game in the middle of the field, in which Sheffield has played a little better, but the lack of effectiveness and depth, has them down on the scoreboard.

On the other hand, Queens Park Rangers came from less to more and took advantage of the clearest opportunity they had, to go up on the scoreboard and be partial winner for the moment.

QPR are holding up well, not suffering too much in the game, letting the minutes go by and getting closer and closer to the end of the first half.
3:26 PM25 days ago

Ndiaye's shot from the edge of the box went just wide of the home side's goal and Sheffield missed what was a partial equalizer.
3:23 PM25 days ago

The home side concedes a lot of corners, with the fifth for the visitors, but none for QPR.
3:22 PM25 days ago

High pressure from the visitors, raising their lines and moving the block forward completely, in order to be able to recover higher up and not make so many runs with the ball.
3:20 PM25 days ago

White's shot after recovering the ball and unfortunately for his interests the ball went very slow and soft, so the goalkeeper kept it easily.
3:19 PM25 days ago

Sheffield tries to recover quickly from the goal against, but QPR is the one trying to take possession and put the game to bed.
3:17 PM25 days ago

Adomah's cross from the right, the ball went to the edge of the six-yard box and that's where Austin came from behind, anticipated the defense and headed in the first goal of the night.
3:16 PM25 days ago

Queens Park Rangers are starting to get a little more adventurous.
3:13 PM25 days ago

Possession starts to even out and the match becomes more closely contested.
3:11 PM25 days ago

The game became slow at times, the home team had very little offensive production and the visitors lacked the depth needed to create dangerous chances.
3:09 PM25 days ago

Cross from the left by Sheffield, White shot and apparently hit an opponent, but the referee gives possession to QPR and the visiting player claims.
3:07 PM25 days ago

QPR take a little breather and advance with dominated ball into the opponent's half.
3:02 PM25 days ago

Sheffield's play leans almost entirely to the right wing and that is where it has found its way into the final quarter of the field.
3:01 PM25 days ago

The game is played close to the QPR goal, but still without shots that represent a real danger.
2:58 PM25 days ago

More possession for Sheffield Wednesday, but still no shots on goal, and play on the edge of the box.
2:56 PM25 days ago

A lot is played in the middle of the field, there is no depth in the teams and dangerous actions do not appear yet.
2:54 PM25 days ago

It was difficult for the local team to come out with the ball under control, they did not get past midfield with ball possession and made easy delivery errors.
2:51 PM25 days ago

The visiting team's initial attacking intent was to get on the scoreboard, and they already had a corner kick on the right flank.
2:49 PM25 days ago

Sheffield tries to press high, to stifle their opponents and win the ball back quickly.
2:48 PM25 days ago

In the first few minutes of the match, there was no initial dominator, and the ball was played a lot in the middle of the field.
2:45 PM25 days ago

The ball is moved and the first 45 minutes of the match between QPR vs Sheffield Wednesday kick off.
2:44 PM25 days ago

The captains' draw has been made, everything is ready and the only thing missing is the referee's order to start tonight's match.
2:39 PM25 days ago

Teams on the court and protocol events

The referee gives the order and the two teams take the field together.
The anthems are played and after that the captains are drawn.
2:32 PM25 days ago

Teams in the mixed zone, the players greet each other, they are friends and colleagues, only the order of the central referee is missing, so that they go out to the field and the match begins.
2:26 PM25 days ago

Everything is ready for the teams to take the field, it is expected that at any moment they will be in the mixed zone and together with the referee team, they will take the field to start tonight's match.
The stadium has a good atmosphere and the only thing missing is for the protagonists to move the ball.
2:19 PM25 days ago

The players will go to the dressing room, change and go out to the mixed zone where the referees will give the signal for them to take the field.
2:15 PM25 days ago

The warm-up continues, both teams play 'little games' with the ball and begin to end the warm-up.
2:11 PM25 days ago

The teams are about to take the field to begin their respective warm-up, first they will do it physically, then they will work with the ball.
The goalkeepers will work separately.
2:10 PM25 days ago

This is how QPR presents its headlines 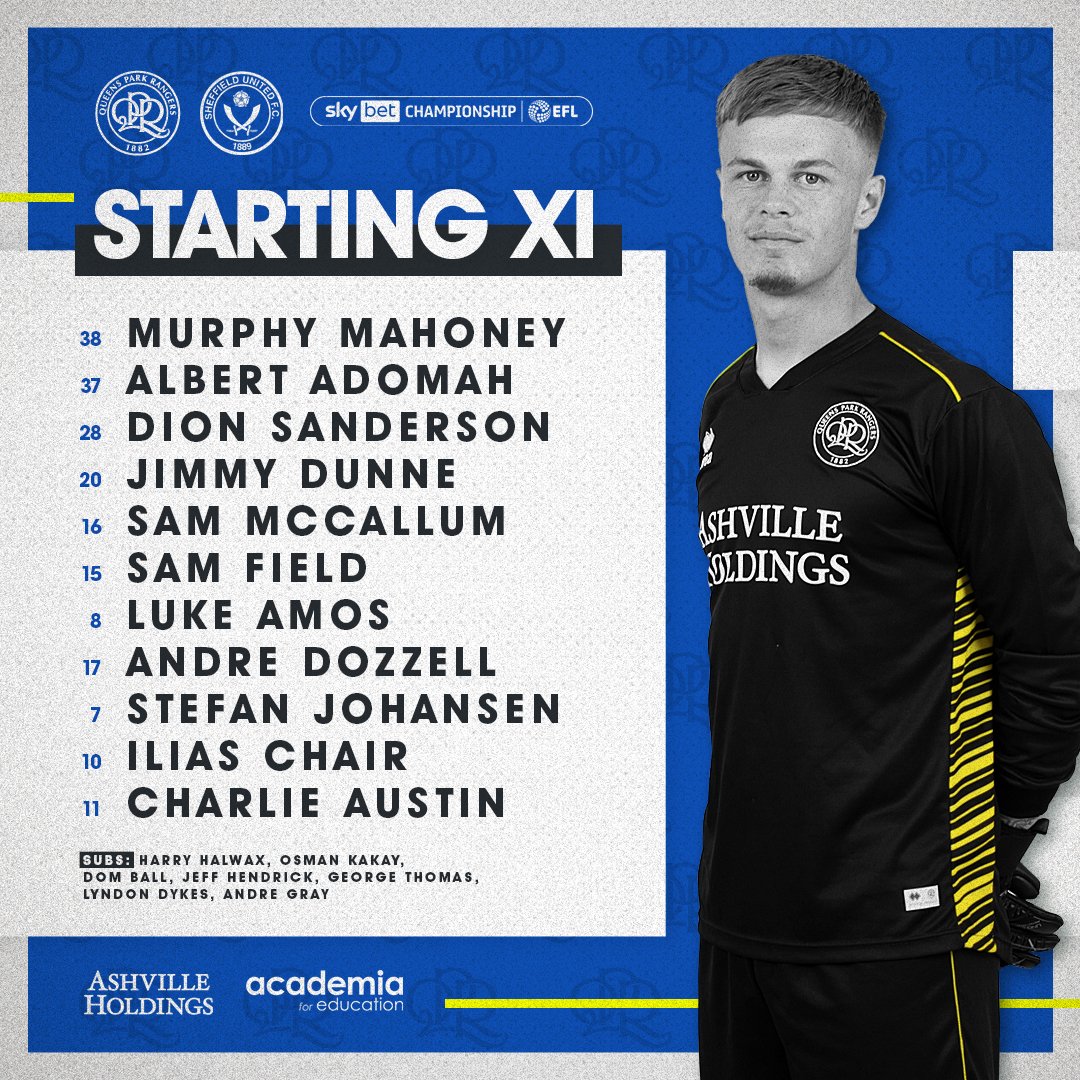 Teams arrive at the stadium

Both teams have already left their respective hotels, where they had their training camp prior to today's game and are about to arrive at the Kiyan Prince Foundation Stadium.
1:59 PM25 days ago 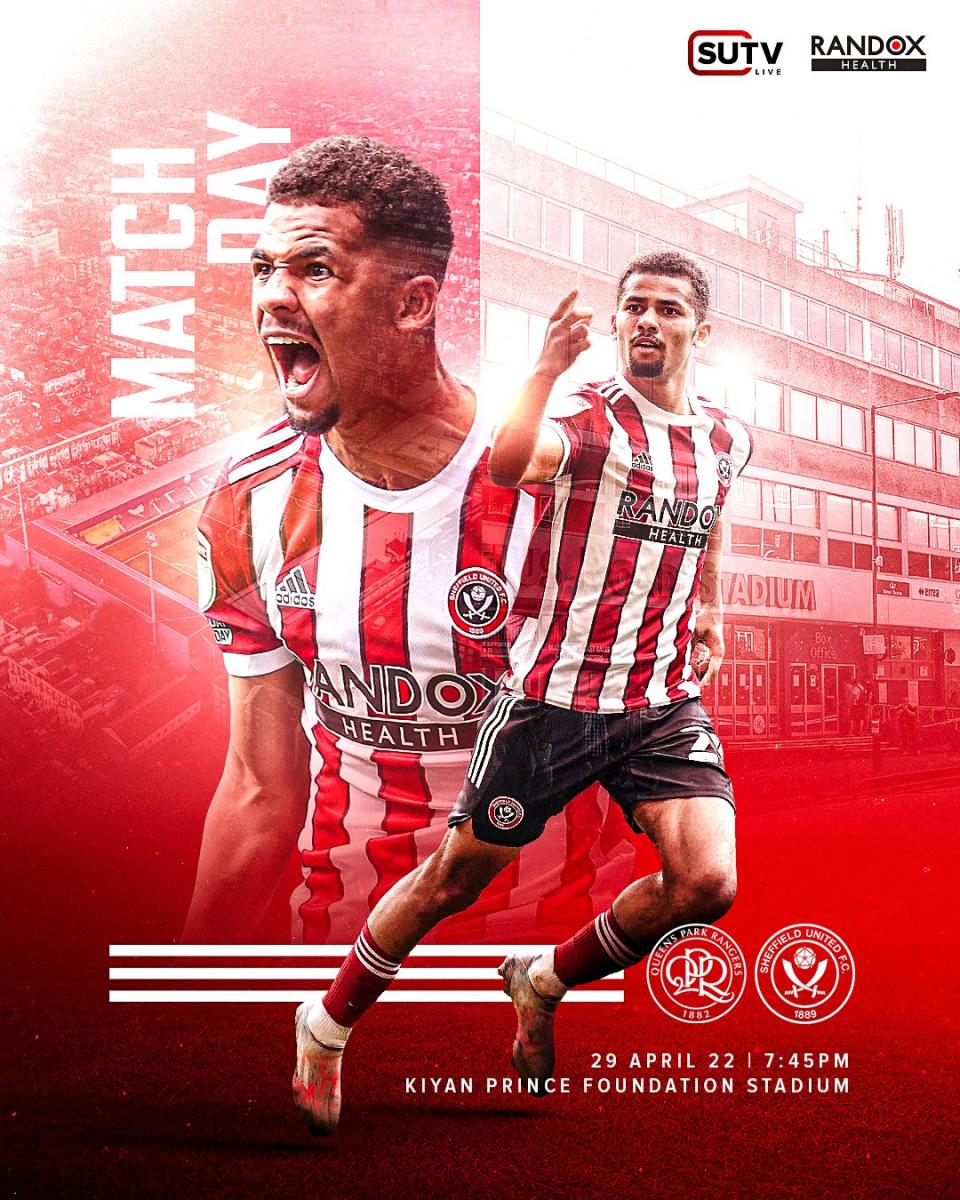 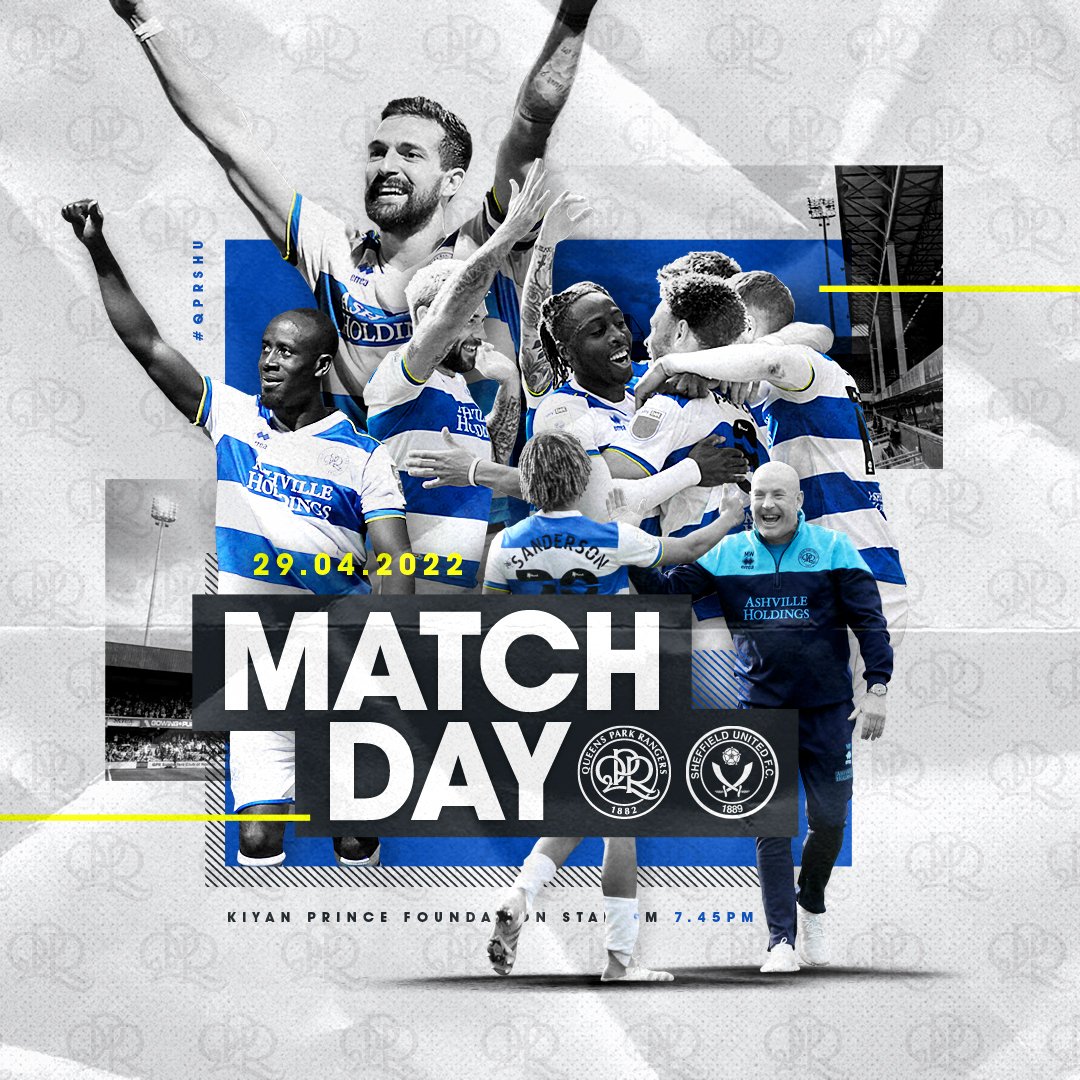 The teams are already living with intensity this game valid for the 45th date of the EFL Championship. The teams are using social networks to live a preview with their fans and have a good relationship with their supporters.
1:13 AMa month ago

Stay tuned to follow QPR vs Sheffield live on TV

In a few moments we will share with you the starting lineups for the QPR vs Sheffield live match, as well as the latest information from the Kiyan Prince Stadium. Keep an eye on the action with VAVEL's up-to-the-minute live online coverage.
1:08 AMa month ago

How to watch QPR vs Sheffield live?

What time is QPR vs Sheffield?

The highlight of the visit is their goal scorer, who has already reached 14 goals this season and 7 assists.

QPR Player of the Year

The standout is Lyndon Dykes, the striker is a key piece of the team and has already scored 8 goals in the season, in addition to 3 assists.

His average rating per game is 7.0.

The win is important for the away team, as it could secure a place in the play-offs for promotion.

QPR and the need for 3 points

QPR is currently 10th in the second division of English soccer, with 63 points after 44 rounds.

They must look for the 3 points if they want to get into the promotion battle.

The match will be played at the Kiyan Prince Stadium.

The Kiyan Prince Foundation Stadium is a soccer stadium located in London. It was inaugurated in 1904 and has a capacity of 18,200 people. 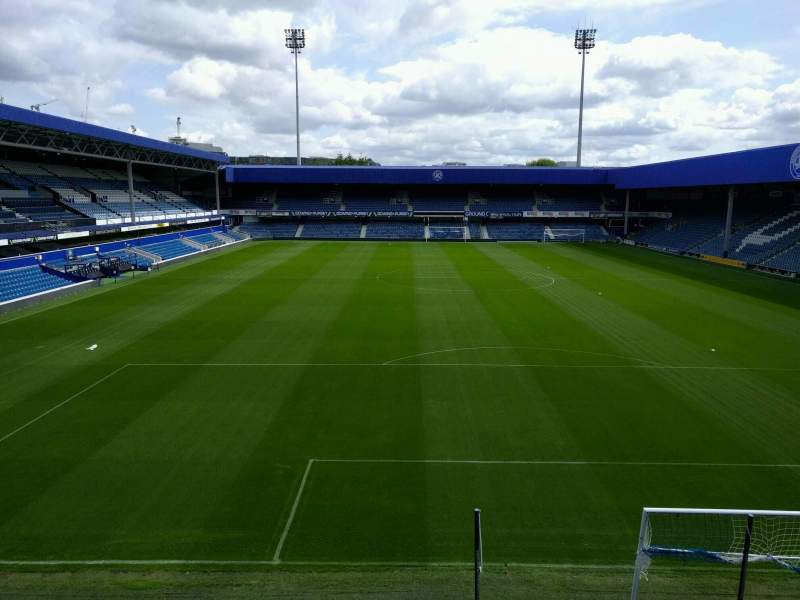 Hello everyone! Welcome to the live broadcast of the match QPR vs Sheffield Utd, valid for the 45th date of the EFL Championship.
My name is Andres Mesa and I will be your host for this match. We will offer you the pre-match analysis, score updates and live news, here on VAVEL.