Thank you here for your audience for another World Cup preparatory match. Stay tuned here on VAVEL for the repercussions of this game. Have a nice day and see you next time!

Brazil ruthlessly overcomes South Korea, scoring one more victory in the run-up to the World Cup!

Gabriel Jesus came from the right to the middle, sewing between the defenders and hit a hard cross into the right corner, with no chance for the goalkeeper, making one more for Brazil!
8:47 AMa month ago

Gabriel Jesus burst through the middle and left it for Matheus Cunha to beat and see Seung save it!
8:46 AMa month ago

Substitution in South Korea: out goes Hwang Heechan and in comes Kwon Chang-hoon.
8:43 AMa month ago

Son received the pass on the right and hit hard, but Weverton caught once more!
8:42 AMa month ago

Paquetá got the pass over the top to Coutinho, who hit it first time, without letting it fall, and sent it into the left angle, with no chance of defense!

Double substitution in Brazil: Neymar and Raphinha left for the entry of Coutinho and Gabriel Jesus.
8:36 AMa month ago

Neymar received on the half moon and left to Raphinha, who hit from outside the area and stamped the right post!
8:34 AMa month ago

Vini received on the left, went over the defender and hit it out, on the right side!
8:31 AMa month ago

Double substitution in Brazil: Casemiro and Richarlison left for Fabinho and Vinícius Júnior.
8:21 AMa month ago

And confirming that after the goal Korea made two substitutions: out came Paik Seung-ho and Lee Yong for the entrance of Jeong Woo-yeong and Kim Moon-hwan.
8:20 AMa month ago

On Brazil's exit error, Uijo took off and hit hard, but Weverton caught it and got the rebound too!
8:18 AMa month ago

In a replay of the first penalty kick, with even more cruelty as it brought Seung to his knees, Neymar scored Brazil's third penalty by sending it into the left corner, increasing the score!
8:16 AMa month ago

And the referee once again went to the VAR, as Alex Sandro, again, was brought down inside the area on a miskick by the defender and won another penalty kick for Brazil!
8:14 AMa month ago

Neymar got a beautiful pass through the middle to Paquetá, who hit a cross and saw Seung save with his foot!
8:07 AMa month ago

Uijo takes the first touch and we have the ball rolling for the second half of the friendly match!
8:07 AMa month ago

South Korea and Brazil return to the field unchanged to start the second half of the match!

With goals from Richarlison and Neymar, while Uijo even equalized, Brazil goes on to beat South Korea in a World Cup preparatory friendly!
7:48 AMa month ago

A corner kick from the left, taken by Neymar, was headed by Thiago Silva and the ball exploded off the crossbar! On the rebound Casemiro, in the small area, tried to deflect it and sent it over the goal!
7:44 AMa month ago

Neymar hit it low and without much power, only displacing Seung to the right corner, sending it to the left, to put Brazil in front once again!
7:44 AMa month ago

Between the goalkeeper's saves in the previous move Alex Sandro was touched and brought down inside the area, earning Brazil a maximum penalty!

Richarlison's powerful header from the middle of the pitch was deflected away by Seung, and the defender pulled it away. The play continued until Dani Alves' shot from outside the area, which Seung again kept out! And after all this the referee went to the VAR for a possible penalty for Brazil!
7:33 AMa month ago

Uijo received the pass through the middle, spun over Thiago Silva and hit it hard, in the right corner, with no chance for Weverton, equalizing the match!
7:28 AMa month ago

Richarlison claimed a penalty after being pulled in the box, the VAR reviewed and ordered play to continue. Brazil attacks Korea!
7:15 AMa month ago

In-Beom, after a blocked shot by Son, hit a hard shot from outside the area and saw Weverton save it on the right corner. In the rebound Son was without angle and even so tried the shot on goal, but sent into the hands of Weverton.
7:10 AMa month ago

In the theft of the ball on the edge of the area Paquetá got it, left to Neymar, who took the line, crossed to Raphinha, who hit and sent over the goal!
7:10 AMa month ago

Alex Sandro invaded the area passing two players and gave the pass to the back, where Fred arrived shooting, with deviation in Richarlison last, to the bottom of the goal!

Paquetá took a chance from outside the area and sent it into Seung's hands.
7:04 AMa month ago

In the first free-kick of the match, coming from the left, Raphinha raised it in the area and Thiago Silva headed for the goal, but he was offside and the Brazilian goal was disallowed.
7:02 AMa month ago

Richarlison makes the first touch on the ball and it rolls into the first half of the match!
6:53 AMa month ago

Now the national anthems of Brazil and Korea are played before the ball starts to roll.

Today's match will be at Seoul's Sang-am Stadium, or more famous as Seoul World Cup Stadium. The stadium was opened on November 10, 2001 and has a capacity of 66,704 fans. It was built for the 2002 World Cup, which Brazil later became champion of, and is used today by the South Korean National Team and FC Seoul. In the 2002 World Cup it hosted three matches: in group A France 0x1 Senegal, in group C Turkey 3x0 China and in the semifinal South Korea 0x1 Germany.
6:24 AMa month ago

The players take to the pitch to begin their warm-up.

Brazil is lined up and will field: 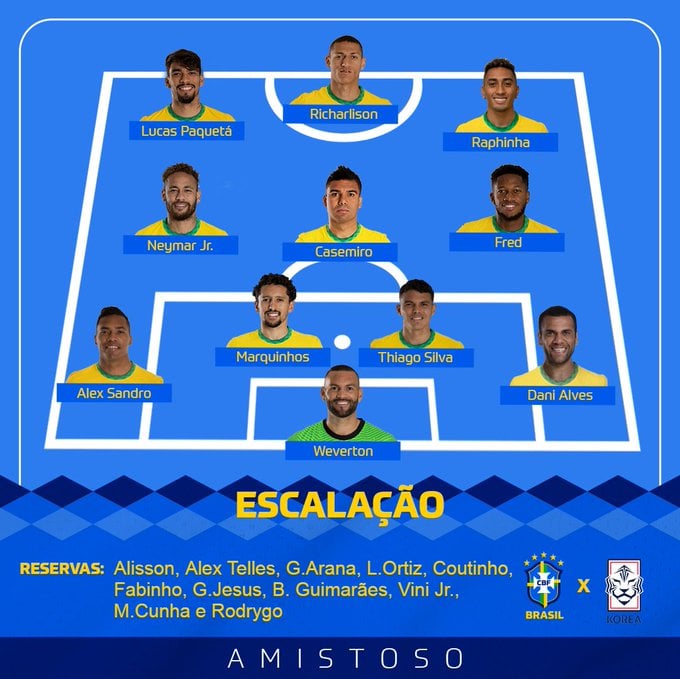 South Korea is lined up and will field: 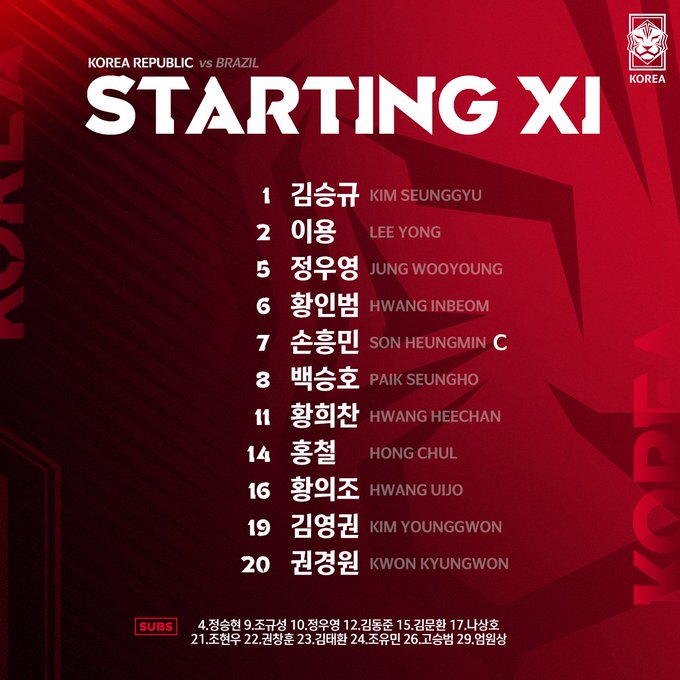 Now begins the broadcast of the friendly match between South Korea and Brazil, in preparation for the World Cup in Qatar, which will take place at the end of the year!

Do not miss a detail of the match with the live updates and commentaries of VAVEL. Follow along with us all the details, commentaries, analysis and lineups for this South Korea vs Brazil match.
5:56 AMa month ago

If you want to watch the game South Korea vs Brazil live on TV, your options is: none.

If you want to directly stream it: Streaming services and beIN SPORTS CONNECT app.

What time is South Korea vs Brazil match for International Friendly?

This is the start time of the game South Korea vs Brazil of 2nd June 2022in several countries:

Ryuji Sato will referee the match, with assistants Hiroshi Yamauchi and Jun Mihara, with the entire refereeing team coming from Japan.
5:41 AMa month ago

Brazil knows they will not be able to use Militão, who took longer to arrive after the Champions League final due to an inconclusive Covid-19 test, but later tested negative and was released, as well as Ederson, who is injured and out. Neymar remains a doubt due to foot pain after training and with this the possible Brazil for the match is: Weverton, Daniel Alves, Marquinhos, Thiago Silva and Alex Sandro; Casemiro, Fred and Lucas Paquerá; Raphinha, Neymar (Vinícius Júnior) and Richarlison. 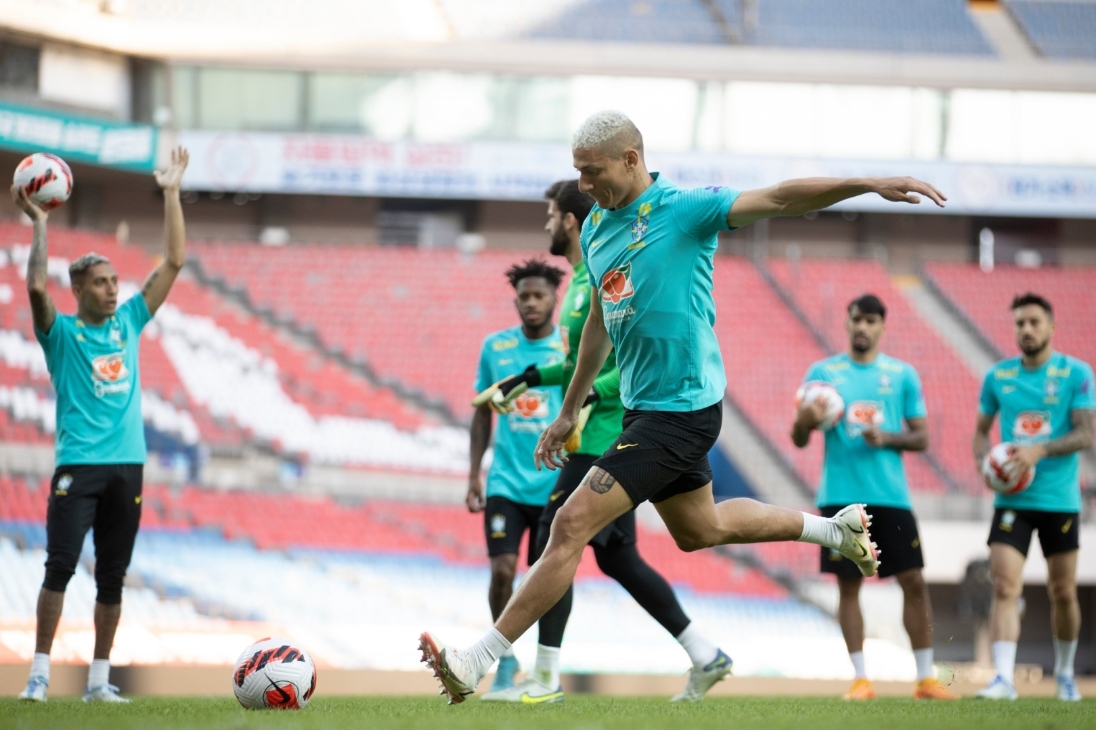 Tite, Brazil's coach, also praised the Korean team and predicted a quality match: "It will be a good show because of the characteristics of both teams, who like the game, to have possession of the ball. Korea is a well-integrated team because Paulo Bento has been there since the World Cup. The other result we had (against Korea in 2019) of 3-0 was dilated, maybe a result less than 3-0 would have been fairer".
5:26 AMa month ago

Paulo Bento, Korea's coach, commented on the opportunity to face Brazil and praised the Seleção Canarinho: "It's a great chance to play against the best team in the world. I will do my best in every aspect and I will focus on keeping the characteristics of the players to try to compete and fight well against a good team".
5:21 AMa month ago

In the World Cup Qualifiers, Brazil is in first place with 45 points from 17 games, with 14 wins and three draws, and 40 goals scored and only five conceded. Argentina is second with 29 points, as well as Uruguay with 28 points and Ecuador with 26. Peru qualified for the play-offs with 24 points. Colombia, with 23, Chile with 19, Paraguay with 16, Bolivia with 15, and Venezuela with 10 points closed the Qualifiers.
5:16 AMa month ago

In the third round South Korea went through in second place, going straight to the World Cup, with 23 points from 10 games, with seven wins, two draws and one loss, as well as 13 goals scored and three conceded. In first place went Iran with 25 points. The United Arab Emirates, with 12 points, went to the play-offs. Closing out the group were Iraq with nine points, and Syria and Lebanon with six points.
5:11 AMa month ago

Meanwhile, Brazil has also been playing in the South American World Cup Qualifying matches where it ruthlessly overcame its opponents, scoring three straight 4-0 results. The first was against Paraguay, on February 1st, with goals from Raphinha, Coutinho, Antony, and Rodrygo. The second was over Chile, on March 24, with Neymar, Vinícius Júnior, Coutinho, and Richarlison building the score. Finally, now away from home, on March 29, the victim of the turn was Bolivia, who suffered at the hands of Paquetá, Richarlison (2) and Bruno Guimarães.
5:06 AMa month ago

South Korea comes into the match on the back of two wins and one loss in recent matches. All those wins came in the Asian World Cup Qualifiers. The first was on February 1, 2-0 over Syria, with goals by Kim Jin-Su and Kwon Chang-hoon. It was also a 2-0 victory over Iran, on March 24, with goals by Son and Kim Young-Gwon. Finally, on March 29, the defeat came to the United Arab Emirates, 1-0, with a goal by Harib Al-Maazmi.
5:01 AMa month ago