I would like to thank you here for your audience in yet another Libertadores match. Stay tuned here for the repercussions of this game. Have a good night, and see you next time!
10:53 PMa month ago

Corinthians now awaits whoever comes from the Round of 16, in the match between Flamengo and Tolima, which takes place tomorrow at the Maracanã!
10:52 PMa month ago

RAMIREZ HIT THE RIGHT CORNER AND CÁSSIO FLEW TO PICK IT UP AND SEND IT OUT! GIL SENT IT INTO THE RIGHT CORNER, ROSSI HIT IT BUT IT DIED IN THE BACK OF THE GOAL, SENDING CORINTHIANS TO THE QUARTERFINALS OF THE LIBERTADORES DA AMÉRICA!
10:50 PMa month ago

Varela hit and was cruel, just rolling into the right corner, while Cassio came out to the left! Lucas Piton hit hard in the left corner, Rossi hit the corner, but the ball went into the back of the goal after he touched the ball! 5x5!
10:48 PMa month ago

Romero hit it firmly, in the middle, with no chance of defense for Cássio, who went out to the right! Roni hit hard, in the middle of the goal and equalized again! 4x4!
10:46 PMa month ago

Benedetto rules the archbishop, he rules the LA 12! Róger Guedes sent it into the left corner and tied the score once again. Let's take turns! 3x3!
10:44 PMa month ago

Fernández hit it VERY well and sent it into the right corner, even with Cássio going at it and with no chance of defense! Bruno Melo sent in a left-footed shot, and Rossi sprawled away! 3x2.
10:42 PMa month ago

VILLA HIT IT IN THE MIDDLE AND CASSIO TOOK THE FIRST OF THE CONTEST! But then Raul Gustavo hit it on the right and Rossi caught it. It's still 2-2.
10:40 PMa month ago

Izquierdoz hit it into the left corner, with Cassio coming out to the right, making Boca's second! Cantillo was Timão's and hit the middle, with tranquility, equalizing once again! 2-2!
10:38 PMa month ago

Rojo was the first to strike and sent it into the right corner, displacing Cassio, making Boca's first! Fábio Santos hit it high, on the right, with Rossi hitting it but with no chance! 1x1!
10:31 PMa month ago

Without goals once again, Boca and Corinthians tie in normal time and will define the spot in the penalty shootout!
10:31 PMa month ago

Romero hit the ball from outside the box and sent it dangerously over the goal!
10:26 PMa month ago

We will have five more minutes of extra time in the match.
10:16 PMa month ago

Zeballos took the corner and Izquierdoz headed it over the goal. Du Queiroz, Giuliano, and Rafael Ramos left Corinthians for Roni, Bruno Melo, and Bruno Méndez.
9:55 PMa month ago

Benedetto received the ball in front, alone, on the left, and tried to pass it to Cassio, but he also sent it over the goal! And then Gil was yellow-carded for complaining.
9:45 PMa month ago

Yellow for Varela, for fouling Mantuan, stopping a counter-attack.
9:40 PMa month ago

Benedetto makes his first touch on the ball, and the second half kicks off!
9:39 PMa month ago

The Boca and Corinthians teams return to the pitch to start the second half. Both teams return without changes at halftime.

Without a goal and with Benedetto missing a penalty kick, repeating the script of the first leg when Guedes missed a penalty kick, Boca and Corinthians go to the break tied and taking the match to penalties!
9:20 PMa month ago

João Victor, with an ankle injury, left the field to be replaced by Gil. And we will have four more minutes of extra time.
9:04 PMa month ago

Benedetto hit the left corner, displacing Cassio, but stamped the post and missed the maximum penalty!
9:00 PMa month ago

Raul Gustavo went up high with Zeballos and elbowed the Boca striker. The referee went to the VAR to review the throw and gave the maximum penalty, as well as a yellow card for the Corinthians defender!
8:54 PMa month ago

Óscar Romero raised in the area and Izquierdoz headed, but sent it into the hands of Cassio.
8:51 PMa month ago

Zeballos won the race on the right, crossed the area and Benedetto, alone in the area, shot and sent it away from the goal!
8:45 PMa month ago

Advíncula was the one who tried the shot from outside the area this time, but it fell into the hands of Cassio.
8:43 PMa month ago

Fabra hit it from outside the area and sent it over the goal.
8:38 PMa month ago

Villa received inside the area, charged and hit hard, even without angle, and forced Cássio to save Corinthians.
8:31 PMa month ago

Róger Guedes makes the first touch on the ball and it's rolling into the first half of the match!
8:26 PMa month ago

The second round of the round of 16 began earlier today with Atlético-MG qualifying by beating Emelec 1-0. At the same time of this match we have Libertad vs Athletico-PR.
7:54 PMa month ago

The players take to the field to begin their warm-up exercises.
7:51 PMa month ago

Boca Juniors is lined-up and will field:

Corinthians is lined-up and will field: 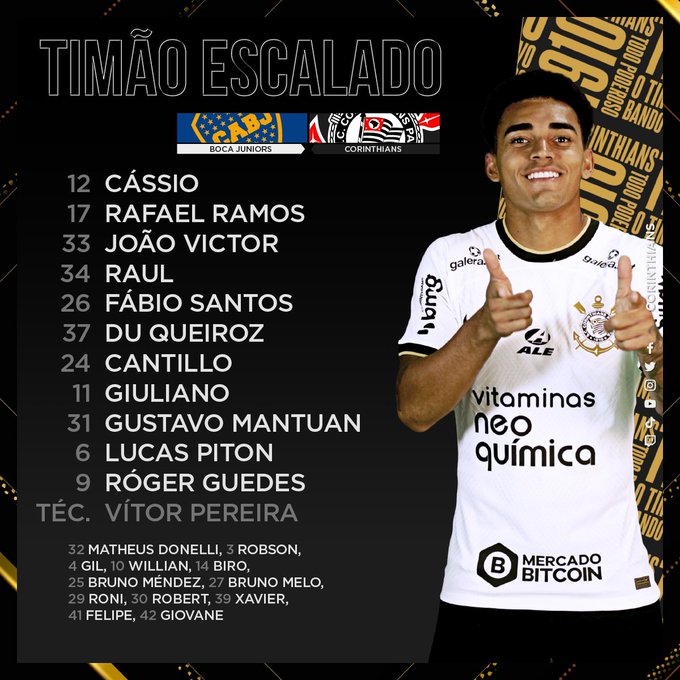 Now begins the broadcast of the decisive match between Boca Juniors and Corinthians, worth a place in the quarterfinals of the Libertadores Cup. Whoever wins will qualify, and a tie will be settled in the penalty shootout!

Do not miss a detail of the match with the live updates and commentaries of VAVEL. Follow along with us all the details, commentaries, analysis and lineups for this Boca Juniors vs Corinthians match.
7:30 PMa month ago

If you want to watch the game Boca Juniors vs Corinthians live on TV, your options is: none.

What time is Boca Juniors vs Corinthians match for Libertadores?

This is the start time of the game Boca Juniors vs Corinthians of 5th July 2022 in several countries:

Andrés Matonte will referee the match, with Nicolas Taran and Martin Soppi at the flags. Leodan Gonzalez will be in charge of VAR, with the entire refereeing team coming from Uruguay.
7:15 PMa month ago 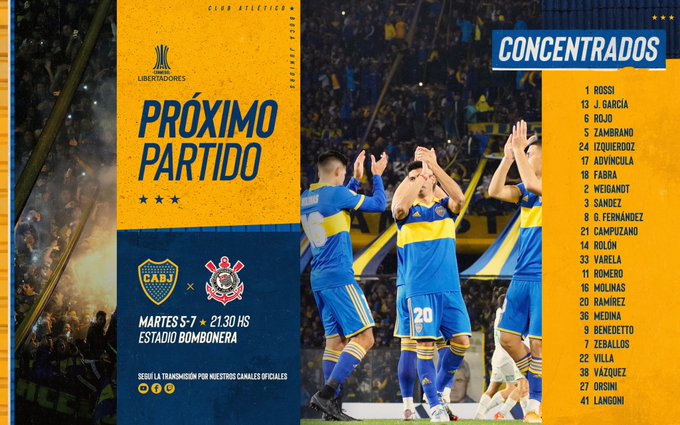 Sebastián Battaglia lives different days from the Corinthians coach. The Xeneize coach has no absences for the match, while Vítor Pereira will not have Maycon, Paulinho, Renato Augusto, Fagner, Adson, Gustavo Silva and Junior Moares, in addition to having Willian as a doubt, and may be out, although related.
7:00 PMa month ago

In group E Boca and Corinthians went through to the next phase. Boca was the leader with 10 points, while Corinthians had nine in second place. Deportivo Cali was third with eight points, while Always Ready scored five points at the bottom of the group.
6:55 PMa month ago

At this start of the second phase of the Argentine Championship, Boca has nine points from six games, one behind the teams with 10 points, which are Racing, Godoy Cruz, Tucuman, Argentinos Juniors and Unión de Santa Fe, while it is one above Rver Plate, Sarmiento and Patronato. Corinthians is in fourth position in the Brasileirão with 26 points, three behind leader Palmeiras and two behind Athletico-PR and Atlético-MG, as well as one ahead of Internacional and two ahead of Fluminense.
6:50 PMa month ago

Meanwhile, Corinthians comes from two draws and one defeat suffered in the last games. The first draw was on Saturday (25), against Santos, with no goals, as well as the one against Boca, shortly after that game. After that Timão visited Fluminense and was easily overcome, taking a 4-0 thrashing, with goals from Manoel, Cano (2) and Fred, in the match that took place last Saturday (2).
6:45 PMa month ago

Boca Juniors comes to the match after two losses and a draw in their last matches. The tie was precisely on Tuesday (28), in the first leg of the round of 16 of the Libertadores, with Corinthians, without a goal. Before that, on Friday (24), Boca received Unión de Santa Fe and was beaten 2-1, with Juárez opening the scoring, Salvio equalizing and Troyanski scoring the winning goal - curiously, all from the penalty spot. And after that, last Friday (01), Boca received an even harder blow, taking a 3-0 lead, with goals from Galoppo and Ramiro Enrique (2).
6:40 PMa month ago