Thank you for listening to this Champions League match. Stay tuned here for the repercussions of this game. Have a good afternoon, and see you next time!

With two goals from the penalty spot, Mbappé and João Mário scored and led the tie in Paris, which closes the gap between PSG and Benfica to the round of 16!

Double substitution in PSG: out came Vitinha and Bernat for the entry of Mukiele and Fabian Ruiz. The next move, a corner kick from the right, Neymar deflected to Mbappé, who arrived with a volley into the back of the goal, but the goal was disallowed for offside.
3:43 PM2 months ago

Yellow for Gilberto, for a push on Mbappé in the attack field.
3:37 PM2 months ago

PSG substitution: Pablo Sarabia is out and Ekitike is in.
3:29 PM2 months ago

Yellow for Enzo Fernandez, for lifting Neymar in the midfield.
3:24 PM2 months ago

Substitution at PSG: out went Bah and in came Gilberto.
3:22 PM2 months ago

João Mário hit the ball high, on the right, with no chance for Donnarumma to get to the ball, going out to the left corner, tying the match!
3:22 PM2 months ago

Verratti tried a cart to steal the ball but only hit Rafa Silva's foot, who was inside the area, who still received a yellow in addition to making the maximum penalty after the VAR review. João Mário on the ball!

Mbappé received on the left, hit a cross and sent it to the left side of the goal, out, missing a great chance to increase the score!
3:09 PM2 months ago

Gonçalo Ramos makes his first touch on the ball, and the match kicks off into the second half!
3:09 PM2 months ago

With a goal from Mbappé, PSG beat Benfica and seal their place in the last 16 of the Champions League!
2:47 PM2 months ago

Neymar found Mbappé in the box, who hit hard, but in the hands of Vlachodimos.
2:41 PM2 months ago

Mbappé hit it firmly, in the right corner, with no chance for Vlachodimos, who came out to the left, opening the score in Paris!
2:40 PM2 months ago

Bernat received the ball on the end line and was brought down while dribbling, getting the maximum penalty! Mbappé on the ball!

Pablo Sarabia hit it hard, low and in the hands of Vlachoduimos in the middle of the goal.
2:30 PM2 months ago

Now the yellow went to Sarabia, for a bicycle attempt, which hit Grimaldo in the face.
2:23 PM2 months ago

Yellow for Otamendi, for bringing down Mbappé on the counter-attack, on the edge of the area. Neymar took the free-kick and hit the barrier.
2:18 PM2 months ago

Rafa Silva risked his shot from inside the area, but it went over the goal.
2:01 PM2 months ago

Mbappé makes the first touch on the ball and it rolls into the first half of the match that counts for a place in the round of 16!
1:58 PM2 months ago

Now the Champions anthem is played before the ball starts to roll!
1:58 PM2 months ago

In the other game...

And with the result of Maccabi Haifa 2-0 Juventus, this game is already worth qualifying for the round of 16 of the Champions League for whoever wins!
1:46 PM2 months ago

And today's bombshell was Mbappé. According to sources inside PSG, the striker is unhappy with how he is being used in the team. In addition, there are rumors that Mbappé wants to leave Paris already in the window of the end of the year.

The players take to the field to begin their warm-up exercises.
1:15 PM2 months ago

Benfica is lined-up and will take the field with: 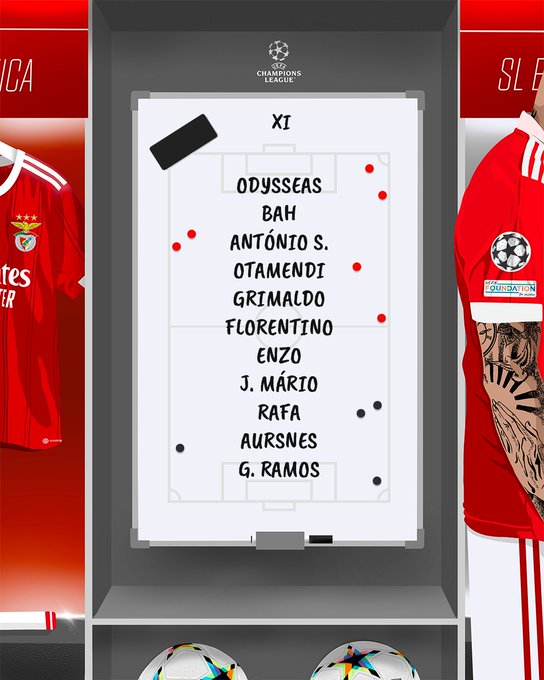 PSG is lined-up and will take the field with: 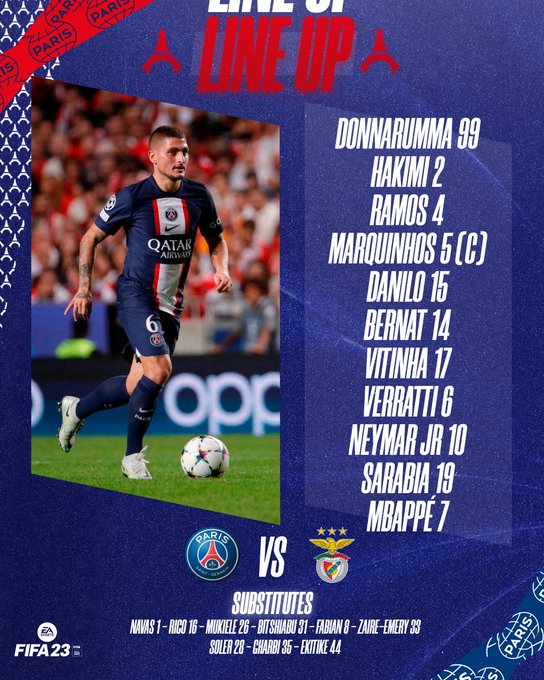 We now begin the broadcast of this decisive Champions League match here on VAVEL!

Do not miss a detail of the match with the live updates and commentaries of VAVEL. Follow along with us all the details, commentaries, analysis and lineups for this PSG x Benfica match.
12:55 PM2 months ago

How to watch PSG vs BenficaLive in TV and Stream

If you want to watch the game PSG vs Benfica live on TV, your options is: none.

If you want to directly stream it: Streaming services and ViX, Paramount+ app.

What time is PSG vs Benfica match for Champions League?

This is the start time of the game PSG vs Benfica of 11th October 2022 in several countries:

Michael Oliver will be the match referee, with assistant referees Stuart Burt and Simon Bennett, and Stuart Attwell in charge of VAR, with the whole team coming from England.
12:40 PM2 months ago

Christophe Galtier will not be able to use the injured Messi, Nuno Mendes, Renato Sanches and Kimpembe. Roger Schmidt also has problems, missing the injured David Neres, Lucas Veríssimo and Morato.
12:25 PM2 months ago

Roger Schmidt spoke about the difficulty of the match and about Messi being out of the match: "It is very difficult to beat them, but we learned [last week] that we need to have a high level of performance, very good connections between the players and always work together. In terms of tactics and mentality, we have to be at the highest level. The key is also to believe in ourselves. It's a new game with a new story, we have to be ready for maybe a different game. However, it will certainly be against a very strong opponent. Having extra energy for the game because a certain player is injured is the wrong approach. For me, Lionel Messi is still the best player in the world. Of course, PSG's approach may be different if he doesn't play, but they are a world-class team and have other fantastic players. We have to focus on ourselves."
12:20 PM2 months ago

Vitinha spoke about the first match, in Portugal, and about the will to win: "It is complicated to say what we missed in the first half. We shouldn't have let Benfica do things. I hope to have the same Benfica tomorrow. We want to win. Benfica has a good collective with a good dynamic. They have a DNA with high pressure. We are ready."
12:15 PM2 months ago

PSG leads group H, tied with Benfica, where both have seven points. Juventus have three points, in third position, while Maccabi Haifa have no points in the competition. In Ligue 1 PSG leads the way with 26 points won, one above Lorient, three ahead of Olympique and five ahead of Lens. In the Premier League Benfica leads with 25 points, three above Porto and six above Braga.
12:05 PM2 months ago

Besides the draw with PSG in the Champions League, Benfica comes to this game with a draw and a win. The draw was an away goalless draw with Vitoria on Saturday (01). After that, on Saturday (8), the victory was at home, over Rio Ave, by 4-2, with Fábio Conceição opening the scoring for the visitors, then Gonçalo Ramos, twice, Jhonatan, against, and Musa scored to turn the match, while Gonçalo Rodrigues cashed in the end of the match.
12:00 PM2 months ago

PSG comes from two draws and one win to this game. The victory was over Nice, 2-1, on Saturday (01), with Messi opening the scoring, Labord equalizing and Mbappé scoring the winning goal, at home. After that PSG visited Benfica for the Champions League and drew 1-1 on Wednesday (5), with Messi opening the scoring and Danilo, against, equalizing the match. Finally, last Saturday (8), the draw was 0-0 away from home against Reims.
11:55 AM2 months ago