Valencia and Barcelona put on an enthralling match in front of a full La Mestalla where the hosts were able to snatch a point late in the day with a goal from Santi Mina after Luis Suarez broke the deadlock earlier in the second half.

Frustrating first half for the Catalans

The first half was filled with chances for Barcelona. Coming against a Valencia team that was defensive and tactically solid, they sought out to frustrate Leo Messi and the Catalans. But Barcelona had a lot of missed chances. In the first ten minutes, both Messi and Neymar had shots that went just over the crossbar. Messi had a second opportunity that he wasted

Luis Suarez also had a number of chances in the first half with two of them coming within a minute of each other. In the 34th minute, Suarez recieved a great ball from Neymar and struck it with some venom. But to his despair, he volleyed it right over the bar and the chance was missed. Suarez returned the favor to Neymar but the Uruguayan's cross went just wide of the Brazilians feet.

The beginning of the second half started out the same as the first half did, with Barcelona in possession and Valencia dropping deep. With only Paco Alcácer up top, Voro and his men seemed content with a draw and they held off the Catalans as long as they can. But you can only stop the deadly combo of Barcelona's attack for so long.

In the 59th minute, Messi recieved a ball from Dani Alves and flicked the ball over the Valencia defense to Suarez, who was just onside by the slightest margins, and the Uruguayan was off to the races. He was able to hold off his defender and fired it past the near post to give Barcelona the 1-0 lead. It was a great goal from Suarez to hold off the defender and fire it in from such a tight angle. 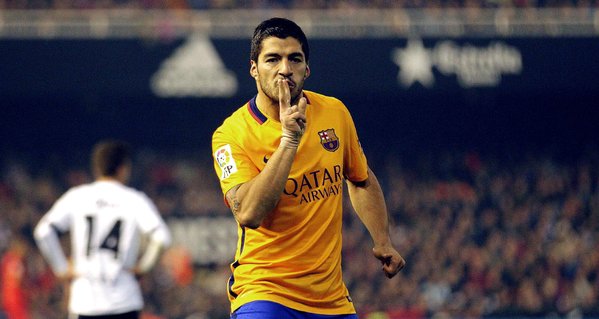 The Suarez goal seemed to wake up Valencia and they instantly went into attack mode and began pressign and forced Barcelona into some mistakes. First it was Sergio Busquets with a poor pass right near his own box and it gave Rodrigo De Paul a great shot on target and he tried to fire it into the far bottom corner but Claudio Bravo saved the day and stopped the attack.

Then in the 85th minute, a counterattack saw Alcacer against both Javier Mascherano and Gerard Pique on a lob through ball. Alacacer held off both of them just outside the box and passed it to Mina who fired it past a helpless Bravo. It was a perfect goal by perfect counterattacking play.

Barcelona had chances to end the game, the two best ones from Leo Messi. First he had his free kick stopped by a great leaping save by Jaume Doménech. Then Danilo had a chance at the other end but Bravo leaped up to grab what would have been a great game winner.

In the dying minutes, Messi executed a great give and go with Neymar but he shot it straight at Jaume and that was the end of the attack and of the match as the referee blew his whistle after the allotted amount of stoppage time had gone by.

This match was a fantastic advertisement for the league, but the real winners are Atletico Madrid and Real Madrid as they gain ground on Barcelona at the top of La Liga.

Valencia keen on bringing in Keita Balde 6 months ago