Russell Westbrook is one of the top few point guards in the NBA and quite possibly the most athletic 6’3” freak the league has ever seen. He’s averaging 28.1 points per 36 minutes and uses his fearless attitude on defense to pickpocket more passes than anyone right now (2.2 steals per game). So, surely it would seem outlandish to even suggest that a spot on the bench would be more beneficial to his team?

Well, at first glance it would seem so. But the Thunder have faced the superstar battle of Westbrook and Kevin Durant for a few seasons now, and Scott Brooks’ game plan of just letting them run the show has left a lot to be desired. Whilst the two superstars have averaged at least 50 points per game between themselves each of the last three seasons, the pressing issue of their clashing playing styles in late game situations can’t be ignored.

While Durant excels at making clutch shots, Westbrook has a tendency to take too many. And in doing so, Thunder fans are left far too often shouting at the television set after Westbrook has hoisted up another long contested three instead of simply standing by to let the reigning MVP take control.

We saw how the Thunder excelled while Russell was out with injury last year, from Durant’s streak of 41 games with 25-plus points, to the team’s 59-23 record and only being ruled out the playoffs in the Conference Finals against the eventual NBA champions. 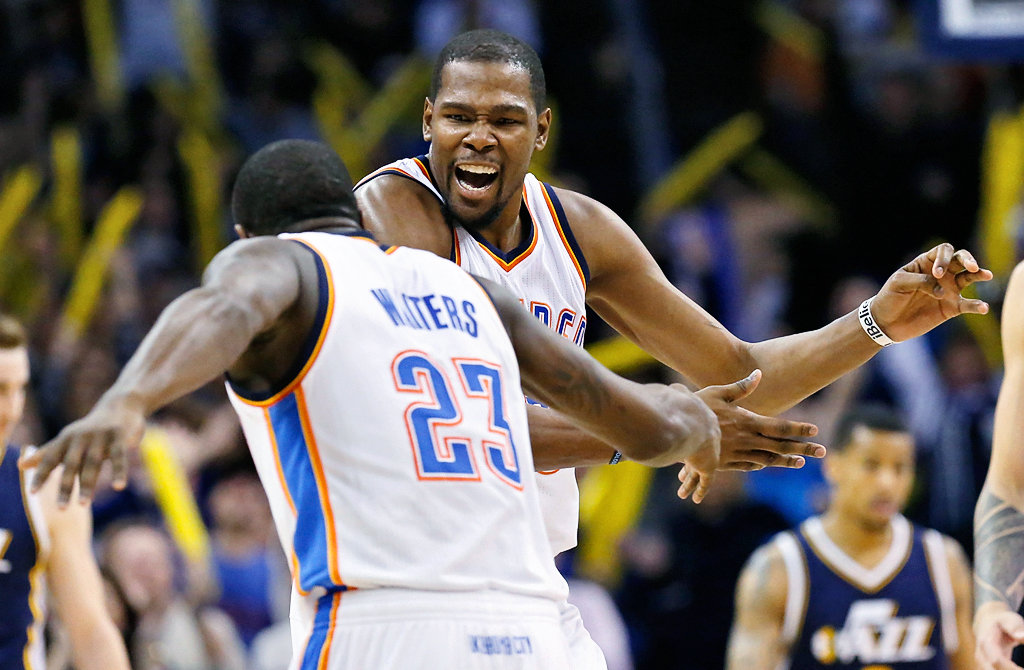 The Thunder are by no means a better team without Westbrook all together, but what they achieved without him shows just how good they can be if they learn to use him correctly.

Unfortunately, Scott Brooks probably won’t ever read this article, and it’s unlikely that he’ll place his All-Star point guard on the bench in exchange for Reggie Jackson anytime soon. However, slightly reducing the time that Durant and Westbrook spend on the court together - primarily in close fourth quarter scenarios - could totally alter the Thunder’s recent inability to close out games. Because let’s face it, they won’t be able to brainwash Russell so he eases off the trigger.

This may be entirely theoretical, but hopefully for the sake of Thunder fans, Scott Brooks and Westbrook will have listened to what LeBron James said earlier this week when talking about the necessary sacrifice needed to win:

Even though LeBron isn’t saying this in an entirely literal sense, and that he needs to start coming off the bench in order for Cleveland to win, it’s most likely something he’d be willing to do. He’s a selfless player who always puts emphasis on how the team comes first.

As driven as Westbrook is to win, this is something that he could take note from. With his 8.3 assists per 36 minutes and being a constant triple-double threat, Russ can certainly do a lot more than just score. Yet, his too frequent trigger-happy nature hasn’t shown any signs of going away. And in order for the Thunder to find the perfect chemistry that will be essential if they ever want to win a title with their two superstars intact, is to unleash Westbrook off the bench.

It's not that Westbrook can't set up his teammates, though, because he can do just that and at a startling rate. As a matter of fact, his assist percentage (the amount of teammate's field goals he assists while on the floor) is 46.3 percent this year. It's not only the best mark of his career, but it's also the highest in the NBA this year. Even though he still has the highest usage percentage (37.9) in the league, which is increased even more due to Durant's toe injury, you can't say Westbrook doesn't pass.

Russell has even increased his overall effectiveness this year with the second best efficiency rating in the league (27.9). These numbers may look like they’re totally disregarding the argument being made, but being that he is top two in both assist percentage and player efficiency has to make Westbrook the best point guard on the planet, right?

Because even though these stats are impressive, they actually disguise the ways in which he hinders his team instead of helping them.

Rather than emphasizing a high level of efficiency they instead indicate Westbrook’s rate of production (per Basketball Reference, player efficiency is production per minute), which, in the case of this executor, as he would like to say, is not the best representation of what he brings to the table at all.

On another dismal and embarrassing night for the 76ers last March, Westbrook recorded the second fastest triple double in history. The second fastest since 1955, that is. In a mere 21 minutes of action, he tallied up 13 points, 10 rebounds, and 14 assists.

There's a lot of incredible talent in the NBA right now, but no one else can put up those numbers in such a short amount of time.

When looking at genuine accuracy and efficiency, though, Westbrook isn't exactly on the same elite level anymore. He doesn't even rank in the top 20 for true shooting percentage (overall efficiency judged upon two pointers, threes and free throws). Meanwhile, Durant is ranked 16th of all time in that category.

So, regardless of what feats Westbrook can achieve in one quarter, Durant has to be the one responsible for taking the pivotal shots when the clock is winding down.

Russell’s erratic style of play, tenacious defense and relentless energy will help the Thunder to the playoffs all year long, yet come playoff time the same strengths aren’t always as reliable. One night he could go off for 45 points to steal a win, or equally he could commit six turnovers and miss a 28-foot jumper with two defenders in his face as the clock hits zero. And leave OKC fans facing another long summer wondering “what if?”

By no stretch of the imagination is Westbrook anything less than an All-NBA point guard, he’s one of the most electrifying talents the league has seen in recent years and he deserves all the credit he gets. However, just think how much more effective he could be if he was used in controlled bursts, such as going down to around 25 minutes per game during the playoffs?

The abilities discussed in this article are possessed by no one else in the league. His level of intensity, combined with the pace he plays with on both ends of the floor, makes him the ultimate energy booster to come off the bench. When the Thunder is faced with crunch time situations, this could be their answer.

It would allow Durant to set a controlled pace when necessary, the Thunder’s younger players to have more time to develop, an increased role offensively for Serge Ibaka who needs to be used far more anyway, and most importantly, it lets their best closer take the final shot.

It may be way, way outside the box, but Westbrook coming off the bench in key games could be a genuine answer to how the Thunder can finally close out games.