Coming into Sunday's game, the Mavericks have had the best offensive rating in the league at 117.6 which is 9.3 point better than league average.

Their relative offensive rating (+9.3) is actually the best mark since the 1990 season. Here is the list of the top ten teams by this metric in the last 30 years (out of 848 teams): 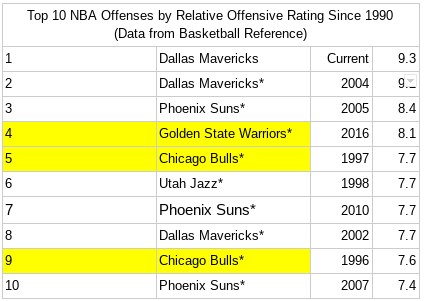 Dallas' matchup with Houston on Sunday was no different as the Mavericks outscored the Rockets 137-123 behind a combined 72 points from Luka Doncic and Tim Hardaway Jr.

"We're not going to get overexcited," Mavericks' coach Rick Carlisle said in a post-game interview. "We know we're capable. We had a complex game plan today that our players stuck with through thick and thin, and that was an important aspect of the game."

James Harden struggled from three during the game as he shot 2-15 from beyond the arc. He was still Houston's leading scorer with 32 points.

James Agrees Contract Extension With Lakers an hour ago

Doncic Excited For Campazzo's Arrival to The League 16 hours ago

Van Gundy Ready For Next Season 17 hours ago

Jackson Re-Signs With Clippers 18 hours ago

Walker to Miss Start of The Season a day ago

Hollis-Jefferson Picked-Up By Minnesota 2 days ago

Schroder Ready to Step Into A Bigger Role 2 days ago