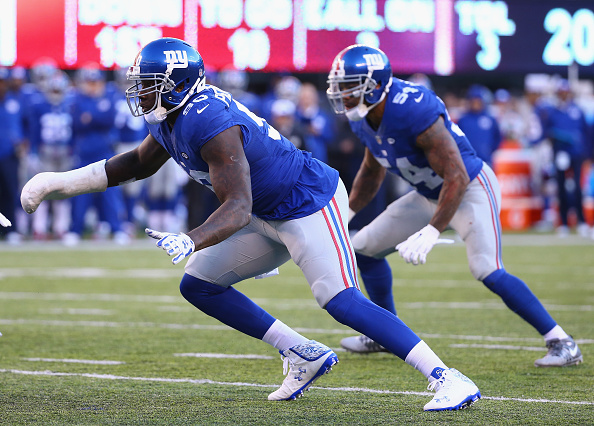 There is no greater mystery right now than that of who will go where in the 2016 draft next month, especially where the New York Giants are concerned.

Ben McAdoo’s promotion marks a new era and a new start for the Giants with the first time head coach already working hard to restructure and rebuild his roster.

The cash has already been splashed by the Giants on defensive end Olivier Vernon, defensive tackle Damon Harrison, cornerback Janoris Jenkins and linebacker Keenan Robinson during the free agency. There has been a well-publicised impetus towards improving the worst defense in the NFL last season.

This, in turn, has piled the pressure on defensive coordinator Steve Spagnuolo who must prove he was worthy of keeping his job when Tom Coughlin was let go as head coach after the Giants failed to make the playoffs for a fourth consecutive year.

Re-signing defensive end Jason Pierre-Paul has set the tone for a roster relying on the presence of a new head coach triggering a rejuvenation from players that seemed to be fading away.

Pierre-Paul has already shown signs of such a boost with a number of videos on social media displaying some of his tireless off-season workouts. He looks a man eager to make amends for a disappointing 2015 season and a man keen to overcome the hand injury that has proven to be a great hindrance. It seems the Giants believe he is capable of a big season.

Despite the optimism surrounding Pierre-Paul and the arrival of Vernon from the Miami Dolphins, knowledge of Spagnuolo’s tendency to rotate pass rushers has led many to believe there is or should be a blue jersey available for another defensive end given the departure of Robert Ayers.

Having said this, it is also too early to count out defensive end Owa Odighizuwa who suffered from an injury plagued rookie season and is yet to prove his worth.
Given how Pierre-Paul, for the time being, has only been re-signed for another year and the fact the draft is designed to provide long term solutions, there is a good chance the Giants will use their number 10 pick to bring in another pass rusher.

Clemson’s Shaq Lawson is an option in this position. He contributed to Clemson’s defense finishing as number one in 2014 and 2015, making an impressive 12.5 of his 20 sacks in his junior season while also making 67 solo tackles and 127 total tackles.

He is one of the quickest defensive ends around at the moment, proving this in the scouting combine where he recorded the fourth fastest time for a defensive end in the 40-yard dash. He offers a powerful frame and has been praised for his leadership on the field and ability to inspire enhanced performances from his team-mates with his energy and aggression.

The ESPN’s Mel Kiper Jr. spoke to the Giants website about Lawson. He said: “The Giants would be wise to add pass-rushing talent, and Lawson is a good fit here. Like JPP, he's also underrated as a complete defensive end in that he's good against the run.”

There is a similar lack of depth in the cornerback position that could be addressed. The Giants look content with Janoris Jenkins on the outside in addition to Dominic Rodgers-Cromartie who, like Pierre-Paul, will be desperate to rediscover top form.

Florida’s Vernon Hargreaves emerges as a possible first round pick for the Giants to consider. He recorded the fourth highest vertical jump and the third highest broad jump in the combine. He offers an explosiveness and spring that makes him capable of matching the top NFL receivers and has been tipped as a good option by Bucky Brooks from NFL Media.

He said: “Grabbing a polished cover corner to play the nickel position alongside Janoris Jenkins and Dominique Rodgers-Cromartie would help the Giants match up with the explosive aerial attacks of their NFC East rivals.”

Likewise, veteran Jerraud Powers poses as a free agent cornerback that would allow General Manager Jerry Reese and McAdoo himself to turn their attention elsewhere in the first round of the draft. He would offer some relief for Trevin Wade who struggled at times in the slot in 2015 while he is also capable of filling in on the outside for Jenkins and Rodgers-Cromartie.

Powers would come with a risk though. The Giants would be left to discover and combat the reasons as to why he performed poorly with the Cardinals last season. Nevertheless, a new coach and a new start could do him the world of good. The value of his experience would perhaps boost his confidence once again.

There is a strong chance of the Giants strengthening their defensive line further by using the number 10 pick to add another pass rusher. Their dreadful defensive record last season has prompted an overwhelming insistence on ensuring there is not a repeat in 2016.

The free agents already brought in will have, to some extent, put McAdoo’s mind at rest heading into the draft, which is why he will undoubtedly have also thought about turning his attention to a cornerback or even a linebacker.

Los Angeles Rams at Green Bay Packers: Divisional Round Preview a month ago
//