Kam Chancellor is bidding farewell to the NFL and the Seattle Seahawks organization.

The four-time Pro Bowler announced his retirement from the sport Sunday in a lengthy statement posted on Twitter: 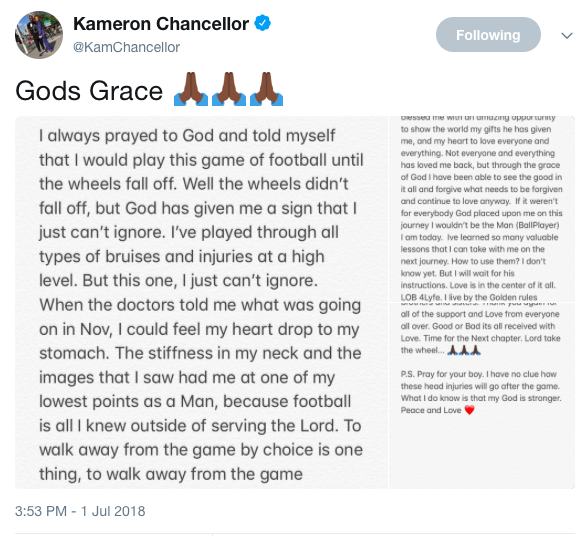 Chancellor, 30, spent his entire eight-year career with the Seattle Seahawks. He missed seven games in 2017 because of injury.

Along with Richard Serman, Earl Thomas, Byron Maxwell and Bobby Wagner, Chancellor and company created one of the most fierce, opposing defenses in NFL history.

The so called "Legion of Boom" were a main factor in winning the division four of Chancellor's eight years in the league, with two Wild Card Berths.

It cumulated in with the Seahawks winning Super Bowl XLVIII in 2013.

He would win NFC Defensive Player of the Week honors twice in 2014 while winning the award once in 2016.

Chancellor was considered to be a life-long Seahawk when he signed a three-year, $36 million contract back in 2017.

He will always be remember for playing the game with so much passion and be always be a member of the terrific 2010 John Schneider draft class that turned the franchise around.