The Los Angeles Rams (7-5) were able to recover from their humiliating 45-6 loss by handing the Arizona Cardinals (3-8-1) an embarrassing 34-7 loss Sunday afternoon in Glendale. In the process, the Rams remain in the hunt for a playoff berth.

The Cardinals played their worst half of football this season. They finished the first half with 63 yards in 20 plays, which led to no points and just three first downs. The problems didn’t just steam on the offense, as the Cardinal defense allowed 390 yards in the first half and 20 points.

Arizona had two weeks to prepare for Los Angeles as they were coming out of their bye week. Instead, they looked rusty and unprepared to take on a Rams team that looked like they were spiraling.

Los Angeles finished with 549 yards while Arizona finished the game with just 198 yards.

It was all Los Angeles

Cooper Kupp recorded six catches on the day for 65 yards and a score. Todd Gurley appeared to get back on track this week, rushing for 95 yards and a touchdown. Malcom Brown got involved in the contest as well, rushing for 30 yards on six carries. 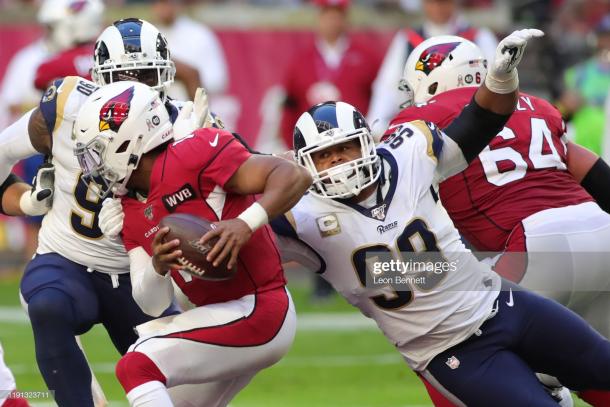 The Cardinals posted their worst offensive output this season, accumulating 198 yards on 61 plays.

Kyler Murray had his worst game as a pro, completing 19 of 34 passes for 163 yards for a 56.4 passer rating. Murray found success rushing the football, as he rushed for 28 yards and a score. Murray also threw his fifth interception of the season, that would result in Taylor Rapp’s first career interception and a defensive touchdown for the Rams.

Kenyan Drake did not separate himself as the starting running back in the contest as he rushed for just 31 yards. David Johnson showed some signs of running like football like his old self but was limited to 28 yards on four carries.

On the defensive side of the ball, the Cardinals allowed receivers and tight ends to run free and there was nothing they could do to stop it. The Cardinals have the worst pass defense in the league, and it showed. The Cardinals were unable to get to the quarterback as they only had one sack. Edge rushers Chandler Jonesand Terrell Suggs were not factoring in the game.

The Rams will take on the Seattle Seahawks next Sunday with major playoff implications on the line while the Cardinals will host a Pittsburgh Steelers team that is trying to keep their playoff hopes alive on Sunday.