Thank you friends of VAVEL

Thank you very much VAVEL friends for joining us in the first Thanksgiving Game.

We continue with the second game this afternoon between the Raiders and Cowboys.

FINAL: The Chicago Bears win to kick off #Thanksgiving 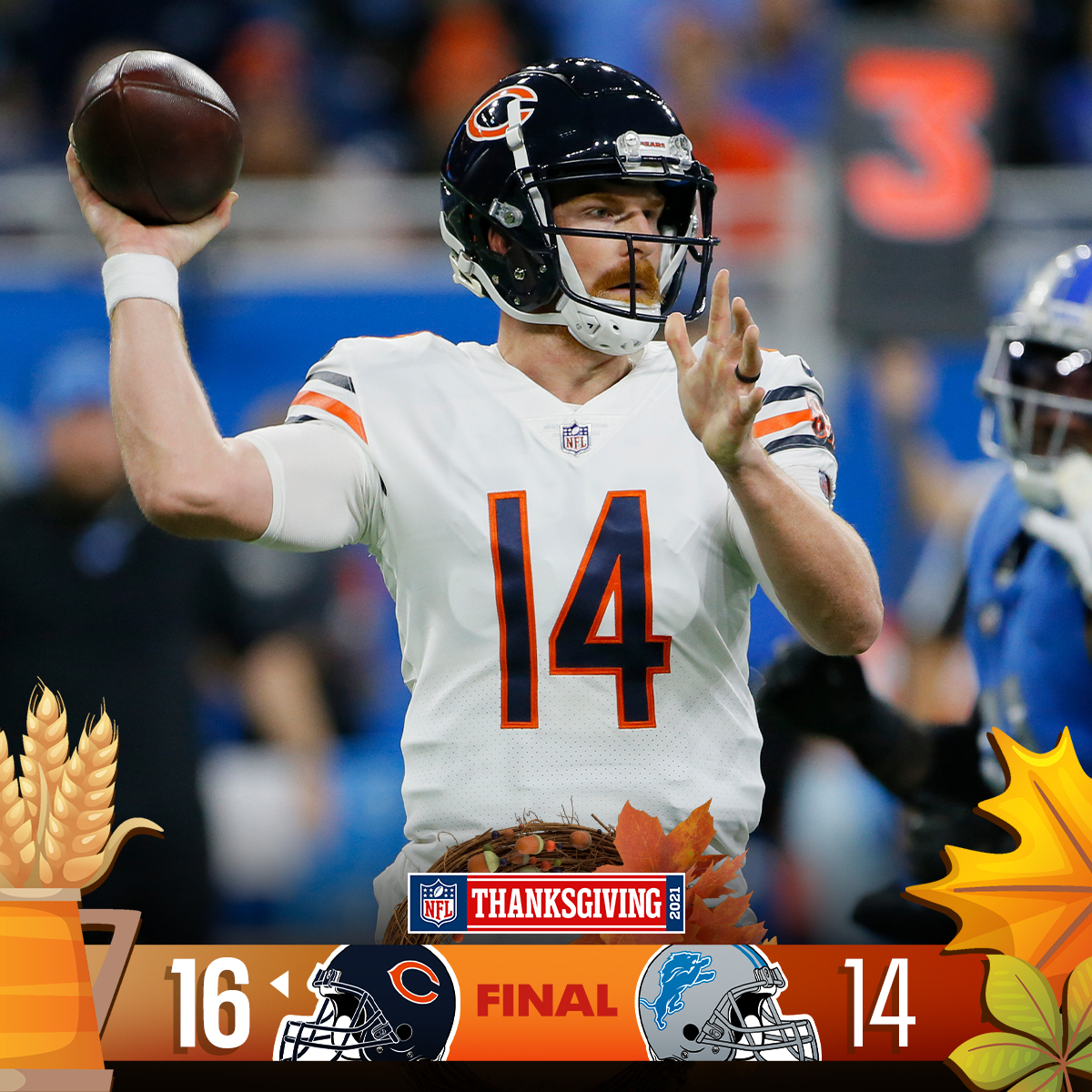 C. Santos 28 yards field goal is GOOD and that's how the game ends.

A. Dalton pass short right to D. Montgomery pushed ob at 50 for 12 yards.

PENALTY on DET, Offensive Too Many Men on Field, 5 yards, enforced at CHI 15 - No Play.

Scoreboard at halftime in Detroit: 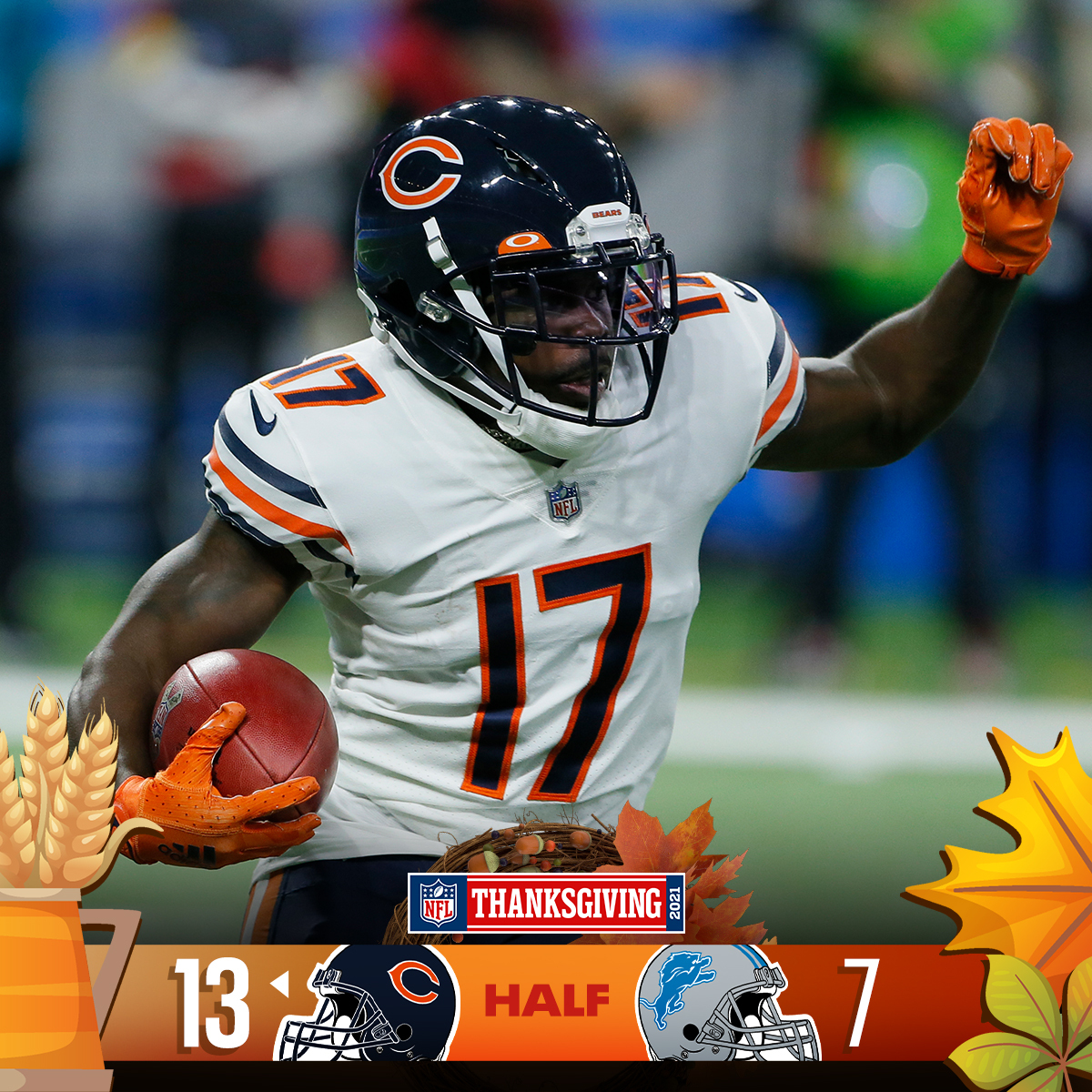 A. Dalton pass deep middle intended for D. Byrd INTERCEPTED by A. Oruwariye at end zone. Touchback.
12:21 PMa year ago

Chicago challenged the runner was down by contact ruling, and the play was REVERSED.

A. Dalton pass short left to D. Montgomery to CHI 23 for 7 yards.

J. Williams left end to DET 2 for no gain.

Goff serves up a DIME to his old friend Josh Reynolds!

FUMBLES, ball out of bounds at DET 41.

All Set at Ford Field

Ladies and gentlemen, the beautiful preliminary ceremony has ended and the first game of this triple card is about to begin.

Kicking off Thanksgiving with an NFC North serving.

The Bears will start with Andy Dalton at the controls

The Chicago Bears will kick off the game with 11-year veteran quarterback Andy Dalton after rookie Justin Fields injured his ribs last week. The three-time Pro Bowler was injured earlier in the year, leaving the lineup with a knee injury after starting the first two games of the season.
9:06 AMa year ago

The Lions are hopeful Jared Goff will return to center after missing a game with an oblique injury. Goff comes across as questionable after being limited in workouts all week.

Despite how bad Goff looks, backup Tim Boyle was even worse against the Browns. He was 15 of 23 for 77 yards with two interceptions in his first NFL start.

The Bears are already on the pitch at Ford Field:

The Chicago team makes their appearance at Ford Field:

The Detroit team heads for their first victory of the season at the Thanksgiving Game: 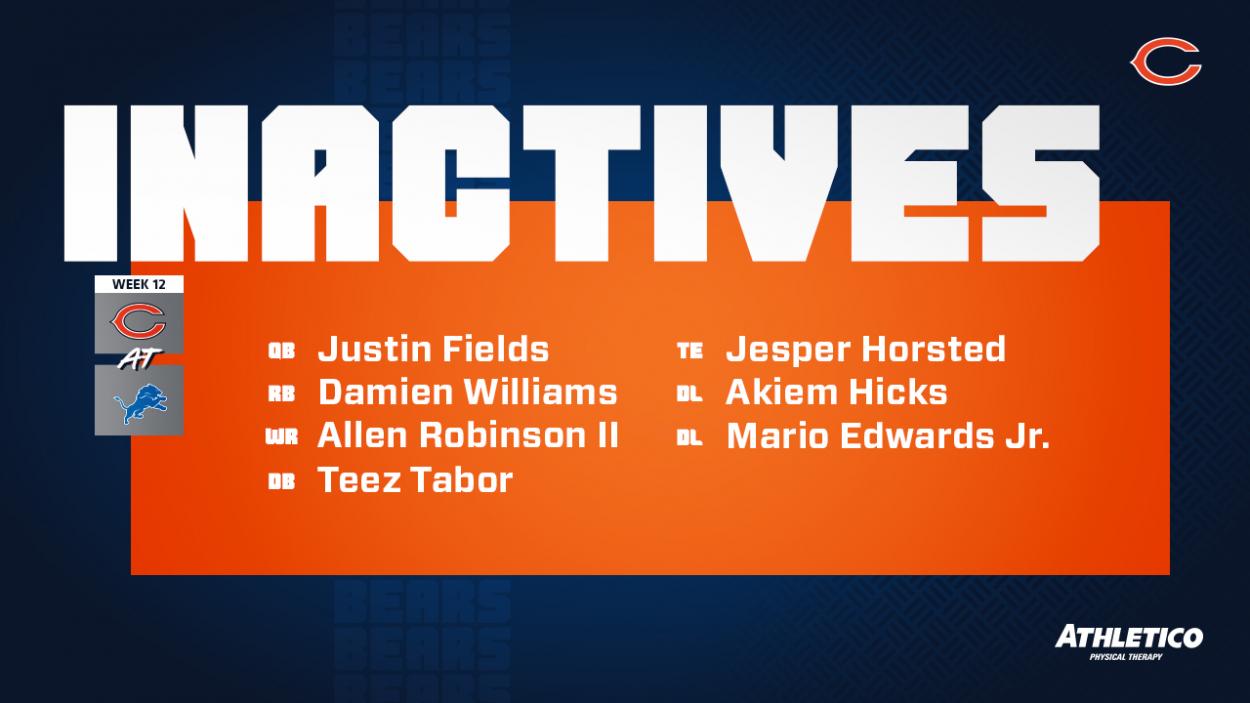 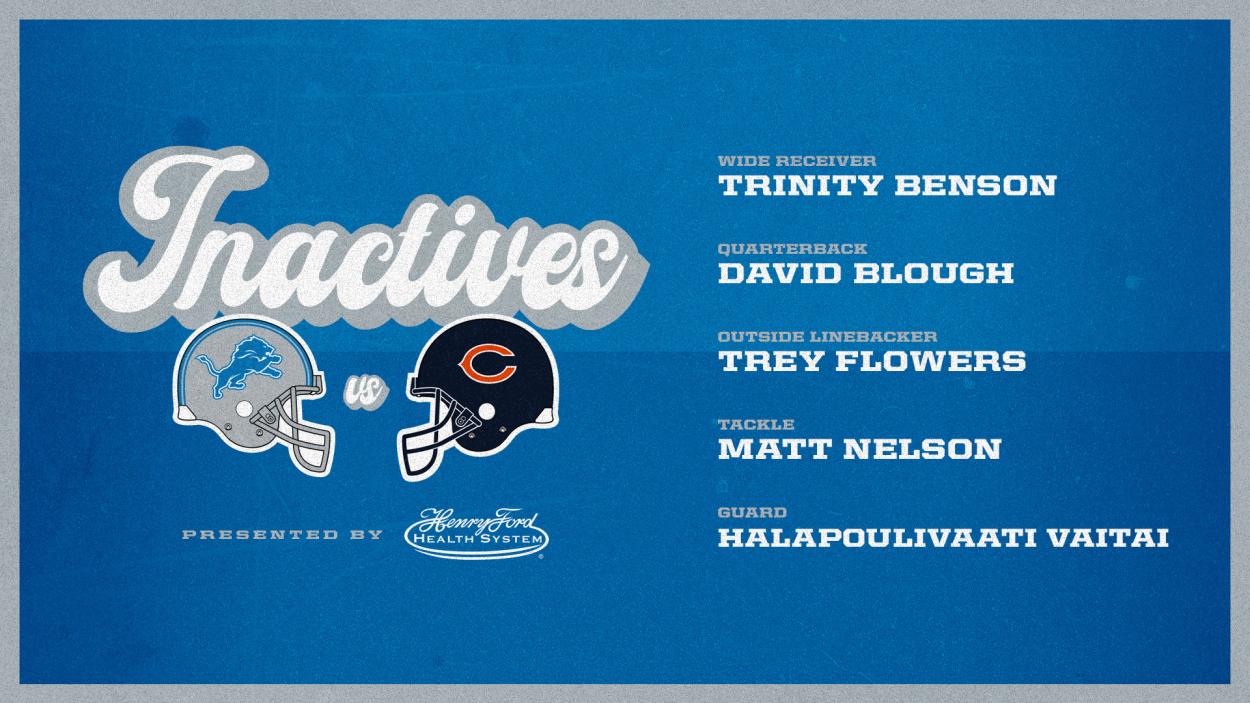 It's almost time for Thursday Night Football. Who will win at the start of Week 12? 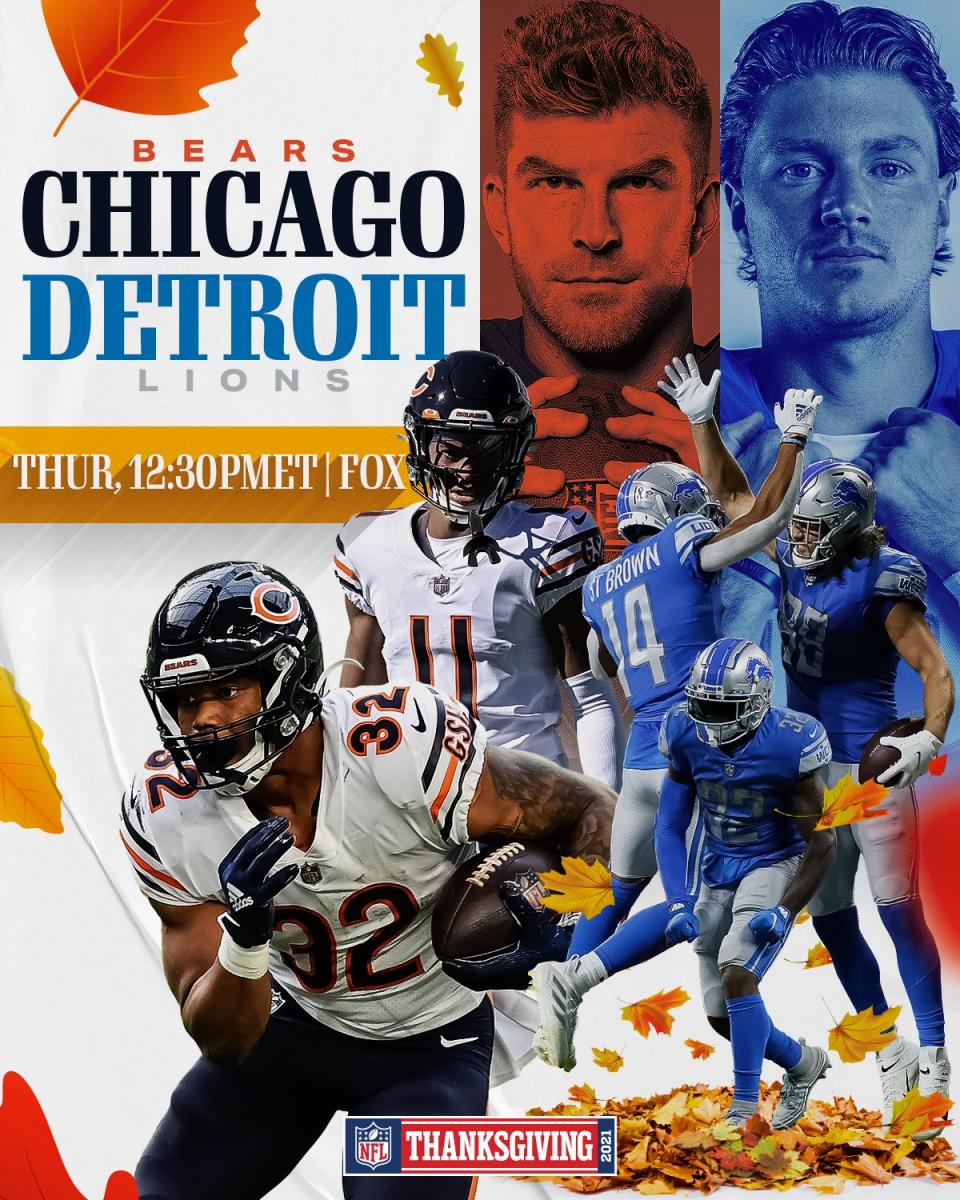 The Chicago Bears have lost five games in a row and could also lose their coach this week.

Less than 48 hours before kickoff at Ford Field, Matt Nagy received many questions at a press conference about a report that he was told he will no longer coach the Bears after Thursday's game.

If Chicago only played Detroit, Nagy would have as much stability as any coach in sports. He is 6-1 against the lowly Lions and one game under .500 against the rest of the NFL.

The winless Detroit Lions will start the NFL game schedule on Thanksgiving as usual and they have a lot of trouble of their own for a change.

Detroit has been close to winning lately, but has still fallen short. They lost by three points last Sunday at Cleveland after a 16-point tie the week before at Pittsburgh.

First-year head coach Dan Campbell desperately hopes the Lions will clinch a victory with all eyes on the holidays and planning for the following season.

We begin with the first game of this triple card, kicking off NFL Week 12.

How to watch Chicago Bears vs Detroit Lions on TV and Online?

If you want to watch the game Chicago Bears vs Detroit Lions live on TV, your options are: FOX and Fox Deportes.

If you want to directly stream it: FOX SPORTS App and NFL Game Pass.

What time is Chicago Bears vs Detroit Lions match for NFL?

This is the start time of the Thanksgiving game Chicago Bears vs Detroit Lions on November 25th, 2021 in several countries:

The last meeting between the two teams was on October 3 of this year, a game that the Chicago Bears won 24-14 at Soldier Field.

The Chicago Bears are not playing well right now and have had a very uneven season, losing their last five games. They will try to end their losing streak by beating the Lions in the Thanksgiving Day game for just their second road win of the season.

QB Andy Dalton completed 11 of 23 passes for 201 yards and two touchdowns in the loss to the Baltimore Ravens. He is expected to start as a starter as Justin Fields is injured. David Montgomery had 14 carries for 58 yards, while Darnell Mooney had five receptions for 121 receiving yards and a touchdown.

Detroit Lions go for their first win of the NFL Season

The Detroit Lions are a mess after they've had a lot of trouble this season and haven't won a game yet. They will try to end their lousy winless streak by beating the Bears tonight for their first win of the year.

Tim Boyle completed 15 of 23 passes for 77 yards and had two interceptions in the loss to the Cleveland Browns. With Jared Goff still listed as questionable for this game, Boyle will likely start if Goff can't play on Thanksgiving. D'Andre Swift had 14 carries for 136 yards and a touchdown, while T.J. Hockenson had six receptions for 51 yards.

Why do the Lions play on Thanksgiving?

It all started when the Lions franchise was just five years old after being founded in 1929 in Portsmouth, Ohio, under the name Spartans. Portsmouth was a very small town that did not have the infrastructure to support a professional team in the nascent NFL. So George A. Richards, owner of the Detroit radio station, bought the Spartans and moved them to town from him in 1934.

They were a solid team that was playing well and promised interesting things, but with a secondary role in the city as it was the Major League Baseball team, Hank Greenberg's Tigers, who had the most support from the inhabitants and more after have achieved the American League Championship in that year. So during that season, the Lions, because of their low popularity, only aspired to take away at most 15,000 fans if they played on the same day. It was then that, desperate to get Detroit excited about its fledgling NFL franchise, Richards had the idea of ​​playing a game on Thanksgiving.

Since Richards' WJR was one of the largest radio stations in the country, he had great influence on its network and convinced NBC to broadcast the game on 94 stations across the country.

The result was all a success. The undefeated Chicago Bears came in as defending champions, and since the Lions only had one loss, the winner of the first Thanksgiving game would take the NFL West Division.

On November 29, 1934, the University of Detroit Stadium registered a spectacular house in its 26,000 seats and many fans without a ticket were left out of the stadium. The result was a 19-16 Chicago Bears win, and since then the tradition of the Lions always playing a game, on a day as important as Thanksgiving, has continued to this day.

The match will be played at Ford Field

Ford Field is an American football stadium in the city of Detroit, Michigan, home to the Detroit Lions of the NFL. It was inaugurated on August 24, 2002 and has a capacity for 65,000 people.

It hosted Super Bowl XL played in 2006 between the Pittsburgh Steelers and the Seattle Seahawks. It also hosted the Wrestlemania 23 wrestling on April 1, 2007 and the NCAA Basketball Final Four on April 6, 2009.

The stadium has a closed roof, allowing it to be used every day of the year regardless of the weather. The roof side panels are translucent, so less artificial lighting is required during the day than in a traditional indoor stadium. In 2017, Ford Field underwent its first major renovation. 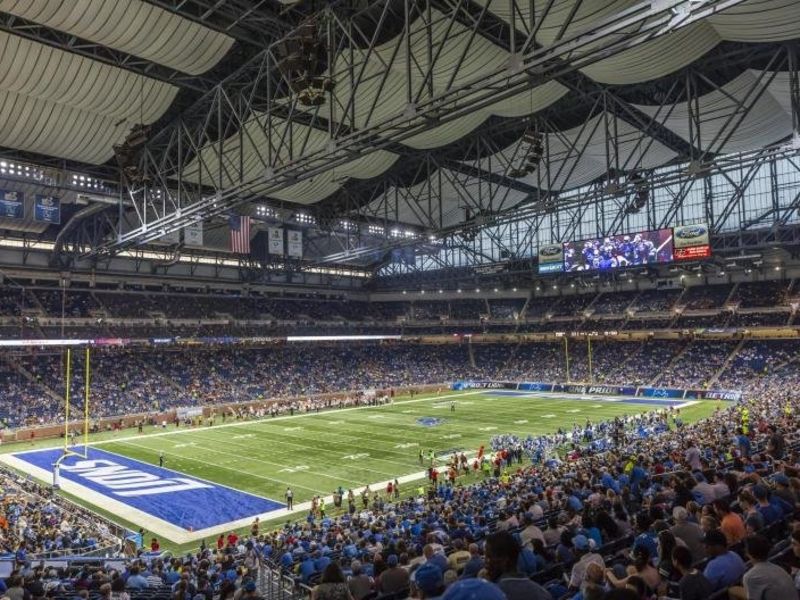 My name is Alex CR and I’ll be your host for this game: Chicago Bears vs Detroit Lions. We will provide you with pre-game analysis, score updates, and news as it happens live here on VAVEL.