6:00 PMa year ago
We thank you for joining VAVEL for this match. Until next time!
5:59 PMa year ago

Real Madrid took full advantage of their chances in the second half to secure themselves an important win. The Merengues continue in the title race, just two points behind Barcelona.
5:56 PMa year ago

Kroos with a header that's just wide from the target!
5:55 PMa year ago

Benzema's goal was so easy on the eye. Sensational! #RealMadridValencia pic.twitter.com/xxhZiFyNld

Four minutes of added time for the match.
5:53 PMa year ago

Kang-In Lee gets sent off after a foul on Sergio Ramos.
5:52 PMa year ago

Asensio gives the ball the Benzema who then flicks it over his defender on the first touch and finishes it with a volley to the top left corner.

The goal from Asensio to make it 2-0

Kroos takes a free kick, but Cillessen does well to save.
5:48 PMa year ago

Vinicius had a scoring chance on his first play of the game, but instead of going for goal, he tries to assist Asensio.

He does so wrongfully and a big chance is wasted.

Vinicius replaces Eden Hazard for the final stretch of the game.
5:41 PMa year ago

The game resumes after the cooling break.
5:41 PMa year ago

The game stops again for another cooling break.
5:39 PMa year ago

On his first touch of the ball, Asensio makes a perfect volley shot to beat Cillessen.
5:37 PMa year ago

Asensio comes on instead of Valverde.
5:36 PMa year ago

Mangala makes a speedy run to stop Hazard from going one on one against Cillessen.
5:34 PMa year ago

Soler and Parejo leave their place on the pitch for Cheryshev and Coquelin.
5:30 PMa year ago

Cillessen makes a diving save to a shot from Modric.
5:27 PMa year ago

Benzema has a one on one with Cillessen and he doesn't miss his chance!

Real Madrid are in front!

Ferran and Maxi Gómez are replaced by Guedes and Gameiro.
5:22 PMa year ago

Valverde shoots from long distance, but Cillessen keeps up his great work and makes a good save.
5:20 PMa year ago

Real Madrid has taken the initiative of the game, but struggle to get past Valencia's two lines of four.
5:16 PMa year ago

Hazard gets to the end line and tries to cut the ball back to one of his teammates, but no Real Madrid player gets there to tap it in.
5:14 PMa year ago

The second half begins with very timid attacks from both sides.

No real danger during the first five minutes.

We're underway with the last 45 minutes of the match between Real Madrid and Valencia.
4:52 PMa year ago

A very hard-fought first half ends with the score equalized. Valencia seemed to have gotten the opener, but VAR ruled it offside.
4:49 PMa year ago

Hazard receives the ball on the edge of the box and tries a low-driven shot.

Cillessen makes yet another save!

Ferran Torres had a good scoring chance, but Carvajal makes a sliding challenge to stop him.
4:47 PMa year ago

Casemiro with a header in a set-pieces play, but Cillessen makes another save.
4:45 PMa year ago

Kondogbia takes a left-footed strike that forces a diving save from Courtois.
4:41 PMa year ago

Carvajal finds Benzema with a good cross, but the Frenchman makes a very bad header that was neither a pass nor an attempt on goal.
4:37 PMa year ago

The game is resumed after the players have re-hydrated.
4:35 PMa year ago

The game is stopped for a cooling break.
4:34 PMa year ago

Great cross from Carvajal looking for Benzema, but Guillamón makes a great clearance.
4:31 PMa year ago

Carvajal dribbles and gets inside the 6-yard box. He looks for the far post with a low-driven shot.

Cillessen makes a miracle save using his right leg!

Gómez was a few inches offside when he flicked on the ball and the goal won't count!
4:23 PMa year ago

Soler places the ball inside the box.

Gómez flicks it on so Rodrigo could come in from behind and finish it!

Hazard shoots once more, but Cillessen again makes an easy save thanks to his good positioning.
4:16 PMa year ago

Rodrigo Moreno has a one-on-one with Courtois. He shoots and hits the far post!
4:14 PMa year ago

Another powerful shot from Kroos stopped by Cillesen.
4:13 PMa year ago

Again Cillessen with an amazing save in a one-on-one situation against Hazard.
4:12 PMa year ago

Benzema gets into the box from the left and then cuts it back towards Kroos. The German tries a finish to the near post, but Cillessen is correctly placed to make the stop.
4:09 PMa year ago

Courtois punches out an interesting cross before the ball reached Mangala.
4:06 PMa year ago

Casemiro shoots from long distance, but Cillessen makes an easy save.
4:02 PMa year ago

The game is underway at Estadio Alfredo di Stefano!
4:00 PMa year ago
Both teams step onto the pitch and we're seconds away from the start of the match.

Real Madrid will be wearing their traditional white kit, while Valencia are in an all-blue uniform. 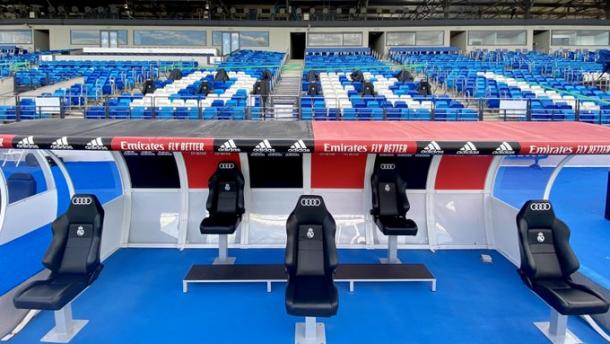 The benches at today's venue have been modified to respect social distancing measures. Subs will be at least 4 feet away from each other while they await the chance to play.

The teams have just finished their warmups and we're just 15 minutes away from the start.

Carvajal starts after all

After some confusion with the team sheets provided at the Alfredo Di Stefano, it is confirmed that it's Carvajal who starts while Marcelo will be on the bench.
3:32 PMa year ago
Everything set at the Estadio Alfredo Di Stéfano for the start of the match between Real Madrid and Valencia.

We're half-hour away from kick-off! 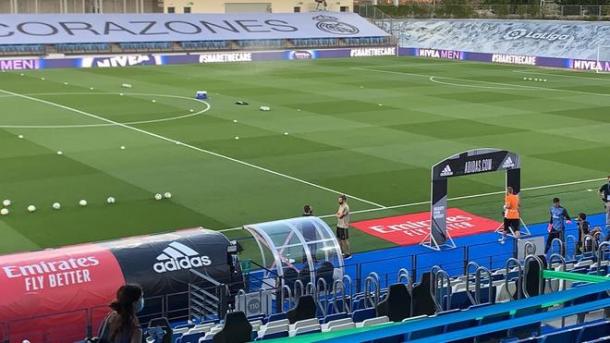 Marcelo will start the match instead of Dani Carvajal.

The Brazilian will most likely play as left-back, forcing Mendy to move to the right.

3:23 PMa year ago
Valencia making their way into Real Madrid's training facilities a few minutes ago.

The Naranjeros will look to go home with the three points and get back into the fight for Europa League places. 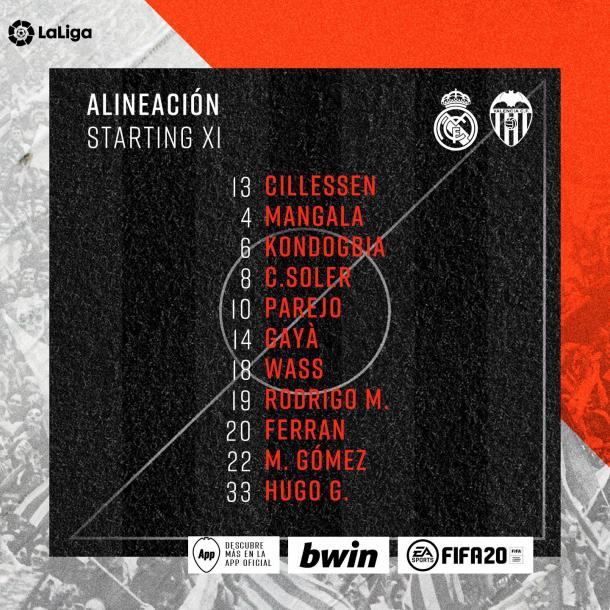 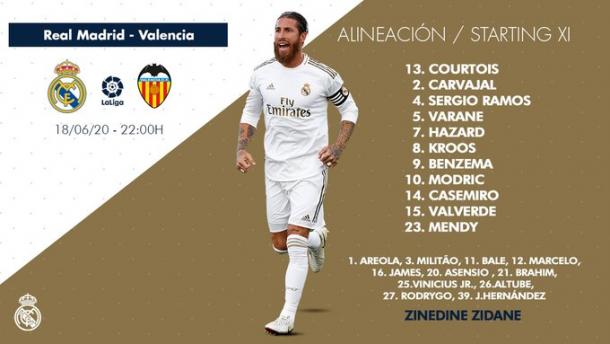 3:08 PMa year ago
The Valencia squad took the necessary sanitary precautions for their trip to Spain's capital.

3:06 PMa year ago
A few images of the Real Madrid players arriving at their facilities in which the Estadio Alfredo Di Stéfano is in.

They look to have positive attitudes as they friendly greet everyone they meet at the door.

We're ready to bring you the best actions from this Real Madrid vs Valencia match.

Don't go anywhere! Kick-off is an hour away and lineups are coming soon.

Do not miss a detail of the match with the live updates and commentaries of VAVEL. Follow along with us all the details, commentaries, analysis and lineups for this Real Madrid vs Valencia CF.
1:29 AMa year ago

He has urged his players to take it one game at the time and to be as prepared as possible for each match, taking into account that they will be playing with only two rest days until the season ends.

1:23 AMa year ago
The Real Madrid coach recognizes both the difficulty of facing a team like Valencia and the importance of winning this match in the title race against Barcelona.

How to watch Real Madrid vs Valencia Live TV and Stream

If you want to watch the game on TV, your options are beInSports and beInSports en Español.

Valencia must win if they want to go to Europe

Valencia occupies eighth place in the league table with 43 points; one behind Villareal and four from Getafe who are seventh and sixth.

For them, a victory in a very difficult field would be ideal as they look to climb positions and get into the fight for Europa League berths.

Real Madrid continues as sub-leader in La Liga after its rival Barcelona secured the first position for yet another week by defeating Leganés 2-0 on Tuesday.

The Merengues will want to do the same against Valencia and not fall behind in the title race.

The Real Madrid vs Valencia match will be played at the Estadio Alfredo di Stefano, in Madrid, Spain. The kick-off is scheduled at 4:00 pm ET / 1:00 pm PT. 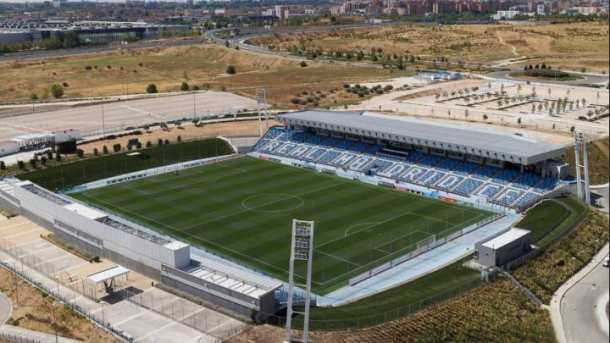 My name Juan Pablo Rodriguez and I’ll be your host for this game. We will provide you with pre-game analysis, roster updates, and news as it happens live here on VAVEL.