Thanks for following this match on VAVEL USA! Until the next time.
12:46 AMa year ago

In the next match of Group A, Mexico will face Guatemala while Trinidad and Tobago will take on El Salvador; both matches will be played next Wednesday.
12:42 AMa year ago

For the second time, the match is paused due to homophobic shouting.
12:34 AMa year ago

The referee adds seven more minutes to the match.
12:29 AMa year ago

The match is paused due to the protocol against homophobic shouting.
12:27 AMa year ago

Phillip makes a great save! Once again, Jesus Corona takes another long-range shot that the Trinidadian goalkeeper deflects for a corner kick.
12:27 AMa year ago

Orbelín! Cross into the are is met by Pineda, but his shot only goes just wide of the right post.

CORONA AGAIN! Tecatito shoots from the edge of the area after a great play by Orbelín Pineda.
12:18 AMa year ago

MARVIN PHILLIP! Excellent reception by Funes Mori who chests the ball down and shoots at goal, but the Trinidadian goalkeeper again prevents Mexico's goal.
12:14 AMa year ago

With twenty minutes left in the match, Mexico continues to dominate, but is unable to score a goal. They play and send crosses into the area.
12:12 AMa year ago

Through social networks, the Mexican National Team gives an update on Hirving Lozano, who is in stable condition.

The match is paused due to a collision between Jones and Corona.
12:08 AMa year ago

Corona's shot bounces off Funes Mori, but he can't control the ball and misses the goal.
12:01 AMa year ago

TyT misses! Molino's cross and the ball is dangerously dribbling in the Mexican area; nobody could close the pincer.
11:55 PMa year ago

Trinidad and Tobago: In Molino, Powder, and Williams; out García, Russell, and Arcia.

Yellow card for Alvin Jones for a tackle on Corona.
11:27 PMa year ago

CHAKA! Rodriguez misses a pass in the area alone, doesn't shoot, waits and the defense takes the ball away from him.
11:26 PMa year ago

Erick Gutierrez is encouraged with a shot that barely goes over the goal.
11:22 PMa year ago

The referee adds seven more minutes to the first half.
11:20 PMa year ago

Jesus Corona's left-footed shot keeps looking for the goal. Mexico very close to scoring the first goal of the match.
11:17 PMa year ago

We have passed the first half hour of the game and although Mexico has had the clearest chances to score, they are still finding the goal.
11:06 PMa year ago

A Trinidad and Tobago player is left lying on the turf after a headbutt with Salcedo.
11:05 PMa year ago

Mexico misses it! Funes Mori and Corona make a one-two. El Tecatito' enters the area and shoots, but Phillips reacts well and saves the goal with his chest.
10:58 PMa year ago

This is the clearest play so far in the match.

Mexico: The forced change is made. Hirving Lozano leaves the field and Efraín Álvarez enters.
10:53 PMa year ago

This was the play in which 'Chucky' Lozano left the game injured and knocked out.

Yellow card for Edson Alvarez for complaining.
10:48 PMa year ago

Hirving Lozano falls in the area and collides with the goalkeeper of Trinidad and Tobago. Medical assistance is called as the number 22 does not get up and has a bloody wound on his left eyebrow.
10:45 PMa year ago

Funes Mori! Rogelio's header in the small area, but Phillip deflects correctly and avoids the first goal of the match.
10:39 PMa year ago

First minutes of the match and the fans are present with the 'ole'.
10:36 PMa year ago

The eleven players from Mexico and Trinidad and Tobago are already on the field at AT&T Stadium to begin the protocol. The Mexican players will wear white uniforms while the Trinidadian players will wear their classic home kit in red and black.
10:29 PMa year ago

Through social networks, CONCACAF sends a message prior to the match to avoid the now famous shouting by the fans.

The players are already on the field at AT&T Stadium doing warm-up exercises.

Mexican fans are already present at AT&T Stadium with flags and shouts of support. Many Mexicans are in the stadium. 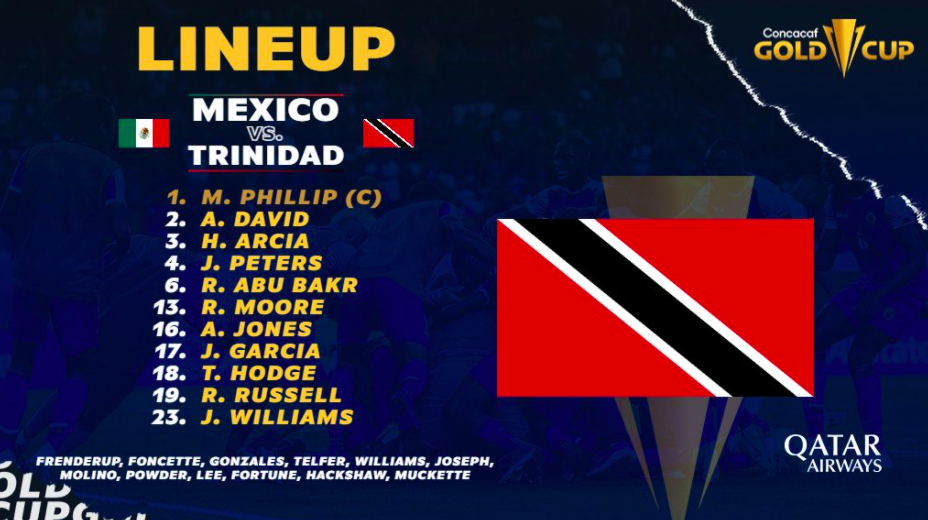 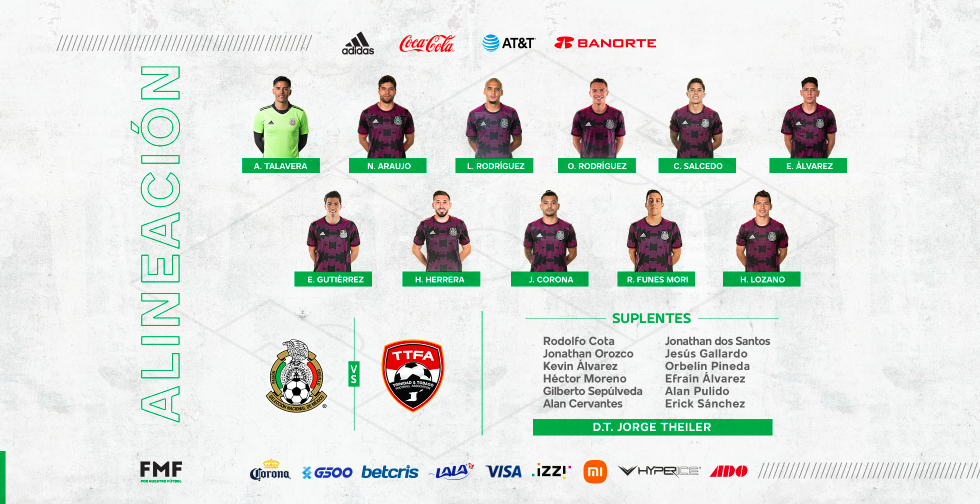 Mexico will wear its alternate white uniform tonight. The captain for this match is Hector Herrera. 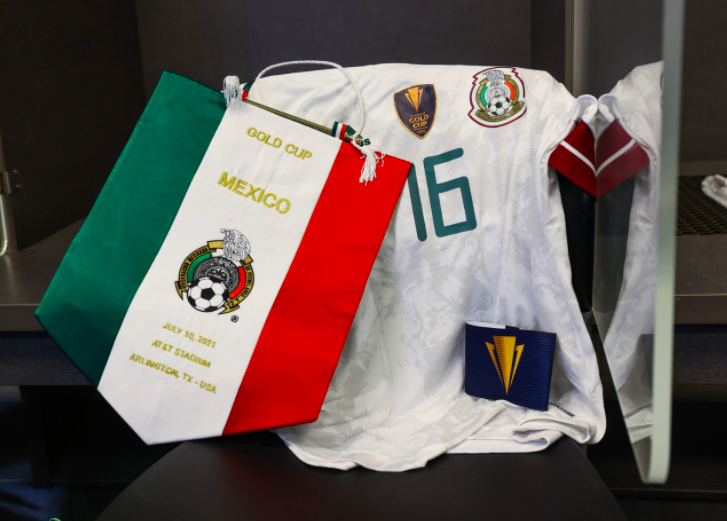 Mexico will seek to defend its title and become two-time Gold Cup champion. The Mexican National Team beat the United States in the final of the 2019 edition. Both the Americans and the Mexicans have five Gold Cup titles.
9:21 PMa year ago

Mexico's players have arrived at AT&T Stadium for tonight's match. 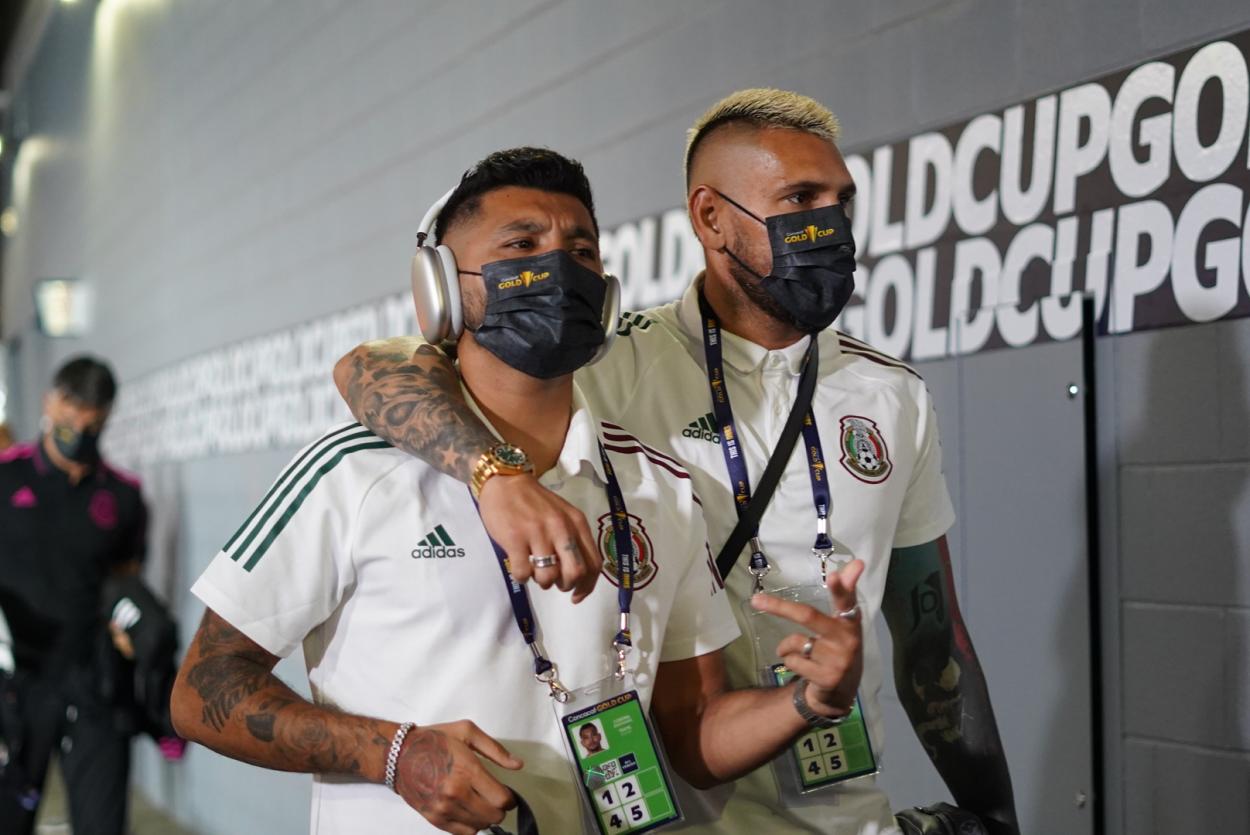 In this Gold Cup, one of the highest expectations in the Mexican squad is related to the performance of naturalized Mexican striker Rogelio Funes Mori, a player who is a key player in his club and who has great possibilities of being the architect of Gerardo Martino's offensive line.
9:12 PMa year ago

Prior to tonight's match, Hector Herrera spoke at a press conference about the Mexican National Team's expectations for this Gold Cup.

"We have always been demanding. We have always had the obligation to win, too. The truth is that we want to win every tournament we play and we are not thinking about what people will say. If we win, nothing happens, and if we lose, criticism comes. There is always criticism and that is the least important thing. The most important thing is to focus on the start of the tournament and go step by step to achieve our objective", commented the Atletico de Madrid player. 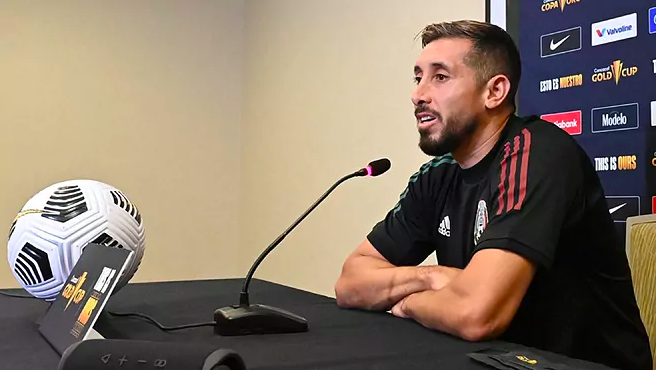 AT&T Stadium will be the venue for this match between Mexico and Trinidad and Tobago. This stadium is located in the city of Arlington, Texas, United States. It is home to the Dallas Cowboys. Prior to the match, it was said that this field was not ready for the Gold Cup. The grass was in poor condition and for that reason CONCACAF decided that neither the Mexican National Team nor Trinidad and Tobago would train at the stadium prior to their first Gold Cup match.

At VAVEL Mexico we are ready to bring you coverage of this first game of the Mexican National Team against Trinidad and Tobago. Both teams are in Group A.
6:35 PMa year ago

Hours away from kick-off

In a few more minutes we will have all the most relevant news from the AT&T Stadium as well as the warm-up, line-ups, dressing rooms and all the news that will emerge for this clash between the Mexican National Team and Trinidad and Tobago.
6:33 PMa year ago

Players such as Guillermo Ochoa, midfielder Luis Romo and forward Henry Martín will be absent for El Tri as they are reinforcements for the Olympic team. Martino will not be able to count on U-23 team players such as defender César Montes and winger Diego Lainez, who have also been called up to El Tri's Tokyo squad.
6:29 PMa year ago

Group A activity begins today with the match between Mexico and Trinidad and Tobago. Tomorrow El Salvador and Guatemala will do the same when they face each other at 10:30 p.m. at the Toyota Stadium located in the city of Texas, USA.
3:44 AMa year ago

Tune in here Mexico vs Trinidad and Tobago Live Score

Don't move from here. In a few moments we will provide you the lineups and all the details that happened on this match. Do not miss a detail of the match Mexico - Trinidad and Tobago live updates and commentaries of VAVEL.
3:39 AMa year ago

How to watch Mexico - Trinidad and Tobago Live Stream on TV and Online?

If you want to watch the game Mexico - Trinidad and Tobago live on TV, your options is: TUDN USA.

CONCACAF has approved replacements for the injured duo of Khaleem Hyland and Judah Garcia. The players who will be part of the Trinidad and Tobago squad for the Gold Cup will be Noah Powder and Mekeil Williams and Angus Eve will have them available for tonight's match against the Mexican national team.
3:29 AMa year ago

The coach of Mexico's National Team held a press conference where he spoke about El Tri's favoritism: "This is an official competition and Mexico is considered the favorite, and it is very difficult to carry on because you know that any result other than winning means a blow to your confidence". Regarding Alan Pulido's injury, Martino commented: "Alan has been progressing well with his injury. Today we will know if he will be able to be with us tomorrow or if it will be the next game," Gerardo Martino concluded. 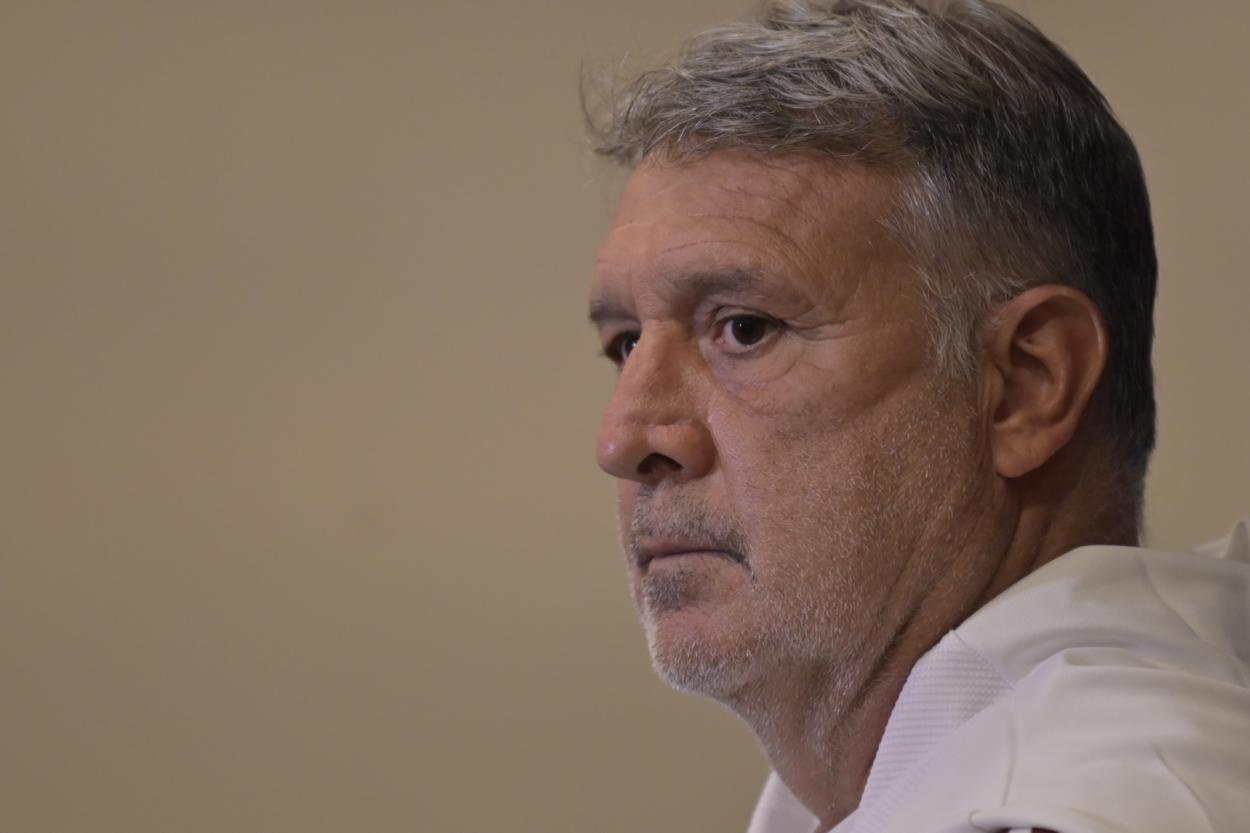 History Mexico vs Trinidad and Tobago

The Mexican national team has played against Trinidad and Tobago in 23 matches, including qualifiers (12), Gold Cup (4), friendlies (3) and the former CONCACAF Championship (4). Mexico leads the record by a wide margin. In total, the Tricolor won 15 games, drew five and was defeated on three occasions. In goal statistics, Mexico has 54 goals for and 22 against. 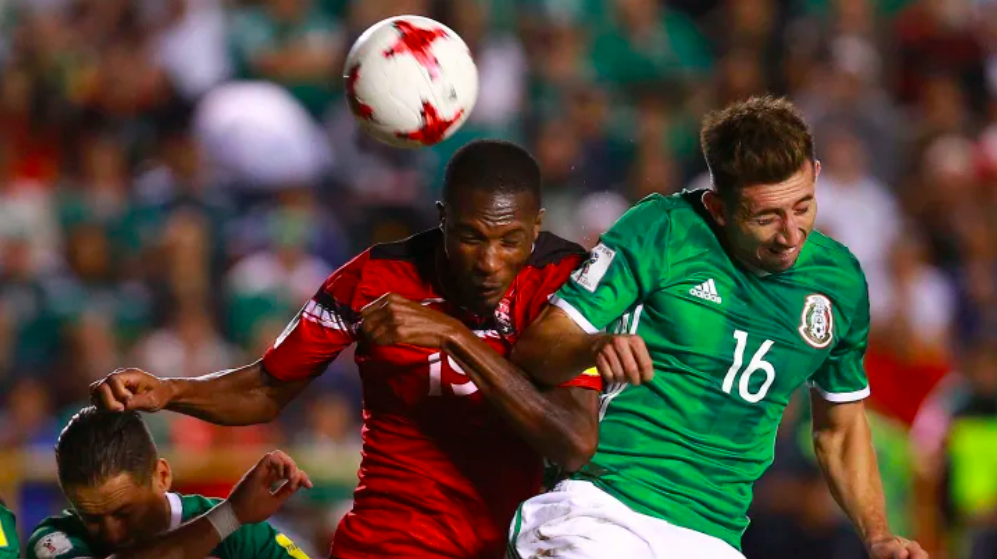 Kevin Molino, forward | The Trinidadian player has already scored two goals in the preliminaries. Kevin has paired well with Reon Moore, who scored twice in the preliminary round win over Montserrat. The striker is fast and has good long distance power. He can be a dangerous factor for Mexico's defense. 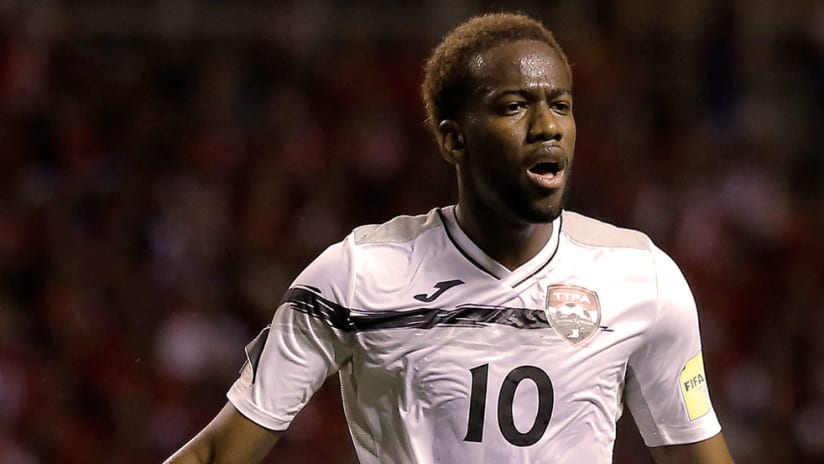 Rogelio Funes Mori, forward | The naturalized Mexican-born Argentinean will be in the spotlight in this Gold Cup as he is a player Gerardo Martino likes. He will have rivals to show off and demonstrate his eye for goal and good play in the offensive line. 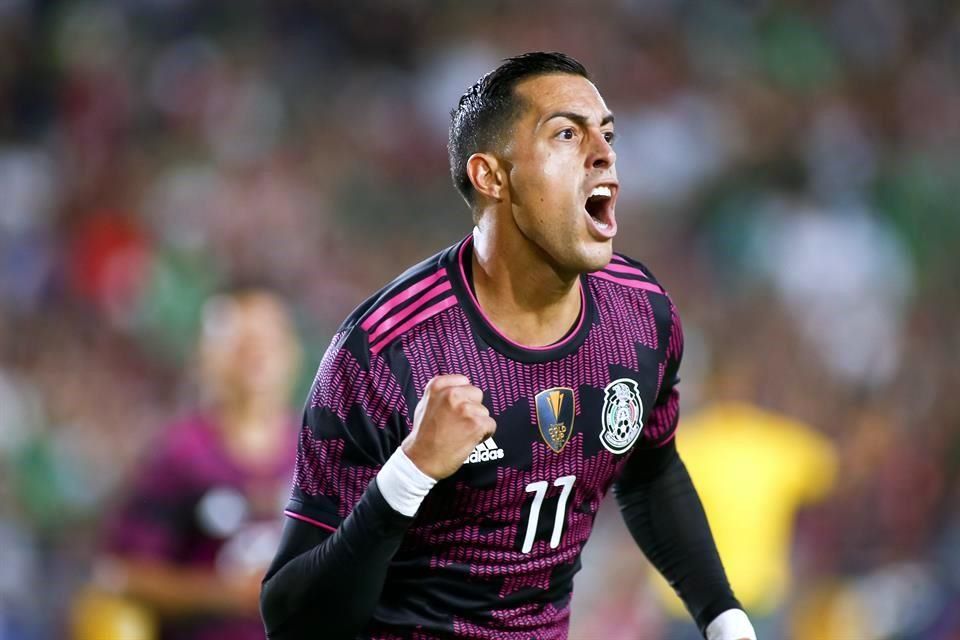 Trinidad and Tobago: In search of a surprise

Trinidad and Tobago has had good results in its previous matches, but has done so against relatively inferior opponents such as French Guiana, Montserrat and Saint Kitts and Nevis. In their most recent match, the Trinidadians overcame French Guiana after a series of 16 penalty kicks in the preliminary phase to qualify for Group A and make their debut against Mexico. 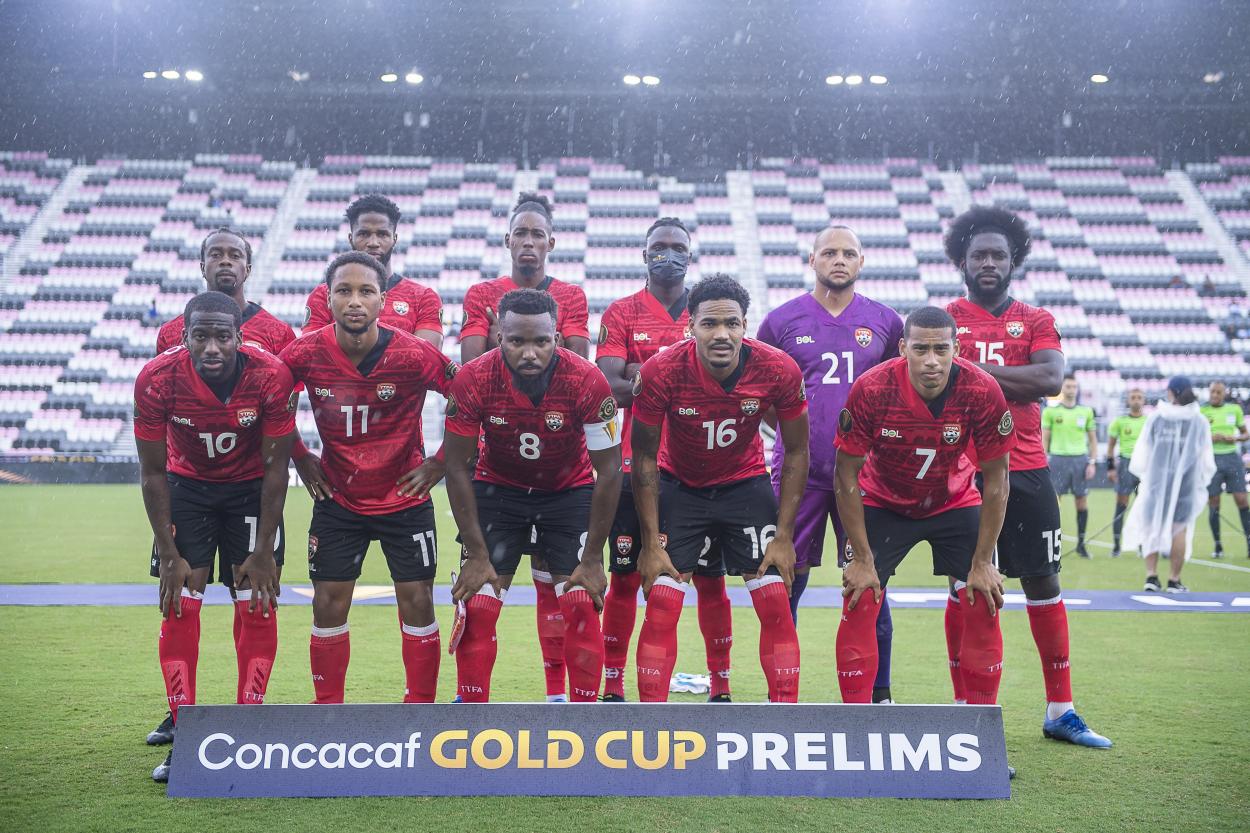 Mexico: The favorite to win

The Mexican National Team is the favorite to win this edition of the Gold Cup, since the United States will be playing with a "B" team and there are some important absences in other teams, such as Keylor Navas in Costa Rica and Alphonso Davies in Canada. Coach Gerardo 'Tata' Martino's pupils will be looking to start the tournament on the right foot in order to advance to the next round and maintain their status as favorites. In their most recent match, Mexico thrashed the Nigerian National Team 4-0 in a friendly match. 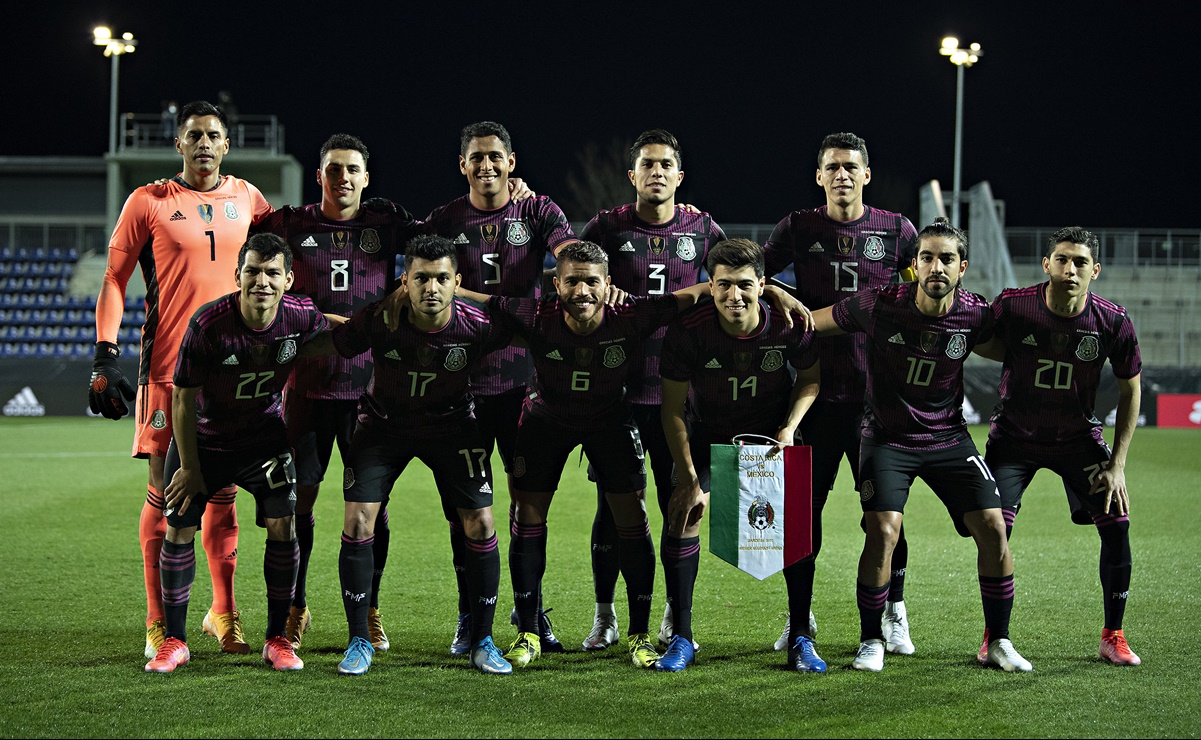 The match will be played at the AT&T Stadium

My name is Silvia and I’ll be your host for this game. We will provide you with pre-game analysis, score updates, and news as it happens live here on VAVEL. Stay tuned for this Mexico's first match!