We hope you have enjoyed watching Barcelona SC vs Fluminense in the second leg of the Copa Libertadores quarterfinals. Continue to visit the VAVEL website to keep up to date with all the information that comes up throughout the day.
10:29 PMa month ago

They are in the next round

Barcelona of Guayaquil manages to qualify to the next round of the Copa Libertadores and becomes the only non-Brazilian representative that still survives in the competition.

Both teams in the first half proposed but could not score correctly, for the second half things did not change between the two, however, after a good ball connected by Gonzalo Mastriani, the score would open the scoreboard to put the first goal.

Finally, with a well taken penalty, Fred would tie things up but it would not be enough to achieve the comeback.

Match ends at the Estadio Corona Monumental! Barcelona of Guayaquil wins the match and advances to the semifinals.

GOOOOOAL BY FLUMINENSE
10:25 PMa month ago

The referee calls a penalty kick in favor of Fluminense.
10:13 PMa month ago

The double was a close call! Mastriani surprised the goalkeeper with a shot at close range, but the shot went over the crossbar.
10:08 PMa month ago

THIS IS HOW THE GOAL WAS SCORED

In this way, Gonzalo Mastriani opened the scoring in favor of Barcelona.

Barcelona of Guayaquil also failed to finish well after a cross from Hoyos that went all over the area.
9:52 PMa month ago

Dangerous corner kick taken by Luiz Henrique and connected by André that ends up hitting the goalkeeper's far post.
9:44 PMa month ago

Barcelona close to opening the scoring! Mastriani's shot ends up in the hands of Marcos.
9:40 PMa month ago

Second half begins between Barcelona SC and Fluminense
9:17 PMa month ago

The referee ends the first half. Barcelona SC and Fluminense draw goalless for the moment.
9:15 PMa month ago

THE GOALKEEPER'S SAVE! Burrai saves a shot from Yago that ends up in the corner.
9:07 PMa month ago

It was a close call! Defensive error in Barcelona after Henrique's cross that is fixed in a good way by Riveros.
9:04 PMa month ago

Preciado is cautioned with yellow card
8:59 PMa month ago

Once again Fred tries to do some damage in a counterattack, however, he is very well caught and stopped by Pedraza.
8:53 PMa month ago

Barcelona tries to create damage through aerial play, however, Fluminense's defensive saga has managed to neutralize the attacks.
8:45 PMa month ago

Luis Henrique's shot from outside the area ends up hitting the crossbar.
8:43 PMa month ago

Fluminense arrived on the left flank but Fred's shot crashes into the backline
8:37 PMa month ago

First shot! Fred receives the ball very well and manages to turn around to get his shot just wide of the goalkeeper's far post.
8:33 PMa month ago

The first 45 minutes start between Barcelona SC and Fluminense.
8:20 PMa month ago

In a few minutes we will start the match between Barcelona SC and Fluminense, a duel corresponding to the quarter-final second leg of the Copa Libertadores 2021.
8:10 PMa month ago

The home team is already at the Monumental stadium to fine-tune details and prepare the engines for the start of the match. 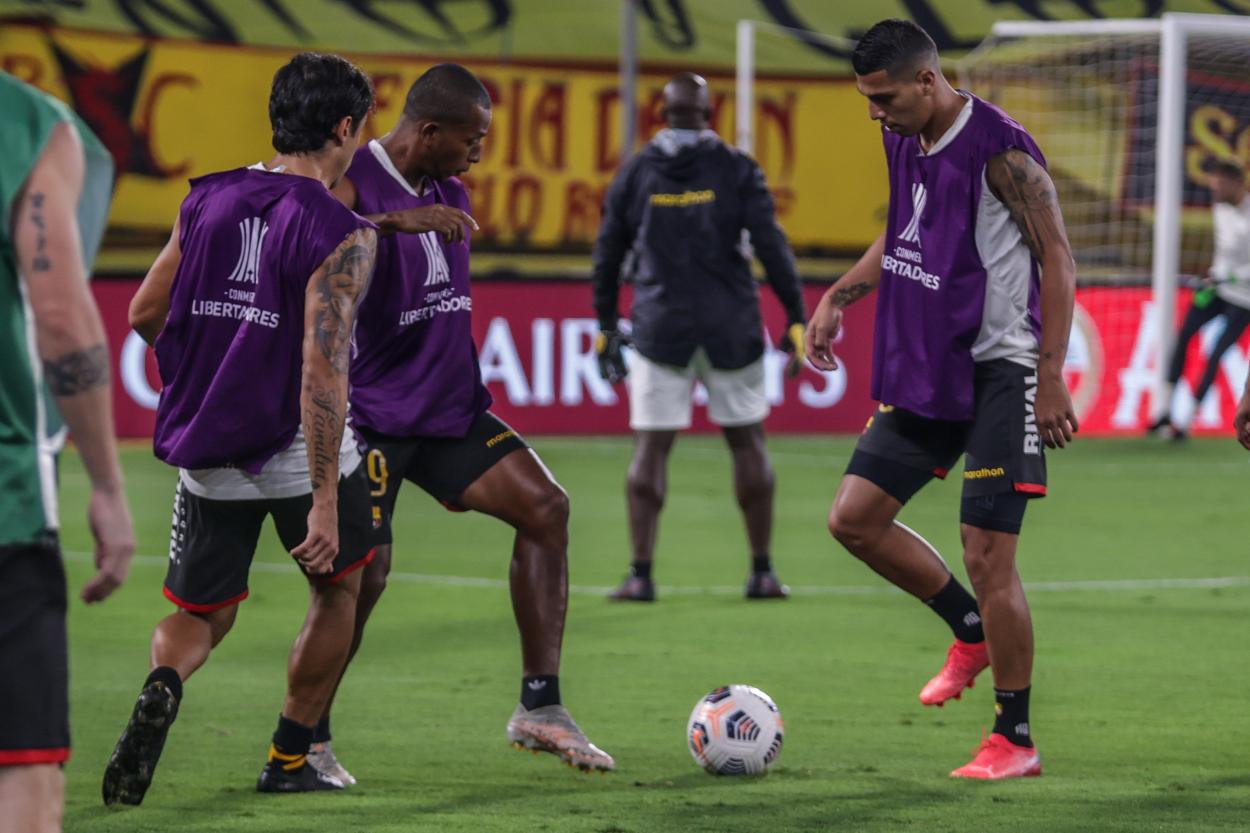 How does the home team arrive!

Barcelona SC arrives with high morale to the match and with the goal of continuing its winning streak at home in the Copa Libertadores, which would give them the qualification to the next round. The idol has four wins out of four games played, scoring eleven goals and conceding only two: against Velez Sarsfield and Santos.
7:57 PMa month ago

The situation at a glance!

Fabián Bustos's team has qualified for the moment, thanks to the goals scored in the first leg, which ended in a 2-2 draw at the Maracaná stadium last Thursday. Therefore, the coach will have to put up a solid defense in the face of Fluminense's need to score goals.
7:51 PMa month ago

All tricolores to the call!

Although they will not be present, the Fluminense team knows that their fans will not leave them alone and are asking for the long-distance support of all the Tricolor fans on board.

This is the Brazilian team's starting lineup for the second leg of the quarterfinals against Barcelona de Guayaquil.

This is how they arrived at the stadium!

Amidst the sunset and speculation prior to the start of the match, Fluminense made their appearance at the Monumental to make their presence felt in these quarter-final second leg. Will they make it back to the semi-finals!

The lineups are ready!

This is how the eleven chosen by the local coach will take the field, looking to return to the semifinals.

This is what the Estadio Monumental looks like before the start of the match between Barcelona and Fluminense! The seats may be empty, but the home team will be able to count on the support of their fans from all over Ecuador.

¡The wait is over!

The wait is finally over! Today we will have the next semifinalist of the Copa Libertadores between Barcelona of Guayaquil and Fluminense. Both teams tied 2-2 in the first leg played at the Estadio Marcaná, but this time there will be no second leg, we are not leaving without a winner today!

Do not miss a detail of the match with the live updates and commentaries of VAVEL. Follow along with us all the details, commentaries, analysis and lineups for this Barcelona SC vs Fluminense match.
10:31 PMa month ago

What time is Barcelona SC vs Fluminense match for Copa Libertadores?

This is the start time of the game Barcelona SC vs Fluminense of 19th August in several countries:

The magic of Jogo bonito lives in Gabriel Teixeira, the player trained in Fluminense's youth academy knows what the institution means and has demonstrated it little by little based on the opportunities he has been given by the coach every time he is called to be part of the senior team. Since he has been taken into account by the A team, the Brazilian has appeared 33 times in the starting line-up, scored 3 times and assisted once, and has already scored his first goal in the current edition of the Copa Libertadores, so he could be the confidence boost to be the determining factor of the match in favor of the Brazilian team.

The Uruguayan born in Montevideo, Gonzalo Mastrani, has been one of the most important pieces that Barcelona de Guayaquil got during the recent transfer market because his vast experience has helped him to be gradually included in the starting lineup or have some minutes of game time by the coach. Throughout his career he has scored 68 goals of which 28 belong to the Ecuadorian team, also, he was one of the figures during the Libertadores game so he could be the factor that catapults Barcelona to another instance of semifinals. 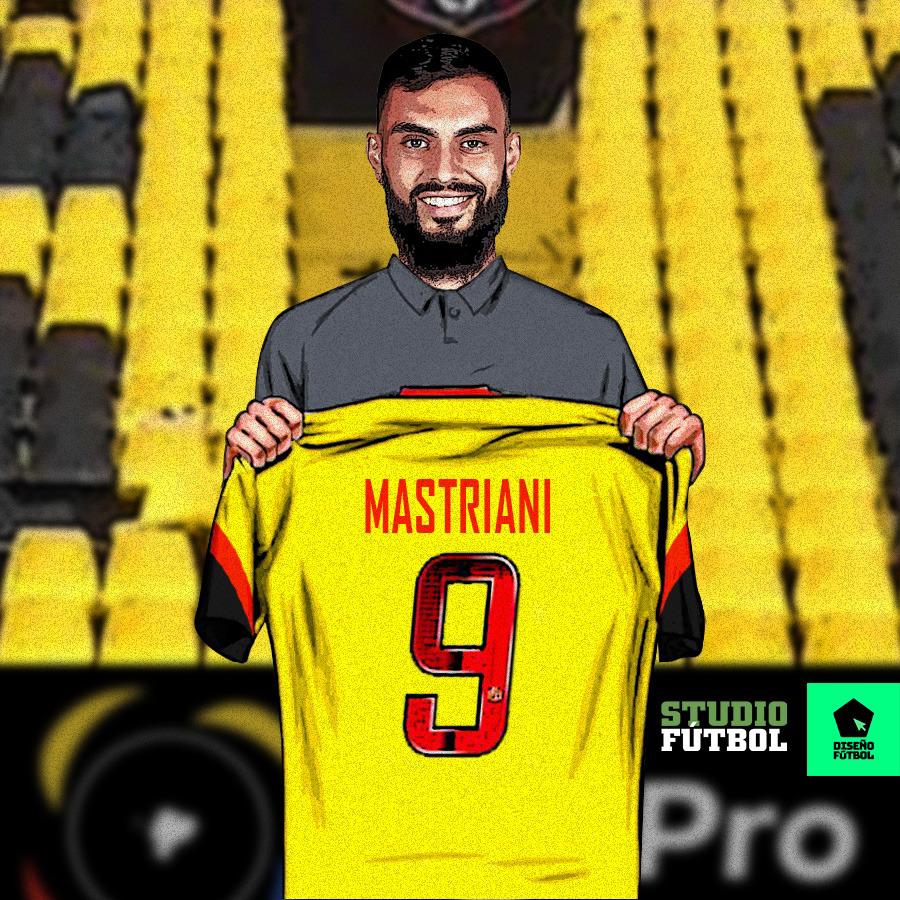 Barcelona de Guayaquil and Fluminense have met only twice in their history, a victory in the Florida Cup for "the colossus of America" and the most recent draw in the Copa Libertadores have been the only duels between the two teams, however, the balance is slightly tilted towards the Ecuadorian side as the goal difference in the current competition favors the locals with +7 and +3 for the visiting team. 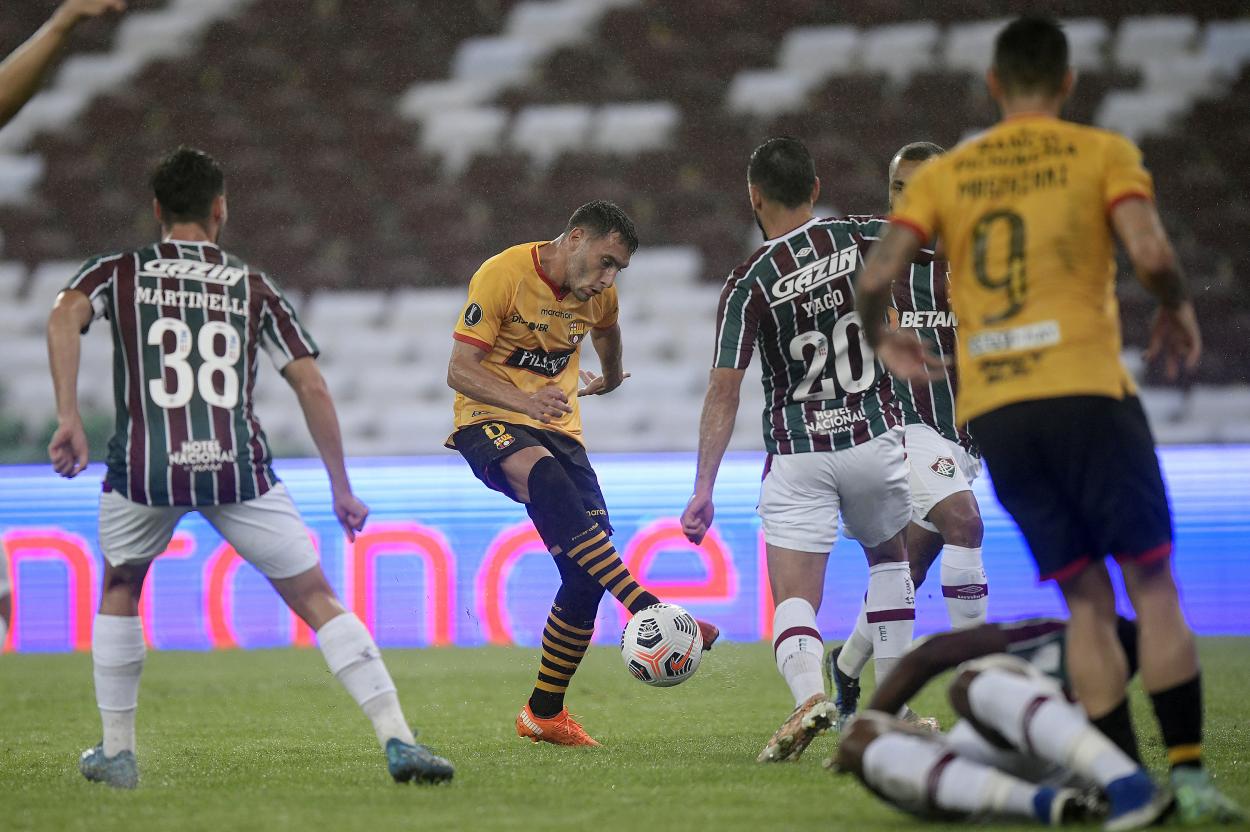 For this match, Esteban Ostojich will be the center referee, accompanied by Carlos Barreiro and Pablo Llarena as assistants 1 and 2 respectively, and José Argote will be the fourth official. In the VAR, referees Victor Carillo and Piero Maza will be in charge of monitoring any doubtful play inside the area or that deserves a red card.
9:56 PMa month ago

Seeking to return to the semifinals

Contrary to the Ecuadorian team, Fluminense is not a team that has been characterized by having several participations in the Copa Libertadores over the years, counting the current edition, they have only been present on seven occasions of which, the most remembered is the year 2008 where they reached the final phase and lost to Liga de Quito in a penalty shootout after an extraordinary match, which was a great final for this tournament. Since then, they have not managed to return to the same stage and now they could do it, however, for this they will have to go out with the tricolor claw that characterizes them because having conceded 2 goals at home could end up being a decisive factor for the qualification to the semifinals.

They already realized that they can do it

The last time Barcelona was in the semifinals was in the Copa Libertadores in 2017 and the last time they were close to touching glory was in the distant year of 1998 where the Brazilian team, Vasco da Gama won their first title at the expense of the Ecuadorians. However, this time could be the moment they have been waiting for, since after the good taste they left last Thursday in jogo bonito territory, the fans and the team can start dreaming of eliminating Fluminense and getting 180 minutes away from reaching another final of the best club tournament in America.

The match does not end without a winner

After a hard-fought 2-2 draw at the Maracana Stadium between Fluminense and Barcelona, this time there will be no continuation of history as only one team will have the opportunity to advance to the next round of the Copa Libertadores in search of engraving its name in the Eternal Glory. For this match, it is the Ecuadorian team who has the advantage because by scoring as a visitor they could advance to the next round, winning or tying by a score of no more than 3 goals, on the other hand, the Brazilian team will have to win by any score or tie by a score of more than 3 goals.

The Barcelona SC vs Fluminense match will be played at The Banco Pichicha Monumental Stadium, in Guayaquil, Ecuador. The kick-off is scheduled at 20:30 pm ET.
9:36 PMa month ago

Welcome to VAVEL.com’s LIVE coverage of the 2021 Copa Libertadores: Barcelona SC vs Fluminense!

Chicago House AC vs Michigan Stars FC preview: How to watch, kick-off time, predicted lineups, and ones to watch 4 hours ago