Thank you for listening to this Ligue 1 match, have a good afternoon and see you next time!

Marseille wins at home against Nantes, takes the three points, gets closer to the Champions League and, at least until the weekend, prevents PSG from winning Ligue 1!

Coco got a yellow for an attacking foul, but he already had one, so he was sent off!
4:51 PMa month ago

Appiah is yellow carded for a hard tackle on Payet in midfield.
4:50 PMa month ago

Substitution in Marseille: Harit is out and Kolasinac is in.
4:46 PMa month ago

Double substitution in Marseille: Lirola and Luan Peres left for Gueye and Rongier.
4:41 PMa month ago

Fabio is yellow carded for a hard tackle on Lirola in midfield.
4:40 PMa month ago

Bukari received in front, tried to cover, but Lopez came back and managed to save Marseille!
4:35 PMa month ago

Gerson received the ball on the left end and managed to get a cross for Harit to shoot and send it into the back of the goal!
4:33 PMa month ago

Milik got his first shot of the game and forced Lafont to save Nantes.
4:29 PMa month ago

Double substitution at Nantes: Pallois and Geubbels left for Coulibaly and Merlin.
4:28 PMa month ago

Substitution in Marseille: Out goes Bakambu and in comes Milik.
4:14 PMa month ago

Payet took the penalty kick and sent it into the right corner, now with Lafont coming out to the left, to tie the game once again!
4:12 PMa month ago

Gerson received on the right, invaded the area and was hit by Fábio with a cart, winning the maximum penalty!
4:04 PMa month ago

Geubbels makes the first touch on the ball and it rolls into the second half of the match!
4:04 PMa month ago

The teams reappeared on the pitch to start the second half. For Nantes, Simon and Blas are out for Bukari and Fabio.
3:50 PMa month ago

In an intense game Nantes goes on to beat Marseille and take the three points home!
3:49 PMa month ago

Yellow for Coco, for pulling Gerson's shirt from the right near the area. The free-kick was hit straight at the goal and the defense took it off the line.
3:45 PMa month ago

After conceding the equalizer, Nantes went on the attack and Coco, with a hard shot from inside the box, sent it into the left corner, covering Lopez with a deflection in the middle.
3:43 PMa month ago

Payet went for the ball and sent it into the right corner, with Lafont hitting the corner but failing to get to the ball, seeing the hosts tie the game!
3:43 PMa month ago

Kamara received the pass inside the box and was brought down by the defender, earning the maximum penalty!

Bakambu received in front, inside the area, and hit a cross after dribbling Lafont, but he hit a cross to the outside!
3:29 PMa month ago

In a corner kick from the right Andrei Girotto got the header to the bottom of the goal!
3:26 PMa month ago

Gerson risked his shot already inside the area and sent it over the goal.
3:24 PMa month ago

Simon got the cross to try and find Geubbels, but he didn't get to the ball and it went out for a goal kick.
3:15 PMa month ago

Kamara got a great pass through the middle to Harit, who beat Lafont and sent it to the right side of the goal!
3:10 PMa month ago

Gerson was brought down in the midfield and earned a dangerous, frontal free-kick, which Payet hit and sent over the goal, into the net from the outside!
3:01 PMa month ago

Bakambu makes the first touch on the ball and it rolls into the first half of the match!
2:57 PMa month ago

Also today, at the same time as this match, we have Lens vs Montpéllier, Angers vs PSG, Strasbourg vs Rennes and Brestois vs Lyon.
2:48 PMa month ago

The round started earlier today and has five games in it, where Monaco is beating Nice 1-0 and Bordeaux is beating Saint-Étienne 3-2. At 0-0 we have Lorient vs Metz and Troyes vs Clermont. At 1-1 we have Reims-Lille.

The players take to the field to begin their warm-up exercises.
2:14 PMa month ago

Olympique is lined up and will take the field with: 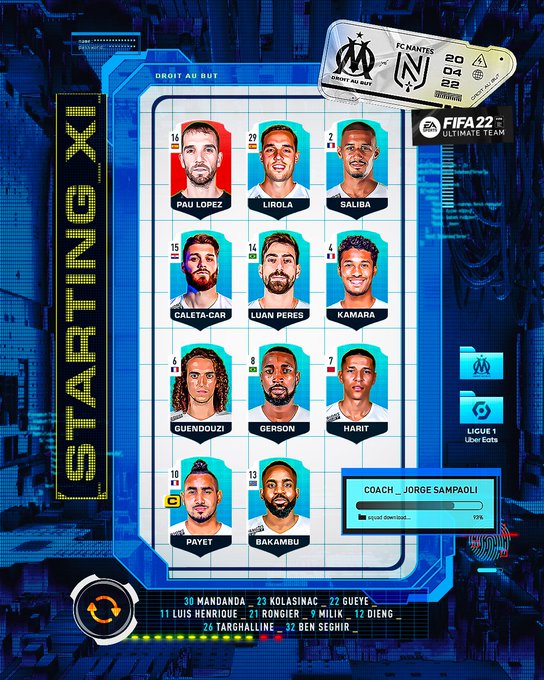 Nantes is lined up and will take the field with: 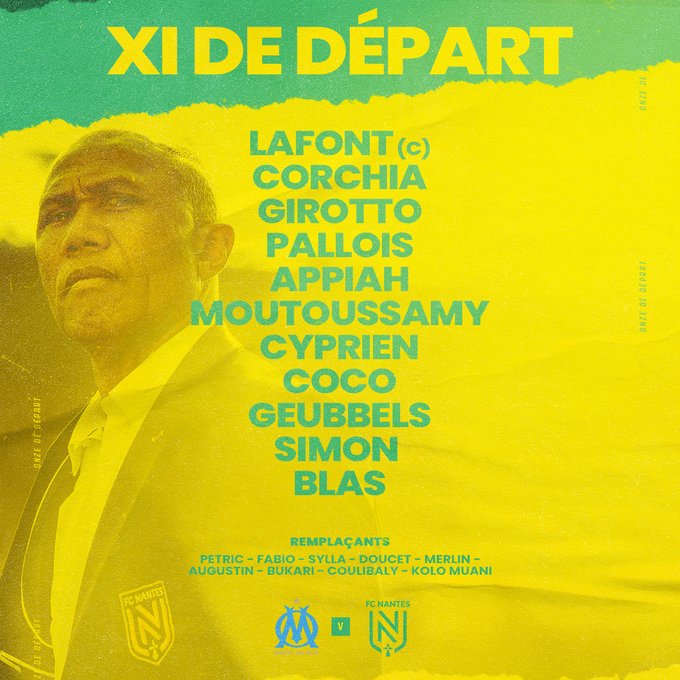 Now the broadcast of the Ligue 1 match between Olympique and Nantes begins!

Do not miss a detail of the match with the live updates and commentaries of VAVEL. Follow along with us all the details, commentaries, analysis and lineups for this Marseille vs Nantes match.
1:54 PMa month ago

If you want to watch the game Marseille vs Nantes live on TV, your options is: none.

What time is Olympique Marseille vs Nantes match for Ligue 1?

This is the start time of the game Olympique Marseille vs Nantes of 20th April 2022 in several countries:

Ruddy Buquet will referee the match, with assistants Julien Pacello and Guillaume Debart. VAR will be on charge of Hamid Guenaoui.
1:39 PMa month ago

The possible Olympique team for the match is: Pau Lopez, Roniger, Saliba, Caleta-Car and Peres; Geuye, Kamara and Guendouzi; Harit, Gerson and Payet.
1:29 PMa month ago

Sampaoli will be without De La Fuente and Balerdi, both injured, as well as Milik. Koumbouaré will not be able to use Traore, Pereira de Sá, injured, and Castelletto, suspended.
1:24 PMa month ago

Olympique is in second place in the table, with 59 points, while PSG has 74 points and is swimming towards the title. In third place are Rennes, with 56 points, and in fourth Nice, with 54. Nantes is in 10th place with 47 points, two behind Lyon and one behind Lille, and five ahead of Montpellier.
1:19 PMa month ago

Nantes, on the other hand, are coming from two 1-1 draws in their last two games. Against Stade Brestois, on Sunday, the goals were scored by Chardonnet and Kolo Mauni. And against Angers, the following Sunday (17), the goals were Boufal and Coulibaly.
1:14 PMa month ago

Olympique come into the match on the back of a win and a loss in their last two matches. The victory was against PAOK, away from home, on Thursday (14), 1-0, in the second leg of the Conference League quarterfinals. The goal was scored by Payet. And the defeat was 2-1 to PSG last Sunday (17), in Ligue 1, with goals from Neymar and Mbappé for PSG and Caleta-Car for Olympique.
1:09 PMa month ago