Thank you all for joining us in this intense duel with an exciting ending, it has been a pleasure to be with all of you. See you all again!
5:07 PM22 days ago

END OF THE MATCH: LIVERPOOL IS THE FIRST FINALIST

The referee has added two minutes of time for the end of this match;
4:45 PM22 days ago

Capoue leaves after being suspended for a double yellow card;
4:43 PM22 days ago

Fabinho, who has scored the first goal, leaves the field and Milner
4:37 PM22 days ago

Yellow card for Alexander Arnold, the first of the match for a Liverpool player;
4:35 PM22 days ago

Sadio Mane arrives before Rulli and does not miss the empty goal to set the tie;
4:31 PM22 days ago

This was Luis Diaz's goal

Luis Diaz scored the second and Liverpool regained the lead they had at the start of the match
4:26 PM22 days ago

Luis Diaz's shot hits Albiol and grazes the post, Liverpool had the chance to equalize.
4:22 PM22 days ago

Salah's pass to Fabinho who with a good shot puts Liverpool ahead on the scoreboard. Rulli could have done more in the action;
4:17 PM22 days ago

Villarreal is saved, Alexander Arnold's shot that ended up in the wood, it is true that the ball touched a player of the Spanish team and was poisoned;
4:07 PM22 days ago

First change in the second half, Klopp leaves Jota in the locker room while Luis Diaz enters the field
4:06 PM22 days ago

END OF THE FIRST HALF: THE TIE GOES TO THE BREAK LEVEL

Villarreal equalizes the tie when Capoue's cross is headed into the net by Coquelin
3:41 PM22 days ago

Hand to hand between Lo Celso and Allison that ended with the Argentine midfielder on the ground claiming a penalty, but the referee says there is nothing punishable. Very doubtful play
3:33 PM22 days ago

Parejo's cross ended up in the hands of Allison, who took it out quickly, looking for a counterattack.
3:26 PM22 days ago

Dia wins the match against Alexander Arnold, but the referee disallows the action for offside;
3:15 PM22 days ago

Liverpool's lateral free kick is centered by Robertson and finished off by Jota, but the ball goes over the end line and it is a goal kick for Villarreal;
3:11 PM22 days ago

Dia opens the can and allows subs to dream

Villarreal goes ahead to get closer in the tie, Estupiñ'an passes to Capoue who assists Dia who scores the first of the match
3:05 PM22 days ago

The match has already kicked off at Ceramics
2:57 PM22 days ago

In five minutes begins the duel between Liverpool and Villarreal, the 22 protagonists are in the tunnel of dressing rooms ready to go out to the field where they will hear the anthem of the Champions
2:41 PM22 days ago

Villarreal has never lost a Champions League match in a home tie and is also unbeaten in 12 home matches;
2:25 PM22 days ago

The English side has only won five of the last 14 times they have visited Spain;
2:16 PM22 days ago

Jota and Keita are the only two new players compared to the first leg;
2:08 PM22 days ago 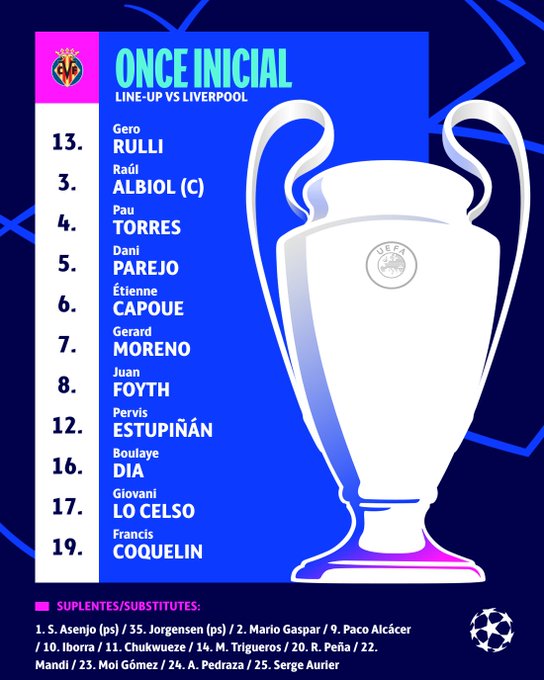 In 1 hour the match between Villarreal and Liverpool will start, both the preview and the minute by minute of the Champions League semifinals can be followed here on VAVEL

Statements from a Klopp, who has renewed with Liverpool until 2026.

It is a semifinal and it should be difficult. We never expected it to be easy. We played a good game at home and now we need to do it away as well. You never know if we will have another chance in a semifinal. We arrived well to the tie but we know that if we start off on the wrong foot tomorrow (Tuesday) everything can get complicated. We do not have to think about the past, we must be prepared to suffer and be attentive in every play. We have to go out to press and know how to suffer. If we have won all the away games in the Champions League it is because we have done well at the home of Atlético Madrid, Porto or Inter Milan. We didn't win by being defensive and counterattacking. We have always played being ourselves and that is what we have to do again.

Where and how to watch Liverpool vs Villarreal ?

The match of the Champions League between Villarreal vs Liverpool will start 15:00 . E.T. and could be followed on ESPN

What time is Villarreal vs Liverpool in the Champions League ?

This is the kickoff time for the Villarreal vs Liverpool match on May 3th in several countries:

We are having good matches at home, good referees and good tuning with our people to give our best version. It's complicated to overcome a two-nil deficit. We benefit from the change in the double goal rule. We are looking to respond so that situations appear in the game to be close to equalizing the score. The field factor there was key. We have to play a perfect match. We have to play a perfect game. To provoke something that nobody has provoked them. We have to find the weaknesses. We are very excited to play in the Champions League semifinals. They were better on their field, but we were able to defend well to avoid giving them more income. We're determined to play our game and look for our chances. They have few defeats and are usually better than the rest. We want to live this moment with our people. We are playing with our people and we have to win. We have to defend brutally. Different from Liverpool and be able to find our game.

How does Liverpool arrive?

Liverpool have now won five consecutive victories and have gone 12 consecutive matches without defeat. The last time they lost a match was on March 8 against Inter Milan in the Champions League round of 16, but it was enough for Klopp's team to qualify for the quarterfinals. In the Premier League they are in second place with 82 points, just one point behind leaders Manchester City.
11:52 PM23 days ago

How does Villarreal arrive?

The submarine team arrives after two consecutive defeats, in Champions League and the most recent one in the Spanish League where they lost 2-1 against Alavés in Vitoria. This defeat is a step back for Unai Emery's team, who have the objective of getting into European places. Right now they are in the standings in the last position with 52 points, four points behind Real Sociedad, who are ahead of them.
11:47 PM23 days ago

Liverpool and Villarreal have met on three occasions with a balance of two wins for the English team and one for the submarine team. The most recent was last week, when Klopp's side won the first leg. They also met in 2016 in the semifinals of the Europa League where Villarreal won 1-0 in the first leg and Liverpool won 3-0 in the second leg to qualify for the final. Finally, the English team lost in the final against Sevilla.
11:42 PM23 days ago

Venue: The match will be played at La Cerámica, a stadium that was inaugurated in 1923 and has a capacity of 24,500 spectators.

Villarreal and Liverpool will face each other in the second leg of the Champions League semifinals, where the English team has a two-goal advantage after winning at Anfield.

Welcome to VAVEL.COM's LIVE coverage of Villarreal vs Liverpool in the Champions League.

My name is Manuel Carmona Hidalgo and I will be your antifrion for this match. We will offer you the pre-match analysis and news here&iacute; live from VAVEL.