Thank you for following the Alianza Lima vs Colo-Colo coverage on VAVEL. Keep visiting the VAVEL website to keep up to date with everything that is happening in the world of sports.
11:56 PM18 days ago

The match ends at the National Stadium in Peru, Alianza Lima and Colo-Colo split points at the end of Day 4 of the Copa Libertadores Group Stage.
11:43 PM18 days ago

A Colo Colo cross hit the post and almost allowed Gabriel Costa to score the 2-1. Alianza Lima was saved.
11:09 PM18 days ago

GOOOOOOOL FOR ALIANZA LIMA! GOOOOOL FOR THE EQUALIZER!
10:49 PM18 days ago

The first half ends at the National Stadium in Peru, Colo Colo momentarily beats Alianza Lima.
10:38 PM18 days ago

Campos leaves a rebound for Lucero to head, but the ball goes over the goal. Alianza Lima is saved.
10:24 PM18 days ago

Great cross into Alianza Lima's six-yard box where Lucero fails to finish with an empty net. It could have been 1-0 for Colo Colo.
10:22 PM18 days ago

COLO COLO SCARES! Colo Colo is in control of the ball and begins to look for space in Alianza Lima's half. There are still no shots on goal.
10:09 PM18 days ago

The match between Alianza Lima vs Colo Colo starts today at the National Stadium in Peru, both clubs will be looking for points.
10:04 PM18 days ago

In a couple of minutes we will begin with the broadcast of Alianza Lima vs Colo-Colo, match corresponding to match day 4 of the Copa Libertadores 2022.
9:59 PM18 days ago

In their last match, Colo Colo defeated Alianza Lima at the Monumental Stadium in Chile, by a score of 2-0. The Chileans won and easily controlled the match to take three more points.
9:54 PM18 days ago

This is the starting eleven that Alianza Lima will send to the field of the National Stadium of Peru, the locals will be looking for their first 3 points of the tournament to continue with life in the Copa Libertadores. 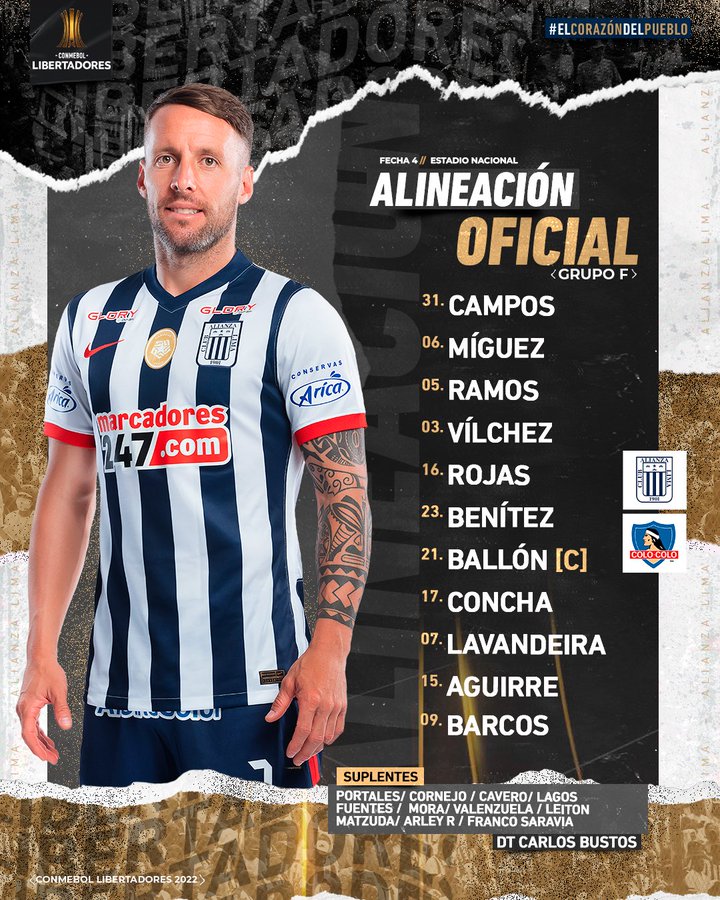 HOW DID COLO-COLO FARE LAST MATCH?

The last match that Colo-Colo played was against River Plate at the Monumental Stadium in Chile. After a close match, the Argentine team took the lead in the 82nd minute with a great goal by Matías Suárez, and later, Ezequiel Barco scored the 0-2 in the 89th minute.
9:44 PM18 days ago

This is Colo-Colo's starting eleven for their match against Alianza Lima. The Chileans will be looking to secure second place in the group with a victory in Peru. 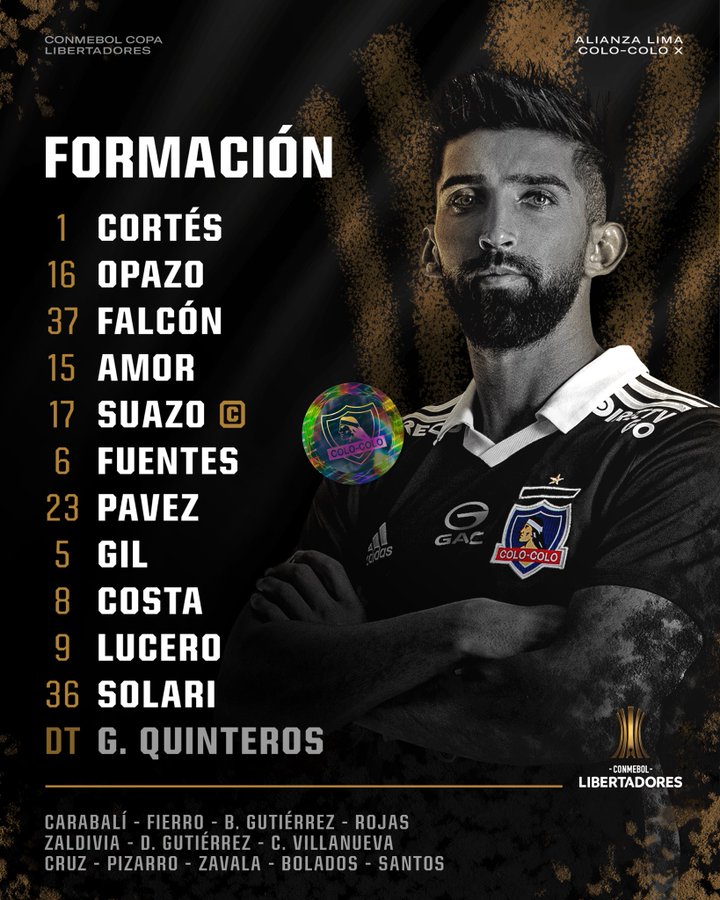 This is Colo-Colo's starting eleven for their match against Alianza Lima. The Chileans will be looking to secure second place in the group with a victory in Peru.
9:34 PM18 days ago

Alianza Lima traveled to Brazil last match to face Fortaleza, at the 50th minute Silvio "El Chino" Romero gave the Brazilian club the lead, however, later at the 70th minute Pablo Lavandeira would give the Peruvian club the chance to dream with the equalizer, however, 9 minutes later, Hércules would score the final goal to seal the Brazilian victory.
9:29 PM18 days ago

CAN STILL DREAM OF THE SOUTH AMERICAN CUP

The Alianza Lima team can still dream of South American competitions despite the bad start they have had in the tournament, because although they have not managed to score in the three previous rounds, they are three points away from third place and fighting for a place in this year's South American Cup.
9:24 PM18 days ago

LOOKING TO CONTINUE WITH THE RUNNER-UP POSITION

Colo-Colo is currently the runner-up in Group F with 6 points out of 9, and if they win this match, the Chilean team would secure second place for one more day and would be closer to qualify directly to the round of 16 of the Copa Libertadores.
9:19 PM18 days ago

The wait is over, the CONMEBOL Libertadores Cup activity returns with the duel between Alianza Lima and Colo-Colo from the National Stadium of Peru, both teams will play their 4th match of the group stage looking to add and continue their way in search of eternal glory.
9:14 PM18 days ago

Do not miss a detail of the match with the live updates and commentaries of VAVEL. Follow along with us all the details, commentaries, analysis and lineups for this Alianza Lima vs Colo-Colo match.
9:09 PM18 days ago

What time is Colo-Colo vs Alianza Lima match for Copa Libertadores?

This is the start time of the game Colo-Colo vs Alianza Lima of 13th April in several countries:

Watch out for this Alianza Lima player:

For this match, experienced defensive defender and Peru national team player, Christian Ramos will be the player to watch throughout these 90 minutes. The Alianza Lima central defender will have to stop Colo-Colo's strong attacks and will be one of the key players to stop them and keep a clean sheet. 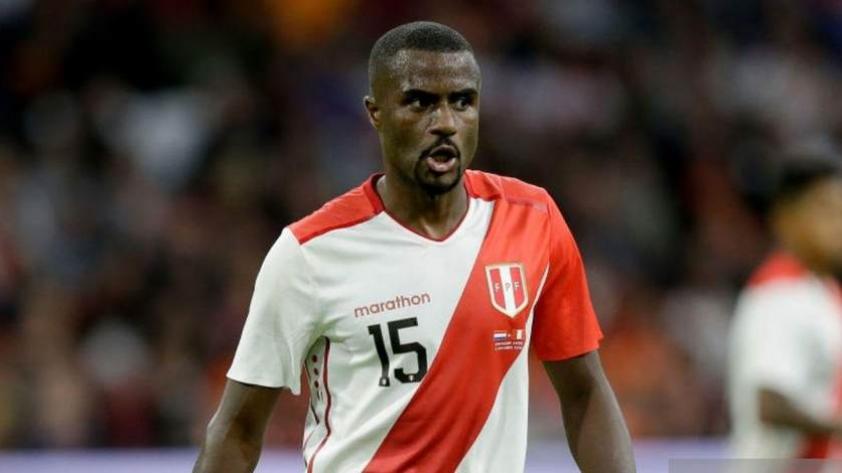 Watch out for this Colo-Colo player:

He is one of the promising players that the Colo-Colo squad has and a killer inside the small area, the player to follow for this match will be Pablo Solari, star of the Chilean team that will look to break the nets against Alianza Lima and give three more points to his team, likewise, last match he collaborated for Colo-Colo to beat fortaleza so he will be the player to follow throughout the 90 minutes. 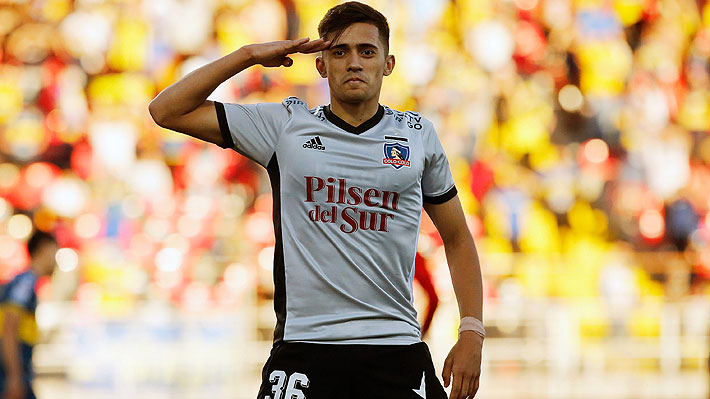 Colo-Colo and Alianza Lima have never met on only one occasion in the history books, this will be the second occasion that the two sides have met in an official and Copa Libertadores duel. Historically, Colo-Colo is good at facing Peruvian teams, with 8 wins, 4 draws and 3 defeats. On the other hand, Alianza Lima does not have a good record against Chilean teams, with 4 wins, 2 draws and 8 defeats.
8:39 PM18 days ago

The National Stadium of Peru, popularly known as Estadio José Díaz2, Estadio Nacional de Lima or simply Estadio Nacional, is a multipurpose stadium located in the neighborhood of Santa Beatriz, in the district of Lima, belonging to the Peruvian capital of the same name.

It has, according to the ITSE Certificate N°088-2016-IPD, capacity for 43,086 spectators: 39,635 in its four stands and 3451 in the box-suites. Many people, including sports reporters, call it "The Colossus of Jose Diaz", due to the adjacent street named after that military man, who belonged to the Army of the Andes.

The National Stadium is the stadium in Peru where more Copa Libertadores matches have been played and is the third in South America. Estadio Nacional along with Estadio Monumental are the only stadiums in Peru to have official logos.

Looking for their first win in the Copa Libertadores

On the other hand, Colo-Colo has had a good performance so far in the Copa Libertadores as it has two wins and one loss, also, it is second in the general table and everything seems to indicate that it will fight with River Plate for the group leadership. Last match they went to the Monumental Stadium to face River Plate, however, things did not turn out positively for the Chilean team as the Argentinians won 2-1 and won a victory that assured them the leadership of group F for now.
8:29 PM18 days ago

To make home advantage count on the scoreboard

The Alianza Lima squad will receive Colo-Colo in what will be the fourth round of the Copa Libertadores, however, the time has come for them to make their home advantage count, as they have had a horrible start to the championship and must score points if they want to dream of any possibility of advancing to the group stage. Last match, Alianza Lima went to Brazil to face Fortaleza, however, the Peruvian team was affected by the locale as Fortaleza won at their home ground and handed them another defeat to leave them at the bottom of the group.
8:24 PM18 days ago

The road to Eternal Glory in South America has begun for several teams that will seek to reach the final and write their name in golden letters in the cup that every team in the continent would like to have in their trophy cabinets, the Copa Libertadores. The road already began a few days ago, and now it will be time for the clubs to play their fourth match of the competition, thus having the opportunity to score points to try to ensure their qualification to the next round of the tournament and continue their route to the ante sala.
8:19 PM18 days ago

The Alianza Lima vs Colo-Colo match will be play at Estadio Monumental de Chile, in Santiago, Chile. The kick-off is scheduled at 22:00 pm ET.
8:14 PM18 days ago

Welcome to VAVEL.com’s LIVE coverage of the 2022 Copa Libertadores: Alianza Lima vs Colo-Colo!