Thank you for following Espanyol vs Real Madrid live on VAVEL. Keep visiting the VAVEL website to keep up to date with everything that is happening in the world of sport.
4:50 PM3 months ago

The duel between Espanyol and Real Madrid ends, the Merengues take the victory and for the moment the champion continues without receiving a dent in the crown.
4:46 PM3 months ago

Rodrygo (Real Madrid) left footed shot from outside the box is blocked. Assisted by Aurélien Tchouaméni.
4:18 PM3 months ago

Javier Puado (Espanyol) left footed shot from the right side of the box is too high following a corner.
4:09 PM3 months ago

Javier Puado (Espanyol) right footed shot from the center of the box misses.
4:07 PM3 months ago

The first half is over at the RCDE Stadium, Espanyol and Real Madrid tied 1-1 at the moment.
3:48 PM3 months ago

GOOOOOOOL FOR ESPANYOL! JOSELU PUTS THE TIE ON THE SCOREBOARD
3:42 PM3 months ago

Attempt blocked on the right side of the goal. Vinicius Souza (Espanyol) right footed shot from outside the box is saved in the bottom right corner. Assisted by Edu Expósito.
3:32 PM3 months ago

Stirring stopped. Vinícius Júnior (Real Madrid) right footed shot from the left side of the box is saved in the bottom right corner.
3:15 PM3 months ago

GOOOOOOOOOL FOR REAL MADRID! Vinicus Jr scores the first for Real Madrid and opens the scoring in Barcelona.
3:10 PM3 months ago

Eder Militão (Real Madrid) wins a free kick in the defensive half.
3:01 PM3 months ago

The match kicks off from the RCDE Stadium, the Merengue team visits Espanyol in this closing matchday.
2:48 PM3 months ago

In a couple of minutes we will start with the broadcast of the duel between Real Madrid and Espanyol, duel corresponding to date 3 of LaLiga from the RCDE Stadium.
2:42 PM3 months ago

This is Espanyol's lineup to dethrone Real Madrid, the locals will try to give a blow on the table and dent the champion's crown.

This is Real Madrid's lineup to face Espanyol in their third Laliga duel, the Merengues want to regain the overall lead. 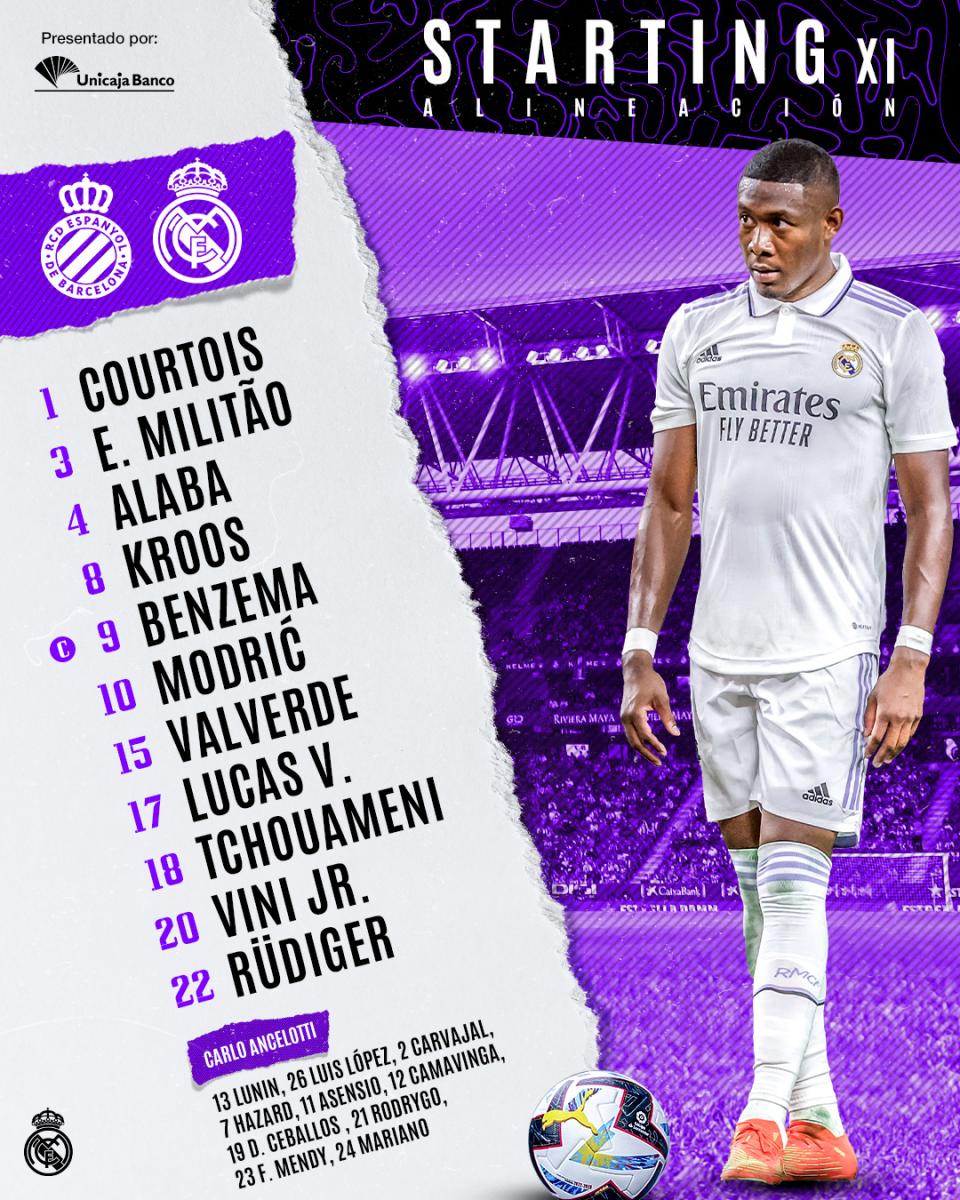 TO SHAKE OFF A BAD STREAK

The Espanyol team has not been able to taste victory in LaLiga as in their last 9 LaLiga matches they have added 4 draws and 5 defeats but have not been able to consummate a victory. They are 6 duels away from equaling their worst streak in the 21-22 season.
2:32 PM3 months ago

THERE IS MORE TIME FOR MODRIC

Yesterday was the 10th anniversary of Luka Modric's signing with Real Madrid, a decision that changed the course of his career forever, the Croatian arrived to be an axis in the midfield and make history with the Merengue squad by winning 5 championships, before that, Ancelotti said that he sees more time for Modric.
"He has been a good signing for Real Madrid and for him. His career has been with a lot of continuity and always playing very well, with a very high level. He can continue more because I see him fresh and very motivated. I think he will continue for one more season.
2:27 PM3 months ago

THE COACH SAYS NO ONE IS COMING

At Carlo Ancelotti's press conference ahead of the match against Espanyol, the Los Blancos manager confirmed that Ascensio could leave Real Madrid, however, if the Spaniard were to leave Real Madrid, the Merengue team would not be looking for more signings.
"I don't know anything new about Asensio, only that he is assessing his situation. On September 2 everything will be clarified and if he stays he will be an important player and I will be delighted, because last year he contributed a lot to the team and this season he would do so too."
2:22 PM3 months ago

On the other side, Espanyol received Rayo Vallecano at the RCDE Stadium, however, the locals did not count on the astuteness shown by the visiting team to impose themselves on foreign territory. To begin with, Espanyol was left with a disadvantage on the field in the 30th minute after a sending-off, and then it was the audacious Isaac Camacho and Pathé Ciss who gave the home side the win.
2:17 PM3 months ago

The champions of Spain and Europe are back in action on matchday 3 of LaLiga after traveling to Vigo to face Celta Vigo at home and in front of their own fans. As expected, the home team led by Professor Carlo Ancelotti ran over the locals with a score of 1-4 in favor of Madrid. The goals were scored by Benzema, Modric, Vinicus and Federico Valverde. On the other side it was Iago Aspas who scored.
2:12 PM3 months ago

The wait is over in LaLiga, Real Madrid, champion of Spain, returns to action in its local league facing Espanyol in what will be the third matchday of the season. On the one hand, the Merengues come from beating Celta Vigo by four goals to one and add three more points to the bag, on the other hand, Espanyol lost by two goals to zero against Rayo Vallecano, continuing their winless path at the beginning of the season.
2:07 PM3 months ago

Do not miss a detail of the match with the live updates and commentaries of VAVEL. Follow along with us all the details, commentaries, analysis and lineups for this Espanyol vs Real Madrid match.
2:02 PM3 months ago

What time is Espanyol vs Real Madrid match for LaLiga Match?

This is the start time of the game Espanyol vs Real Madrid of 28th Auguts in several countries:

Watch out for this Espanyol player:

For this match, the player to watch will be Vinícius Souza, the midfielder with great experience in LaLiga football has been characterized by putting order on the pitch. Vinícius Souza has become one of the players with the greatest projection in the midfield, also, he has been one of the fundamental players to have offensive action. 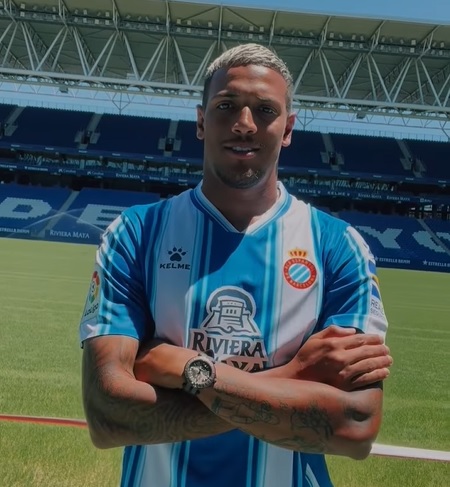 For this match, the player to watch should be Frenchman Karim Benzema who has established himself as the scorer and star of the Merengue side. The Gallic star had a great season where he was fundamental for Madrid to win the UEFA Champions League, now, he will try to repeat the same consistency that characterized him and lead Madrid again in a new adventure where they will have to defend the European crown. 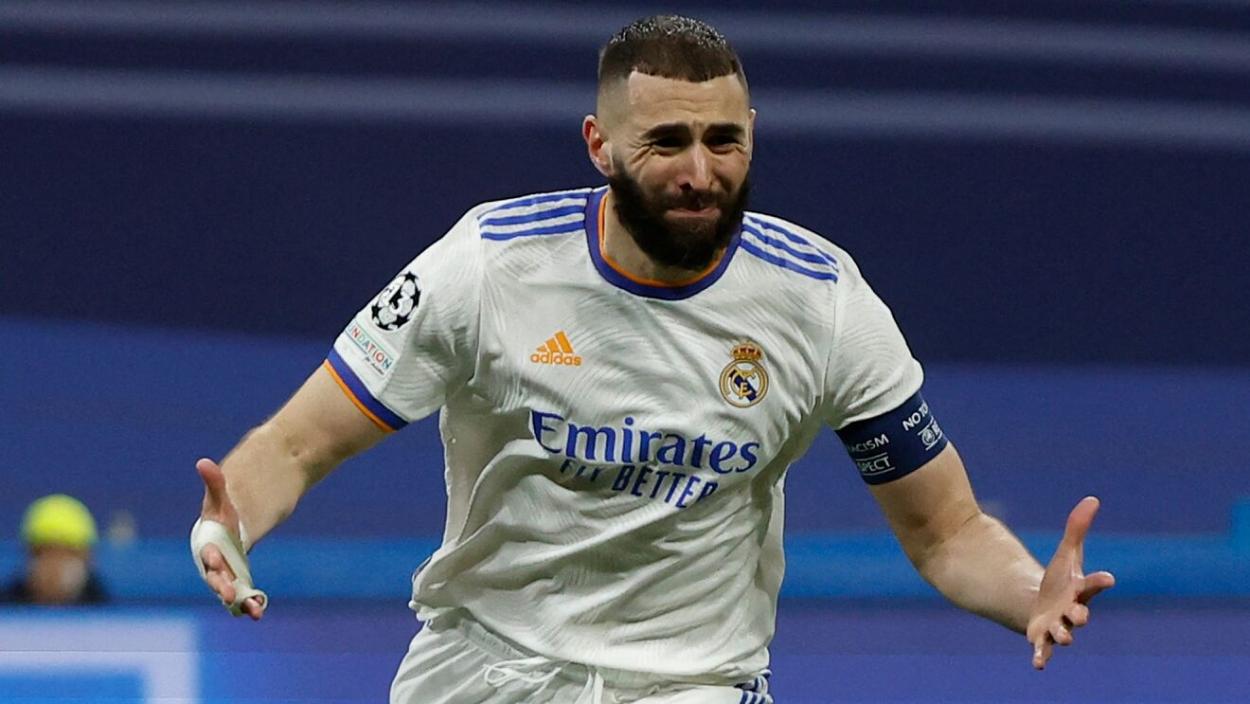 Espanyol and Real Madrid have met on a total of 183 occasions (40 wins for Espanyol, 34 draws, 109 wins for Real Madrid) where the Real Madrid squad. In terms of goals, Real Madrid has the advantage with 394 goals and Espanyol 205. Their last meeting dates back to matchday 34 of last season where Real Madrid defeated Espanyol at the Santiago Bernabeu by a score of 4-0.
1:32 PM3 months ago

The RCDE Stadium is a soccer stadium that is located in the metropolitan area of Barcelona Its first official match was against Real Madrid on September 9, 2009 with a score of 0-3. The first goal scorer was the madridista Esteban Granero.

It has a capacity for 40 500 spectators and with the possibility of a future expansion and currently holds the highest distinction of UEFA, the elite category.

One more season and with it one more competition in which Real Madrid becomes the rival to beat and the aspirant to win all the titles they dispute throughout the campaign. Real Madrid won last season's Champions League that will go down in history as the tournament of comebacks because in all the knockout rounds the Spanish team was on the verge of the knockout and in the delirium of the matches Karim Benzema and company brought out the caste and Madrid pride to turn around the conditions of the matches and in the end, as history dictates, the champion team ended up being Real Madrid who lifted the cup in Paris to a loud cry of "Hala Madrid!".
1:22 PM3 months ago

Aiming to surprise the world

Espanyol will have one of the most challenging duels just starting the season as they will receive Real Madrid at home, however, despite having a high degree of difficulty, Espanyol will try to surprise the world and get the three points in this first round. On matchday 1 they made their debut against Celta de Vigo in a 2-2 draw, and then on matchday 2 they received Rayo Vallecano, however, they could not come out on top and ended up losing 0-2 against them, obtaining the first defeat of the season, now they will seek to beat the Spanish champion and dent their crown.
1:17 PM3 months ago

Looking for a new king

The 2022-23 season kicked off in Spain, bringing back the best league in the world with it. All clubs, along with 3 new guests, will be looking to achieve great feats throughout this season that will be involved in a modified calendar due to the FIFA World Cup in November. Likewise, the teams will fight for the qualifying spots for European tournaments and to be present in the big six of LaLiga, however, the real objective is one; to be crowned as the new champions of Spain. On this date, the current champions of Spain, Real Madrid will visit Espanyol to play one more day of their local championship and get three more points in this engine start in the quest to take the Spanish crown.
1:12 PM3 months ago

The Real Madrid vs Frankfurt match will be played at RCDE Stadium, in Cornella, Spain. The kick-off is scheduled at 16:00 pm ET.
1:07 PM3 months ago