Thank you for following VAVEL live

Thank you for following Everton vs Crystal Palace on VAVEL. Keep visiting the VAVEL website to keep up to date with everything that is happening in the world of sports.
10:54 AM3 months ago

The match ends at Goodison Park, Crystal Palace falls to Everton in a well-deserved victory for the home side, who continue to climb up the table.
10:47 AM3 months ago

Goal! Everton 3, Crystal Palace 0. Dwight McNeil (Everton) left footed shot from the centre of the box.
10:42 AM3 months ago

Last 10 minutes of the match, Everton are within a whisker of sealing an important win while Crystal Palace will be looking to do the deed and tie the game.
10:35 AM3 months ago

Demarai Gray (Everton) is shown the yellow card for a bad foul.
10:28 AM3 months ago

Goal! Everton 2, Crystal Palace 0. Anthony Gordon (Everton) right footed shot from very close range to the centre of the goal.
10:21 AM3 months ago

Offside, Everton. Vitaliy Mykolenko tries a through ball, but Dominic Calvert-Lewin is caught offside.
10:21 AM3 months ago

Attempt blocked. Amadou Onana (Everton) right footed shot from outside the box is blocked.
9:51 AM3 months ago

The first half of the match is over, Everton momentarily beats Crystal Palace at Goodison Park.
9:47 AM3 months ago

Wilfried Zaha's cross looking for a finisher in Pickford's area, however, no one makes contact and the ball goes wide.
9:40 AM3 months ago

Everton gradually start to drop back further as Crystal Palace look for a move to level the scores.
9:34 AM3 months ago

Match stopped at the moment due to a strong collision between Lewin and Edouard while disputing the ball in the air.
9:21 AM3 months ago

Everton continue to press high and Crystal Palace try to change the style of play, however, the Eagles have not succeeded with it.
9:14 AM3 months ago

GOOOOOOOOOL FOR EVERTON! Goodison Park explodes, Calvert-Lewin scores the first with a great individual play and makes it 1-0.
9:10 AM3 months ago

Everton presses Palace high, Eagles looking for a counter attack
9:07 AM3 months ago

Gray tried to send a first-time cross to Iwobi but the ball went into the stands.
9:03 AM3 months ago

Everton and Crystal Palace battle it out for 3 more Premier League matchday points
8:45 AM3 months ago

In a couple of moments we will start with the broadcast of the match between Everton and Crystal Palace from Goodison Park, matchday 13 of the Premier League.
8:44 AM3 months ago

This is the starting eleven that sends Everton to Goodison Park to get three points and gradually move out of the bottom of the table. 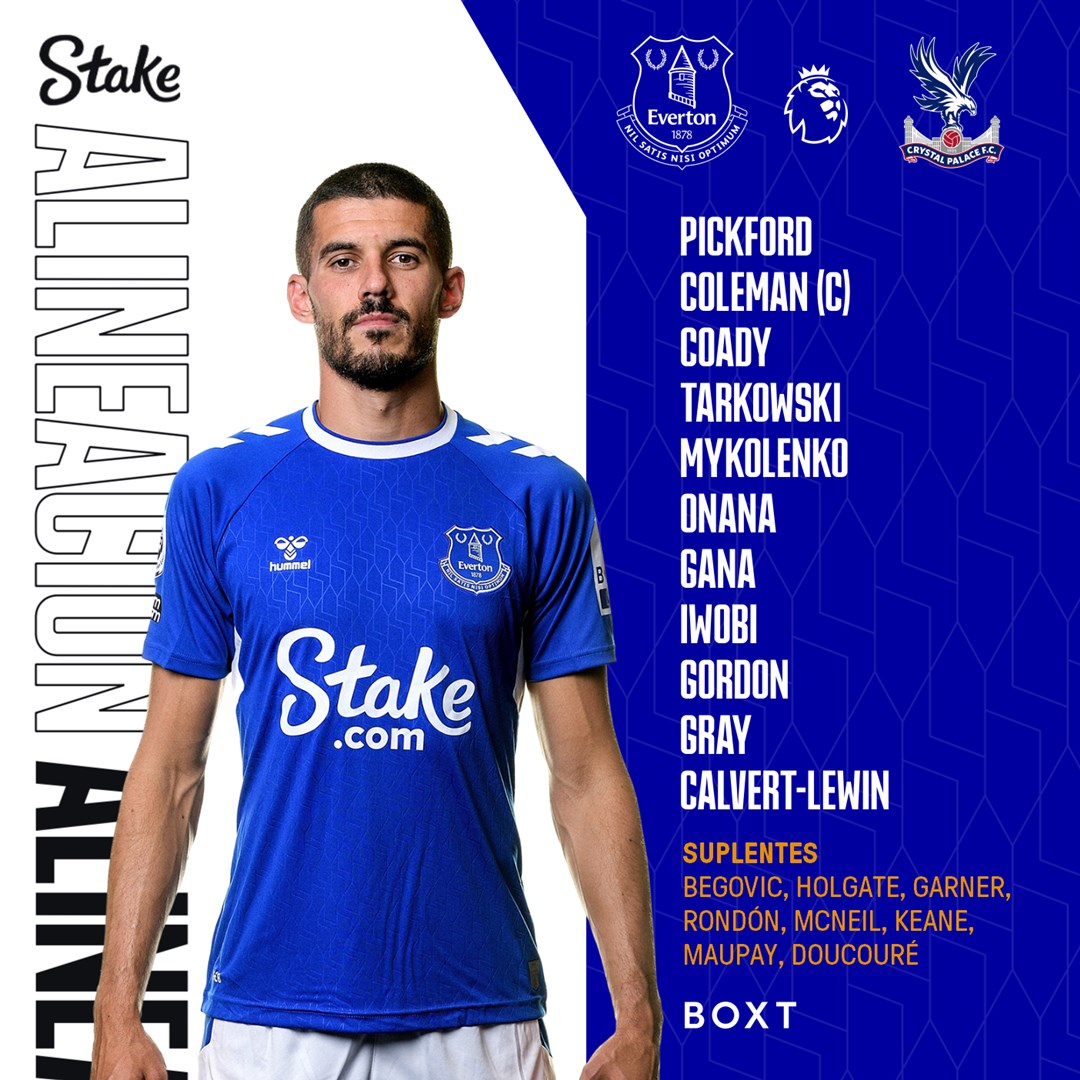 This is the starting eleven that Crystal Palace sends to the field to look for the victory at the rival's home and accompanied by their fans. 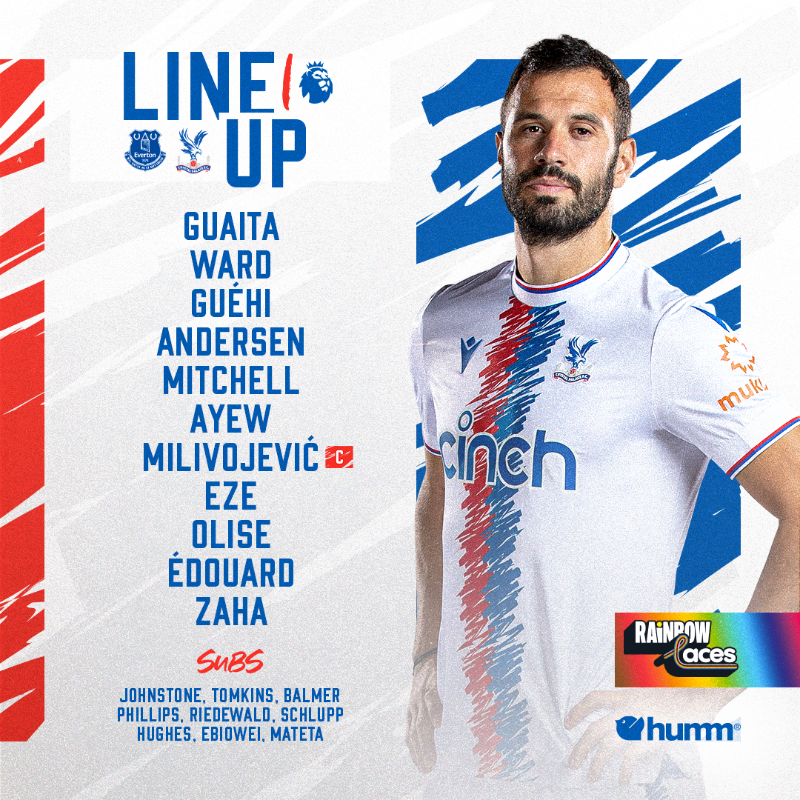 WANT A GIFT IN THE WINTER TRANSFER WINDOW

According to what was published on Thursday by the British media The Sun, Crystal Palace would be one of the teams that have taken the lead to try to sign "Big Ben".
The Chilean international, 23, is a free agent in the summer and is being monitored by several local and European clubs.
8:34 AM3 months ago

At the moment it is the player of Belgium and Manchester City, Kevin de Bruyne who has the most assists as he has 9 assists made so far this season, followed by the Portuguese Bernardo Silva of the same team with 4 assists made and Bukayo Saka of Arsenal, in third place are Alex Iwobi of Everton, Dejan Kulusevski of Tottenham, Erling Haaland, Gabriel Jesus of Arsenal, and Xhaka with 3 assists made.
8:29 AM3 months ago

After 11 games played, Manchester City's star striker, Halaand, dominates the scoring table with 15 goals in his personal account, having a great advantage over the rest of the strikers. In second place is Tottenham's Harry Kane with 7 goals on his personal tally, followed by Fulham's Aleksandar Mitrovic, Arsenal's Gabriel Jesus, Brentford's Ivan Toney, Leicester City's James Maddison, Manchester City's Phil Foden and Liverpool's Roberto Firminio with 6 goals so far.
8:24 AM3 months ago

On the other hand, Everton continues to fare poorly so far this season as they have not managed to get out of the bottom of the overall table. In the last matchday Everton faced Newcastle United at St James' Park, however, the bad streak continued for the Liverpool natives as they lost by the minimum difference in the match and lost again the opportunity to get three points.
8:19 AM3 months ago

Last matchday, Crystal Palace faced Wolverhampton at Selhurts Park Stadium for three more Premier League points. The Eagles' team had the mission to win the game in order to keep moving up in the general table, however, the Wolves' team wanted to win the three points to get out of the relegation zone. The match was very even in the first few minutes, but Crystal Palace gradually began to dominate the game, closing with a final score of 2-1 that earned them points in the overall standings.
8:14 AM3 months ago

The wait is over, the Premier League continues in England with the start of the double-header to continue living any amount of emotions of the 22-23 season before the break for the World Cup in Qatar in November. On this date, the Everton team will receive Crystal Palace at Goodison Park to play one more Premier League duel, the Eagles have been gradually climbing positions in England but want to aspire more this season, on the other hand, Everton will seek to win to get out of the relegation zone and avoid being in the relegation zone.
8:09 AM3 months ago

Do not miss a detail of the match with the live updates and commentaries of VAVEL. Follow along with us all the details, commentaries, analysis and lineups for this Everton vs Crystal Palace match.
8:04 AM3 months ago

What time is Everton vs Crystal Palace for Premier League match?

This is the start time of the game Everton vs Crystal Palace of 22th October in several countries:

Watch out for this Everton player: 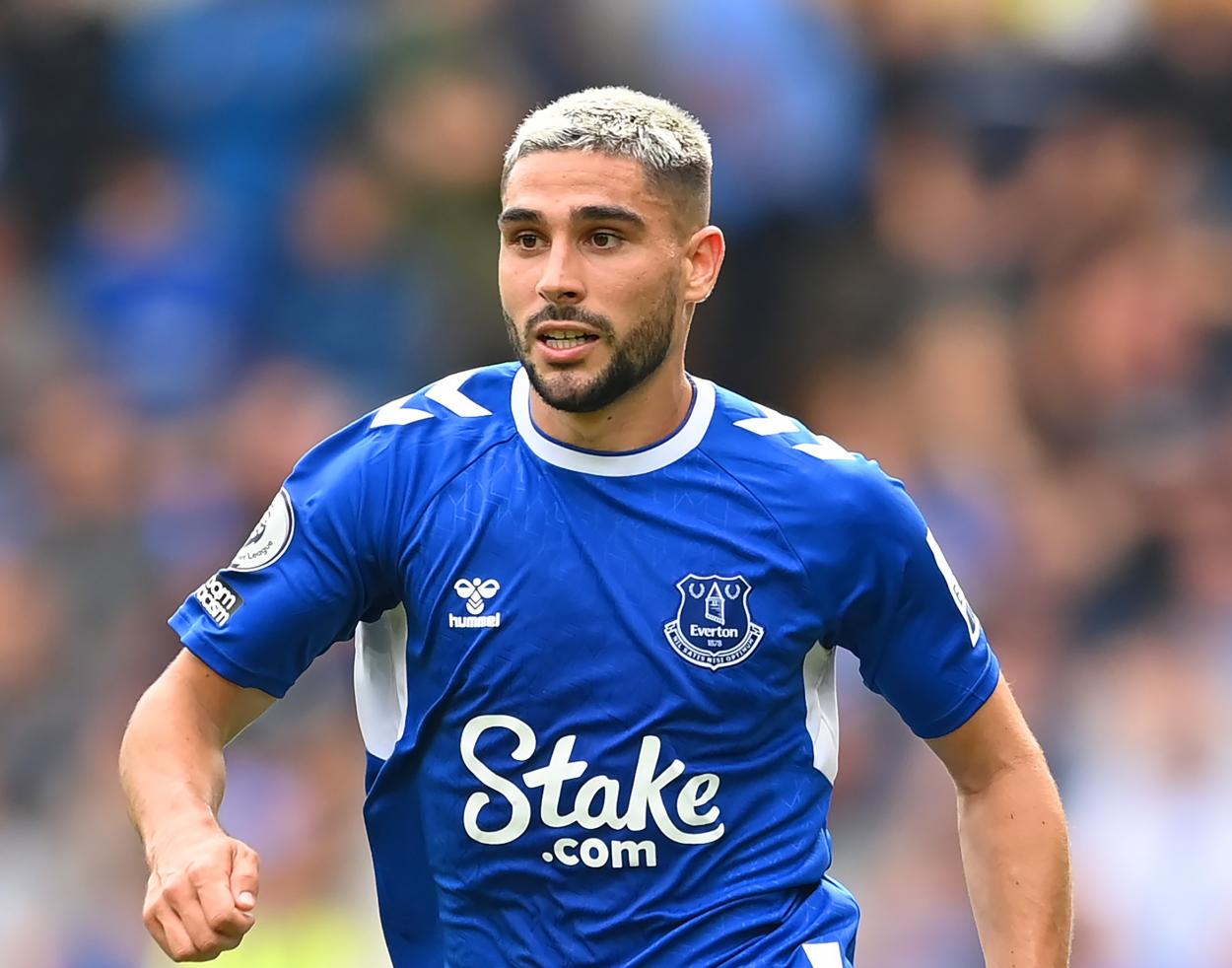 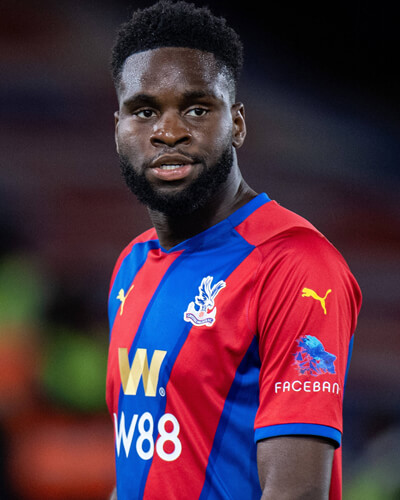 For this match, the player to follow will be Odsonne Edouard, the French center forward is known to be a real killer in the Premier League and a reference to the attack with the Crystal Palace team, so he will be the player to follow throughout the match.
7:44 AM3 months ago

Everton and Crystal Palace have met on a total of 55 occasions (23 wins for Everton, 19 draws and 13 wins for Crystal Palace) where the scales are slightly tipped in favor of the home side. In terms of goals, both teams tend to score against each other, with 94 goals for the home side and 64 for the visitors. Their last meeting dates back to matchday 33 of last season where Everton won at Goodison Park 3-2 against Crystal Palace.
7:29 AM3 months ago

Goodison Park is a soccer stadium located in the city of Liverpool and is intended for the practice of professional soccer, it is currently the home of Everton Football Club, a team that belongs to the First Division of England or better known Premier League. It has a capacity for 39,000 spectators and is one of the oldest stadiums in the country.

More top flight soccer matches have been played at Goodison Park than at any other stadium in the United Kingdom and it was the only English club stadium to host a 1966 World Cup semi-final.

Little by little they want to get back on track

The Everton team has had a difficult season in the Premier League, however, little by little they are trying to get back on track and get out of the danger zone this season. At the moment Everton is in 15th place overall with 11 games played that have resulted in 2 wins, 4 draws and 5 defeats, collecting a total of 10 points. Likewise, in the statistics they have a total of 8 goals for and 12 against, leaving a -4 goal difference. Last match they faced Newcastle United and lost by the minimum difference.
7:19 AM3 months ago

Winning on the road

The Crystal Palace team faced Wolverhampton last matchday, the Palace team was able to impose itself against the Wolves and ended up winning 2-1 to take 3 points last matchday. At the moment, the Crystal Palace team is in the 10th position with 10 games played that have been the product of 3 wins, 4 draws and 3 defeats that have given them a total of 13 points. In the statistics they average a total of 12 goals for and 13 against, leaving them with a negative goal difference of -1 goal difference.
7:14 AM3 months ago

Halfway through the Premier League season

The 2022-23 season has reached its halfway point in England still being the best league in the world due to the high level presented by most of the clubs that have participated in these rounds. All clubs, along with 3 new guests, will be looking to achieve great feats throughout this season that will be involved in a modified calendar due to the FIFA World Cup in November. Likewise, the teams will fight for the qualifying places for European tournaments and to be present in the big six of the Premier League, however, the real objective is one; to be crowned as the new champions of England. In this matchday, Everton and Crystal Palace will face each other at Goodison Park to define the winner of the three points, both teams are in the mid-table zone of the Premier League and are looking to continue moving up positions this season, so it will be important to get the three points in this duel.
7:09 AM3 months ago

The Everton vs Crystal Palace match will be played at Goodison Park, in Liverpool, England. The kick-off is scheduled at 10:00 am ET.
7:04 AM3 months ago

Welcome to VAVEL.com’s LIVE coverage of the 2022 Premier League: Everton vs Crystal Palace!