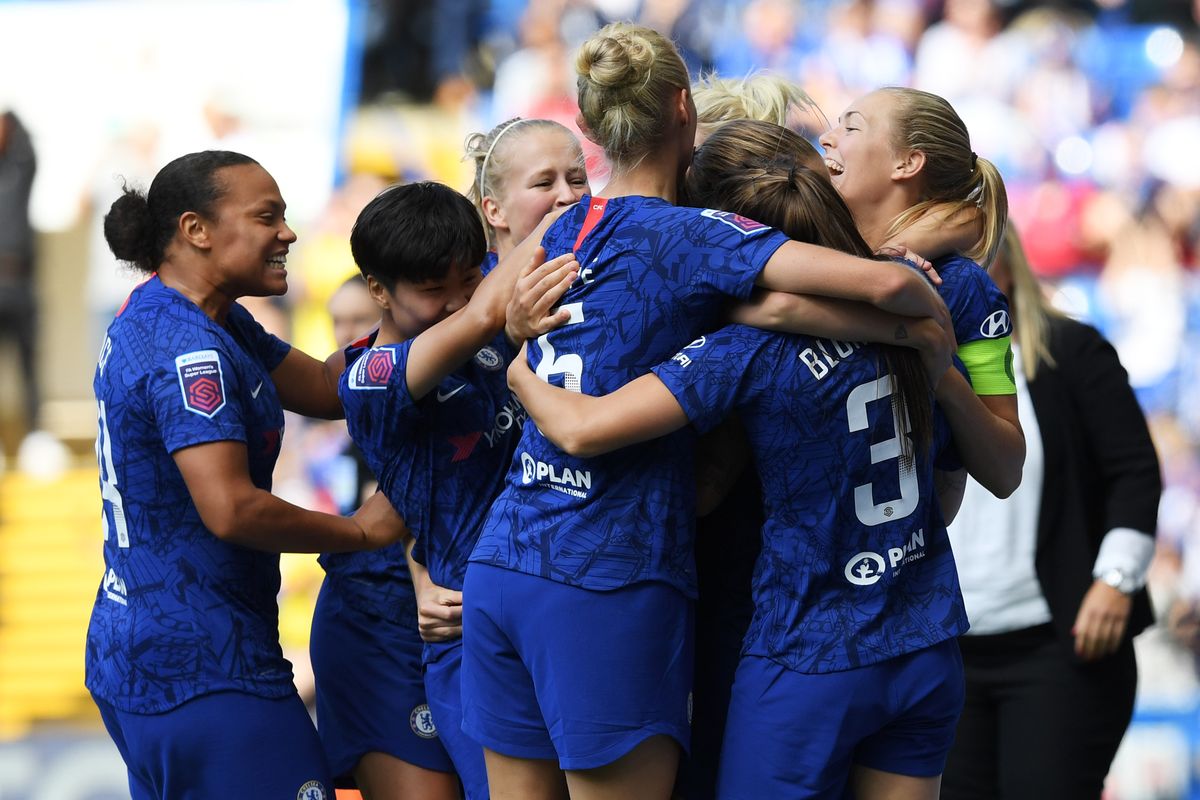 Chelsea Women are a professional women’s football club who compete in the FA Women’s Super League - the top division of female football in England. They are managed by Emma Hayes and are one of the most successful teams in the Women’s game in the nation. Since 2004, Chelsea Women has been affiliated with the men’s side Chelsea FC who play in the Premier League

Chelsea Ladies Football Club was formed in 1992 after supporters of Chelsea FC expressed a desire for the club to have a women’s side. In June of 2004, Chelsea Ladies voted to be taken over by Chelsea’s ‘Football in the community’ department. In 2004, the club won promotion from the Southern Division of the FAWPL to the National Division and have stayed in the top flight since.

In their first season in the National Division, Chelsea’s season was underwhelming to say the least. With one point from their first six games, manager George Michealas was fired in September after four years in charge. They finished rock bottom under Shaun Gore, but won a promotion/relegation playoff against Northern Division side Liverpool to stay up.

They finished eighth the year after, and in preparation for the 2007/08 season, manager Gore signed England stars Siobhan Chamberlain, Casey Stoney, and youngster Eniola Aluko who had previously impressed and reached the FA Cup final with Charlton. Aluko would depart two years later, but came back during the WSL period and forge herself as a Chelsea legend.

For 2008/09, Chelsea introduced former Arsenal Ladies reserve manager Steve Jones to the helm, and signed Lianne Sanderson, Anita Asante and Mary Phillip from their London rivals. Chelsea finished third that year behind the gunners and Everton. Mary Phillips retired only one month into the season, and Anita Asante and Eni Aluko departed for the new American league the WPS - the latter taking the opportunity to couple this with a career as a lawyer. Jones departed in 2009, leaving Casey Stoney as player/manager.

Stoney recommended Matt Beard and he became manager for 2009/10. The club suffered financial difficulties and a lack of funding, but men’s side star John Terry as well as other players gave the club financial assistance.

In March of 2011, Chelsea were granted permission to play in the Women’s Super League and became one of the eight founding members in the first season. Matt Beard led the club to an FA Cup Final against Birmingham City held at Ashton Gate Stadium. The match ended in a 2-2 draw, but the opposition from the midlands were victorious on penalties in front of 8,273 supporters. The winning penalty was scored by Birmingham midfielder Karen Carney, who would go on to represent Chelsea after a lucrative move in 2015 and become one of the major players for the England national team. In the summer of that year, Beard resigned after three years and made way for Emma Hayes’ era at Chelsea to begin.

Chelsea finished sixth out of the eight teams in the 2012 Women’s Super League, nine points off qualification to the UEFA Women’s Champions League. The year after was also not a successful one for Emma Hayes’ side, they finished seventh and were only a narrow four points off the drop to the WSL 2.

The 2014 season was much better. Chelsea finished second in the division, narrowly missing out on the title by goal difference. They could have clinched the trophy on the final day, but they lost 2-1 against Manchester City. This second-place finish also awarded them qualification for the UWCL as well as them getting to semi-finals of both the FA and Continental Cup.

In 2015, Chelsea had an incredible season. In August, Emma Hayes’ squad won the first Women’s FA Cup final that was hosted at Wembley Stadium - a single goal from forward Eniola Aluka the difference between them and opposition Notts County. Three months later in October, after a 4-0 win versus Sunderland Ladies, they also picked up their first Women’s Super League trophy and secured a first League and Cup double. In the UWCL, Chelsea beat Glasgow City 4-0 in the first round before going out to eventual winners VfL Wolfsburg in the Round of 16.

They finished second in the 2016 campaign and qualified for the UWCL. They once again met the German giants, this time in the round of 32, and were knocked out.

With the WSL making the move from a summer to winter season to fall in line with the men’s game, a ‘Spring series’ of the WSL was played. Chelsea were victorious in this spring series, and they earned the title on goal difference, on the same number of points as Manchester City but having an 18 goal margin ahead of them.

Now in a summer campaign, Chelsea repeated the double. The 17/18 campaign was the first before the league became fully professional, but the fact that the blues’ side was already mostly full time and had access to the Cobham training facilities gave them the advantage. They won the WSL by a comfortable six-point margin and were victorious in the FA Cup final against Everton in front of over 45,000 spectators, Emma Hayes’ squad 3-1 winners in a game that was broadcast live to the nation on BBC 1. As well as this, in Europe, they defeated Bayern Munich, Rosengard and Montpellier before once again falling to VfL Wolfsburg, this time in the semi-finals.

Ahead of the move to a professional WSL, Chelsea made the decision to make a progressive name change and shift from being Chelsea Ladies to Chelsea FC Women. Their European fortunes were similar - they set aside SFK 2000, Fiorentina and PSG before losing out in the semi-finals to Olympique Lyon. Arsenal won the WSL, and Chelsea missed out on UWCL qualification for the first time since the 2014 campaign.

In 2019, Chelsea became only the third side in history to lift the Continental Cup, 2-1 victors thanks to a brace from Bethany England. Before the pause in the season due to the international COVID-19 outbreak, Chelsea sat second in the division but one point behind Manchester City with a game in hand. It is yet to be seen how the season will be decided

Chelsea Women play at Kingsmeadow Stadium in Kingston-upon-Thames, which they share with EFL League One side AFC Wimbledon. It holds 4,850, with 2,265 of that as seated sections of the ground.

In 2016, Chelsea signed a deal with The Dons Trust, owners of AFC Wimbledon, to purchase the ground for a fee that was reported to be £2 million. One of the Dons’ main aims since their formation after the original club became MK Dons was to move to Plough Lane, their old stadium. This looks like it will become a reality and Wimbledon are set to move there for the 2020/21 season.

Kingsmeadow in its current state may not be at the level of places such as The Academy Stadium in terms of what a modern football ground can be, but it compensates that with the character that it has. It lacks mod-cons, but the noise from the fans on the terraces at the ground is brilliant, and Champions League nights at Chelsea are among some of the best in Women’s Football.

In the 2019/20 Women’s Super League, Kingsmeadow has been one of the best stadia in the division for attendances. With averages bolstered for many by games played at men’s’ grounds, their game against Arsenal in October of 2019 has 4,149 fans, with many travelling to the return leg later on in the season.