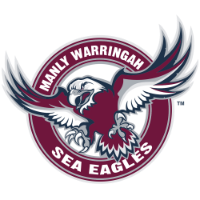 The Manly Warringah Sea Eagles are a professional Australian Rugby League team who are named after the Manly and Warringah areas of Sydney’s Northern Beaches in which the club is based. They currently compete in the National Rugby League’s (NRL’s) Telestra Premiership, the top division of Rugby League in Australia and New Zealand. They were founded in 1946 and currently play their home games out of the Brookvale Oval in Sydney. The Sea Eagles are the current record holders of going the longest time without a wooden spoon, over 70 years since their founding. The Sea Eagles entered into a joint venture with the North Sydney Bears to form the Northern Eagles at the end of 1999 before the joint venture collapsed in 2002. Manly were readmitted as the current club in 2003.

In 1947, the New South Wales Rugby League (NSWRL) accepted Manly’s application to join the division and along with the Paramatta Eels, they were granted admission to the 1947 competition.

Their first premiership game was played against Western Suburbs at the Brookvale Oval on Saturday 12 April 1947. Their first win came against the Parramatta Eels and the club finished their first-ever season in second-last place.

Manly appeared in their first grand final in the 1951 season, which they lost to the South Sydney Rabbitohs. Manly Warringah played in the Grand Final on five occasions before winning their first premiership in 1972. The following year, they won again. They did the same again in 1976 and 1978. The grand final in 1973 is reputed by many to be one of the hardest and toughest grand finals ever played, at least in the televised era.

Manly were a powerful side in the early 80s but were beaten in two consecutive Grand finals by Parramatta, in 1982 and 1983. They won their next premiership in 1987 against the Canberra Raiders in the last ever Grand Final to be played at the Sydney Cricket Ground. They returned to the playoffs in 1993 and 1994 but were beaten on each occasion in the first elimination semi-final by the Brisbane Broncos.

In 1988 Manly beat a touring Great Britain Lions side 30-0 at the Brookvale Oval.

In 1995, Manly reached the Grand Final again, but in one of the league’s biggest upsets, were defeated by Canterbury Bulldogs.

In 1996, Manly made another appearance in the Grand Finals and beat St George Illawarra Dragons to win the title. In 1997, Manly were one of the leading teams in the breakaway ARL competition.

At the turn of the Millenium, Manly Warringah merged with the North Sydney Bears to become the Northern Eagles in a venture that would run between 2000 and 2002.

Sharing home games between the Brookvale Oval and the Central Coast Stadium, little success was had during these three seasons, with the club finishing 12th, 10th and 9th

The joint venture collapsed in 2002 and Manly retained the Northern Eagles license for the 2002 season until returning to the competition as the Manly Warringah Sea Eagles for the 200e season.

The club produced few moments of joy in the 2003 and 2004 seasons before reaching their first semi-finals in seven years in 2005.

After a second-placed finish, Manly reached their fifteenth grand final against Melbourne. They were beaten 34-8 by the storm at the Telstra Stadium, although Melbourne would later be stripped of their title for salary cap breaches.

Manly finished second in the division on points difference, missing out on claiming their first minor premiership in over a decade.

They reached the grand final against Melbourne, and the story was very different to the previous year. They decimated the Storm 40-0 to win their seventh premiership in front of 80,038 at the ANZ stadium.

After a season where off-field controversy took the focus in the media, Manly finished fifth and lost the first qualifying final to eventual winners Melbourne. This premiership was also stripped from the storm.

In 2010, Manly finished eighth in the division due to the Melbourne Storm salary cap breach, although they did represent much of a challenge in the finals, mainly due to a large number of injuries in their squad.

In 2011, the Sea Eagles returned to their former successes. After beating the NQ Cowboys and the Brisbane Broncos in the playoffs, they defeated New Zealand Warriors in the final to secure their eighth premiership in the club’s history.

In 2012, Manly-Warringah ended the regular season in 4th-place on the ladder, although they lost to eventual premiers Melbourne Storm in the playoffs.

Although they did not manage to win a grand final in the 2013 season, the Sea Eagles played some very good football and battled their way into the playoffs, proving their position as one of the NRL’s top clubs.

The Sea Eagles bowed out of the finals series in the second week of the 2014 campaign, although they relinquished their grip on the minor premiership.

In 2015, manly struggled to maintain the previous consistency which they produced over the past decade and although they were last going into round 17, they ended the season finishing ninth.

The 2016 season was another poor one for the Sea Eagles, and they finished the regular season in 13th position, recording only eight wins.

Manly made the finals series after a 6th-place finish in the regular season, although they lost in the first week to Penrith Panthers.

2018 was another horror year for the sea eagles. They finished in 15th place and only just missed out on picking up their first-ever wooden spoon.

2019 was much better than the previous year, and Manly finished the regular six season in sixth place. However, they bowed out of the finals in the second week when they were defeated by South Sydney 34-26 in the elimination final at the ANZ Stadium.