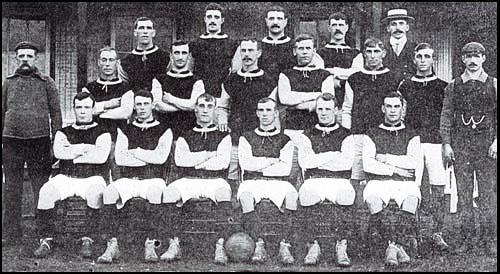 West Ham United FC are a side based in London, England, that currently plays in the Premier League, the top tier of English football. They play their home games at London Stadium after moving from Boleyn Ground, also known as Upton Park, where "The Hammers" have played since 1904. they share local rivalries with Tottenham Hotspur, Millwall FC and Chelsea FC.

West Ham United were formed in 1845 under the name "Thames Ironworks" before reforming as "West Ham United" in 1900. The team initially competed in the Southern League and Western League before joining the Football League in 1919. They were promoted to the top flight in 1923, the same year they've become the first losing finalists in the first FA Cup Final held at Wembley, losing 2-0 against Bolton Wanderers.

The turn of the decade into the ‘60s brought Leeds most successful period to date. In 1961, the club appointed Ron Greenwood as first-team manager and soon led the club to two major trophies.

In 1964, a team led by Bobby Moore won the clubs first FA Cup in history, beating Preston North End three goals to two. It was later followed by Cup Winners' Cup victory over 1860 Munich in 1965.

During the 1966 FIFA World Cup, key members of the tournament winning England squad were West Ham players - the captain, Bobby Moore; Martin Peters; and Geoff Hurst, who scored the first and the only hat-trick in history in a men's World Cup final.

After 10 years of no success, the Hammers returned to glory under now new manager, John Lyall, winning the 1975 FA Cup final against ex-West Ham's Bobby Moore, now playing for Fulham FC. Lyall then guided West Ham to another European Cup Winners' Cup final in 1976, unfortunately, losing the match 4–2 to Belgian side RSC Anderlecht.

In 1978, West Ham were again relegated to Division Two, but Lyall was retained as manager and led the team to an FA Cup Final win against Arsenal in 1980, which was their last major honour. The Hammers won 1–0, with a goal scored from a header by Trevor Brooking in the 13th minute. This is notable as no team outside the top division has won the trophy since.

In 1981 West Ham were promoted back to Division One, and finished in the top ten of the first division for the next three seasons before achieving their highest-ever league finish in 1985–86 when they came third. Unfortunately, they suffered relegation again in 1989, which resulted in Lyall's sacking, ending his 34-year service at the club. Next season they were already back in the top division.

But just after one, spoiled with controversy and crowd unrest year, the Hammers were back in the lower division, although managed to bounce back in style and fight through instant promotion.

On 10th of August 1994, Harry Redknapp has been appointed as the first-team manager after Billy Bonds' resignation. His time at West Ham was notable for the level of high-quality signings, attractive football and success. Rio Ferdinand, Frank Lampard, Glen Johnson, Stuart Pearce, Trevor Sinclair, Paolo Di Canio, John Hartson, Eyal Berkovic and Ian Wright are only a few names which passed through the club during Redknapp's reign.

In 1999, West Ham finished fifth in the Premier League, their highest league position in the top-tier since 1986. The same year they've also won the Intertoto Cup, beating French club Metz in the final, by which they've qualified for the 1999–2000 UEFA Cup, but with no latter success.

In June 2001 Redknapp was fired and replaced by Glenn Roeder. Unfortunately, the move didn't pay off as in his second season the Hammers went back down to the second-tier. They were relegated on the last day of the season, setting the point record for a relegated club of 42 points from a 38-game season. Following the relegation, many top players including Joe Cole, Paolo Di Canio and Frederic Kanoute all left the club.

After the sacking of Roeder in August 2003, Alan Pardew was named the first-team manager after joining from Reading FC, and in his first season in charge, he guided West Ham to the playoff final only to lose to his former side, Crystal Palace. The signings of Bobby Zamora, Matthew Etherington, Chris Powell and legend Teddy Sheringham saw the Hammers finish sixth and beat Preston North End 1–0 thanks to a Zamora goal in the 2005 playoff final, securing a return to the Premier League.

On their return to the top division, West Ham finished ninth. The highlight of the 2005–06 season, however, was reaching the FA Cup final and taking favourites Liverpool to a penalty shootout, only to lose after a 3–3 draw which was rescued by a very late Steven Gerrard volley from over 30-yards-out. In August 2006, West Ham completed a major coup on the last day of the transfer window after completing the signings of Carlos Tevez and Javier Mascherano, which were later investigated by the Premier League. The club was found guilty and fined £5.5 million in April 2007

Manager Alan Pardew was sacked after poor form during the season and was replaced by Alan Curbishley, previously linked with the job. But he resigned after just one season in charge, after a row with the board, and had been succeeded by former Chelsea FC striker, Gianfranco Zola, under whom the Hammers finished 9th in his first season in charge, but barely escaping relegation in the second, which followed with the sacking of the Italian.

And that brought West Ham to sign Avram Grant, under which the Hammers looked absolutely awful and subsequently got relegated, despite Scott Parker, the team's captain, winning the FWA Footballer Of The Year award. On 1 June 2011, Sam Allardyce was appointed as manager as Grant's replacement.

In the 2011–12 FL Championship season the Hammers finished third with 86 points and took part in the play-offs, beating Cardiff City in the play-off semi-final 5–0 on aggregate to reach the final against Blackpool at Wembley on 19 May 2012. Carlton Cole opened the scoring, and although Blackpool equalised early in the second half, Ricardo Vaz Tê scored the winner for West Ham in the 87th minute.

On 9 June 2015, former West Ham player Slaven Bilić was appointed as manager on a three-year contract. In Bilić's fourth game in charge, the team won at Anfield for the first time in 52 years, beating Liverpool 0–3. At the end of the season, West Ham finished 7th in the Premier League. The team broke several club records in the Premier League era, including the highest number of points (62), the highest number of goals in a season (65), the fewest number of games lost in a season (8) and the lowest number of away defeats (5). The season also marked the last season where the team played at the Boleyn Ground, with them moving to the London Stadium from next season - ending their 112-year stay at the stadium.

Thanks to Manchester United's FA Cup final win in 2016, West Ham took their Europa League place and qualified for the 2016–17 edition, only to lose to a Romanian outfit Astra Giurgiu for the second year in a row, which was later followed by the departure of their best player in years, Dimitri Payet, in January 2017.

But with the team threatened by relegation, Bilić was sacked on 6 November 2017. He was replaced by former Everton and Manchester United boss David Moyes on a contract till the end of the season. The team managed to avoid relegation and finish 13th, but Moyes was not offered a new contract and left the club on 16 May 2018.

On 22 May 2018, the club appointed former Premier League winner with Manchester City and Real Madrid boss Manuel Pellegrini as the new manager on a three-year contract. In his first season in charge, the Hammers finished 10th. But after a very poor start to the following season, Pellegrini was sacked in December 2019 leaving the team only one point above the relegation zone. The Chilean was replaced by David Moyes, who returned to the club for a second spell in charge.