Back in February, Sunderland U21's drew with Manchester United's in a far from spectacular match.

However, though the game wasn't exactly the most enthralling, some of the young talent on show was a joy to watch. The visitors boasted names such as James Wilson, Andres Pereira and Tyler Blackett, whilst Sunderland had their own talent in the form of Mikael Mandron. But it wasn't until the hour mark that we saw the real star of the show.

Youngster Duncan Watmore came on with half an hour remaining and sparked a dull game into life. He attacked the United defence and was always looking dangerous. That night, it was clear that the boy has ability.

Since that night, Watmore has go on to win the Barclays Under 21 Player of the Season award and make a handful of first team appearances in the league this year. He has scored against Exeter City in the League Cup and Norwich City in the league and is beginning to look like a shoe in, in the Black Cats first team.

What Sunderland Have Been Lacking 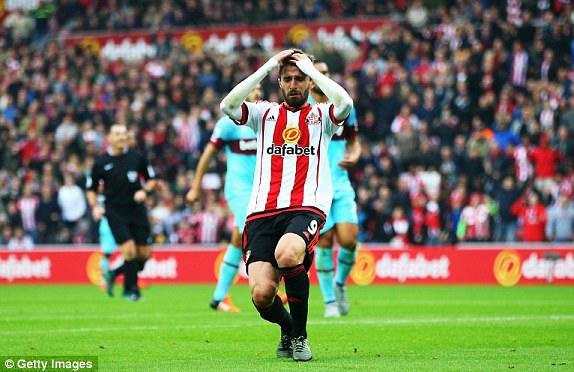 Sunderland sit in 19th place in the league and have been far from impressive this season. Even the derby victory over Newcastle United was something of a snatch and grab victory. But their is hope that the international break will give Allarydce time to gel his side together for the must-win games against Crystal Palace and Stoke City.

Jermain Defoe and Steven Fletcher have seven league goals between them this campaign, but they still haven't found the net as much as fans would have hoped. Fellow strikers Danny Graham and Fabio Borini haven't found the net at all this season. Is the service good enough from the midfield? Well when you see that Adam Johnson, Yann M'Vila, Jeremain Lens and Ola Toivonen are all tied at the top of the assist league with a whopping one assist each, I think we have the answer.

More goals from midfield would also be handy. Lens has been on the scoresheet twice this season and attacking midfielder Toivonen has also netted once, but this is nowhere near enough if Sunderland want to start climbing up the table.

Who Will Lose Their Place?

Watmore can play down either flank, behind the centre forward or even as a striker. His versatility means he can fill in for any attacking absentee.

He holds bags of pace, meaning he can be a fantastic impact player when coming off the bench, but Big Sam should be looking towards embedding him firmly in the starting XI of this uninspiring side. Give him the ball at his feet and he will run at defenders, be adventurous and have a go. Someone to get fans off their seats at the Stadium of Light.

But who will become a casualty of the team rotation? Well there may indeed be a few squad members that are panicking.

Sunderland's midfield line isn't exactly full of spring chickens, is it? Sebastian Larsson, who has been a fan favourite over the years, is now 30. Jordi Gomez and forgotten man, Emanuele Giaccherini are also 30. New signing Toivenen is a ripe 29 years of age, and derby hero, Johnson is approaching his thirties. These ages are said to be the peak age for a footballer, but these lads aren't lending much weight to that suggestion.

But it isn't just age that will force players to be axed. Young players like Jack Rodwell haven't lived up to their potential and could soon find themselves being moved on at a cut price. Liam Bridcutt and Will Buckley were both brought in by Gus Poyet and have failed to shine for the club on a consistent basis. With those players both in their mid-twenties, they could also be easily replaced.

Why Watmore Can Provoke A Change Off The Pitch

Everyone knows the impact the young lad can have on the field, but off the pitch the promotion of Watmore to the first team can spell a new era for Sunderland.

It could potentially change the way the Black Cats' hierarchy go about their transfers and persuade them to focus on homegrown, youthful talent.

It's fair to say that over the past few years, Sunderland signings haven't always lived up to expectations.

Take Charalampos Mavrias for example. "Who?!", I hear you cry. Well, Mavrias was purchased in 2013 for £2 million pounds at the age of 19. Two years down the line and four appearances later, he appears to be heading straight back to Greece. He is the prime example of poor scouting by Sunderland.

Other examples include previously mentioned duo, Buckley and Bridcutt. Two young talents that were brought in from elsewhere and did not perform. Those two places in the side could have been filled from equally good Sunderland youth players who just need a chance taken on them.

Watmore is the perfect example why looking closer to home isn't always a bad thing. Though Watmore was purchased from Altrincham, it wasn't an astronomical fee or a foreign gamble, and the Black Cats have contributed heavily to his development as a youngster since.

The North East right now is crying out for some good talent and an upturn in fortune. Young academy products need to be given the opportunity to shine on the big stage, otherwise what is the point of pumping all the money into youth systems?

Going back to the Under 21 game mentioned at the start, there is definitely talent there. Sunderland have prospects such as Lynden Gooch, George Honeyman and Mandron all ready to get their shot, so let them have it - not just Watmore.

Swindon Town 0-2 Sunderland: Wyke and Maguire goals get the job done 5 months ago