Middlesbrough have today announced that the Nunthorpe-born centre half, Ben Gibson, has signed a new contract with the North East outfit.

Gibson, who made his Boro debut in 2011 under former Middlesbrough centre-back-turned-manager Tony Mowbray, has put pen to paper on a 5-year contract.

Over the past two seasons, Aitor Karanka's Middlesbrough has been renowned for the strength of it's backline. One main feature of Karanka's rear guard has been Boro's own Ben Gibson.

After Karanka took over from Tony Mowbray in 2013, he has been focussing on keeping Middlesbrough tight at the back and Gibson has featured in his back line ever since former Boro captain Rhys Williams sustained a long term injury in January 2014.

Gibson was also part of the Boro back four that went 11 games without conceading a goal around the turn of the year last season. Gibson is the latest of that back line to extend his stay with Middlesbrough.

Daniel Ayala signed his new contract on August 6th and this was quickly followed by Boro vice captain George Friend signing until 2020. And now with Ben Gibson staying on Teesside, a strong foundation is being layed for Boro's future. 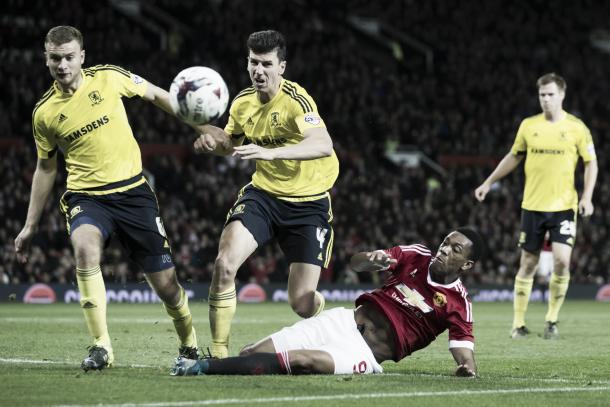 Gibson told MFC.co.uk, "I'm over the moon... It's a dream come true for me and it's amazing for me and my family."

“I just want to make sure the next five years are in the Premier League with this club."