Thank you and goodbye!

That’s it for VAVEL UK’s live text commentary on this Premier League match between Crystal Palace and Southampton— we hope you enjoyed it.

Stay tuned on the site for more live text commentaries and further analysis and reaction to all top flight matches this weekend.

Wilfried Zaha's opener in the 13th minute was the difference here at Selhurst Park. Southampton had their chances and a superb Vicente Guaita save in the burning embers of the match kept Palace's three points intact.

In the league, Palace next up against Manchester United, whereas Southampton will be up against Spurs.

WOW! A match wining save from Vicente Guaita to deny Long!
16:546 months ago

Zaha should have scored, had all the time in the world but could only find the side netting!
16:526 months ago

Palace are trying to hold out, holding the ball up by the corner flag.
16:496 months ago

There will be SIX minutes of added time!
16:486 months ago

Free kick to Palace after a handball from Vestergaard.
16:456 months ago

There are only five minutes of normal time remaining, can Palace hold on, or will Southampton snatch a point from Selhurst Park?
16:456 months ago

Palace have the ball in the back of the net, courtesy of Zaha but it has been flagged for offside.
16:406 months ago

Palace corner. Whipped in by Milivojevic, McArthur won the header but failed to direct it on target.
16:386 months ago

Off comes Will Smallbone for Djenepo. 15 minutes left to play.
16:356 months ago

Milivojevic whips in a free kick. Ayew has a free header and can only direct it straight at McCarthy.
16:336 months ago

Over the bar from the England international.
16:326 months ago

Free kick for Southampton. Ward-Prowse to take.
16:326 months ago

68' Off comes James McCarthy, on comes Luka Milivojevic.
16:276 months ago

Adams goes down in the box under pressure from Kouyate, VAR checks, but no penalty. Palace's lead living a very charmed life this half.
16:236 months ago

A rare Palace attack. Schlupp plays a tantalising ball across the face of goal, it was just ahead of Ayew and Vestergaard clears.
16:206 months ago

Walker-Peters has had a lot of joy down the right hand side today. Looks extremely dangerous going forward.
16:176 months ago

James McCarthy booked for a foul on Ward-Prowse.
16:136 months ago

What a save from Guaita! He keeps out Che Adams from close range.
16:116 months ago

Walker-Peters has had his red card rescinded, he has been shown a yellow card.
16:106 months ago

No surprise it has gone to the powers that be. John Moss will make his way to the monitor.
16:096 months ago

Walker-Peters drives a ball across the face of goal, however, no Saints player was found gambling for the cross.
16:066 months ago

Close from Redmond! A lot better from Southampton, Vestergaard switched the play to Smallbone, who found Remond but his shot was straight at Guaita.
16:026 months ago

Vestergaard is coming on at the back, prehaps for Stephens, who was injury early on in the first half.
15:506 months ago

Palace lead at the break. Wilfried Zaha's 50th league goal for the Eagles the difference so far. Southampton have been rather quiet in front of goal, the low-block of Palace's defence is proving difficult for Southampton to break.
15:476 months ago

There will be two minutes of added time!
15:476 months ago

Corner for Southampton, cleared by Scott Dann.
15:436 months ago

Schlupp booked for a foul on Ward-Prowse.
15:436 months ago

Smallbone went down in the box but referee, Jonathan Moss, waved play on.
15:416 months ago

Southampton have had 70% possession, but thus far have had little reward.
15:396 months ago

Free-kick for Palace after a foul on Zaha. Townsend whipped in a delicious ball, Kouyate met the cross but was flagged for offside.
15:356 months ago

Ings header is a comfortable save for Guaita.
15:346 months ago

Southampton are pushing to break the Palace low-block. Every time they attack, the Saints are welcomed by 11 Palace players. Roy Hodgson's side are defensively well drilled.
15:296 months ago

So close to doubling their lead! Dann jumped above the Saints defence, but McCarthy flung himself towards the ball to deny Dann.
15:286 months ago

Palace are nullifying any Saints attack thus far, but Ings is a dangerous threat, who is hungry to continue his good run of form from last season.
15:226 months ago

Half century for Zaha

Southampton are looking for a way back into the game, Palace are squeezing them into their own half.
15:186 months ago

Palace are unbeaten in their last 21 Premier League games when scoring the first goal.
15:176 months ago

13' Great cross from Andros Townsend, who spots Zaha on the edge of the penalty area and he drills the ball past McCarthy. The dream start for Palace!

Zaha only scored 4 goals last season, he has been on red-hot form during pre-season.

It comes to nothing.

Guaita comes out to deny Ings and smothers the ball. Palace struggling to get their foot onto the ball.
15:076 months ago

Stephens connects with the cross, but Guaita had no trouble to save the header.
15:066 months ago

Early pressure from Southampton forces a corner.
15:056 months ago

Southampton get us underway!
14:586 months ago

Kick-off is moments away here at Selhurst Park!

The Premier League returns for both!

New arrival, Mohammed Salisu, will have to wait to make his Saints debut following his summer move from, Real Valladolid.
14:436 months ago

Eze and Batshuayi miss out

Eze suffered a knock in the Eagles 3-0 win over Charlton Athletic in pre-season.

Batshuayi only arrived on Wednesday, with Hodgson not feeling confident in starting the Belgian international.

New signing, Eberechi Eze will wear the number 25 shirt, will he start today?
22:246 months ago

That's all for now, but check back an hour or so before kick-off for the confirmed starting XI's from this Premier League fixture between Crystal Palace and Southampton!
22:236 months ago

How to watch Crystal Palace vs Southampton Live TV and Stream

If you wish to follow the game on television: BT Sport

"It doesn’t feel like a completely new season as pre-season has been very short. For two weeks we haven’t had all of the players here, so preparing for Palace has been difficult. Nobody knows where each team is really at."

"There are always things we can do better and we’ve focused on a few topics over the last few weeks. The players enjoy how we play, but we don’t feel like we’re at our limit so there's always room for improvement."

"I'm pleased with our signings so far. Michy is a player we've admired for a long time; Eberechi Eze is a very good signing who will be with us for a number of years; and Nathan Ferguson is another player we have very high hopes for."

"Eze is available for selection in theory. He's only played 45 minutes for us so far, so still isn't quite match fit yet."

"I don't think moving from the Championship to the Premier League is too difficult if you've got the ability and Eze has the ability. We're convinced we've signed the right player."

"Southampton were probably the form team at the end of last season and have had a good pre-season. They'll be just as excited about the start of the season as us but that's what the Premier League is all about."

The only confirmed injury concern for Ralph Hasenhüttl, is midfielder, Stuart Armstrong, after he was injured on intentional duty with Scotland.

New signing, Kyle Walker-Peters and Mohammed Salisu will be pushing to make their first starts of the season, especially Walker-Peters, who made his move a permanent one over the summer.

Hodgson will have to ponder whether to throw new signings, Eze and Batshuayi into the starting line-up, as they are both searching for match fitness.

Tomkins, Cahill, Sakho, Van Aanholt, Ferguson, Benteke and Wickham will all be unavailable for selection due to injury.

The Eagles have had a successful window, signing the likes of Eberechi Eze, Nathan Ferguson and Michy Batshuayi.

Palace lacked any real goal-scoring prowess last season and Batshuayi and Eze will go along way to help their woes.

The Eagles will look to shake the core of the establishment this season and should more players arrive, Palace have a good chance of making Roy Hodgson's 'Last Dance', a memorable one.

Southampton looking to break the top-10

Following their 9-0 humiliation at the hands of Leicester City, Ralph Hasenhüttl's side were inspired in the second half of the season, with Danny Ings the focal point of their change of fortunes.

The club believe they now have the foundations in place to make themselves a force to be reckoned with this season.

Crystal Palace vs Southampton will be played at Selhurst Park, London, England. The kick-off time is scheduled at 15:00 BST.
21:106 months ago

Welcome back to the Premier League!

Welcome to VAVEL.com’s LIVE coverage of the Premier League match between Crystal Palace and Southampton. 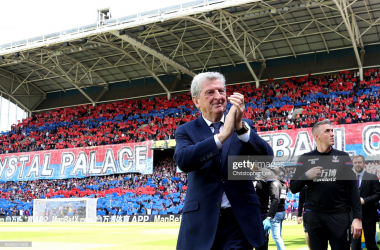