For three quarters of the contest at the Stadio Olimpico - on a sharp, winters evening - the cavils from the Torino fraternity packed inside the historic ground were palpable.

The Granata, after making their best start to a domestic season in 22 years, had not won infront of their own vociferous support since September. But that would be reversed against Roberto Donadoni's hitherto formidable Bologna outfit.

Andrea Belotti opened his account in a Torino shirt 15 minutes from time before Guiseppe Vives rounded Antonio Mirante to add sheen to the scoreline in stoppage time.

Torino, who have been barren at home since their victory over Palermo in September, began with intent and a chance loomed large for Kamil Glik when he rose highest from a corner but could not generate sufficient power on his header.

The Granata hoarded possession during the opening exchanges and, after surviving a fleeting scare when Matteo Mancosu was liberated by Emanuele Giaccherini, they almost opened the scoring via Daniele Baselli. The Italian U21 international surged forward and unleashed a daisy-cutter at Antonio Mirante’s goal, but the Bologna No.1 was equal to it.

Cristian Molinaro was posing a threat down Bologna’s right-hand side and was unfortunate not to fashion a shot at the visitors goal when he burst away from Luca Rizzo. Mirante, though, read it well.

Fabio Quagliarella sprung the offside trap from a set-piece just shy of the half hour mark but the ex-Juventus forward slipped at the crucial moment and could not catch his volley with the desired venom.

Torino continued to probe and, as the away side offered a rare foray forward, they broke with intent. Afriye Acquah squared the ball to Belotti but the striker could not connect. Possession broke to Guiseppe Vives on the edge of the area but the midfielder’s effort skimmed the frame of the goal.

Scarcely tested during the first period, Cesare Bovo was prompted into action when Giaccherini was threaded through and shaped to shoot. The defender, having recovered impeccably, flew in to block his attempt.

Defensive parsimony has characterised the Rossoblu since Donadoni’s appointment and, with the hosts reduced to snapshots throughout most of the evening, their stinginess showed no signs of abating.

However, Daniele Padelli had been a spectator between the Torino sticks and, naturally, there remained a lingering sense that an opener for Giampiero Ventura’s side loomed on the horizon.

Their hopes of stunning the hosts were diminished when Giaccherini limped off seven minutes after the interval, with the diminutive midfielder perhaps still feeling the effects of a crunching challenge he received seconds before half-time.

Just as one former Bianconeri ambled off did the other, Quagliarella, threaten the Bologna goal. Rising high, the burly forward was forced to contort his body to dink his header towards goal but the crossbar denied him. Mirante was rooted to the spot.

Torino looked most menacing from deliveries and Bruno Peres’ centre on 66 minutes forced Domenico Maietta into an improvised clearance.

The game crept towards its autumn and, at long last, the visitors were able to summon an attempt on goal, though Amadou Diawara’s weak-footed effort posed no threat to a hitherto dormant Padelli.

Lively, though, was the remaining 20 minutes as Peres, on one instance, flashed a shot inches wide of the post.

And their pressure soon paid dividends when Belotti opened his account in Torino colours with 15 minutes to play.

Cushioning a lofted pass from defence, in an instant the youngster breezed past Maietta and lashed his effort past Mirante at the goalkeeper’s near post. The relief, from both the supporters and Belotti himself, was palpable. 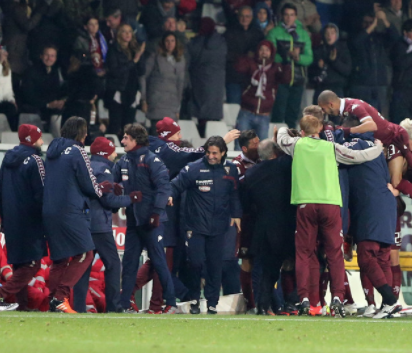 Bologna went in search of a leveller that, on the run of play, they scarcely warranted, with Daniele Gastaldello heading over from an innocuous free-kick.

But victory was ensured when Vives profited from an errant header back from Maietta to round Mirante and slide the ball home from a seemingly impossible angle.