A blow for the dogs, the decision by the video assistant is no try after an offside is seen.

Is that a try for Avarillo?

Avarillo breaks through the Sharks defence and runs the length of the pitch before he touches down behind the line.

Is it offside however?

Surely the Sharks have the two points secured now?

His first game at the Bankstown Stadium since 2017, Goodwin makes the most of the set restart and latches onto a looping kit from Townsend before touching the ball down to earn four more points for his side
10:0620 days ago
The Bulldogs seem to have the upper hand at the minute but just can't seem to break down the Cronulla back-line
10:0420 days ago
16 minutes to go and the game is still at its high-octane levels.

Is there any way that the Bulldogs can find their way back into the game?

09:5920 days ago
An incredible tackle from Watene-Zelezniak, bouncing a Sharks player down to the floor. Incredible
09:5720 days ago
It's been a great game at the Bankstown stadium.

20 minutes left to go and either side look like winning this game, with the Bulldogs getting back into the match after their recent try

Averillo successfully kicks the ball between the posts and the dogs are back in the game
09:5420 days ago

The Bulldogs have got another try back!

Elliots pulls off a remarkable kick close to the line and Foran touches it down to earn four points back for the dogs.

09:5120 days ago
It didn't take long for the Sharks to take advantage of the Bulldogs' sin-bin and their advantage is now ten points.

Shaun Johnson fails to get the ball between the posts from the side line
09:4820 days ago

Katoa grabs his first career treble, latching onto a kick through before flying into the end to score his third try of the night
09:4720 days ago
Brandon Wakeham is put into the sun-bin for hitting out at a Sharks player on the floor
09:4620 days ago
A scuffle breaks out between the players on the field and a penalty is given to the Sharks
09:4220 days ago

A good kick from Shaun Johnson for his second conversion of the night, just tucking it inside of the posts
09:4120 days ago

An incredible pickup from Katoa on the ground at speed on the right wing allows him to run through unmarked before sliding down to score another four for the Sharks
09:3920 days ago
Cronulla look the more dangerous of the two sides and are playing the majority of their football deep into the Bulldogs' half
09:3620 days ago
Four minutes gone and the game has kept up the intensity seen in the first half with end-to-end Rugby being played
09:3420 days ago
Early scrum within the first few minutes and the Bulldogs have the ball within their own half
09:3120 days ago

We're back at the Bankwest Stadium and the second half has begun!
09:1820 days ago

It's been an incredibly enjoyable half of Rugby to watch between the Cronulla Sharks and the Canterbury Bulldogs.

It was the Sharks that started on the front foot, with an early acrobatic try from Sione Katoa that was converted, but being behind saw the Bulldogs increase the intensity and take a hold on the game, resulting in a try from Hopoate in the 28th minute. 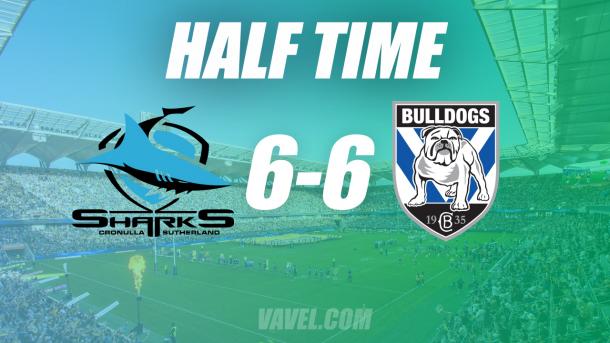 09:1720 days ago
One minute left in the half
09:1520 days ago
Only a few minutes left in the first half. Can anybody score a try before half time?
09:1120 days ago
Five minutes left and the Bulldogs are awarded a penalty inside of their own half
09:0820 days ago
The Sharks kick the ball forward after an impressive set but it goes into touch
09:0720 days ago
Nine minutes to go and it's been a brilliant half to watch so far
09:0620 days ago

Averillo successfully converts Hopoate's try and adds another two points to the scoresheet for the Bulldogs
09:0420 days ago

Wakeham plays through Hopoate inside of the Sharks' ten and he gets the ball over the line to get four points back for the Bulldogs
09:0320 days ago
The Sharks are defending very well and the Bulldogs can't find their way through, with every attack seemingly stopped in the last 10
09:0220 days ago
It's been a great game to watch so far from the perspective of a neutral with brilliant end-to-end football throughout.

The Sharks are the most dominant, but the Bulldogs have come to life since going behind

Shaun Johnson kicks a tough conversion attempt from the right-hand corner in between the posts and it's 6-0
08:4520 days ago

The Cronulla Sharks have now walked out on to the pitch and kickoff is fast approaching
08:0320 days ago
Less than half an hour left to go until the match kicks off in Australia!

Who will win in what could be a big game in either side's quest to avoid the wooden spoon?

07:2120 days ago
Do not miss a detail of the match with the live updates and commentaries of VAVEL. Follow along with us all the details, commentaries, analysis and lineups for Cronulla Sharks vs Canterbury Bulldogs
07:2120 days ago

To keep up to date with all of VAVEL UK's Rugby League coverage, you can find us over at @RLVAVEL on Twitter
07:2020 days ago

If you want to watch the game on TV, your options are: Sky Sports Arena

If you want to directly stream it: Sky Go

If you want to follow the game on the internet, VAVEL UK is your best option!

Can the Bulldogs recover from Roosters hammering?

Last weekend, the Bulldogs were on the wrong end of an emphatic 42-6 victory for high-flying Sydney Roosters.

However, in Round 4, they picked up their first points of the season so far in a 22-2 win against the St. George Illawarra Dragons and will aim to return to that form today

Sharks to bounce back from Dragons defeat?

The Cronulla Sharks were defeated away to St. George Illawarra Dragons 30-16 at the Campbelltown Stadium.

Both teams will be looking to gain points and move away from the bottom of the table, with only two to their name so far.

This is the last game of round 6's fixtures, so either team has a chance to extend the buffer between themselves and bottom-placed Wests Tigers

This match between the Cronulla Sharks and Canterbury Bulldogs will be played at the Netstrata Jubilee Stadium in Cronulla, Australia The kick-off is scheduled for 9:30am BST.
07:0820 days ago

My name is Adam Millington and I’ll be your host for this game. We will provide you with pre-game analysis, roster updates, and news as it happens live here on VAVEL.

Smith unsure on rule changes: Hull KR Boss Reacts to tweaks in the game11 hours ago

As it happened: North Queensland Cowboys 16-42 Sydney Roosters in 2020 NRL2 days ago

Gold Coast Titans vs Cronulla Sharks preview: Can the Sharks carry on form from Manly victory?9 days ago

NRL Round Eight Preview: Roosters aim to continue their red-hot streak against the Storm9 days ago

Parramatta Eels vs North Queensland Cowboys preview: Can the Eels hold onto the top spot?10 days ago
Restore your password
Please enter your user name or email.
Login Member or Writer Panel
Enjoy your own Customized Newspaperwith VAVEL topics' carousels!