The critics have officially been silenced.

Gabriel Douglas, the 2012 All-Around Olympic gold medalist, won the gold medal at the AT&T American Cup by .700 points over fellow American Maggie Nichols. The victory comes four years after she competed as an alternate and turned in the best scores at this same event. Her strong performance at the American Cup pushed her to victory at the 2012 London Olympics.

“I’m having déjà vu moments from 2012 and competing at the American Cup before the Olympics four years ago.” Douglas said after the competition.

Douglas was the top gymnast in three out of the four rotations - she scored a 15.10 on the the vault, a 14.96 on the balance beam, where she was nearly flawless, and a 15.26 on the uneven bars, her best event. She ended her day on the floor exercise, which was nothing more than a victory lap for her. Her 14.83 on the floor was more than enough to secure the victory, and was the second best of the day on that aparatus.

Douglas seems to be getting stronger the further into her comeback she gets. She won the silver medal at last year's World Championship, her first individual medal since the 2012 Olympics.

The victory secures Douglas' place on the 2016 Olympic team, making her the first female to return and make the American Olympics gymnastics team since Dominique Dawes and Amy Chow in 2000. 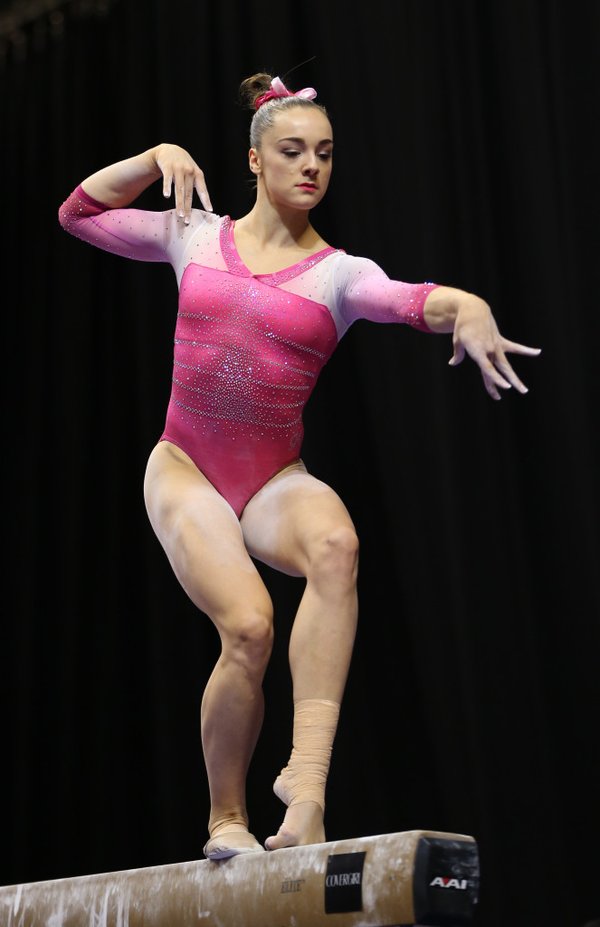 The results show to America's dominance and depth in women's gymnastics, as the United States won the gold and silver at a major international meet without sending World Champion Simone Biles to the event.

Maggie Nichols, who competed in every rotation in the team event at the World Championships, was Douglas' closest competitor. In fact, the gap between Nichols and Douglas was closer than the gap between Nichols and bronze medalist, Amy Tinkler. Nichols defeated Tinkler by 3.5 points. Nichols was second to Douglas on the beam, bars, and vault, and was the only gymnast to score over the 15 point mark on the floor.

The competition for the final qualification spot at the Olympics is going to be a fierce one. Biles is considered the heavy favorite to win the gold medal, but with one country only able to qualify two gymnasts into the final, the second spot will be up for grabs. Aly Raisman, who qualified for the All-Around final four years ago, knocking out reigning World Champion Jordyn Weiber in the process, is expected to make the team, as well.