The Halfpipe World Cup ended yesterday in Tignes, France. A huge crowd came to cheer for the riders, especially the French ones, who were in the race for the little crystal globes of the speciality. Indeed, 8000 at 10.000 people came to support the home hero Marie Martinod, the spectacular Joffrey Pollet-Villard and the two stars from La Plagne fighting for the globe, Ben Valentin and Kevin Rolland. The freestyle skiers gave us an amazing last competition of the season in the breathtaking spot that is Tignes.

Maddie Bowman didn’t disappoint yesterday in the French Alps. The American shewed an impressive consistency, landing all of her three runs above the score of 87.00. She took the victory in her third and final try, earning the score of 91.00, where she combined all possible factors to reach her goal. Indeed, everything was reunited: a huge amplitude, clean grabs and a combination of three different 900s. The freestyle skier stated to FIS Freestyle she was “very happy to finally finish the season healthy”.

In second place is Annalisa Drew. Yesterday was her first ever World Cup podium after twenty attempts. She finally was able to put everything together to reach her goal, claiming her podium at her run with the score of 87.80. She managed to land a back-to-back 900 as a starting trick of the run and a 1080 as last one.

The home favorite Marie Martinod finishes third. She claimed the podium in her second run with the score of 87.00. The people all around the pipe went crazy at the end of the contest, knowing their rider climbed on the podium in her station.

The little globe for Onozuka

The Japanese rider Ayana Onozuka just finished off the podium yesterday, landing at the 4th placer. However, she earned the little crystal globe of the halfpipe speciality yesterday in Tignes. A delighted Onozuka stated yesterday to the FIS “Although I missed the podium today I was able to grab the globe again this year so I’m very happy to finish the season like that”.

Logan makes it a first 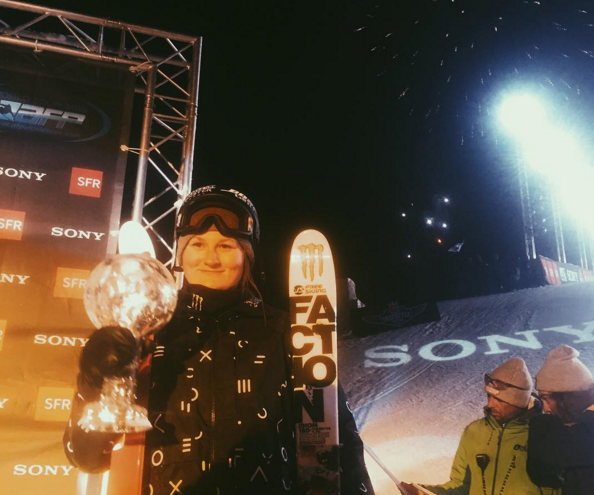 Yesterday, Devin Logan became the first Halfpipe/Slopestyle skier to take the Overall Big Crystal Globe of the 5 coveted disciplines of the FIS Freestyle. In the Overall standings, she finished ahead of the Ski Cross racer Anna Holmlund. Logan made history by being a very complete freestyle skier, competiting in both Halfpipe and Slopestyle World Cups. She ended second in the Halfpipe overall classement and 7th in the Slopestyle. She was utterly happy as she stated “Being the first freeskier to win the overall World Cup globe feels pretty awesome. I’ve been working really hard doing both slopestyle and halfpipe events and I'm feeling like I'm going in the right direction and overall I'm in a good spot, so I'm really happy. Being the only female to compete in both slopestyle and halfpipe gets pretty rough during the season going back and forth between competitions but, again, I've been doing it for so long that I couldn't picture doing anything else.”

Men: Frenchmen Made It A Hat Trick 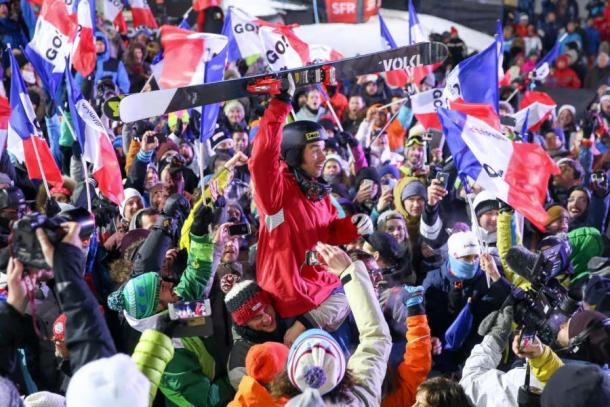 Kevin Rolland skied with his guts yesterday in Tinges. In front of the fan club of his station, his family and friends, the Frenchman gave everything to win both the competition and the little crystal globe of the Halfpipe, finishing ahead of Aaron Blunck in the Overall standings of the speciality. Rolland took the victory with his second run with the amazing score of 95.80. In contrary to the two other men on the podium who landed 5 tricks, Rolland finished winner skiing a run composed of 4 tricks. However, everything was reunited to make it an unforgettable one. He especially landed a back-to-back dub 1260, focused on his receptions but also kept a huge amplitude on each of his jumps. A joyful Kevin Rolland celebrated his victories with the crowd, who went crazy over their champion. After receiving his trophies, the Frenchman said “It’s a perfect ending of the season for me. I have all my family and friends coming here to Tignes. It was my goal at the beginning of the season to take the globe and it was a big fight in this last competition. Everybody put down some good runs and it was a very good show overall, so I just couldn’t be more happy.”

In second place is Lyman Currier. The young American got his first ever halfpipe podium yesterday in Tignes. He was pretty stoked after his third run getting the score of 94.80. He included to his attempt three double-corks, making it surely the best run of his life.

Ben Valentin completes the podium. The young man from La Plagne, as his friend and teammate Kevin Rolland, couldn't be more delighted yesterday in front of his unleashed crowd. His last attempt, with the score of 92.40, made him climb on the podium, his third this season, all three shared with Kevin Rolland. Valentin also ends third of the Halfpipe World Cup, even if his goal was the overall victory, the rider was pretty stoked yesterday as he stated “I think that was the best competition we had this winter. Everyone skied very well so I’m just so happy to share the podium with Kevin (Rolland) again for the third time this season. I’m following him, and he’s still winning. He’s the best right now and I’m learning from him everyday and I hope that I will be the best soon.”