It's finally football season! Did you miss it?

The inaugural season of the XFL starts this weekend with the Seattle Dragons travelling to our nation's capital to take on the D.C. Defenders. Momentum for the season starts this afternoon, and impact players litter these rosters.

Seattle is led by Jim Zorn, former Seahawk quarterback who piloted their offense when the Seahawks were putting in roots in the NFL. Symbolically as much as strategically, Zorn will navigate the Dragons through another initial season. However, Zorn remains hesitant. In recent interviews, Zorn has suggested that his squad isn't as big or as fast as other teams, suggesting that this might not be the ideal roster for this kind of league. With CBS Sports ranking his squad #8 in the initial Power Rankings, Zorn could be hedging his bets.

This doesn't mean the former Washington Redskins Head Coach doesn't have any toys to play with on his roster. Brandon Silvers beat out B.J. Daniels for the starting job, and the former AAF starter should provide some electricity on offense. The Dragons' converted from Navy QB Keenan Reynolds to Wide Receiver and Jaquan Gardner has shown flashes of big-time playmaking ability in the backfield. 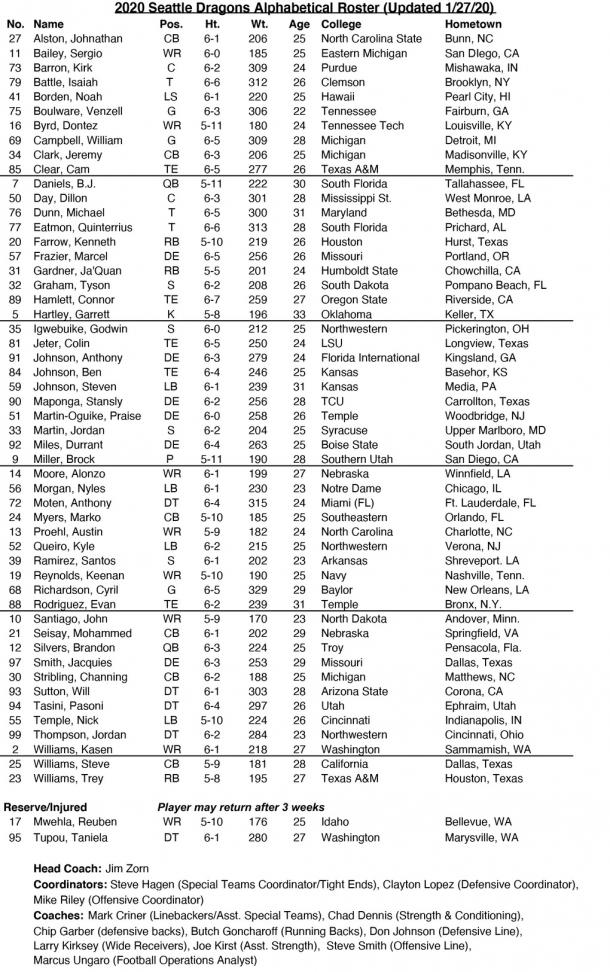 Washington D.C. is becoming synonymous with championships, and those expectations will easily transfer to the Defenders as Pep Hamilton directs a roster full of NFL-level talent.

Cardale Jones, former Ohio State and Charger signal-caller will step into that role once again for the Defenders and has options on the outside to make plays. Rashard Ross, a former Washington Redskin, will be a huge weapon for Jones and is looking, like everyone else in the league, to make teams in the "big leagues" give him another shot.

Jay Bromley will anchor the defensive line for D.C. and gives them a chance to stifle any sort of run that Seattle will be looking to muster.

D.C. has captured the media narrative this offseason, trying out Barstool Sports' personality PFT Commenter for a tryout for their teams' kicker. Buzz for the potential signing raged online, with reporters such as Adam Schefter reporting on the potential signing. Although ultimately cut and given the option for a practice squad contract, D.C. appeared to have given the XFL more general interest that the AAF could fashion all season.

The XFL promises to be football reimagined, and the inaugural game on Saturday will be the lightning rod for which all narratives and themes are written. New rules and new players offer to be an additional shot of football that America needs during the waning winter months. The XFL is seeking to be that jolt.