Thank you very much

This concludes the broadcast of the afternoon's Athletics session of the Olympic Games. The big winners of the day were Venezuela's Yulimar Rojas in the triple jump with a world record of 15.67meters, while the Italian surprised everyone by winning the most important event in athletics, the men's 100m.
9:00 AM2 months ago

Results of the men's 100 meters

The Briton made a false start and has been disqualified from the final.
8:46 AM2 months ago

Men's 100 meter final is coming up

Can Usain Bolt's record be broken? We will know in a few seconds
8:35 AM2 months ago

LADIES AND GENTLEMEN, YULIMAR ROJAS IS CROWNED AS THE BEST TRIPLE JUMPER IN HISTORY WITH A JUMP OF 15.67 METERS. A BEAST OF THE DISCIPLINE
8:33 AM2 months ago

Patricia Mamona takes second place with a leap of 15.01 and a national record
8:32 AM2 months ago

Spanish woman takes third place in the competition with a national record of 14.87 meters
8:26 AM2 months ago

Failed jump for Yulimar, who if she stepped well on the board was a world record, she still has one more jump to go.
8:22 AM2 months ago

Ana Peleteiro improves her personal best and the national record set in the second jump with 14.87 and momentarily regains the bronze medal.
8:17 AM2 months ago

Positions after the first four jumps

UUUUY the Venezuelan jumps 15.25 in her fourth jump, still has two chances to make the world record
8:12 AM2 months ago

Mamona on her fourth attempt reached 15.01m Congratulations!
8:11 AM2 months ago

The Jamaican improved her mark in the competition with a jump of 14.84m and took third place, taking the medal for the moment from Spain's Peleteiro.
8:03 AM2 months ago

The third round of jumps ends

The Spaniard's third attempt falls short of the mark, after stepping on the board.
7:51 AM2 months ago

Puuuf Yulimar almost reached 16m in the jump, but failed after stepping on the board.
7:48 AM2 months ago

The second round of jumps ends

Second failure of the Jamaican, who made two jumps over 15m, but they were invalidated for going over the jump line.
7:43 AM2 months ago

The jumps of Patricia Mamona 14.91m and Ana Peleteiro 14.77m have become, in addition to their personal best, national records Congratulations!
7:39 AM2 months ago

Very good jump of the Spaniard who achieves a mark of 14.77m and gets her personal best.
7:36 AM2 months ago

End of the first round of jumps

Marks of the competition after Yulimar's performance

OLYMPIC RECORD FOR YULIMAR 15.41 METERS IN HER FIRST JUMP
7:22 AM2 months ago

Athletes prepare for the start of the triple jump finals

In a few minutes, the women's triple jump final will start, where the favorite is the Venezuelan Yulimar Rojas.

Camacho-Quinn broke the Olympic record of 12.26 held by Australia's Sally Pearson at London 2012 and came within 6 tenths of the world record.

After three false starts and a caution for the representative of Great Britain, the second semifinal finally ended.

Results of the first semifinal of the men's 100 meter race

First semifinal of the men's 100-meter

Britain's Prescod disqualified for false start
6:18 AM2 months ago

Athletes who have already surpassed 2.19 meters

While NEDASEKAU and TOBE failed in their first attempt.

Less than a hour

Less than an hour to go before the start of the evening session of the Tokyo Athletics Championships, which will feature the men's high jump final.
8:16 PM2 months ago 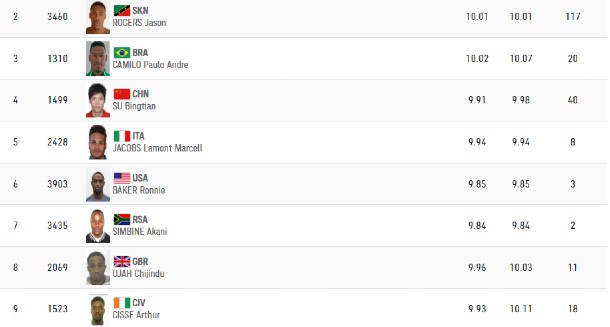 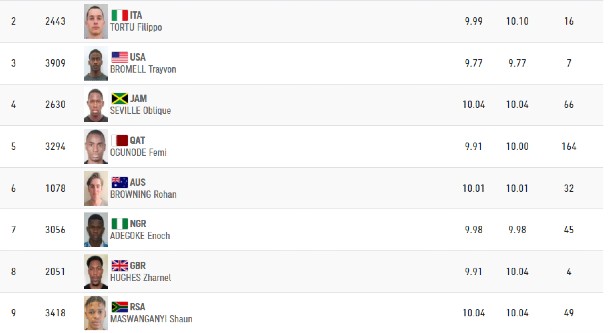 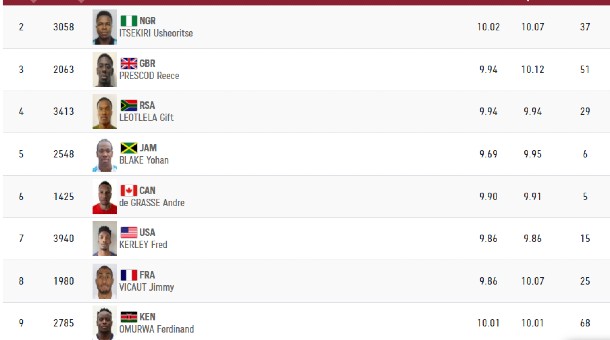 This is perhaps the most certain medal in Athletics in the Olympic Games, the Venezuelan Yulimar Rojas is the top favorite to win the gold medal of the competition and is also expected to break the world record, which is held by the Ukrainian Inessa Kravets with a mark of 15.50 meters, while the Venezuelan has her best mark of the year at 15.43 meters. In fact, Rojas' mark is better than the Olympic record held by Cameroon's Francoise Mbango at 15.36 meters.

Participants of the high jump final:

This final will be very even and very interesting, the current world number 1 is the representative of the Russian Olympic Committee, Ilya Ivanyuk together with the Belarusian Maksim Nedasekau have the best marks of the year with 2.37 meters which are their personal bests, while the Qatari Mutaz Barshim has his personal best at 2.43 meters, but this season he has only jumped up to 2.30 meters.

What time is track and field finals for olympic games?

How to watch track and fields finals Live Stream on TV and Online?

If you want to watch the evening track and field live on television, your options are: Eurosports.

If you want to stream it directly: Streaming services and the Eurosports app.

If you want to watch it online, the best option is VAVEL US!

Good morning to all VAVEL readers! Welcome to the broadcasting of the Athletics competition in the afternoon, which will feature three finals: Men's High Jump, Women's Triple Jump and Men's 100m, belonging to the Tokyo 2020 Olympic Games. The day will start at 12:10 pm.