We would like to thank you for your attention during the broadcast of the men's athletics 800m gold medal final. To be informed about the Tokyo 2020 Olympic Games
8:24 AM2 months ago

EMMANUEL KORIR IS THE WINNER OF THE MEN'S 800 METERS IN ATHLETICS!

KORIR AND ROTICH TAKE THE FIRST TWO POSITIONS, POLAND APPEARS ON THE SCENE WITH DOBEK!!!!

KENYA PUTS ITS TWO RUNNERS IN FRONT, IT WILL BE 1, 2 ON THE PODIUM FOR THE AFRICAN COUNTRY!
8:09 AM2 months ago

Kenyans Ferguson Rotich and Emmanuel Korir take the first positions, LET'S GO FOR THE LAST METERS.
8:07 AM2 months ago

Competitors line up and the men's 800 meter track and field final begins
7:49 AM2 months ago

Adrián Ben: The Spaniard who wants to keep the gold medal

The Iberian managed to record a time of 1:44.18 during this season, which became his personal best. Now, Ben will be looking to get on the podium and win the gold medal in this competition.
7:17 AM2 months ago

We will have all the details of the men's 800 meters athletics competition for the Olympic gold shortly.
1:22 AM2 months ago

Don't miss a single detail of the men's track and field 800m final. We will have commentary and the finishing positions of the competitors.
1:17 AM2 months ago

How to watch Men's Athletics 800 meters FinalLive Stream on TV and Online?

If you want to watch the men's athletics 800 m final live on TV, your options is: CBS Sports.

Athletics as the king sport of the Olympics

"Track and field is the biggest sport at the Games, with a program divided into competitions that take place both on the track and on the street. The concept of running faster than rivals may seem simple, but every aspect of an athlete's performance must be flawless to win gold."

Records in the 800 meters per competition 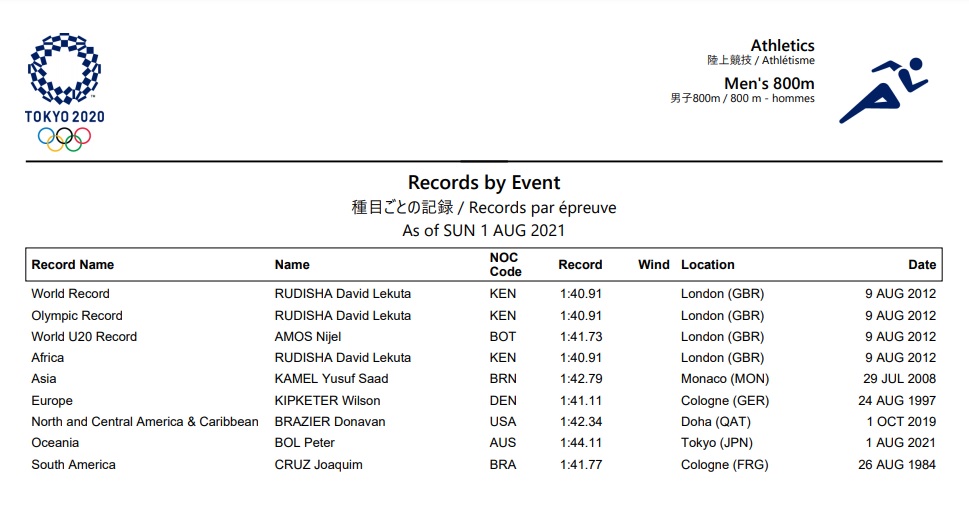 The match will be played at the Tokyo Olympic Stadium

Inaugurated especially for the Tokyo 2020 Olympic Games, the Tokyo Olympic Stadium has a capacity of 80,016 spectators. The stadium is the venue for athletics and soccer competitions.
12:37 AM2 months ago

My name is Esteban Monsalve and I’ll be your host for this game. We will provide you with pre-game analysis, standings updates, and news as it happens live here on VAVEL.com