Thank you for joining us for this match. Until next time! 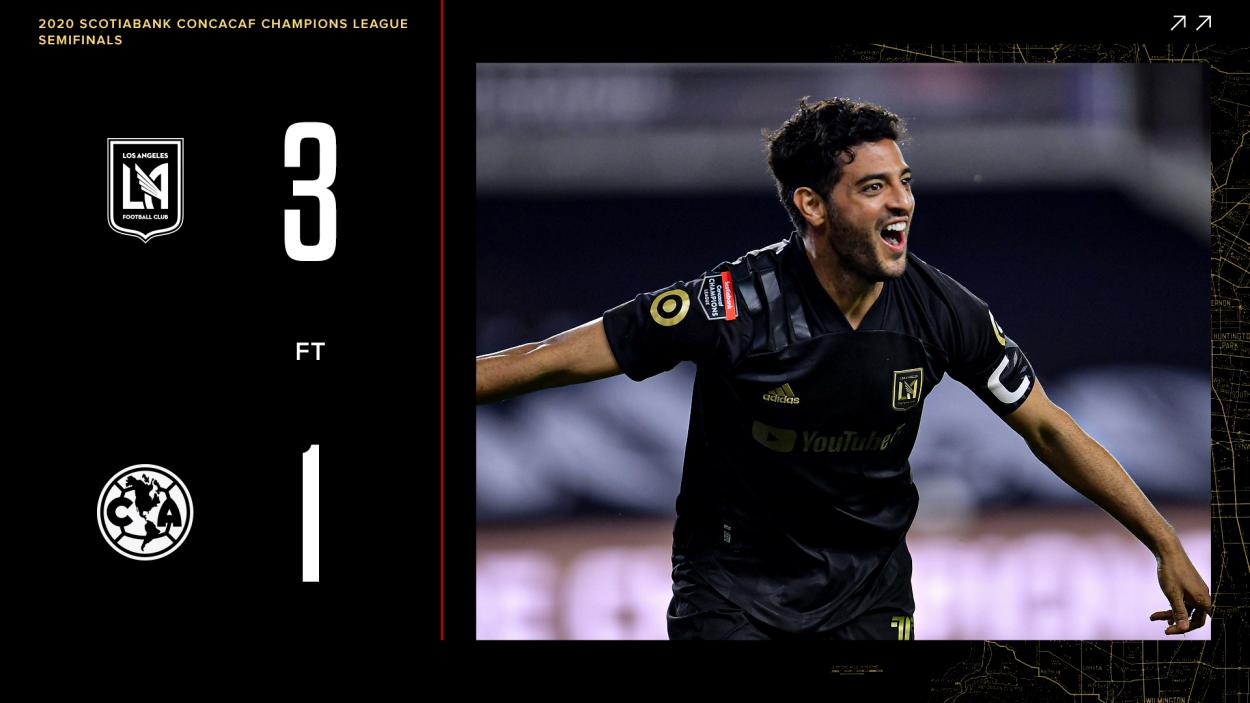 The final nail in the coffin. Here's Blessing's goal.

In a very eventful match, LAFC bests America and will make its way to the 2020 CONCACAF Champions League Final.
1:36 AM9 months ago

With America all out on the attack, Rossi has a one on one with Ochoa.

The keeper saved the first time, but Blessing arrives from behind to make it 3-1.

Four minutes of added time!
1:26 AM9 months ago

A shot by Sergio Díaz takes a small deflection and then is easily handled by Vermeer.
1:21 AM9 months ago

Díaz, Escoboza and Naveda replace Córdova, Cáseres and Suárez.
1:16 AM9 months ago

Luis Reyes makes an unnecessary sliding tackle on Vela and gets sent off.
1:11 AM9 months ago

Luis Reyes takes a potent free-kick and Vermeer makes a very unorthodox save to keep LAFC in the lead.
1:06 AM9 months ago

LAFC now defends with all they can.

Vela and Blessing are making long defensive runs to not allow America's full backs to get into attacking position.

Ginella comes on to replace Cifuentes.
12:56 AM9 months ago

Richard Sánchez is replaced by Andrés Ibargüen.
12:51 AM9 months ago

Another shot by Suárez. This time it hits the side netting.
12:46 AM9 months ago

After a great run from Córdova on the left wing, the ball finds its way to Suárez who takes a shot that is barely blocked by a defender.
12:41 AM9 months ago

Diego Rossi leads LAFC's quick transitions to try to hit America on the counterattack.
12:36 AM9 months ago

America now with the need to attack will add men forward.

Taking advantage of Atuesta's red card, Herrera decides to bring Martínez in instead of a defender.

Ramón Juárez is replaced by Roger Martínez.
12:26 AM9 months ago

Derived from the incidents in stoppage time, America manager Miguel Herrera was sent off.

LAFC made a substitution: Musovski was replaced by Blessing.
12:21 AM9 months ago

And this was the goal to give LAFC the lead!

The equalizer by Vela!

Goal @LAFC!@11carlosV scores the equalizer in the beginning of the second half! | #SCCL2020 pic.twitter.com/FOni7QQeJl

Vela does it again and LAFC now takes the lead!
12:06 AM9 months ago

Carlos Vela takes advantage of a mistake by the America defense to equalize.
12:01 AM9 months ago

We're ready for the last 45 minutes of the match between LAFC and America.
11:56 PM9 months ago

After seven minutes of injury time, the referee finally ends the first half.

Tempers are very warm. Both managers get into discussions with members of the opposing bench.

After communication with his assistant, the referee decides to send Atuesta off.
11:46 PM9 months ago

The game seems to be getting out of the referee's hands at the moment.

Now Atuesta and Ochoa have a confrontation after a play inside America's box.

Viñas and Murilo get cautioned after a bit of scuffle near midfield.
11:36 PM9 months ago

Suárez is booked after a strong challenge on Vela.
11:31 PM9 months ago

Corner kick play for LA. After some rebounds,  the ball falls to an offensive player near the penalty spot.

Ochoa makes a world-class save to a very powerful shot.

Vela tries a finesse shot from outside the box, but Ochoa makes an easy save.
11:21 PM9 months ago

The LA side continues to push forward but they lack clarity due to the 7 men that America has designated to defend.
11:16 PM9 months ago

America heavily relying on set-pieces plays to cause discomfort to LAFC who are having some trouble defending them.
11:11 PM9 months ago

Vela lays the ball off to Rossi inside the box, however, six America players were quick to surround him and stop a possible shot.
11:06 PM9 months ago

Cifuentes makes a run towards the box and heads the ball.

His attempt goes a few feet over the crossbar.

LAFC continues to be in control of the ball trying to use the pace of its players to create danger on America.

Meanwhile, the Mexican side attempts to hit back on the counter via Córdova and Viñas.

This was the header from Cáceres to put America in front!

Cáseres is cautioned after fouling Palacios near midfield.
10:46 PM9 months ago

In a corner kick play, Cáceres makes a run towards the near post and heads it past Vermeer.

Palacios gets a yellow card for throwing a punch at Leo Suárez's leg.

The America players argue he should be sent off.

The LAFC players argue for a handball inside America's box, but the ref says play on!
10:31 PM9 months ago

America playing with three central defenders in the opening minutes of the match.

We're underway with the match between LAFC and America!
10:21 PM9 months ago

With "Seven Nation Army" playing in the background, both LAFC and America make their way onto the pitch.

We're seconds away from the start of the match!

¡Both teams are just about ready for the match!

America and LAFC are a few minutes from facing-off in an exciting match for a spot in the final of the 2020 Champions League Final. 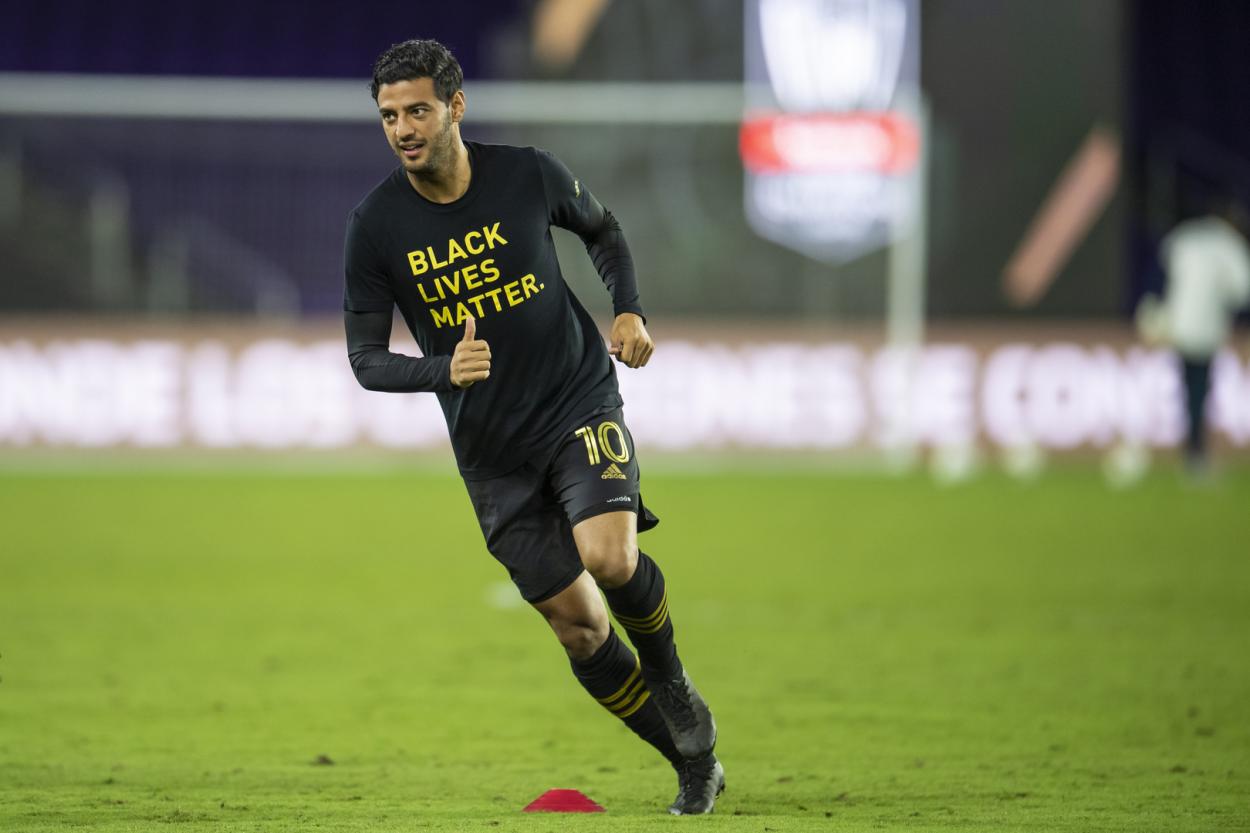 Bradley spoke on the greatness of America

“We have respect for the institution of Club América,” LAFC Head Coach Bob Bradley said.

“We have respect for Herrera. A semifinal against Club América is special. We are in our third season and we are still growing. But we are proud of our football, proud of our fanbase and we have talked often about how we started the season so excited to be in Champions League.”

This will be the first time these two teams face-off in an official competition.

While LAFC was founded only 6 years ago and has been oly competing the last 3, América has a history of almost 105 years.

Breaking: Tigres advances to the Final!

With a 3-0 victory over CD Olimpia, Tigres will compete in the 2020 CONCACAF Champions League Final.

The winner of our match will be their rival in the match for the continental title. 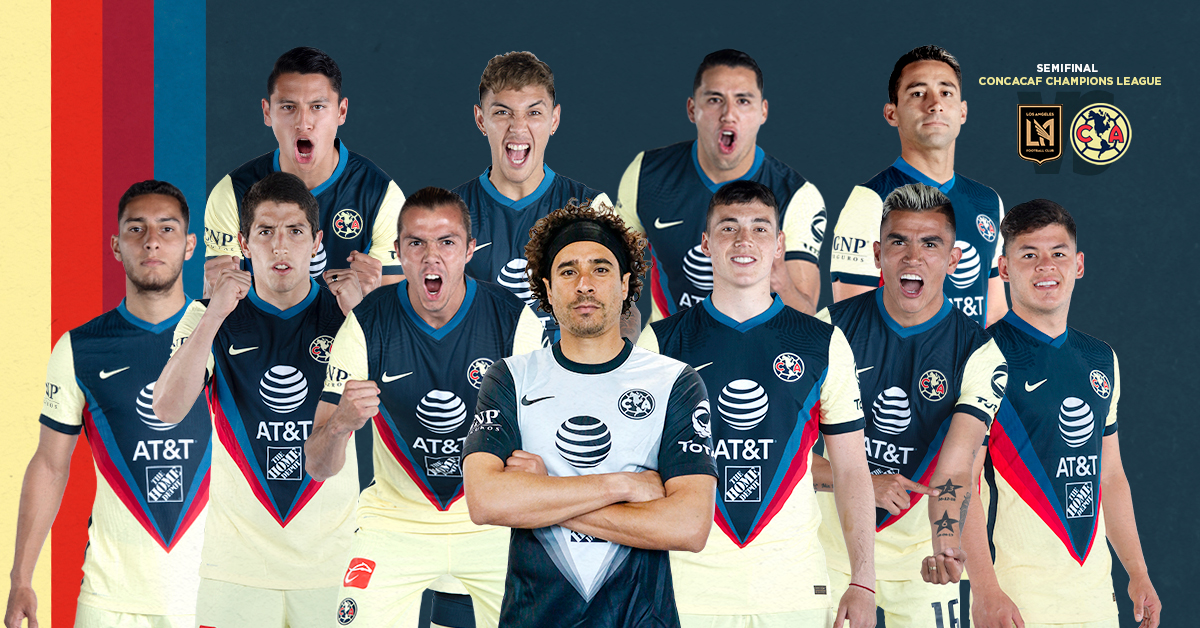 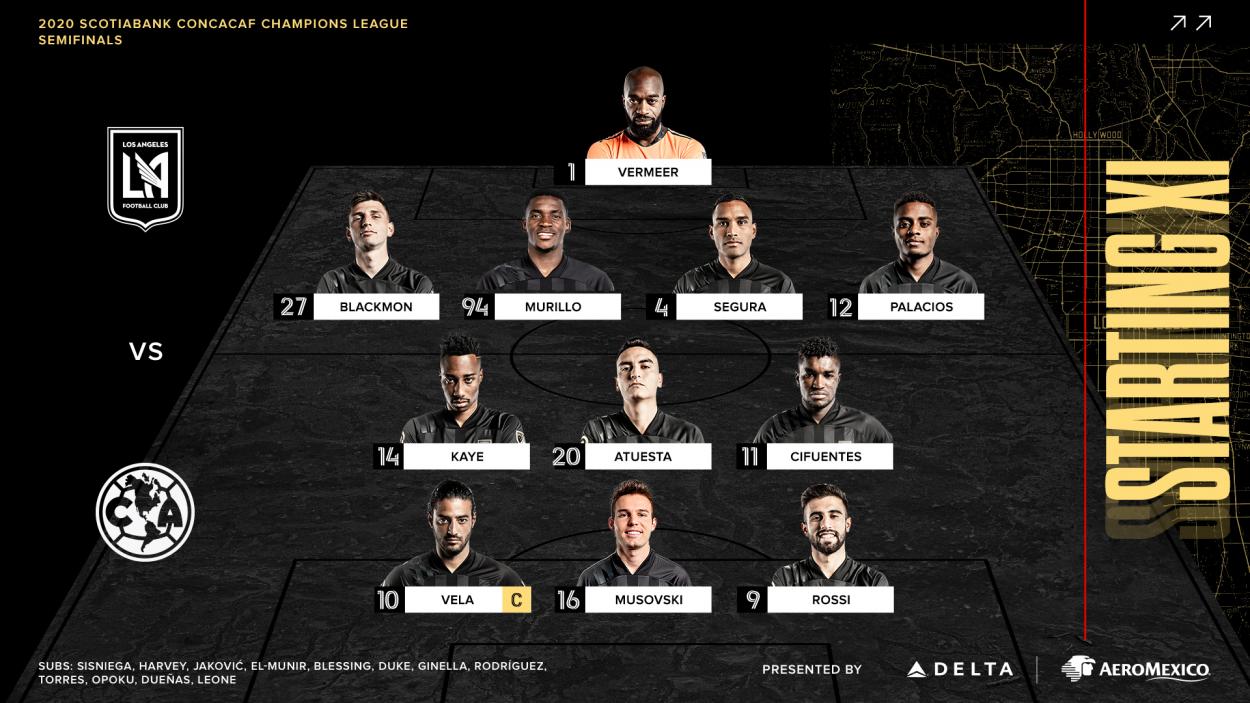 This was America's arrival to Orlando

Orlando City SC's home ground will be the venue for this semifinal match.

America made its arrival at the 25,500 seater stadium to face a difficult rival in LAFC.

No new COVID cases for the semifinals

Earlier today, CONCACAF informed that tests conducted on the four teams competing in the semifinals gave no additional positive results.

This means that both LAFC and America will count on the same players they registered for the quarterfinal stage.

Córdova will be key if America hopes to win

America has a very patched-up squad thanks to injuries and COVID-19 infections.

If they're hoping to progress onto the next round, the young Mexican international Sebastián Córdova will most-likely be the key player. 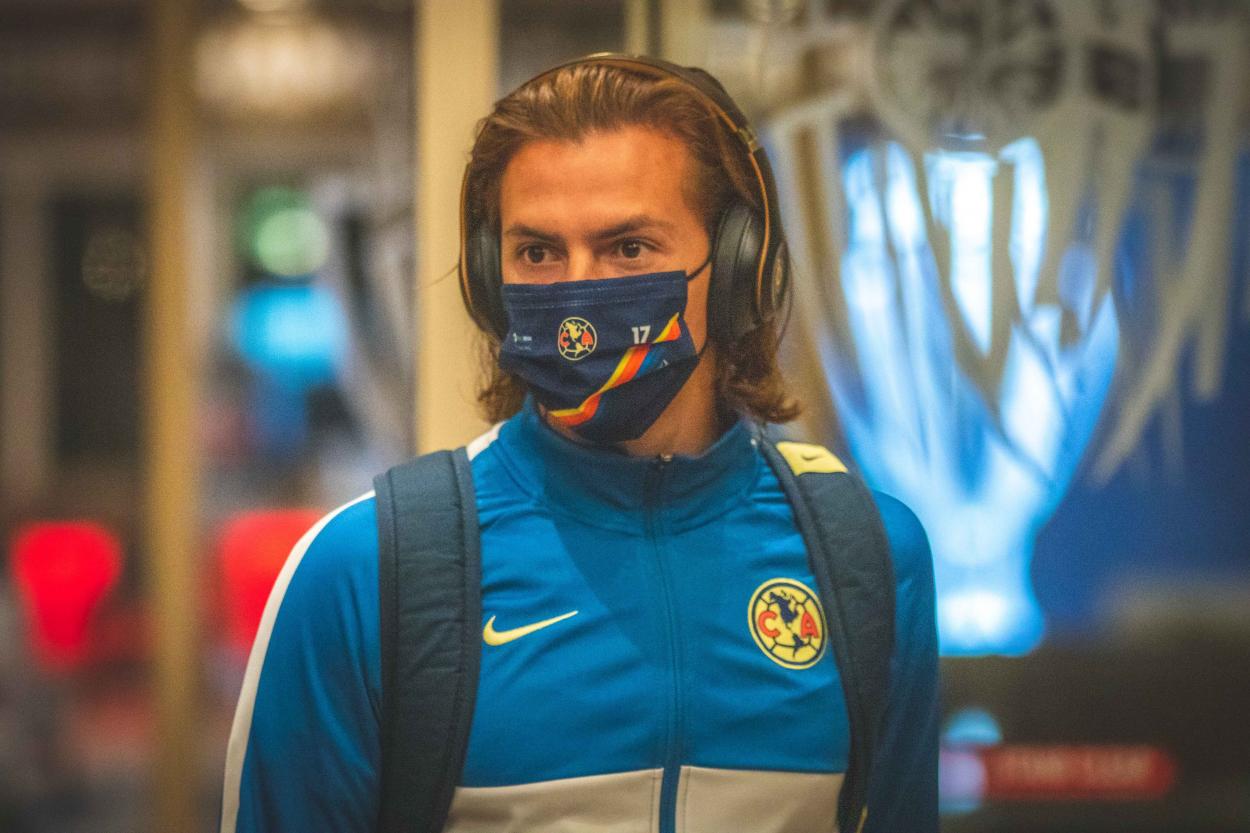 Can Carlos Vela lead LAFC to an internaional final?

Mexican superstar Carlos Vela will try to lead Los Angeles FC to the first international final of the club's history.

To do so, they'll have to overcome perhaps North America's biggest club. 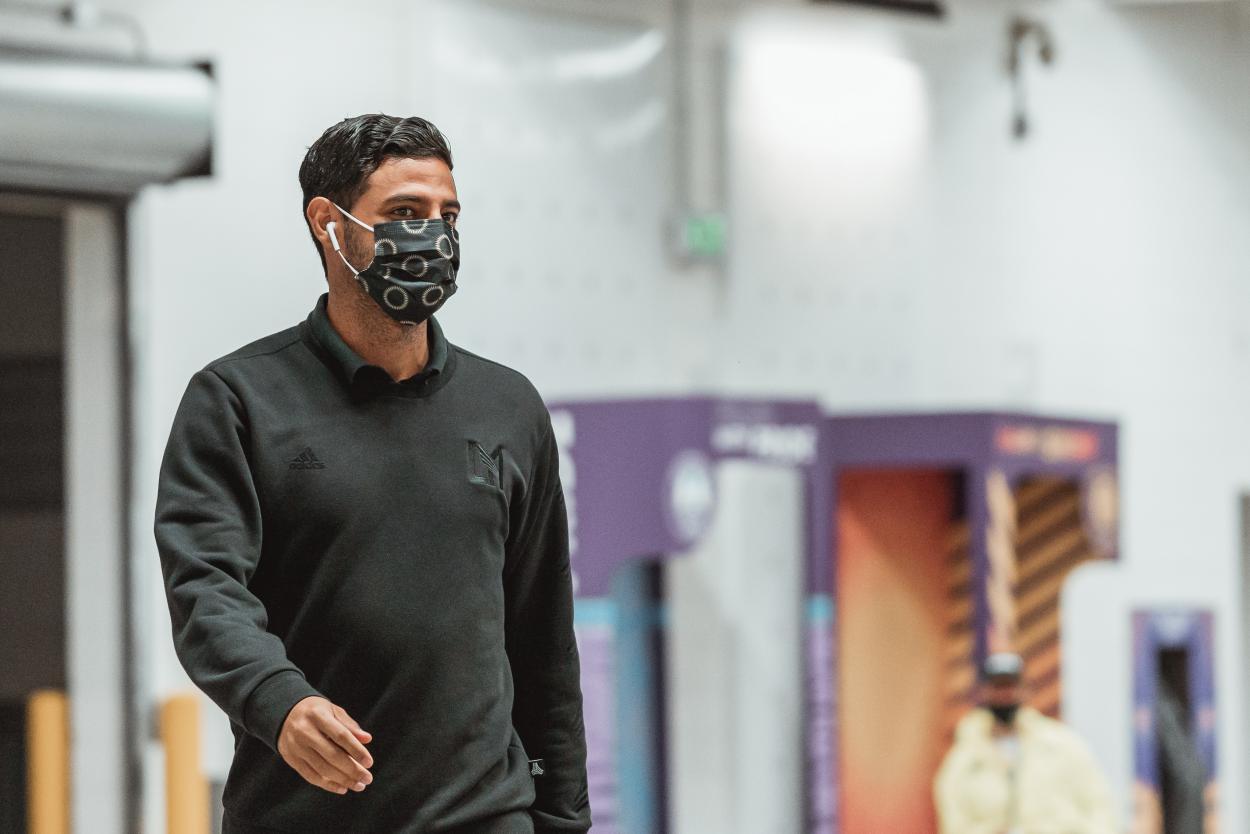 We're ready from Orlando to bring you all the action of the match between LAFC and America.

Follow along with us all the details, commentaries, analysis and lineups for this LAFC vs America match.

For a spot in the Final

The winner of this match will face the victor of the game between Tigres and Olimpia in the 2020 CONCACAF Champions League Final.

The champion will book their spot for the 2020 FIFA Club World Cup which, due to the current special circumstances, will be held on February 2021 in Qatar.

Facing his next team?

During the week, rumors about America's intentions to sign Carlos Vela surfaced.

While this would reunite him with his long-time friend Gio Dos Santos, America boss Miguel Herrera denied this possibility.

"There is no possibility, I would love to have Carlos Vela in a team again, but it is a lie. Carlos is very happy with his club and continues to have offers from Europe", he explained. 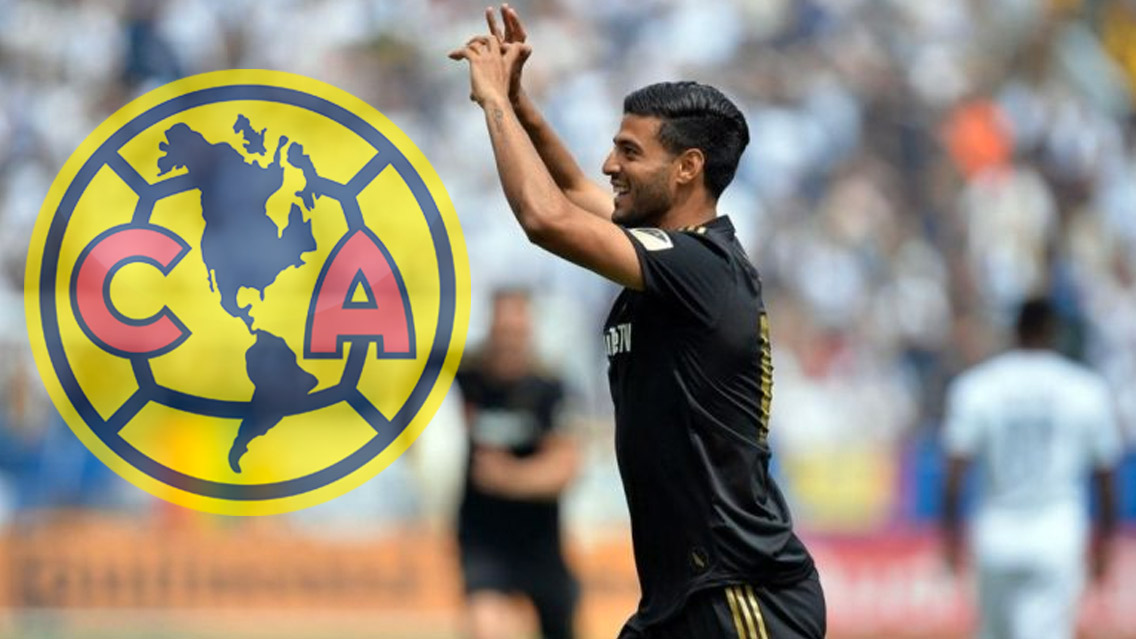 How to watch LAFC vs America Live TV and Stream

If you want to watch the game on TV, your options are Fox Sports and TUDN.

If you want to directly stream it: TUDN App & FoxSports.com

America reach the semifinals in not the most-convincing fashion

America made it to the semifinals after going over Atlanta United in their two-legged tie.

They were able to get a convincing 3-0 win in Mexico City before the forced break due to the pandemic. However, the away match a few days ago (also played in Orlando) saw them fall 1-0 with a very underwhelming performance.

Can Miguel Herrera and his men turn it around and win tonight?

After all sporting activity was postponed before the start of their quarterfinal tie, LAFC and Cruz Azul decided who would move on using a single game in a neutral venue rather than the usual two-legged series.

Despite a slow start, LAFC was able to overcome a one-goal deficit to progress onto tonight's semifinal.

Earlier this year, it was decided that the final rounds of the 2020  CONCACAF Champions League will all be played in a single venue after the delay caused by the COVID-19 pandemic.

The LAFC vs America match will be played at the Exploria Stadium, in Orlando, Florida.