Thank you for following live on VAVEL

Thank you for following the live coverage of Algeria vs Guinea on VAVEL. Continue to visit the VAVEL portal to keep up to date with everything that is happening in the world of sport.
4:58 PM7 days ago

The match ends, Algeria wins by the minimum difference and Guinea is defeated.
4:42 PM7 days ago

GOOOOOOOOOL FOR ALGERIA! The home side are already ahead thanks to striker Slimani.
4:31 PM7 days ago

Guinea keeps possession of the ball, but Algeria's good midfield pressure prevents them from doing any damage.
4:30 PM7 days ago

The game is a little bit tight, both teams are trying to find a way to score the first goal but the distribution is not good.
4:18 PM7 days ago

Morgan Guilavogui crosses the ball too much and his attempt ends in a goal kick.
4:10 PM7 days ago

The second half begins, Algeria and Guinea continue to battle for the victory.
3:55 PM7 days ago

The first half is over

The first half ends between Algeria and Guinea, both teams are tied 0-0 at the moment.
3:45 PM7 days ago

Sofiane Bendebka's through ball but Delort can't get to the ball.
3:35 PM7 days ago

Bilal Brahimi gets in a dangerous cross but no one contacts the ball inside the area.
3:33 PM7 days ago

Adam Ounas heads inside the area but the goalkeeper covers the ball.
3:32 PM7 days ago

Amadou Diawara's left-footed shot is just wide of the post.
3:15 PM7 days ago

Guinea responds with an attack by Bayó who receives inside the area, however, the attempt ends up wide.
3:10 PM7 days ago

Andy Delort's shot on goal goes just over the crossbar and Algeria almost opens the scoring.
3:04 PM7 days ago

The game between Guinea and Algeria kicks off, both clubs will be looking for a victory today.
2:53 PM7 days ago

In a couple of moments we will start broadcasting the match between Algeria and Guinea, a FIFA international friendly match.
2:53 PM7 days ago

This is the lineup that Guinea sends to the pitch to try to beat one of the strongest opponents in Africa. 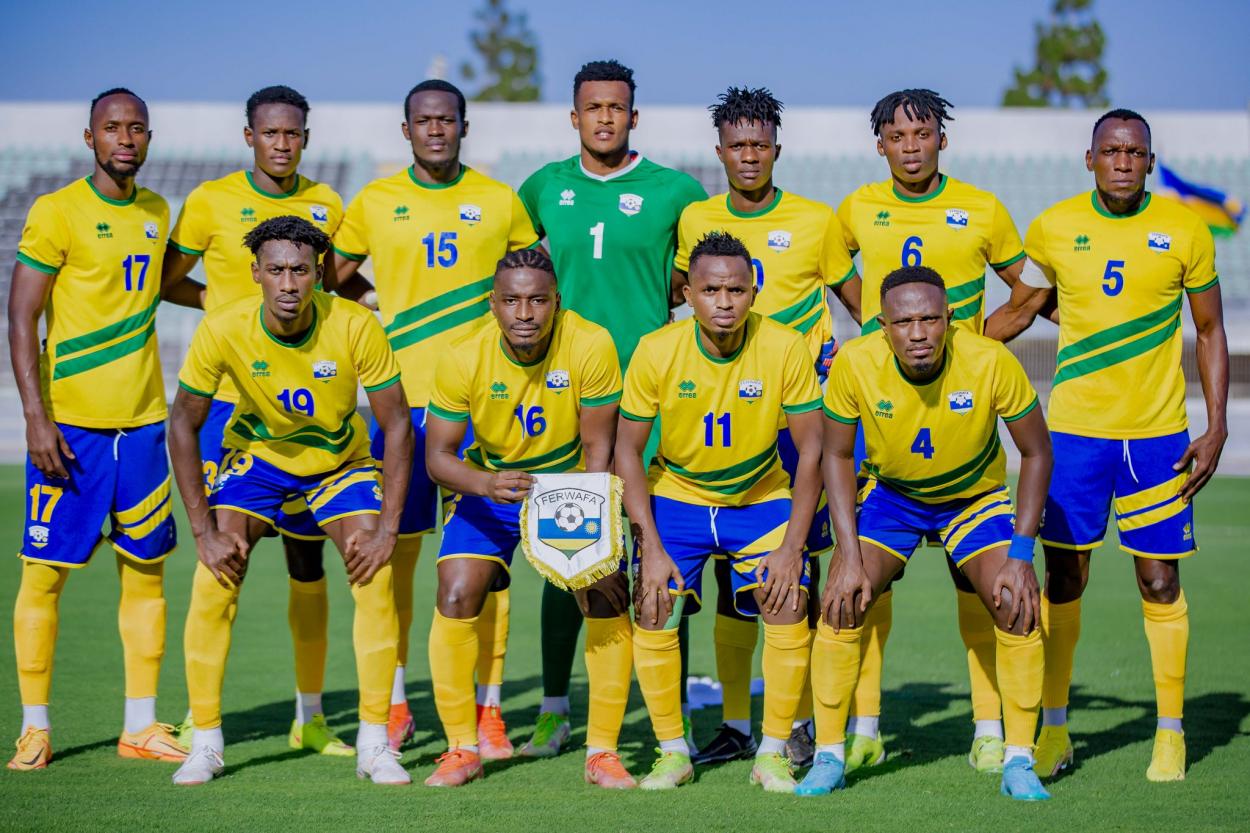 This is the lineup that Algeria is sending to the field to win this FIFA friendly match. 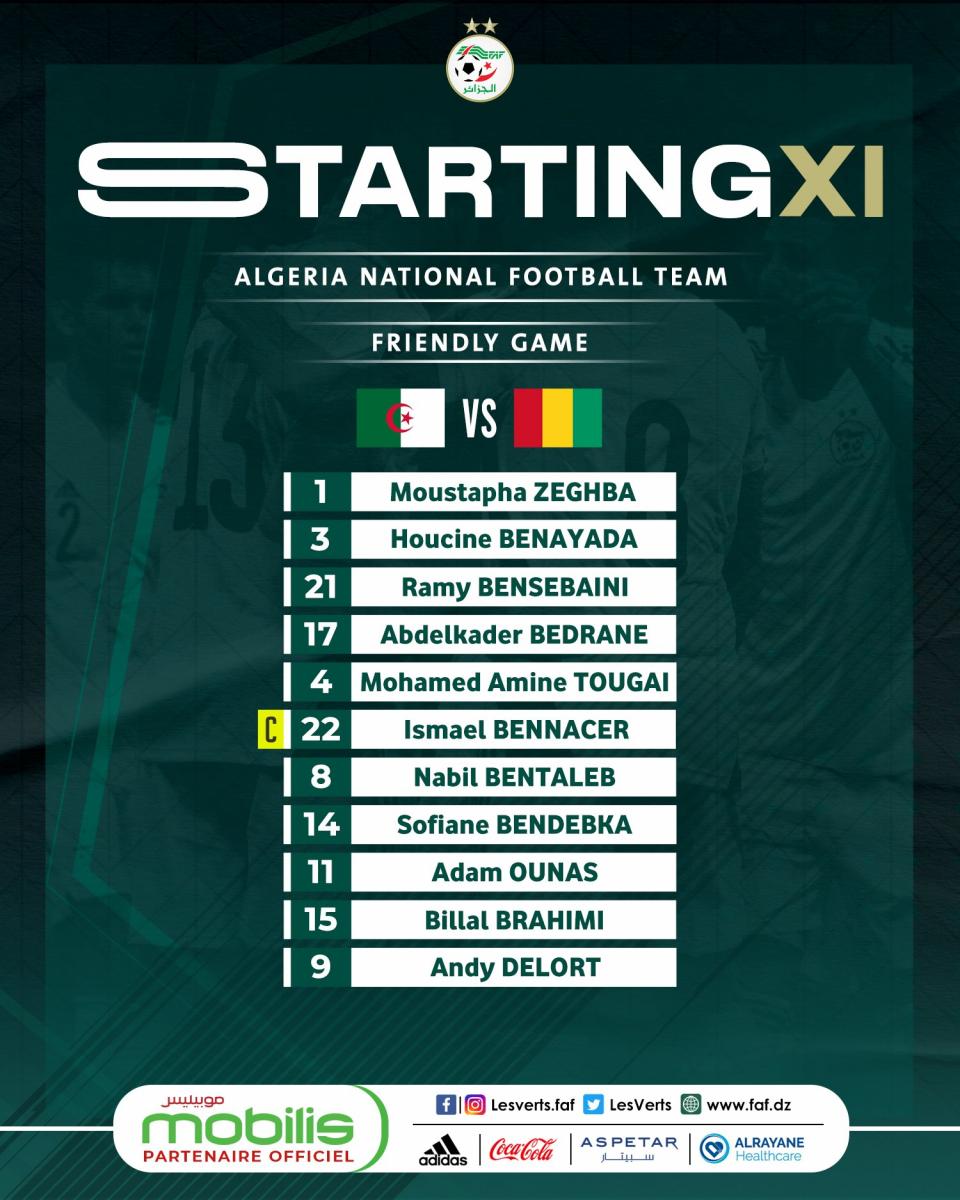 TO REPEAT THE FEAT OF EQUATORIAL GUINEA

The 2021 Africa Cup of Nations witnessed one of the most surprising moments as Equatorial Guinea, which looked weak on paper, knocked Algeria to the canvas and eliminated them from the competition. In this friendly, Guinea will be looking to repeat the feat and beat one of the toughest teams in Africa.
2:32 PM7 days ago

WHAT'S NEXT FOR GUINEA?

WHAT'S NEXT FOR ALGERIA?

The last duel played by the Algerian national team corresponded to the African Cup of Nations qualifiers, on day 2 of the Group Stage corresponding to group F. The duel was Tanzania vs Algeria at the Benjamin Mkapa Stadium. The Algerian team had a higher ball possession of 52% and a high percentage of shots on goal, so it was the master of the match, which was reflected in the scoreboard until the 45+2 minute with the goal of Rami Bensebaini and later sealed the victory 2-0 with the goal of AMoura
2:17 PM7 days ago

The last duel played by the Guinea national team was in the Africa Cup of Nations qualifiers, on day 2 of the Group Phase corresponding to group D. The duel was Guinea vs Malawi at the Stade Général Lansana Conté. The Guinea team had a higher ball possession of 73% and a high percentage of shots on goal, so it was the master of the match, which was reflected in the scoreboard until the 90+1' minute with a solo goal by Naby Keïta to give them the three points.
2:12 PM7 days ago

The wait for the FIFA date is over, the national teams are back in action to play their last matches before the World Cup in Qatar. For this match, Algeria and Guinea will face each other in an international friendly duel, both nations are out of chances to qualify for the Qatar 2022 World Cup, so both teams are already preparing everything for the next World Cup cycle and fight for the ticket to Mexico, the United States and Canada 2026.
2:07 PM7 days ago

Do not miss a detail of the match with the live updates and commentaries of VAVEL. Follow along with us all the details, commentaries, analysis and lineups for this Algeria vs Guinea match.
2:02 PM7 days ago

What time is Algeria vs Guinea match for friendly match?

This is the start time of the game Algeria vs Guinea of 23th September in several countries:

Watch out for this player from Guinea:

The player to watch for this match will be the star striker, Ismaël Bennacer, the current center forward has been an important piece in his national team and has proven it by becoming the ally of the goal for his team, now, he will look to break the nets and be the difference that balances the balance in favor of his team. 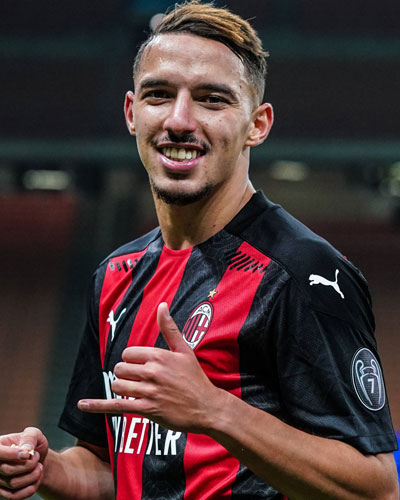 Watch out for this Algeria player:

The player to watch for this match will be the star striker, Aguibou Camara, the current center forward has been an important piece in his national team and has proven it by becoming the goal ally for his team, now, he will look to break the nets and be the difference that balances the balance in favor of his team. 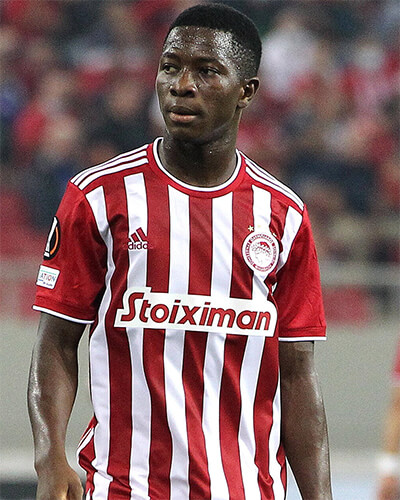 Algeria and Guinea have only met on eleven occasions (4 wins for Algeria, 3 draws and 4 wins for Guinea) where the scales are totally balanced. In goals, it is the Algerian team who has the advantage with 17 goals scored to 13 scored by Guinea. Their last meeting dates back to the 2019 Africa Cup of Nations where Algeria beat Guinea 3-0 in the round of 16 of the competition.
1:32 PM7 days ago

The Oran Olympic Stadium is a Stadium located in the city of Oran, Algeria and has a capacity to hold a total of 40,143 people in its seats, in the future it is planned that this sports venue will be the new home of MC Oran, a soccer team that plays in the First Division of Algeria. In addition, future plans for the stadium include renaming it Stade Abdelkader Fréha in honor of the legendary MC Oran footballer Abdelkader Fréha.

The inaugural match of the stadium was held on June 17, 2021, when the Algerian National Team defeated Liberia 5-1 in a friendly match, making this automatically one of the most luxurious Stadiums in Algeria and on the African continent.

The national team of Guinea did not manage to fight for a ticket to attend the next World Cup in comparison to Algeria, in fact, Guinea did not have a good end of the qualifiers because in the most recent African Cup, the national team of Guinea lost in the round of 16 against Gambia by the minimum difference in the scoreboard, also, in the qualifiers for the next African Cup of Nations, they started on the wrong foot by losing against Egypt by the minimum, however, they could recover on the second matchday and beat Malawi by a 1-0, which keeps them alive to qualify to the next round. This duel will help them to see their mistakes as they face a great opponent, and to improve both individually and collectively.
1:22 PM7 days ago

The Algerian national team failed to qualify for the World Cup to be held in Qatar 2022 in a few months, after having lost in the African qualifiers against Cameroon in a great round-robin duel that ended 2-2 on aggregate but favored Cameroon due to the away goals factor. After the elimination, Algeria played the group phase corresponding to the African Cup of Nations qualifiers, duels that they both won without problems, remaining at the moment as group leaders and almost already thinking of obtaining that qualification. For this duel, Algeria will be looking to rotate and see what will be their selection in the future in the quest to qualify for the next World Cup.
1:17 PM7 days ago

The last FIFA date prior to the World Cup

The last FIFA date prior to the Qatar 2022 World Cup kicks off, the teams that managed to qualify for the World Cup will have the opportunity to play two preparation matches to define their 23 selected teams that will have the opportunity to go to the anteroom of world soccer, while, for the teams that unfortunately could not qualify, they will have these matches to sow their bases for the future and fight for a place in the next World Cup. In this duel, Algeria and Guinea, teams that missed out on a ticket to Qatar, will play a friendly match where they will try out several new options for the future, as there is a large margin for error and these duels will not have a direct impact on the outcome.
1:12 PM7 days ago

The Algeria vs Guinea match will be played at Oran Olympic Stadium, in Oran, Algeria. The kick-off is scheduled at 15:00 pm ET.
1:07 PM7 days ago

Welcome to VAVEL.com’s LIVE coverage of the Friendly Match: Algeria vs Guinea!