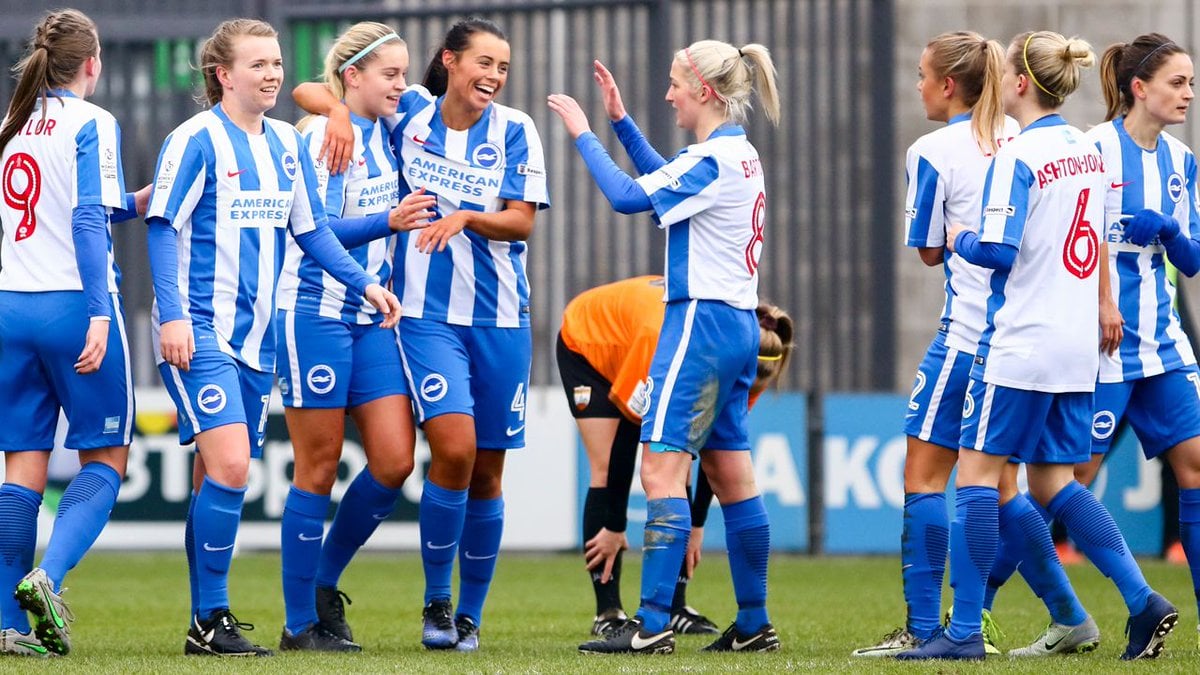 Brighton compete in the Women’s Super League and are managed by former England coach Hope Powell. They play their games at the People’s Pension Stadium, home to Crawley Town in the men’s game.

Brighton were founded in 1967 as ‘Brighton GPO’. This team was created by workers at the Post Office’s telephone exchange. They were one of the founding six members of the Sussex Marlet Women’s League in 1969 - which has now transitioned into the South East Counties Women’s Football League, and in that same year, the Women’s Football Association was founded. In 1975/76, they reached the Women’s FA Cup semi-final but were beaten by Southampton. The seagulls faced Doncaster Belles’ predecessor, Belle Vue Belles, in the third-place playoff, which was weirdly played immediately after the final between Southampton and QPR at Bedford Town FC.

Their rise scooped them a sponsorship deal with local sports retailer Clapshaw and Cleave Sports, who became known as C&C Sports during the 1979/80 campaign. The company became affiliated to Brighton & Hove Albion FC in 1990 following the initiation of the Seagulls’ Football in the Community scheme. This was shortly before a change to the English league system, with the club joining the National League Division One South the following year.

In 1995 the club won the inaugural Sussex Women’s Cup, and they would go on to find themselves with 17 triumphs in the competition. They also played in three matches at the Goldstone Ground, the old home of Brighton’s men’s side, in games against Milton Keynes, Horsham, and Whitehawk in the Sussex Women’s cup semi-final.

Before the super league

The Albion saw a short-lived stint for themselves at the turn of the millennium which saw them compete with the biggest teams in England every single week, but they were soon back to playing in the second and third tiers of football.

Women’s Football changed to a summer season following the introduction of the first Women’s Super League in 2011, and a second-tier was added only three years later (WSL 2). The Seagulls applied for a license to join this, but they were unsuccessful in their bid to make the move.

Their league status did not deter supporters either, and 3,256 flocked our to watch them and set a record attendance for the Women‘s Premier League in 2015. The season later, a 4-2 playoff victory against Sporting Club Albion (now West Brom) secured the team a place in the WSL 2, their first in the WSL pyramid for the first time. In 2015, they set out a 5-year plan to reach European Football, with heavy reliance on their important Centre of Excellence to work up young talent. At the time, Manager James Marrs told BBC Sport this:

“Our first target is WSL 2 and, if that happens, our next target is WSL 1 and then aim for Europe from there," Marrs continued. "It has to be the ultimate aim.

"Even if it isn't to be this season, we've had a fantastic year and exceeded expectations. I'm absolutely delighted.

"We've still got a chance to win the league. We've got to rely on other results, but if you had said to me this time last year that we would be where we are now, I'd have bitten your hand off."

The summer league works in other countries, but the FA chose to revert this to a more conventional system, and the move back to a winter campaign was made. These changes meant that they had to wait nearly 15 months without promotion or relegation, playing in the spring series, waiting for their WSL debut. During this period of time, former men’s midfielder George Parris took interim charge before Hope Powell was appointed in 2017.

Their only season in the second half saw them finish runners up behind eventual title winners Doncaster Belles.

Another reformation of the league system was set in place at the end of that year. The top flight was to go fully professional, and so promotions were void and clubs had to reapply for their licenses. Controversially, Brighton earned their spot in the top flight, but Doncaster Belles’ place was taken by West Ham United.

In their first year in the WSL, Brighton finished in ninth place on a mere sixteen points, which if Yeovil Town had not entered administration would have seen them be only three points above the drop straight back down to the now-championship. They made a number of transfers ahead of the 19/20 campaign to try and solidify their spot in a division strengthened by its promoted sides.